Two rabbis, from two different denominations, get a second chance at love 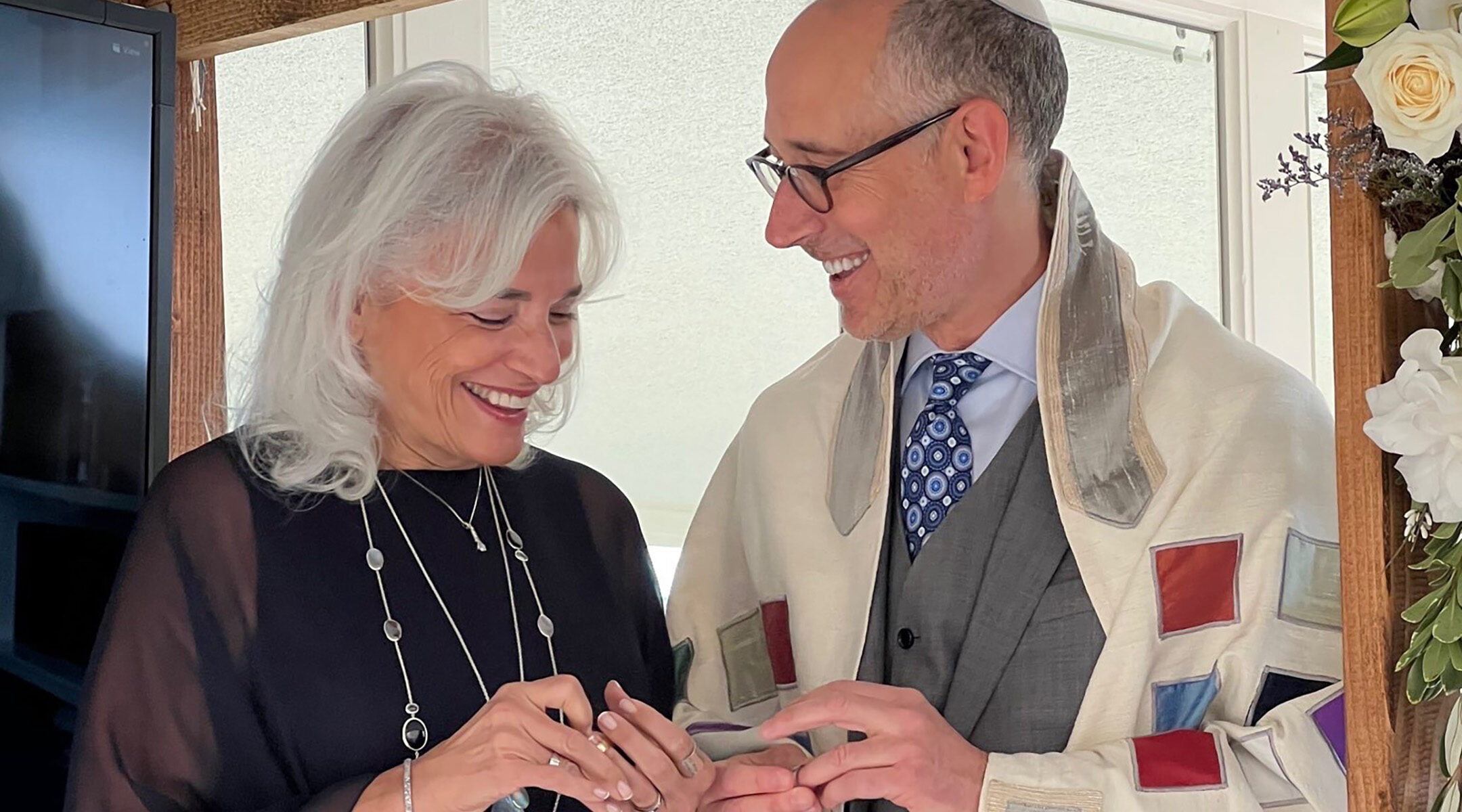 Nether Rabbi Amy Wallk nor Rabbi Mark Cohn had been looking for a relationship when they first met at the Shalom Hartman Institute in 2017. (Tamar Katz)
Advertisement

(JTA) — In the beginning, the relationship was secret. Neither Rabbi Amy Wallk nor Rabbi Mark Cohn wanted to worry their respective congregations, especially when they still had so much to consider. Wallk’s sister joked it was like she had joined the C.I.A.

But eventually they realized this relationship was the real deal, and the time had come to make some serious choices. Wallk served Temple Beth El in Springfield, Massachusetts, and Cohn was at Temple Emanuel in Winston-Salem, North Carolina. One or both of them would have to relocate if they wanted to be together.

It wasn’t the sort of decision either expected to be making at this stage in their lives.

After her divorce, Wallk gave little thought to new relationships. She was far more cognizant of the personal example she wanted to set for her three children. “I felt it was better to be lonely and divorced than lonely and married,” she said. “I felt I could be a better model for my children being alone than in a bad marriage.”

With this in mind, and newly single in her mid-50s, she wanted to be more intentional about putting herself first. In this case, that meant nurturing her religious and spiritual life — which is why she ended up in Jerusalem at the Shalom Hartman Institute’s Rabbinic Leadership Initiative seminar in the summer of 2017, a three-week oasis of study, learning and Jewish exploration.

Also present among the 125 or so rabbis was Cohn, who was only there for five days. He was also newly divorced. The two met one day over lunch, when Wallk sat down at a table where she had friends, where Cohn was also seated.

Though Wallk is a Conservative rabbi and Cohn is Reform, they quickly realized they had much in common. Both loved prayer, and each had worked on revamping their movements’ new prayerbooks. In addition to having recently ended decades-long marriages, they were both parents, and each had lost a parent in the past few years. They spoke once more before Cohn left, and it was clear they had a connection. But neither had been looking for a relationship, and the 700 miles between them back home made it impractical to consider pursuing one. They exchanged a few emails in the immediate weeks that followed, but that was it.

Then, six weeks after returning to the States, they met again at an AIPAC rabbinic seminar in Washington, D.C. This time, they realized their desire to get to know each other better might outweigh the impracticalities of living so far apart.

They began to visit one another. Their communication increased. At one point, they shared the eulogies they had each written about the parent they had recently lost.

“You could see the distance between us as an obstacle or a benefit” said Wallk. “And I chose to go the benefit route. When I was at home, my children got my undivided attention.”

But still, they knew they had to be cautious. Dating as a rabbi is always tricky, and that doubles when both people in the relationship have their own congregations. Some members of Wallk’s congregation had voiced their fears of losing her after the divorce, and neither of them wanted to raise concerns in their synagogues until they knew the relationship was serious.

“We had a lot of things on the stovetop,” said Cohn. “Once we knew this was something, we needed to think about the kids, our careers and what we wanted.” 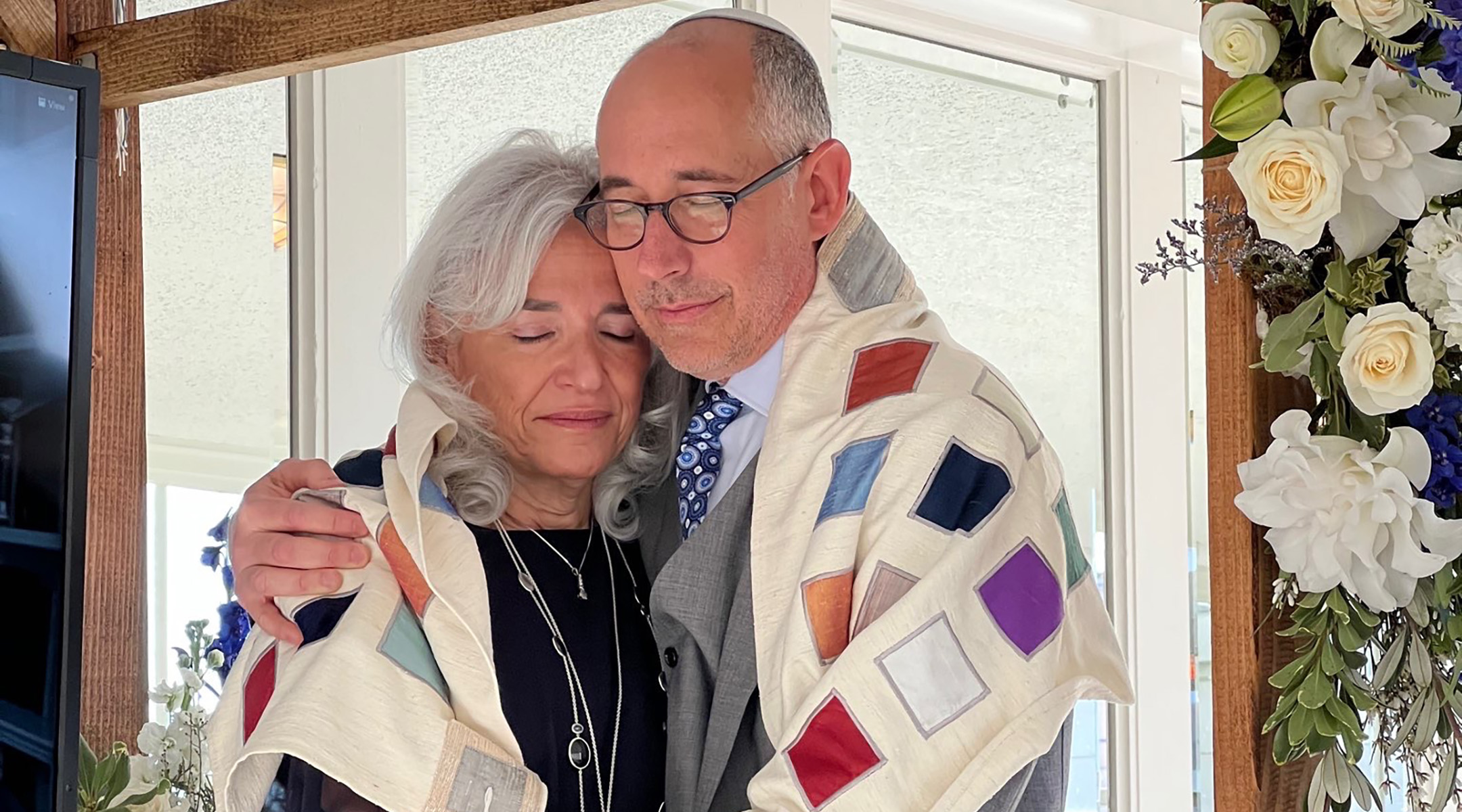 Wallk and Cohn were married on Jan. 2, 2022 at San Francisco’s Fairmont Hotel, in front of 17 guests. (Tamar Katz)

“The full-time pulpit rabbinate is, necessarily so, demanding and needs full attention. If we are both doing that work in different communities, we would be limited in time,” said Cohn, adding this would be particularly true of starting at a new position, which would demand extra efforts to get up and running. “We were concerned we wouldn’t have the kind of time together we desire.”

Of the two, Cohn had been at his congregation longer, 21 years to her 14. He felt he had accomplished much of what he set out to do when he took over the small-town pulpit, he said. He had officiated at over 200 b’nai mitzvahs, forged relationships with other local clergy members and overseen many social justice projects.

“I was the one who was ready to move,” said Cohn. “I’ve got a remarkable bride who I happen to really respect as a rabbi. I’ve been in her synagogue, and I love being a Jew in the pew there.”

Once that was settled, the pieces quickly fell into place: Wallk and Cohn were married on Jan. 2, 2022 at San Francisco’s Fairmont Hotel, in front of 17 guests.

The location was an easy choice, as Cohn’s family has been in the Bay Area for generations, and it is where his mother, the only living parent of either of them, still lives. Additionally, multiple members of Cohn’s family have been married at the Fairmont, which used to be owned by Jewish philanthropist Ben Swig, who was also the named benefactor of the Reform Jewish summer camp that Cohn attended for many years.

Narrowing in on an officiant was harder. Their social circles had no shortage of rabbis, but few who knew both of them as individuals.

Ultimately, they decided on Rabbi David Ellenson, a leader of the Reform movement and now chancellor emeritus of Hebrew Union College-Jewish Institute of Religion. Wallk had met him in her early years in rabbinical school at the former University of Judaism, now American Jewish University, in Los Angeles, and Cohn first took a class from him when he was an undergraduate at U.C.L.A., and has considered him a mentor ever since.

“He’s the only rabbi in the whole country that knows us each as individuals and knows our families and our stories,” said Cohn.

Ellenson officiated from New York, projected on a big screen. “A gift of Covid,” they said, as the remote participation meant it didn’t matter if Ellenson was traveling during the wedding date, since he could officiate from anywhere.

In July, Cohn will move to Springfield, and Rabbi Charlie Cytron-Walker will replace him in Winston-Salem. (Cytron-Walker is the rabbi who was taken hostage during Shabbat services at his synagogue in the Dallas area earlier this year.)

Cohn doesn’t know what’s next for himself yet, but he’s excited to find out. With his passion for environmental issues as well as social justice, he could see working outside of the Jewish world, perhaps for a non-profit, though there are many more Jewish options in Western Massachusetts than there are in North Carolina.

What he does know is that for the first time, he will live in a house with a strictly kosher kitchen. Though Cohn himself follows “Biblical kashrut,” in general the two overlap in religious practice. “She’s on the more liberal side of the Conservative movement and I’m on the more traditional side of Reform,” he said.

Like other mixed-movement rabbinical couples, they have learned to appreciate things about the other’s movements.

“We’re modeling a kind of Torah that isn’t modeled very often,” said Wallk, noting that women were traditionally expected to prioritize their husbands’ career over their own, and that people in general often put their careers above all else. “There are times when your career comes first, but you only get one life to live, and you have to take care of yourself. This decision of Mark, moving to be with me and finding work, is saying ‘we have to come first.’”