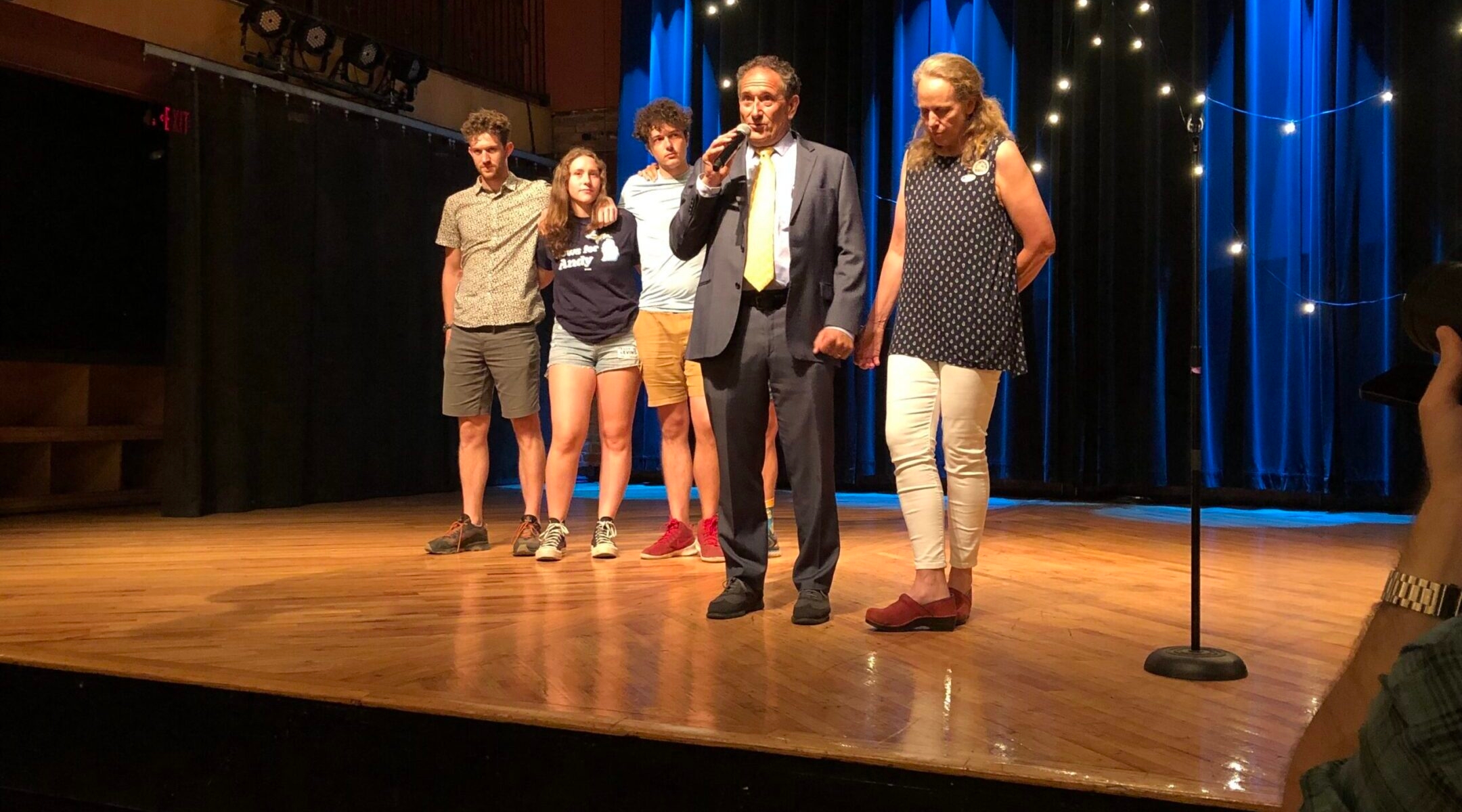 Flanked by his family, Rep. Andy Levin concedes in his reelection campaign at an event in Pontiac, Michigan, Aug. 2, 2022. (Andrew Lapin)
Advertisement

Stevens’ decisive win concluded a bank-busting primary that attracted more than $4 million in pro-Israel outside spending to a face-off between two incumbents in the Detroit suburbs.

“She ran a strong campaign,” Levin told his supporters. “My hat’s off to her.” He pledged to support Stevens in the general election.

In his concession speech, Levin did not mention the role that spending by the political action committee founded this year by AIPAC, the pro-Israel lobby, played in his loss. But he did mention that Stevens’ supporters outspent his own by a factor of five to one, thanks to “outside money.”

Stevens drew significant support from a PAC founded to support women candidates and was seen as favored from the beginning because of the new district’s map. But with nearly half of the outside spending coming from AIPAC’s PAC, United Democracy Project, the race also emerged as a battleground over U.S.-Israel politics — made more poignant as AIPAC backed the non-Jewish candidate over the Jewish one.

In addition to ending a Michigan Jewish political dynasty that has lasted since Levin’s uncle Carl was elected to the Senate in 1979, Levin’s loss means the wing of the Democratic party that is most critical of Israel is losing its most outspoken Jewish ally in the House of Representatives.

“Especially for young Jews, Andy was our candidate,” Levi Teitel, a local organizer with the Jewish pro-Palestinian group IfNotNow, told JTA. “He championed the issues we care about: climate justice, the need to forge peace between Israelis and Palestinians.”

For AIPAC, that result is something to celebrate. Despite drawing criticism for its spending in this year’s primaries, the first time the pro-Israel lobby has supported candidates directly, AIPAC has unapologetically stood behind the candidates it believes to be most beneficial to the U.S.-Israel relationship — even, as in Michigan’s 11th District, when it means opposing a Jewish incumbent.

Levin, who was backed by J Street, the liberal pro-Israel lobby, is vocally critical of Israel and authored a “Two-State Solution Act” this session that would restrict how Israel could use U.S. aid, has been in AIPAC’s crosshairs. AIPAC’s former director David Victor, a Detroit resident, called Levin “arguably the most corrosive member of Congress to the U.S.-Israel relationship.” He also said in a letter to prospective donors in January that “less engaged Democratic colleagues may take [Levin] at his word” on Israel because of his Jewish credentials.

In the waning days of his campaign, rather than try to win over the voters that AIPAC had sought to mobilize, Levin instead drew attention to his Israel politics. He held a rally with Vermont Sen. Bernie Sanders and Rep. Rashida Tlaib and did a virtual event with Peter Beinart of Jewish Currents, three figures who are critical of Israel and its treatment of the Palestinians and largely despised by the hardline pro-Israel crowd.

“I’m really Jewish,” Levin said on MSNBC last week. “But AIPAC can’t stand the idea that I am the clearest strongest Jewish voice in Congress standing for a simple proposition: that there’s no way to have a secure Democratic homeland for the Jewish people unless we achieve the political and human rights for the Palestinian people.”

On Tuesday night at the Crofoot Ballroom in Pontiac, volunteers and young campaign staffers wearing “Jews For Levin” shirts commiserated with Levin supporters of a variety of races and ages. Outside, the rock band Coheed and Cambria was playing a loud gig to a parking lot full of headbangers.

Though Levin was fighting a variety of uphill factors in the race, including a redrawn district that covered much of Stevens’ territory, his Jewish supporters laid the blame for his loss squarely on AIPAC’s spending.

“Andy is actually very close to the center of gravity of the American Jewish community,” Eva Borgwardt, a Levin volunteer who drove from her parents’ home in Missouri to knock doors for the campaign and who had written invective against AIPAC in red ink on her arm, told JTA. “This is an attempt from AIPAC to send a very clear message that if you are an American Jew for Palestinian rights, we will destroy you.”

Matt Nosanchuk, the president and executive director of the progressive Jewish group New York Jewish Agenda, is Levin’s brother-in-law and flew into Michigan to campaign for him. Nosanchuk said he was there as an individual, not on behalf of his group.

“Ultimately AIPAC may enjoy a victory in the short term, but I think they need to think hard about the political space they’re shutting down through their efforts and their money,” Nosanchuk said.

For its part, AIPAC was eager to claim victory Tuesday night, tweeting that Stevens was “the 10th AIPAC-backed Democrat to defeat a challenger who sought to undermine America’s partnership with our ally Israel.” (So far this year, one AIPAC-backed candidate has lost.)

The group added, “Being pro-Israel is both good policy and good politics!”

J Street, whose own PAC spent around $229,000 on Levin’s campaign, harshly criticized AIPAC’s role in the race in a statement. “While Rep. Levin is a proudly pro-Israel Jewish-American, AIPAC smeared him as ‘anti-Israel,’ ‘fringe’ and ‘hostile,'” the group said. “Instead of building sustainable bipartisan support for Israel, AIPAC has harmfully turned Israel into one of the sharpest wedge issues in American politics.”

AIPAC also poured more than $4 million into a different Michigan race, in the 13th District, to support Adam Hollier against a billionaire state senator, Shri Thanedar, who funded his own campaign and whom AIPAC considered a threat because he once introduced anti-Israel legislation. That race had not been called Tuesday night.