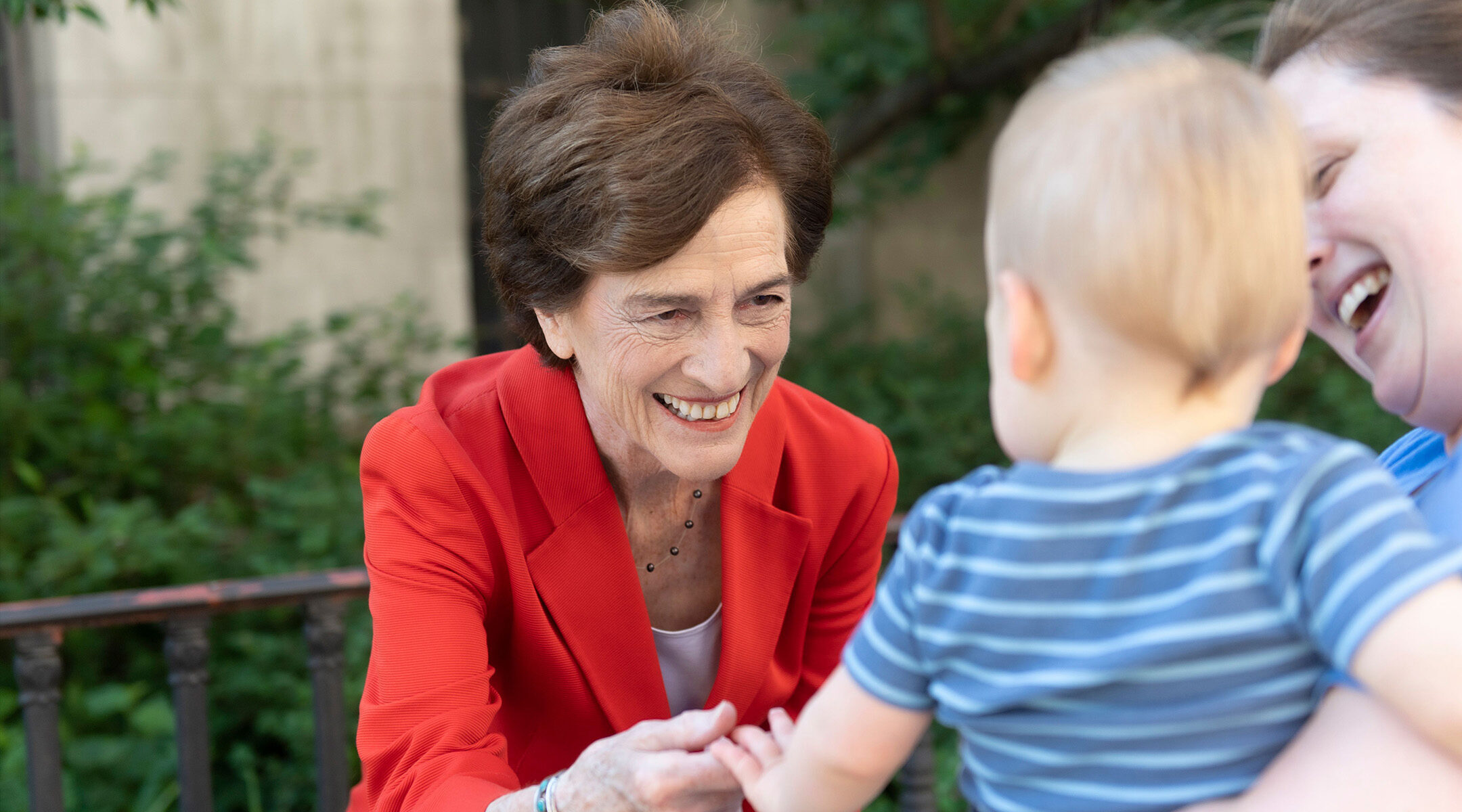 (New York Jewish Week) — Elizabeth Holtzman, the 80-year-old former member of Congress who took Nazis to task and played a role in impeaching former President Richard Nixon, scoffs when asked if she’s too old to run for a House seat.

“When they see me out campaigning in the sun, handing out leaflets, talking to the people, they know that I have the physical stamina, the mental stamina — and on top of it, I have a record of effectiveness that is needed at this time when our country is in such a danger,” Holtzman told the New York Jewish Week.

Holtzman is running in an already competitive race for the Democratic nomination in New York’s District 10, where she is facing off against a packed field of opponents that includes former federal prosecutor Dan Goldman, City Council member Carlina Rivera, Assembly member Yuh-Line Niou and Rep. Mondaire Jones.

Frontrunners Niou and Rivera lean left, while former federal prosecutor Goldman has fashioned himself as a moderate with millions of dollars of his own finances to use.

This has allowed Holtzman to find her own lane in between all of that, positioning herself as an experienced fighter who is from the district, and therefore has the district’s best interests at heart.

Before she was the oldest candidate running to represent the 10th District, she was once the youngest-ever woman elected to Congress at the age of 31, winning a House seat in 1972.

“People say Nancy Pelosi is too old for her job, but she’s very effective,” Holtzman said. “You can’t tell people that just because they are of a certain age that they can’t do a job.” 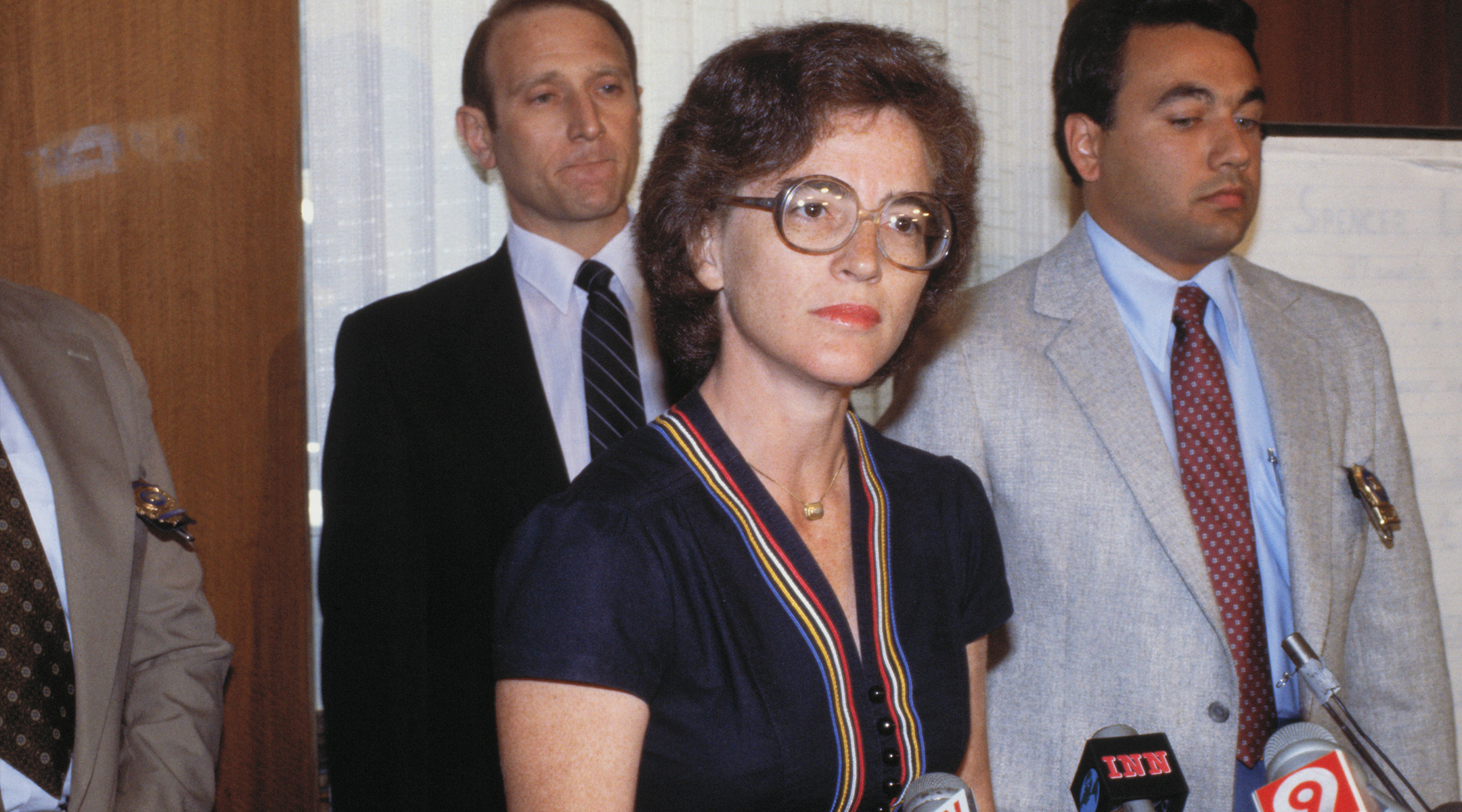 Elizabeth Holtzman, then Brooklyn District Attorney, standing at microphones during a press conference in 1982. (Bettmann/Getty)

Holtzman chalked it up to “good genes” as the reason has been able to maintain a career in politics over such a long period of time.

“I still use my mind,” Holtzman said. “I’m still a practicing lawyer. I wouldn’t be running if I couldn’t do the job.”

The candidate also has a Jewish pedigree to match the large swath of Jewish voters that make up the district, which stretches from Lower Manhattan to Park Slope and parts of Borough Park.

She grew up in Brooklyn after her family fled pogroms in Russia and Ukraine, and says that she credits Judaism as something that affected her “as a human being very deeply.”

“My grandfather risked his life to save Jews during the pogrom that followed World War I,” Holtzman said. “My brother and I got beat up on our way to Hebrew school growing up. I was exposed to virulent antisemitism at an early age. That’s the background.”

Holtzman marveled at the diversity of District 10’s Jewish population, speaking about how it ranges from secular Jews to Hasidic Jews to the entire spectrum in between.“This is something that energizes me,” Holtzman told the New York Jewish Week. “It’s what America is about. We all manage to live together in peace.” 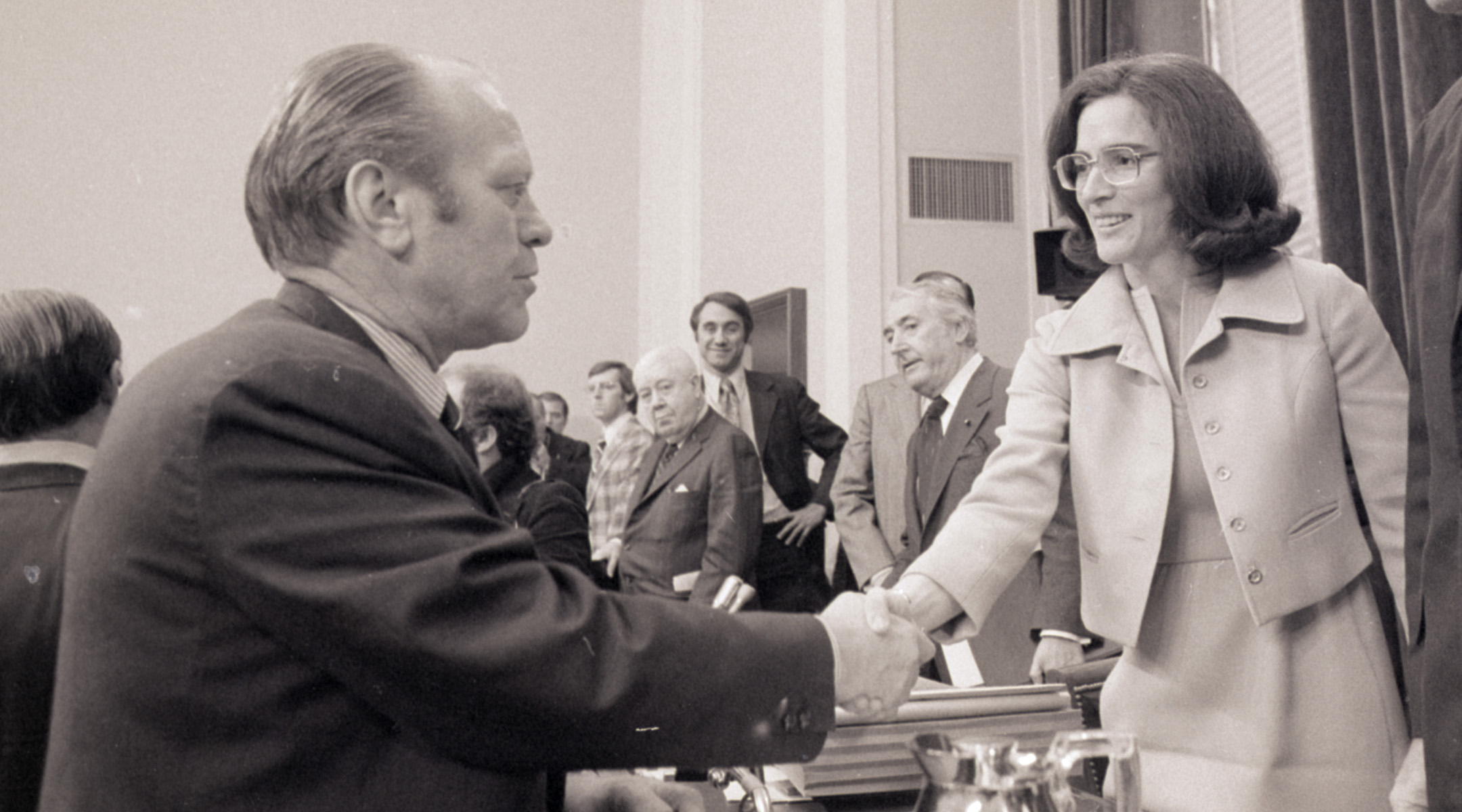 Former President Ford shakes hands with Former Representative Elizabeth Holtzman in 1974 after Ford completed his testimony to the House Judiciary subcommittee on his reasons for granting a pardon to former President M. Nixon. (Bettmann/Getty)

And yet, antisemitic hate crimes are on the rise once again New York City, a fact that isn’t lost on the candidate, who places the blame on former President Donald Trump for stoking the flames of hate across the country. Although Trump enjoys wide popularity in the Orthodox Jewish community, other Jewish critics say his seeming reluctance to denounce white supremacists led to a climate of intolerance.

“We had a president who supported antisemitism,” Holtzman said. “We need to have action taken against domestic terrorism and white supremacy, but the Republican party seems intertwined with it.”

Holtzman said that she decided to throw her hat into the ring after seeing the Supreme Court meant to overturn Roe v. Wade and witnessing the rise of white nationalism within the country. “I never thought I’d see something like Jan. 6,” Holtzman said, referring to the 2021 attack on the U.S. Capitol by pro-Trump rioters. “It’s very scary, but I have the expertise and the background and the guts to stand up to the right wing.”

Holtzman does have experience holding a person as powerful as a president accountable, as she was one of the House Judiciary Committee members who recommended impeachment against Nixon over the Watergate scandal.

And as a member of Congress, she wrote the Holtzman Amendment, which strengthened the ability to deport Nazi war criminals living in the U.S. She also forced the establishment of the Office of Special Investigations in 1979, leading to the prosecution of more than 100 Nazi war criminals.

While antisemitism is an age-old form of hate, Holtzman said that voters need leaders who will “condemn it unequivocally” in office.

Holtzman has also pledged to “fight crime while taking on police misconduct,” putting her somewhere between Goldman, who has positioned himself as a “tough on crime” candidate, Niou, who wants more police transparency and less protections for officers hiding misconduct.

I will continue to fight for innovative ways to combat the right-wing assault on gun control, threatening the lives of new Yorkers and all Americans every day. I will use the purchasing power of the federal government, which buys weapons from gun manufacturers for the military pic.twitter.com/TVUjh3uHEA

Holtzman said policing is a factor in fighting antisemitism, noting that “we can’t just abolish the police,” but admitted that there needs to be reforms on supervision, discipline and training.

“We’ve got to have a police force that people can rely on and trust,” Holtzman said. “People have this hostile adversarial view towards police, and I understand that. But the effort ought to be made to improve the situation.”

Holtzman said that “we have not faced up to our past” in America, and praised Germany and its handling of Holocaust memorials and education as an example to be followed.

“Learning about the Holocaust is critical to this,” Holtzman said. “But also learning about the genocide against Native Americans, about slavery, about the Chinese Exclusion Act. We have to understand that kind of damage and the horror that it caused.”

When it comes to the yeshiva debate taking place within New York over the last decade,  Holtzman supports “the right that people have to private religious education.” Advocates for reform say yeshivas are denying students adequate instruction in secular subjects like math and English, and want the city to release a long-delayed report assessing the schools. Yeshiva advocates insist setting their own curricula is a matter of religious liberty.

Like other candidates in the race, Holtzman is walking a fine line between the yeshivas and would-be reformers. “That’s part of what’s protected in the Constitution,” Holtzman said of the yeshivas’ religious liberty claims. “I’m not going to dictate anybody’s curriculum. I do believe all students must be able to learn basic subjects such as arithmetic, English language skills and science.”

However, she did state that she is said she is opposed to tuition tax credits — essentially, tax breaks for private educational spending.

“The effort to try to siphon off funds from the public school system has been going on for a long time in this country,” Holtzman said. “We have to admit that quality public schools are the bedrock foundation of our democracy.”

She also called herself “an environmentalist before they ever created that term,” pledging to cut back on subsidies for fossil fuel companies.“I think we have to find practical ways to deal with these problems,” Holtzman said. “Otherwise, we face planetary catastrophe. There’s no question about that.”

As an avid kayaker, I see the devastation of climate change constantly. Rising water levels, dead trees lining the short, killed by the salt water that now reaches them.

Washington needs to do pic.twitter.com/z5fFWodxHR

Holtzman faces a steep challenge, however, as the most recent poll released by her opponent Dan Goldman showed him as the frontrunner in the race with 18% of the vote. Trailing closely behind Goldman is Niou with 16% and Rivera with 14%.

Following them is Jones with 10%, and then Holtzman at 9%. However, the poll also showed that 18% of voters are undecided, leaving it a close match for all parties involved.

Holtzman has less backing than other candidates, but there are notable supporters, including feminist icon Gloria Steinem, and the editorial board at the New York Daily News.

She believes the voters will look at her record and decide she is the one to best represent them in the Aug 23 primary. “I’m sure that when people look at me and get a sense of what I stand for and the energy I bring to this, I think I’ll win this election,” Holtzman said.