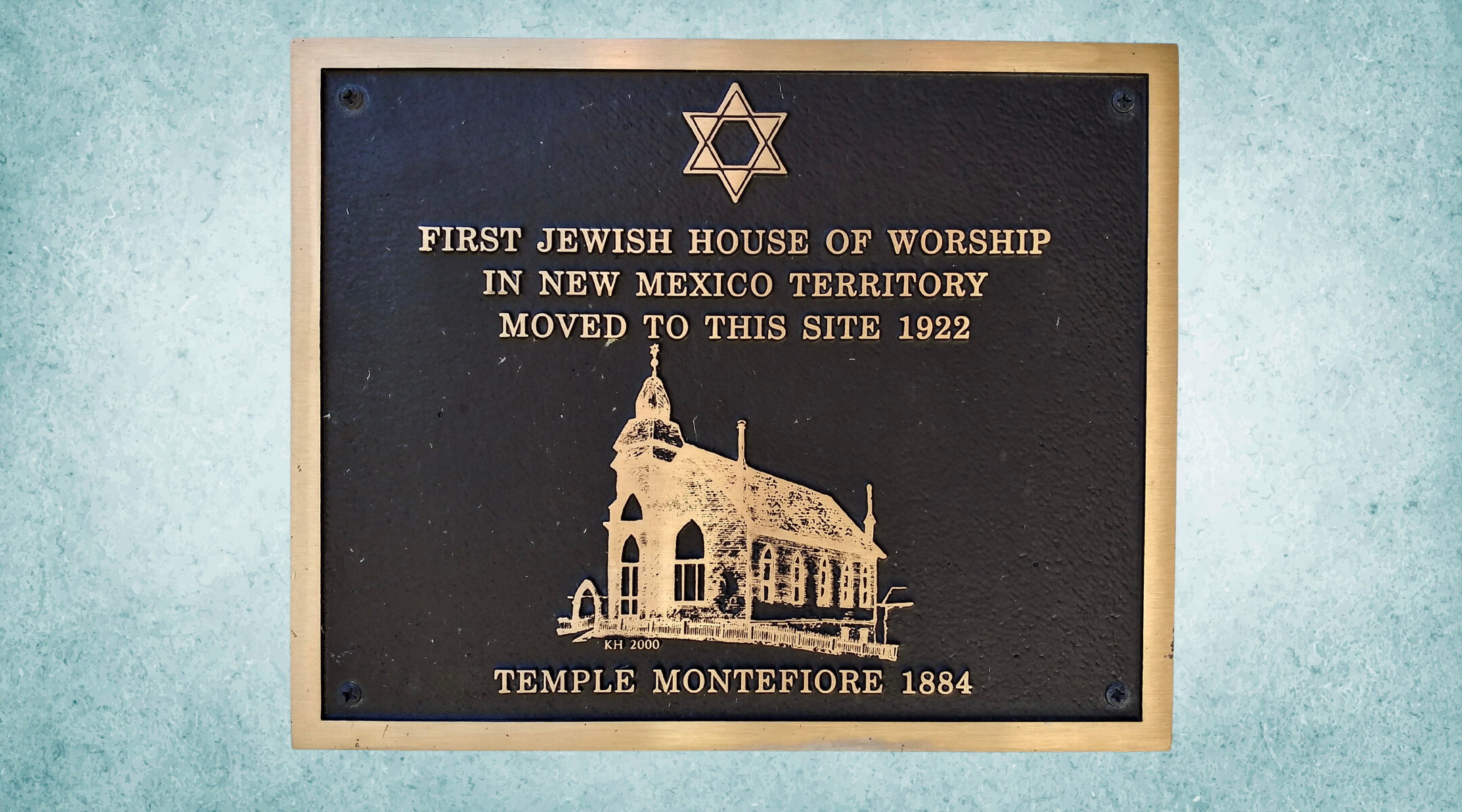 For the first time in more than 60 years, New Mexico’s oldest synagogue may be returning to Jewish ownership. (Photo courtesy of Jim Terr / Design by Jackie Hajdenberg)
Advertisement

That’s in part because the local Jewish community is tiny — Neal’s mother, Nancy Terr, recalls that when her family moved there in 1958, locals joked that they doubled Las Vegas’ Jewish population.

But it’s also because Temple Montefiore’s building has been a church since the 1950s.

Now, Terr and others in Las Vegas, New Mexico, a city of about 13,000 roughly an hour’s drive from Santa Fe, want to buy back Temple Montefiore, the first synagogue in the New Mexico Territory. They have launched a crowdfunding campaign to do just that, setting a goal of raising $200,000 by the end of September.

Already, they’ve raised nearly half of the goal, bringing in hundreds of donations from all over the United States and beyond after their plea spread on social media this week.

The Las Vegas Jewish Community, an official nonprofit since 2010 but an informal group for far longer, has been interested in buying the building for more than 20 years, Terr said. But it wasn’t made available for sale until last month, as the local archdiocese scales up its property sales in order to compensate survivors of sexual abuse by members of the clergy.

When the church announced that it would be selling the property, rumors swirled that a local university wanted to purchase the land and, well, turn it into a parking lot.

“That sent us into a tizzy to think of that going down,” said Terr, who says she has begun but not yet completed the application process to get Temple Montefiore on the National Register of Historic Places.

Dedicated the week before Rosh Hashanah in 1886, the synagogue building was established as the creation of the railroad brought Jewish merchants, mostly of German ancestry, out west.

Though Jews were never an outsize population in Las Vegas, they were well-regarded in the community. Half of the people who donated to the funds for the 1880s construction of the synagogue were not Jewish, according to “A History of the Jews in New Mexico” by historian Henry Tobias, and the synagogue’s opening was accompanied by a performance from a Presbyterian choir. The city’s mayor, Louie Trujillo, told the Las Vegas Optic in March, “This town would not be alive if it were not for the Jewish merchants who settled here in the 1800’s.”

In 1922, as the Jewish community continued to grow, the building was moved to another location a few blocks away. But by 1950, the population had fallen so much that the community could not sustain a congregation, and services at Temple Montefiore were canceled. The Las Vegas Bible Church purchased the building for $8,000 in 1957, but due to the need for extensive repairs, the church sold the building to the Santa Fe Archdiocese in 1964, and it is now in use as a campus Catholic community center at New Mexico Highlands University.

The local Jewish community benefited in the 1990s from a sudden phenomenon of people discovering their crypto-Jewish ancestry — Jewish families who converted to Catholicism during the Spanish Inquisition, but who secretly maintained Jewish customs — and embracing their Jewish heritage.

But for 65 years, local Jews have had to travel to Santa Fe, where there are multiple synagogues, for regular services. They have also rented the Temple Montefiore building for special events, according to Terr, but they had to cover crosses and other Christian symbols to do so.

The community today is small but still offers programming for Jewish locals, including Israeli dance lessons, social events, Hanukkah celebrations and cleanups at the historic Montefiore Cemetery, one of the first Jewish cemeteries established west of the Mississippi River. It also holds events for international students at United World College of the American West, a boarding school that is part of a network initially funded by the Jewish businessman Armand Hammer.

Diana Presser, the group’s former secretary who moved to Las Vegas in the 1990s after visiting and falling in love with the small city, has been involved in the Jewish community ever since.

“For me, the Jewish community is a real blessing,” said Presser, who estimates that there are 20 Jews living in Las Vegas. A core dozen of them, she said, have organized services over the years, sometimes using a visiting rabbi and sometimes on their own, in community members’ homes or in rented spaces.

Now they have embarked on a much more ambitious effort — to raise the funds needed to take back ownership of Las Vegas’ historic synagogue. The group has gotten one bridge loan for the synagogue buyback; it also got some funding for its general operations from the Jewish Federation of New Mexico before that group faced turmoil amid allegations of harassment and mismanagement against the CEO. (Terr is a current board member, according to the federation website.)

This week, the Las Vegas Jewish Community launched a GoFundMe that, as of Thursday, had raised nearly $100,000. Support has come in online and locally from Christians who want to see the community thrive, Terr said, noting that they would benefit from having access to local Hebrew classes. The group is increasingly confident that it can buy the building — but the cost of maintaining the 136-year-old building remains a concern.

The group has some models to take inspiration from. Just last month, the Jewish community of Helena, Montana, closed a deal with the Catholic Church after a months-long effort to buy back the state’s first synagogue — also supported in part through crowdfunding. In a ceremonial signing Aug. 26, the building was handed back over to Montana’s Jewish community. Terr hopes her community in Las Vegas will have a similar outcome and cooperation from the church.

“It’s always been a dream to have it back,” Terr said about Montefiore Temple’s building. “Wouldn’t it be great to have that?”