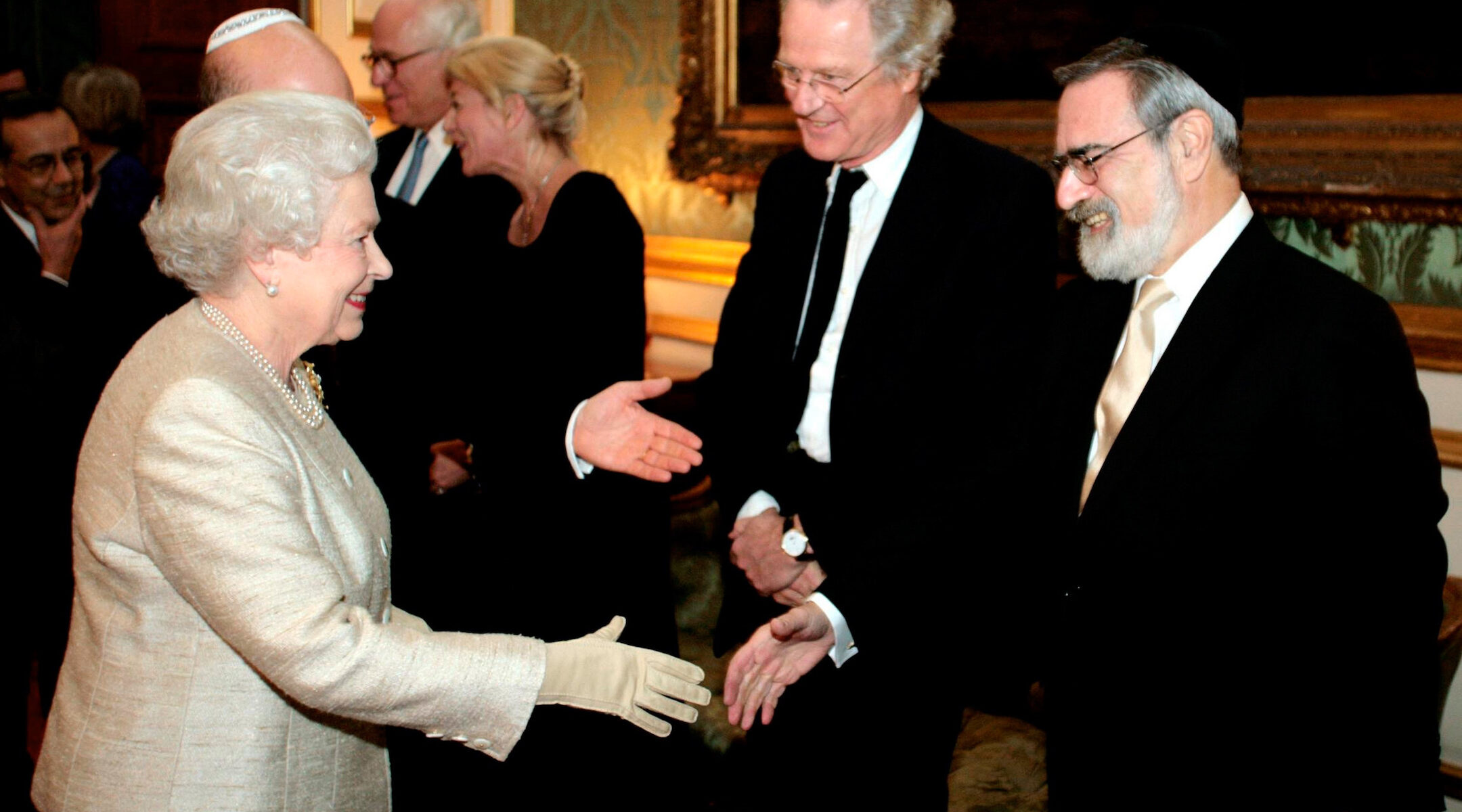 (JTA) — I am one of those people who gobble up films and television shows about the royal family almost as soon as they come out. And yet, watching “The Crown,” my thoughts would run like this: “This is great television,” I would say after nearly every episode. “But remind me again why I should care what happens to these people?”

I’ve heard that befuddlement from a lot of friends in the wake of the outpouring of love and sadness that followed Queen Elizabeth’s death at 96 after a 70-year reign. A monarch with no power, a matriarch of a family with no real claim to fame other than their birthrights, she occupied a strange and unique position.

“If she’s just a celebrity… her death isn’t that important,” he continued. “If she had real power, her death IS important … but also it means the anger at her is justified.”

A number of pundits and historians took a stab at explaining why Elizabeth, and the British monarchy, matter. Historian Amanda Foreman Elizabeth said she “embodied what you might call the spirit of the nation” and “personified the essence and values of Great Britain.” Similarly, the current chief rabbi of the United Kingdom, Ephraim Mirvis, eulogized the queen by saying she “embodied the most noble values of British society.”

Rabbi Jonathan Sacks, Mirvis’ predecessor, had at one point praised Elizabeth as an interfaith champion, saying her meetings with faith leaders led the U.K.’s transformation into “a multi-ethnic, multifaith society.”

Sacks, Foreman and Mirvis suggest a few ways of thinking about Elizabeth beyond Mik’s dichotomy — as neither “ceremonial figure” nor culpable head of a colonial empire. As Sacks explained, Elizabeth wielded a kind of soft power by dint of her example, leveraging her ambiguous status to become “Defender of all Britain’s Faiths.”

Foreman and Mirvis, meanwhile, remind us that public figures can “embody” and “personify” values even when they aren’t elected or hold any real power. Elie Wiesel comes to mind. Although he was a gifted writer, his most important role was as an articulate survivor and witness to the Holocaust. When Wiesel died in 2016, at age 87, the grief was not just over the loss of one man, but of a living connection to a monumental and devastating historical event.

With Wiesel’s death, Jewry also lost a unifying figure: When he died, JTA published an article asking if anyone could replace Wiesel as a “consensus leader” among American Jews, or was the “American Jewish community too divided to unite under any one person’s moral voice?”

Wiesel also wielded a degree of soft power, seen when he rebuked U.S. President Ronald Reagan for a planned visit to an SS cemetery at Bitburg, Germany.

Elizabeth, too, was a living link to World War II, and as such also personified everything Britain was and became in the ensuing eight decades. If indeed she “embodied” the nation’s values, she also deserved scrutiny for how she confronted its failings. In a Washington Post essay, foreign affairs columnist Ishaan Tharoor concedes that “Elizabeth was perhaps not privy to all the sordid details of the operations carried out to preserve her empire after the end of World War II and through the 1960s.” And yet, he suggests, “Elizabeth cast herself as the happy steward of the Commonwealth” whose “history was hardly benign.”

(Wiesel too faced criticism that despite his devotion to human rights and dignity, he did not grapple publicly with the costs of Israel’s control of the West Bank and Gaza.)

There is, however, another way to think about the queen’s significance: as a sort of religious figure. Not a religious leader, and not a god exactly, but as an intermediary between profane humans and divine aspirations. In a prayer in memory of the queen, Mirvis wrote: “In an age of profound change, she signified order and justice; and in times of tension, she offered generosity of spirit.” That’s as good a definition as any for the function of religion.

Americans don’t have monarchs, but we do have what Robert Bellah calls the American civil religion, with “its own prophets and its own martyrs, its own sacred events and sacred places, its own solemn rituals and symbols.” Such rituals and symbols represent the purposes and the meaning of a nation.

In our case, those symbols include the Stars and Stripes, the Statue of Liberty, the national parks, late leaders who stood for something bigger than themselves. We put bald eagles and dead presidents on our coins; in England, they put their queens and kings.