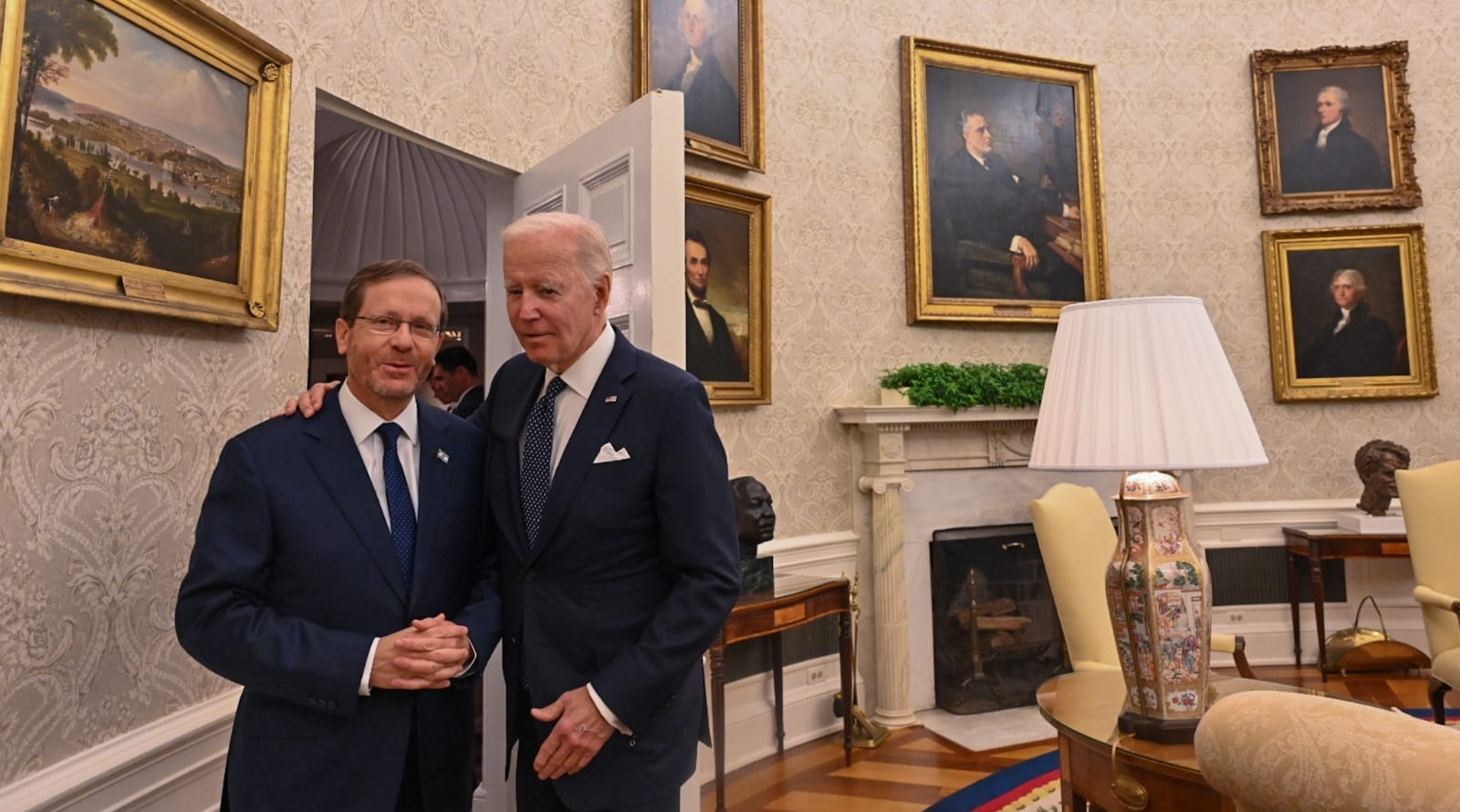 WASHINGTON (JTA) — Israeli president Isaac Herzog had a message and stuck to it: Israel and the United States are on the same page no matter who wins elections in both countries next month.

“We have elections in Israel, and you’re having midterm elections in the United States,” Herzog told President Joe Biden in the public portion of their meeting Wednesday in the Oval Office. “But one thing is clear — and I think this visit epitomizes it best — is that our friendship and strong bond transcends all political differences and opinions and parties.”

Herzog made the same point Tuesday evening when he met with Nancy Pelosi, the U.S. House of Representatives speaker who is scrambling to preserve her slim majority against the odds in midterm elections that favor Republicans. He made it again when he spoke privately with Jewish leaders on Tuesday, when he made calls to Republican congressional leaders and when he spoke to the media on the White House driveway.

An official close to Herzog said the Israeli president was impressed by how deeply committed Biden was to combating antisemitism; talk of its intensification in recent years dominated much of their meeting. “There’s no doubt it preoccupies the president,” the official said.

However much Herzog insisted that the U.S. Israel-relationship transcends partisanship, his visit amounted to an appeal to both electorates to keep the sitting government in place,

The Biden administration wants to reinforce its pro-Israel bona fides in a season when pro-Israel votes could help decide the Senate. Meanwhile, Israeli prime minister Yair Lapid is eager to prove to Israelis that he handles the U.S. file better than his predecessor and would-be successor, Benjamin Netanyahu.

Republicans campaigning in states where pro-Israel voters may play a deciding role in at least three Senate races are attacking Democrats as abandoning Israel. Pelosi and Biden cozying up to Israel’s president sends a message that Democrats will not be outdone in defending the Jewish state. Both Pelosi and Biden have long-standing friendships with Herzog, and both launched their meetings with warm recollections of visits past.

“I was bragging to the president — I have been presented by the president with the Israeli Presidential Medal of Freedom which is behind me over there,” Biden said in the Oval Office, referring to his visit to Israel this summer. “We’re very proud of that. So thank you for that honor.”

After her meeting with Herzog, Pelosi announced that she and Sen. Chuck Schumer, the Jewish New York Democrat who is Senate majority leader, invited Herzog to address a joint session of Congress next spring, when Israel will mark 75 years of independence.

“The United States Congress has been proud to stand in solidarity with Israel on a bipartisan and bicameral basis,” their letter to Herzog said.

And while Herzog’s status as president ostensibly places him above the political fray — the one-time leader of Israel’s Labor Party formally quit the party the day he was sworn in as president — he is close to the government led by Lapid, whose success next month would keep from returning to power Netanyahu, Herzog’s former nemesis. In all his appearances, Herzog emphasized the current Israeli government’s tough posture in Iran, making a pointed contrast with Netanyahu’s campaign-trail claim that Lapid is not robustly opposing Biden’s effort to reenter the Iran nuclear deal.

An official close to Herzog said the timing of the visit was coincidental; Biden and Herzog, whose close friendship long predates their presidencies, had originally planned to meet in September during the United Nations General Assembly, but the timing did not work out.

Nonetheless, once Herzog’s protestations of nonpartisanship were out of the way, his talking points reinforced a narrative that the Lapid government was a success story. Biden and Herzog both heralded the signing scheduled Friday of an agreement between Lebanon and Israel determining maritime borders. Netanyahu is saying the agreement leaves Israel vulnerable and has accused Lapid of capitulating to American pressure.

Biden framed the agreement as a security success for Lapid that elicited from one of Israel’s most implacable enemies in the region an implicit recognition of its existence.

“Tomorrow, Israel and Lebanon are going to sign an agreement to establish a permanent — a permanent — maritime boundary between  the two countries,” Biden said in the Oval Office. “I think it’s a historic breakthrough — it took a lot of courage for you to step up and step into it, and it took some real guts, and I think it took principle and persistent diplomacy to get it done. And I compliment you and I compliment the government.”

Officials from both sides also focused on the Biden administration’s efforts to expand the Abraham Accords, the 2020 normalization agreements between Israel and four Arab states. Herzog and Antony Blinken, the U.S. Secretary of State, met Wednesday. A State Department release said they “discussed opportunities to expand and deepen Israel’s relations with Arab states, as well as the continuing unprecedented work of the Negev Forum,” a meeting of Israel and Arab allies that Lapid convened earlier this year. Republicans have accused Biden of all but abandoning the Abraham Accords, which were struck during the Trump administration.

Herzog, in a public interview at the Atlantic Council offices with Dan Shapiro, the Obama administration’s ambassador to Israel, unveiled evidence reinforcing an American claim that Iran is selling Russia weaponized drones for its war against Ukraine.

“I want to point out that Iran has kept on supplying these drones and they are attacking all over Ukraine with suicide drones, special UAVs that are meant to create havoc in large scope,” Herzog said.

It was a way for Herzog to drive home the message that Iran for Israel remains an existential threat, which he did again in his meeting the next day with Biden, when Herzog raised the regime’s deadly response to women’s rights protesters in the country.

“This is an example of the way Iran is working, crushing its own citizens, moving toward nuclear weapons and supplying lethal weapons that are killing innocent citizens in Ukraine,” Herzog said. “The Iranian regime will be a major challenge we will be discussing.”

The official close to Herzog said that the Israeli leader did not feel the need to bring up the Iran nuclear agreement, brokered while Biden was vice president in 2015 and abandoned by former President Donald Trump in 2018. The Biden administration officials made clear that the deal talks were moribund for now; Iran had turned down multiple U.S. offers to reenter the deal, and the deadly repression of the protests along with Iran’s support for Russia meant that the deal is not now a priority.

In their meeting Tuesday with Herzog, Jewish leaders asked him about the prospects that Netanyahu would bring into government Itamar Ben-Gvir, an extremist weaned on the teachings of the late racist rabbi Meir Kahane. Herzog demurred, saying he did not want to discuss the makeup of the next coalition until after the election. Some Jewish groups have spoken out against courting Ben-Gvir, but a number have remained silent.