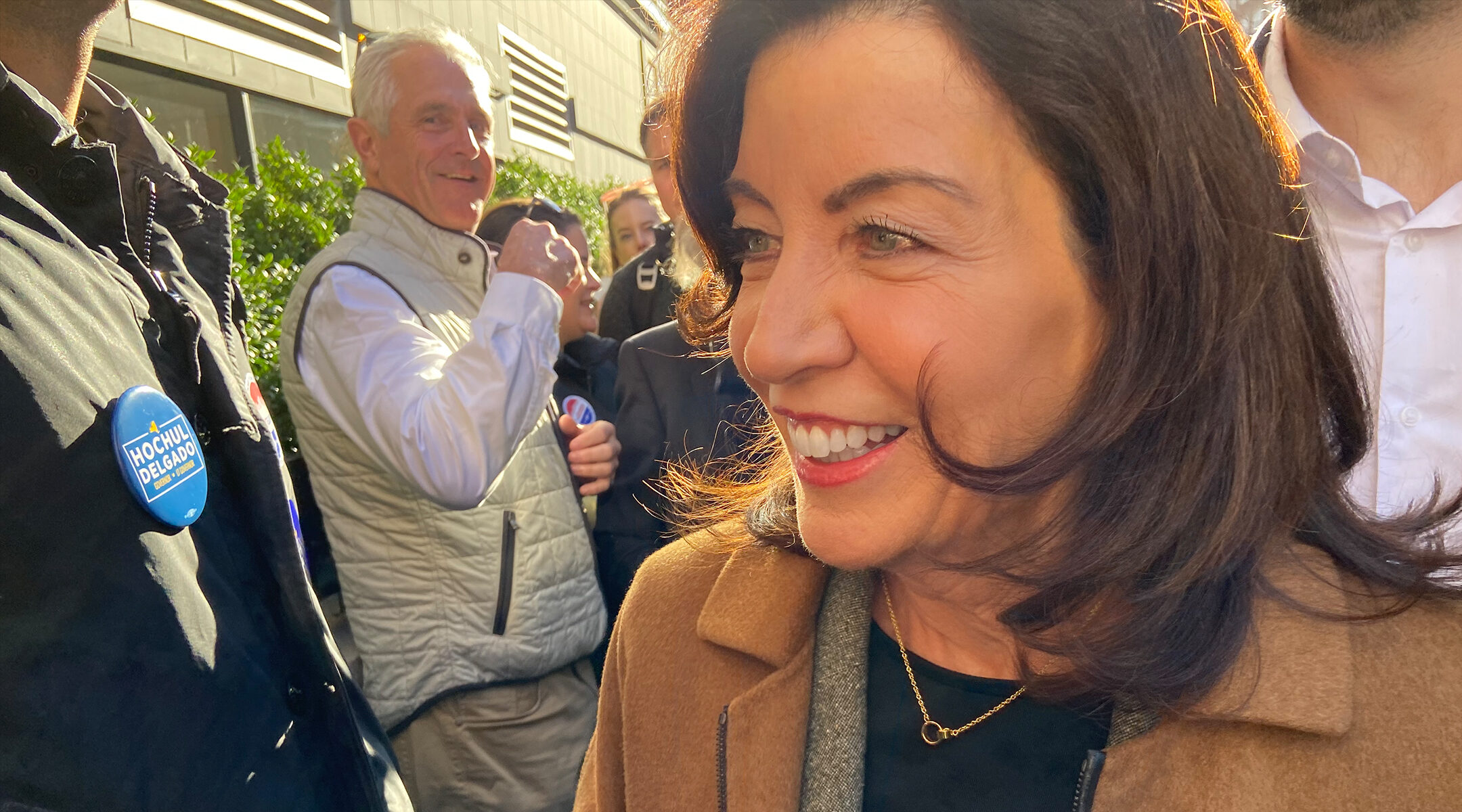 “Tonight, you made your voices heard loud and clear,” Hochul said in her victory speech at Capitale on the Bowery to a crowd of cheering supporters. “You made me the first woman ever elected to be the governor of the state of New York.”

.@KathyHochul takes the stage to RESPECT ahead of her victory speech pic.twitter.com/wZyacb1D1y

This will be the first full term for Hochul, who was lieutenant governor until her predecessor, Andrew Cuomo, resigned amid a sexual harassment scandal in 2021.

Hochul, who won praise from non-denominational Jewish community leaders as well as an endorsement from one major Hasidic faction, campaigned on protecting abortion rights and passing stronger gun laws, and could boast of beefing up penalties for hate crimes as well as funding for security at targeted institutions.

Zeldin, who voted against certifying the 2020 presidential election, went hard after Hochul on issues like crime and the economy, and courted Orthodox voters by promising a hands-off approach to yeshivas whose instruction of secular subjects is not matching state standards.

The outcome raises questions about the influence of the Hasidic voting bloc, which is widely seen as monolithic and powerful but in reality is more nuanced. Hochul had the official endorsement of the Satmar sect, but Zeldin rallies in Orthodox Brooklyn were packed and high-energy. Now, Zeldin supporters in those communities will have to work with a governor whom they opposed on issues including oversight of yeshivas.

While the race appeared to be tight as the campaign came to a close, Hochul won big in Manhattan with 82.4% of the vote. Meanwhile, Zeldin took Staten Island with 66.9% of the vote.

Other wins for Jewish politicians across New York were as easy as predicted.

Rep. Jerry Nadler will continue his over 30-year career in public service after being elected to another term in the House, representing the newly redrawn 12th Congressional District, which merges the Upper West Side and Upper East Side.

Former federal prosecutor Dan Goldman officially locked up his bid in New York’s 10th Congressional District, which includes Lower Manhattan and parts of Brooklyn, and which saw a battle between 10 candidates in one of the city’s most heated primary races.

Democrat Daniel Rosenthal, a high-profile Orthodox Assemblymember in Queens who supported Hochul, was reelected in the 27th Assembly District.

In Staten Island, Jewish Democrat Max Rose lost his bid for election against Republican Nicole Malliotakis in New York’s 11th Congressional District. Rose sought to reclaim the seat he lost to Malliotakis in 2020, but fell short in one of the city’s most Republican districts.

“One election alone does not define the trajectory of this country,”said Rose in his concessions speech. Swastikas were drawn on some of Rose’s campaign signs in the weeks leading up to election day.

Rep. Sean Maloney, the Democratic incumbent in New York’s 17th District, trailed Republican Mike Lawler in a Rockland County area with a large haredi Orthodox community. President Joe Biden involved himself in this race, calling Hasidic leader Rabbi David Twersky and urging support for Maloney. The president’s intervention suggested how seriously Democrats were taking the Republican surge in the state and the power of the Orthodox vote.

Earlier on Tuesday, Hochul was seen campaigning through New York City, starting her morning in the Upper East Side and later meeting voters in Woodside, Queens with Rep. Alexandria Ocasio-Cortez, who was also reelected to represent parts of the Bronx and Queens in District 14.

Governor @KathyHochul campaigning on the Upper East Side.

‘Incredible diners in this community,’ she says. pic.twitter.com/c1YoaEgNE9

Hochul also went to Fort Greene in Brooklyn for a rally with Attorney General Letitia James, who won her bid for reelection. James had initially planned to run for governor against Hochul, but dropped out of the race to stay on as the state’s chief legal officer.

At the crowded 86th Street subway station on the Upper East Side, Hochul shook hands, talked with toddlers, pet some dogs and schmoozed with other Jewish elected officials in the area, including Nadler and Manhattan Borough President Mark Levine.

In a press conference with reporters, Hochul said the difference between her and Zeldin are “sound bites versus sound policy.”

“It’s really easy to get out there and stand on a street corner and scream about crime,” Hochul said before citing Zeldin’s voting record against gun safety legislation. “We’re working on it, he talks about it.”

Levine told the New York Jewish Week that the Jewish community that he represents “cares about democracy.”

“This is a community that cares about safety, but wants actual policies, not just incendiary sound bites,” Levine said. “I am really confident that Kathy Hochul is going to win big in Manhattan.”

A Jewish senior citizen voter at a polling place just a few blocks away said that she was voting because of abortion rights, the economy and rising antisemitism.

“The people who I voted for will be the best in recognizing and not glossing over the antisemitism in our city,” said the voter, who asked not to be identified and did not want to say who she voted for.

Long lines for a Borough Park polling place. (Video sent to me.)

Outside the polls, all voters I’ve spoken with here say they are voting for Zeldin. pic.twitter.com/NTEHt0Yo9k

In Borough Park, Brooklyn, a Hasidic enclave that generally leans conservative and has favored Zeldin throughout the campaign, multiple polling stations were reported to be overflowing with voters.

At a polling place on 16th Avenue, every voter who spoke to the New York Jewish Week said they were voting for Zeldin.

Ira Marco, a Hasidic Jewish voter who was born and raised in Borough Park, said the Republican candidate’s message was “resonating more with the locals.”

“People here want revenge on what they feel as system that is broken,” Marco said. “Everyone here feels that the ball game is not an equal ball game.”

In the end, however, the incumbent Hochul had the advantage. New York City Mayor Eric Adams congratulated Hochul in a tweet, calling the governor his “partner.”

“Tonight, women and girls across the Empire State have seen another glass ceiling shattered — and the best is yet to come,” Adams said.