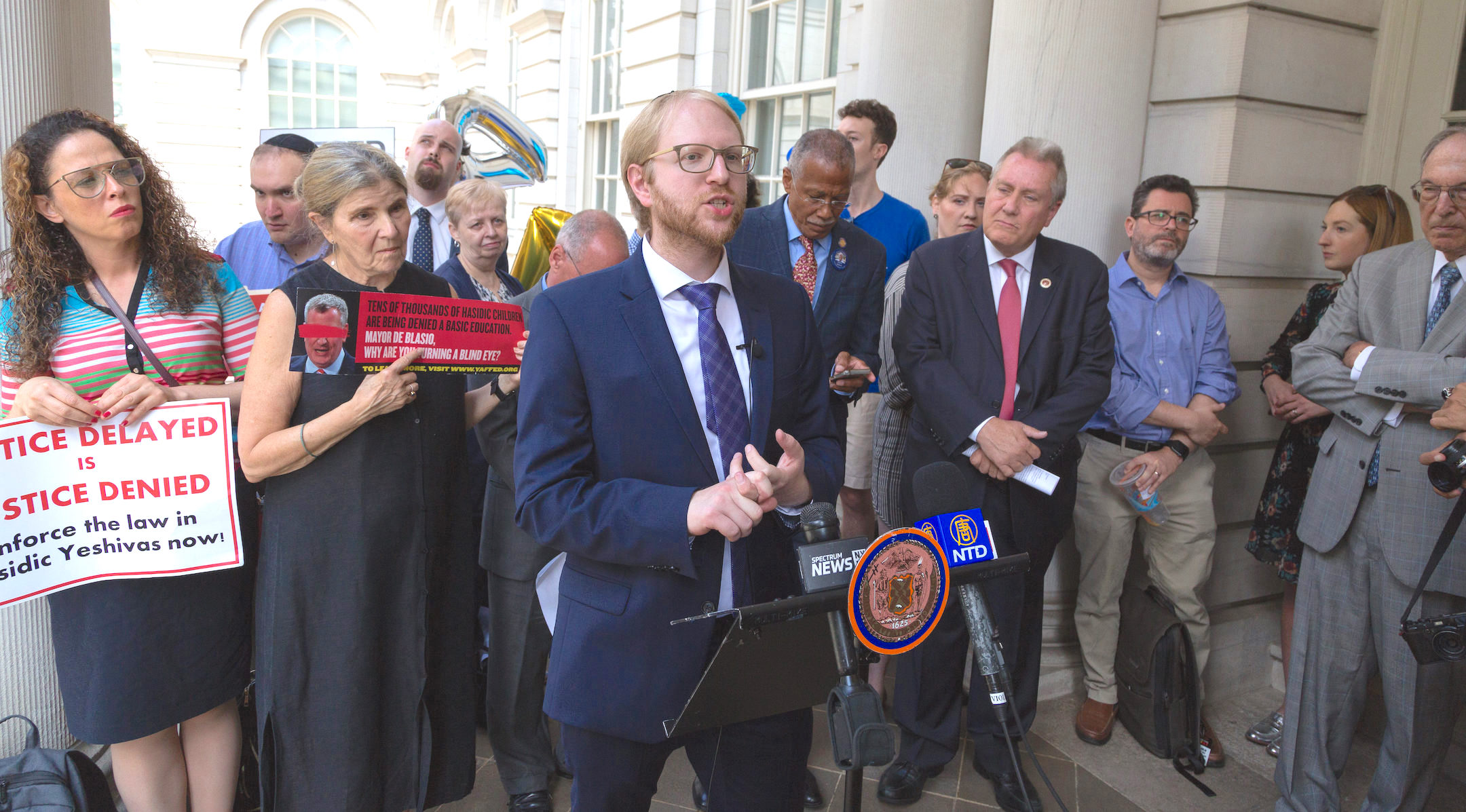 (JTA) —  Naftuli Moster, the founder and former executive director of Yaffed, the advocacy group focused on improving secular education in haredi Orthodox Jewish schools, is launching a media organization focused on what he sees as a news desert in the haredi world.

With a board that includes seasoned Jewish journalists, “Shtetl: Haredi Free Press” will launch in 2023 online, but Moster said he is exploring a print option as well. Shtetl’s online announcement said it had seed funding for two years, but Moster declined to comment on who the funders are but said the media organization would produce independent journalism.

“Every community needs a free press,” Moster told the Jewish Telegraphic Agency. “Members of this community, my community, deserve a free media as well. Shtetl’s existence is an exciting development in the Jewish and media spaces, and we are looking forward to making a big splash in early 2023.”

The announcement has already drawn plaudits from those who believe the haredi Orthodox community could benefit from journalism that holds communal institutions to account — and skepticism or even outright criticism from people in the community who think existing outlets are serving haredi Jews well or who think Moster is the wrong person to instigate change.

Moster, who grew up in a haredi Orthodox family in Borough Park, Brooklyn, stepped down from his position at Yaffed in September after a decade as its founder and leader. During that time, Yaffed got the attention of city and state education officials as the group filed multiple lawsuits meant to increase access to secular education in haredi yeshivas. In turn, he drew the ire of haredi Orthodox leaders, who resented an ostensible insider inviting scrutiny of their educational institutions.

The haredi communities of Brooklyn and New York’s exurban Rockland and Orange Counties are currently served by multiple print and online newspapers, in English and Yiddish, that tend to be protective of community interests, including the yeshivas. Some of the outlets, particularly a handful of weekly magazines, are ambitious in their reporting, landing interviews with city and national leaders. None prints pictures of women, in keeping with contemporary haredi norms that some Orthodox women are contesting.

Elad Nehorai, an ex-Hasidic writer and progressive activist, said most of the haredi outlets are more akin to community newsletters than journalistic enterprises, publishing local interest stories like death and wedding announcements, notices about community events and stories about construction of new synagogues or schools. National and world news coverage tends to focus on the haredi community in Israel and syndicated news copy about events outside of the religious world.

For example, it was a secular newspaper — the Israeli daily Haaretz — that in 2021 reported on allegations surrounding Chaim Walder, a once-celebrated Israeli haredi children’s author, who was accused of having sexually assaulted more than 20 women, and several underage girls. Only after the allegations became a prominent topic of conversation in haredi communities did the press there begin to cover them — often with apparent sympathy to Walder.

“Very often if you look at the press there, it’s more about building community,” Nehorai said of the haredi world. By contrast, “if you open the New York Times it’s generally a lot of negative stories.”

Leaders of the haredi community were incensed when, in September, the New York Times published a major investigation that found that in New York’s Hasidic yeshivas, “generations of children have been systematically denied a basic education, trapping many of them in a cycle of joblessness and dependency.” Moster featured prominently in the coverage. Backlash from the Hasidic and other Orthodox communities began before the story was even published, with people claiming the New York Times and the Jewish reporters themselves were biased and antisemitic in their reporting.

One problem, haredi critics of the reporting said, is that the story leaned heavily on the accounts of people who had previously left the community.

“Their stories are really important to be told and to be heard. The problem is that the secular world listens to their stories to the exclusion of all else,” said Rifka Wein Harris, a haredi attorney who has advocated for changes in the way Orthodox Jews are portrayed in the media. “And so what I would love would be for there to be the magazine Shtetl that was run by people who actually were in the haredi world.”

Shtetl’s announcement appeared to nod at those concerns, saying that the new outlet would aim to foster “important discussions that are crucial for the well-being of the Haredi community and beyond” by producing “content that other outlets are unable, unequipped, or unwilling to provide to their readers, whether owing to the lack of resources, cultural competency, access to insiders or Yiddish language proficiency.”

Moster said he hopes that Shtetl’s reporters ultimately include haredi reporters — though he said that’s not going to be a requirement for the job.

“To be a haredi-serving entity, not every member of the team must be haredi,” he said. “Shtetl is looking to hire the most talented people who can do the most accurate reporting on the haredi community. That being said, Shtetl would love to hire talented haredim for important roles.”

The project is currently hiring board members, full-time and freelance reporters, editors and marketing professionals. Its founding board includes journalists Larry Cohler-Esses of The Forward and Ari Goldman of Columbia Journalism School, neither of whom is haredi, as well as Adelle Goldenberg, a recent Harvard University graduate who grew up in the Hasidic neighborhood of Borough Park. Goldenberg was the winner of the 2021 Yaffed Changemaker Award for her assistance to haredi students who want to go to college outside of the yeshiva system.

Goldman, a former New York Times religion reporter, told JTA he became familiar with Moster’s work with Yaffed about five years ago after Moster visited his Modern Orthodox synagogue. (Goldman’s wife, the publicist Shira Dicker, has worked with Yaffed since early 2022; he said her work with the group is “irrelevant” to and postdates his own.)

He said he was impressed with Moster’s efforts to get haredi young people a secular education on par with that at public and other private schools and believed that a journalism initiative could benefit the haredi community.

“I want to be supportive of an effort that tries to shine more light on a community about which a lot is hidden and unknown,” Goldman said. “I’m also very interested in good journalism, which I think is a cornerstone of our society. And I want to see it put to the best of use in the haredi community.”

Critics of Shtetl from within the haredi and Orthodox world have already voiced their opinions on social media, arguing that the new endeavor may have an agenda to undermine their communities.

The backlash echoes the one that Moster has received for a decade already, when his education advocacy even earned him the label of “moser,” reflecting a dangerous accusation that he had inappropriately involved secular authorities in Jewish affairs.

Even some of those who say their community could benefit from an additional approach to journalism say Moster’s track record does not give them confidence about the publication he is launching. Wein Harris said she thought the New York Times and the most ambitious haredi presses, including Mishpacha and Ami magazines, were too extreme in their conclusions.

“‘Yeshivas are horrible, abusive institutions’ or ‘yeshivas are the best things in the world.’ And there’s nothing in the middle,” she said. “I would hope that there would be a balanced, not reflexively conservative — politically — media outlet that would write long-form articles about issues and challenges in a thoughtful and deep way. … I would hope that’s what Shtetl would be.”

But she said that after knowing Moster throughout his time advocating for changes to yeshivas including the ones he attended, she doesn’t believe that he is striving for moderation.

“I’ve known him for 13 years, that’s not what his goals are at all,” she said. “And so I worry that this is just going to be something purporting to be the critical voice of the Orthodox world, when it’s in fact, something very different.”

Some of the most unmediated conversations about haredi communities happens on WhatsApp, a dominant mode of communication and news distribution for many Orthodox Jews, and on online forums where users debate news developments. On one of them, the decade-old Yiddish social media platform Kave Shtiebel, Shtetl was a topic of conversation after its announcement this week.

One commenter wrote that a press “uncovering the abuses of wicked people” was needed, while another questioned why existing channels on Telegram, a secure messaging platform, were not enough. Several people said they had been curious about the forthcoming outlet but turned off by Moster’s participation — if only because it would undermine whatever the outlet produces.

“If he really wants it to be picked up, he should go under the radar,” one person wrote on Kave Shtiebel. “He is a red flag.”

The backlash is not surprising, said Nehorai, who said his experience is that there is little tolerance for criticism from within the haredi community.

“The people who are reacting negatively don’t see it as, ‘Oh they’re just writing negatively about us,’” he said. “They see it as traitorous. They see it as someone who’s turned on us. And what’s fascinating about that is that it doesn’t matter if you are haredi or you are ex-haredi, what occurs then is you are labeled as an outsider.”

This story has been updated since publication to include discussion of Shtetl by haredi Jews and to reflect Goldman’s wife’s professional relationship with Yaffed.