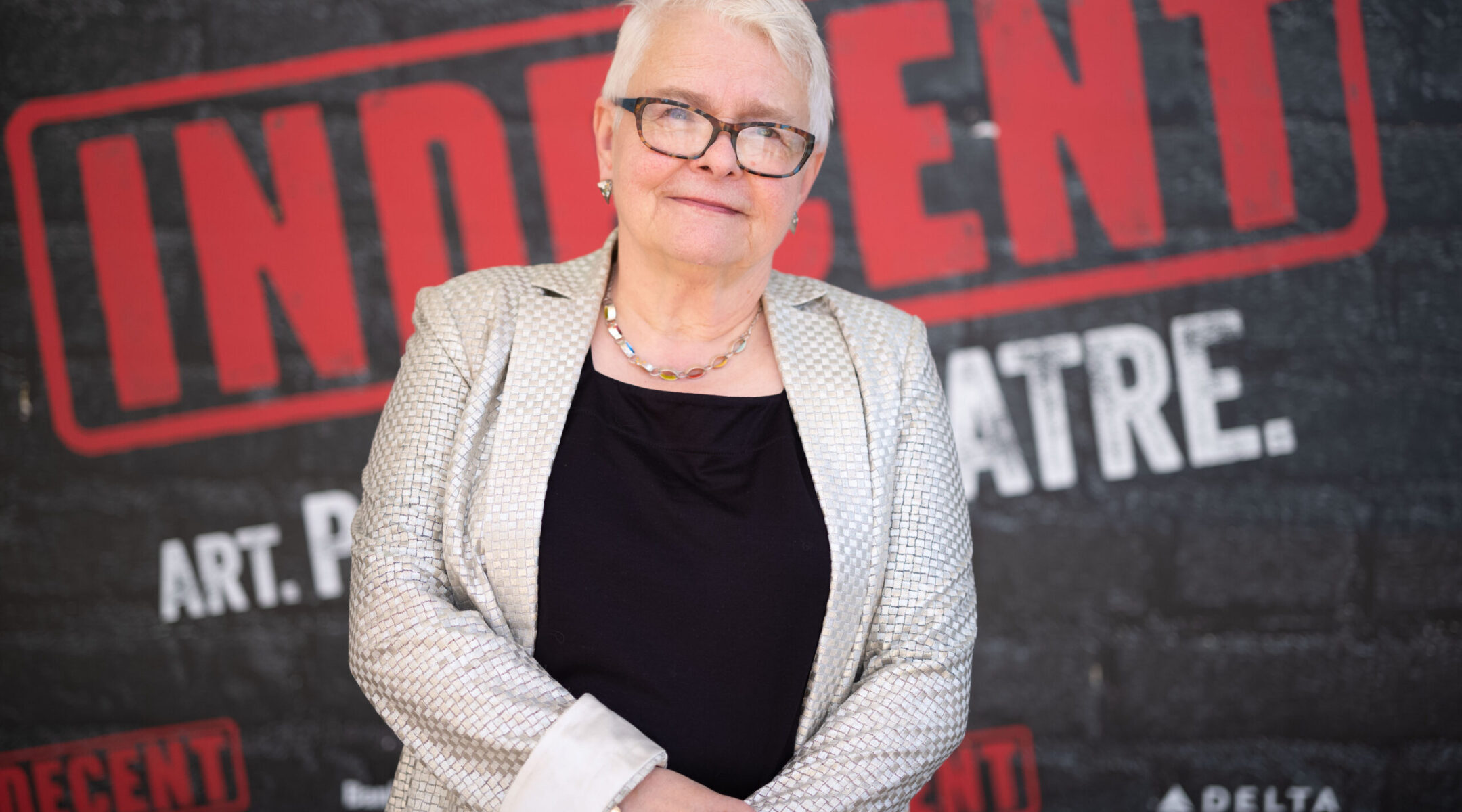 (JTA) — In 1923 in New York, a Yiddish play that featured the first lesbian scene on a Broadway stage was censored for being indecent. In 2023 in Florida, a play about the first play has been canceled for the same reason.

For many involved in the new play, including its Pulitzer Prize-winning Jewish playwright and the Florida high schooler cast in a lead role, the déjà vu is alarming.

“The 100-year anniversary of Sholem Asch’s ‘God of Vengeance’ being shut down on Broadway is the same week that our production of ‘Indecent’ would have opened,” said Madeline Scotti, the student who first drew attention on Instagram to the censorship by her local school board of the “queer Jewish love story” in which Scotti had been cast. “One hundred years — 100 years — and we are still fighting the same injustices that Sholem Asch and his company did.”

Scotti is a student at Douglas Anderson School of the Arts in Jacksonville, Florida, where students had been planning to perform Paula Vogel’s “Indecent” this spring — until officials told them on Thursday, the first day of rehearsals, that their show could not go on. Scotti attributed the censorship to Florida’s new law limiting classroom instruction and discussion about sexual orientation and gender identity — what opponents call the “Don’t Say Gay” bill.

Vogel said she, too, was first concerned about homophobia — then added other worries as she heard from people in Jacksonville.

“Parents who live in the community have written to me and said, ‘There is rising antisemitism in our community,’” Vogel told the Jewish Telegraphic Agency on Sunday. “I very much think that what the school board may not be able to express is their concern about presenting a play that shows how censorship is the first step to the Holocaust.”

Vogel’s 2015 play is about the 1923 Broadway debut of “God of Vengeance,” a play written in Yiddish by Sholem Asch that includes perhaps the first romantic kiss between two women on an American stage. In “Indecent,” the actresses who play the lesbian characters in the Asch play are depicted as lovers off stage. The plot picks up after “God of Vengeance” is shuttered and its cast briefly imprisoned over obscenity charges. “Indecent” follows the stage manager who returns to Eastern Europe, disheartened by what happened in America, and is ultimately murdered by the Nazis.

Students at Douglas Anderson all had permission to act in “Indecent,” and they had put on other shows portraying sexuality in the past: “Chicago” last year, and “Rent” before that. But conditions in the state changed last year when Florida’s Republican governor, Ron DeSantis, signed the Parental Rights in Education Law into effect, stoking fear among LGBTQ teachers and students and causing school districts to alter policies.

The board in Duval County has defended the law, drawing a lawsuit from parents and advocates over what they said was its enforcement and arguing in court last fall that the district should be allowed to implement the law while litigation pends.

“Tonight during rehearsal our company was notified that the school board is shutting us down not because of but related to the ideals stated in the ‘Don’t Say Gay’ bill,” Scotti said in the video. “‘Indecent’ is a story about how detrimental censorship is, about how its damaging effects can ruin a nation and a community. I don’t need to point out the irony.”

Duval County Public Schools officials denied that the decision to cancel the production had anything to do with the law.

“‘Indecent’ contains adult sexual dialog that is inappropriate for student cast members and student audiences,” the district said in a statement. “It’s that simple. The decision has no relevance to any legislation but is rather a function of our responsibilities to ensure students engage in educational activities appropriate for their age.”

Vogel said she believes the show’s contents are appropriate for teenage audiences — and that she would have permitted changes to the show’s display of sexuality. She volunteered that a school production of “Indecent” could feature the two women holding hands, rather than kissing, in a tweak she likened to removing profanities from some of her other award-winning works. “The judgment by the board that this is too mature for high school students is absolute nonsense,” she said.

The censorship in Jacksonville is the latest in a string of incidents in which works with Jewish themes or about the Holocaust have been ensnared in efforts to limit schoolchildren’s exposure to ideas that some parents oppose.

School reading materials are under increasing scrutiny amid conservative parent groups’ pressure to remove ideas they define as “critical race theory” and “gender ideology.” Books about Jews have gotten caught in the dragnet, including in a Tennessee district that removed the Holocaust memoir “Maus” from its curriculum, a Texas district that briefly removed an adaptation of Anne Frank’s diary and a Missouri district that briefly removed history books about the Holocaust.

Florida is a front line in this new culture war. In Walton County, in the state’s Panhandle, the children’s book “Purim Superhero” was among dozens of titles removed from shelves last year in response to parents’ protests; its main character has two fathers. And the Duval County district kept a diversity-themed collection of children’s books that included a book about Shabbat from students for more than a year. Two candidates supported by the local chapter of Moms for Liberty, a group leading the censorship push, won spots on Duval County’s seven-member school board in November.

Florida has also recently emerged as a hotbed of white supremacist and neo-Nazi activity. The Anti-Defamation League issued a report last year raising alarms about extremist activity in the state — and that was before the leader of the Goyim Defense League, a prominent antisemitic group, moved there from California. The group played a role in broadcasting “Kanye is right” at a college football game in Jacksonville in October, referring to the artist Kanye West’s antisemitic comments. It is also behind the distribution of antisemitic propaganda, often in plastic bags placed under rocks at private homes, around the country and locally.

Vogel said she saw a clear echo of what happened with Asch’s play in 1923, when the play was censored amid an atmosphere of rising antisemitism in the United States. (The rabbi of Temple Emanu-El in New York City, concerned that the play could cast Jews in a negative light at a time when non-Jews were organizing antisemitic campaigns, reportedly sounded the alarm to authorities; the play was later banned in London, too.)

She said she is planning a response beyond the encouraging message she left on Scotti’s Instagram post and the exhortation to Douglas Anderson’s principal that she tweeted. (“Why cancel Indecent rather than structuring post-play discussions?” she wrote. “It is a unique way to look at the Holocaust as well as gender and censorship and antisemitism.”) But the antisemitic activity in Jacksonville, Vogel said, has made her cautious about sharing details of who she is working with locally.

Vogel said she had spent the weekend Zooming and speaking with members of the original cast of “Indecent,” who worked together for several years as the play made its way from a small stage to Broadway, where it won the Tony Award for best play of 2015. On Monday, she said she hoped to offer the school’s principal “a modest little proposal”: to travel to Jacksonville along with Rebecca Taichman, the play’s original director, to present “Indecent” to the students who were barred from staging it themselves and to a community that could benefit from a hard conversation.

“We know this historically: The first step towards totalitarianism is censorship of the arts. It’s burning books. It’s closing down theaters. … In all societies as we go towards fascism, the arts are labeled as degenerate,” Vogel said. “That’s the conversation we need to be having.”

Vogel said her response was informed by her decades as a teacher; she was a professor for many years at Brown University and then moved to Yale, where she was chair of the playwriting department at the vaunted Yale School of Drama.

“I have one response as a Jewish artist. I have another response as an educator,” Vogel said. “And right now it’s the educator who is coming forward.”

The principal of Douglas Anderson School of the Arts told students last week that “Indecent” would be replaced by a different play, Anton Chekhov’s “The Seagull.” But some of the student actors may have other plans.

“The support from the Broadway theatre community feels like we have found our own mishpoche,” Scotti posted on Instagram on Sunday, using the Yiddish word for “family.”

Scotti added, “I am delighted to say that we have something in the works. The company is meeting and discussing as you’re seeing this. From ashes we rise!”