When we think of Yiddish, most of us envision an 18th-century Jewish shtetl in Poland or Russia, with Hasidic men in fur hats and bubbies in babushkes. But Yiddish, the Hebrew-German hybrid, actually started out much earlier, according to scholars of the language.

The first extant written example of Old Yiddish is the poem “Virtuous Joseph,” which was written in 1382. It’s a tribute to the biblical character of Joseph, a slave in the house of Potiphar, who got in trouble “when his master’s wife asked him/to lie with her and commit a sin.” The rhymes are rollicking, almost fun, and they give the poem a feeling of old classic verse, like Shakespeare or The Canterbury Tales. We don’t know much about the writer, but we do know that he or she had a sense of humor: “The ladies exclaimed, ‘Don’t make such a fuss! How could a Jew appeal to us?'”

Although it’s separated by centuries from both the modern world and from the original biblical story that inspired it, “Virtuous Joseph”–recovered from the Cairo Geniza in Egypt–is a remarkable artifact. It shows us that back then, as now, people didn’t just read Bible stories–they reacted and interacted with them as well. 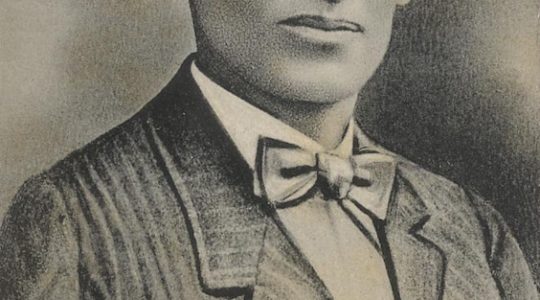