With the Soviet Occupation of Lithuania in full swing and the encroachment of Nazism around the corner, Jewish Polish refugees and Lithuanians were desperate for a way out.

Introducing Chiune Sugihara, Vice-Consul for the Empire of Japan in Kaunas, Lithuania, and all around exceptional human being.

After the Japanese government denied repeated requests for laxer exit visa requirements for the hundreds of refugees lined up outside the consulate’s doors, Sugihara took over. For one summer month in 1940, he wrote visas by hand, spending hours and hours daily on the laborious task, issuing, in the end, an estimated 6,000 visas. For perspective: the Simon Wiesenthal Center approximates that around 40,000 descendants of Jewish refugees are alive today because of the selfless diplomat’s actions.

Sugihara and his family worked tirelessly until the Japanese government closed the consulate—in fact, the diplomat was furiously scribbling visas as the train left the station, tossing them into the crowd of refugees on the platform below.

In 1985, Sugihara and his wife Yukiko were honored as Righteous Among The Nations. 45 years after he signed the visas, Sugihara was asked about his motivation. His response, pithy and profound: “They were human beings and they needed help.”

___
Watch the full documentary Sugihara: The Conspiracy of Kindness (2000):

The Fastest Draw in the Shul 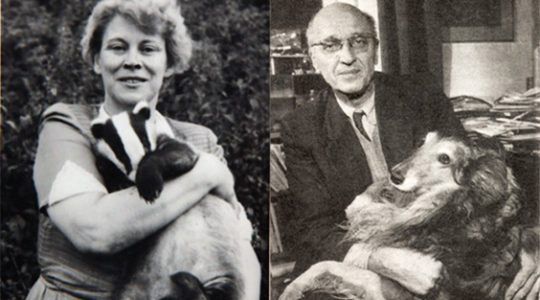