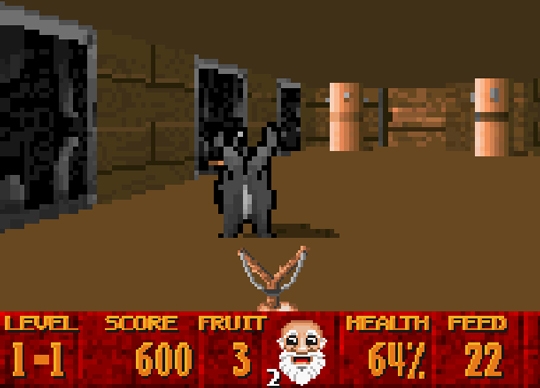 In 1992, the video game Wolfenstein 3-D was released. It was one of the first games where the TV screen showed the player’s first-person point of view. When your character moved through rooms, you actually did move through them. It was one of the major evolutions of video games.

Oh, and the game itself? It took place in the 1940s. You assumed the persona of a Polish spy, B.J. Blaskowicz — who may or may not be secretly Jewish — and your job was hunting Nazis. You held a gun, visible in your fist in the corner of the screen. You’d shoot a Nazi, and tiny spatters of red squares flew up that were supposed to be blood.

But in 1992, the world of Super Nintendo wasn’t ready for this realism. Wolfenstein was the only game ever to be banned for the system. So its makers sold the rights to an evangelical Christian company, and redesigned Wolfenstein’s Nazi chambers to be floors of Noah’s Ark. Instead of a machine gun, the player uses a slingshot to throw food laced with sleeping pills at angry animals. Called Super 3D Noah’s Ark, the game wasn’t a great commercial success, but was recently re-released for play on Macs and PCs. Curious? We are, too.

The Other Kabbalah-Loving L.A. Musician

A New Take on Ancient Songs