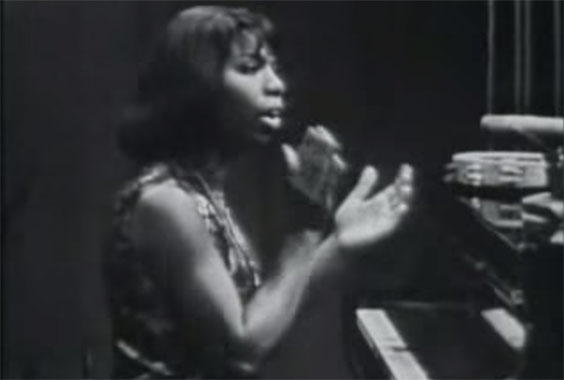 Few songs capture the feeling of a people in exile like “Eretz Zavat Halav.” Taken from a biblical passage, it speaks of Israel’s abundant natural produce (milk and honey, especially), from the perspective of a people yearning for a better life. Few people sing it with the exquisite mixture of joy and longing as Nina Simone, the eloquent and sublime (non-Jewish) jazz singer, in this little-known live video performance with her band from the 1960s.

It’s likely that Ms. Simone learned this song from Shlomo Carlebach, who she met in the 1950s, while they were both getting their starts in their chosen careers: Carlebach playing the folk circuit, Simone as a lounge singer.

Through her other musical work, and her role in the Civil Rights Movement, Simone stayed linked to several prominent Jewish ventures. On her 1965 album Pastel Blues, she also covered the song “Strange Fruit,” written by a Jewish songwriter about lynchings in the South. But “Eretz Zavat Halav” is probably her most resplendent entry in the Jewish songbook, capturing both the longing of someone in exile, and the distant memory of how good it feels to be home.