Holocaust escapee gets back passport 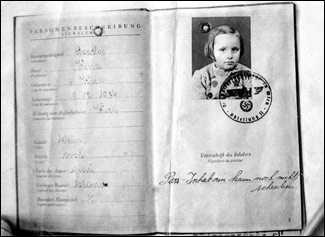 SYDNEY, Australia, April 19 (JTA) — In front of a barrage of Shanghai news photographers and TV cameramen, a Jewish woman from Sydney was presented with a passport she hadn’t seen in 66 years. The events leading up to the discovery of 70-year-old Gerda Brender’s passport constitute a bizarre postwar tale that never would have surfaced in pre-Internet days. In 1999, Zhu Peiyi, a Shanghai businessman who collects documents, bought two passports in one of the city’s flea markets. He could tell from the names on the passports that their owners must have been members of the 20,000-strong Jewish community that fled Europe before the beginning of World War II to seek refuge from the Nazis in the Chinese city. When Zhu learned that Shanghai was to build a new Jewish center, he got in touch with local Jewish authorities and presented them with the passports, hoping their rightful owners could be found. One had belonged to a four-year-old girl, Gerti Waskoutzer, who had escaped her native Vienna with her family in 1939. The Waskoutzers lived in Shanghai until 1949, when they moved to Sydney. The Shanghai Jewish Refugees Memorial received the passports from Zhu and posted information about them on www.rickshaw.org, a Website dedicated to expatriate members of the Shanghai Jewish community. Sydney-based Peter Nash, 70, a retired textile machinery agent and a contributor to the Web site, was amazed to see the passport photograph of a little girl who had been in kindergarten with him. Nash immediately talked to Brender’s son, Steven, who runs a knitting mill in Sydney. Nash often had done business with Steven Brender. The two had no problem persuading authorities that the passport had belonged to Brender’s mother because Gerda Brender still has the original of the photo used in the document. An e-mailed image of the photo was enough to confirm that the passport was hers. Rather than have the passport sent to Sydney, the Brender family decided to travel to Shanghai so that Gerda Brender could accept it personally. Zhu presented it to her in a ceremony at the Shanghai Jewish Refugees Memorial. In his bid to find the owner of the passport, Zhu first contacted the Shanghai press, and local reporters monitored his progress in finding the document’s owner. When Brender arrived at Shanghai’s Pudong International Airport last week with her husband Joseph and their children Steven and Michelle, she looked around the arrivals hall, noting all the media present and wondering if a celebrity had been on the plane. She didn’t know that the camera and video lenses were focused on her. Brender became an instant celebrity in Shanghai, with front-page coverage in the city’s newspapers and television news stations. In the ceremony at the Ole Moshe synagogue, Zhu handed Brender the passport she hadn’t seen for more than half a century. More than 200 people were at the ceremony; they narrowly outnumbered media representatives. “I couldn’t believe the TV and press coverage the story got. She really was big news in Shanghai,” Joseph Brender, a Sydney community leader, told JTA. Gerda Brender told JTA, “My past flooded back to me. We went walking through the old area of Hongkou where we lived and found our home. Nothing has changed in all that time.” The home is above a group of shops and still must be accessed by a ladder. “I believe the area is due for redevelopment and it has meant so much to me to be able to show it to my husband and children and grandchildren before it is all destroyed,” Brender said. “I am so grateful to Mr Zhu. I remember clearly how Jewish life thrived in that little area in such a huge city.” Back home in Sydney, Brender has her passport and her reinforced memories, thanks to the kindness of a collector, the power of the Internet and the sharp eye of an old friend. She pledged to donate the passport to the Jewish Museum in Sydney. “I had no brothers or sisters, and this is my only physical link with my childhood in Shanghai,” she said. “It was a great shock to have found it and it sent shivers down my spine — but it was a wonderful surprise.” Zhu refused any payment for the document. The other passport was in the name of Manfred Lichtenstein, born in 1932 in Halle, Germany. It has yet to be reunited with its owner or his family.