Conversion celebration takes a surprise turn — into a wedding 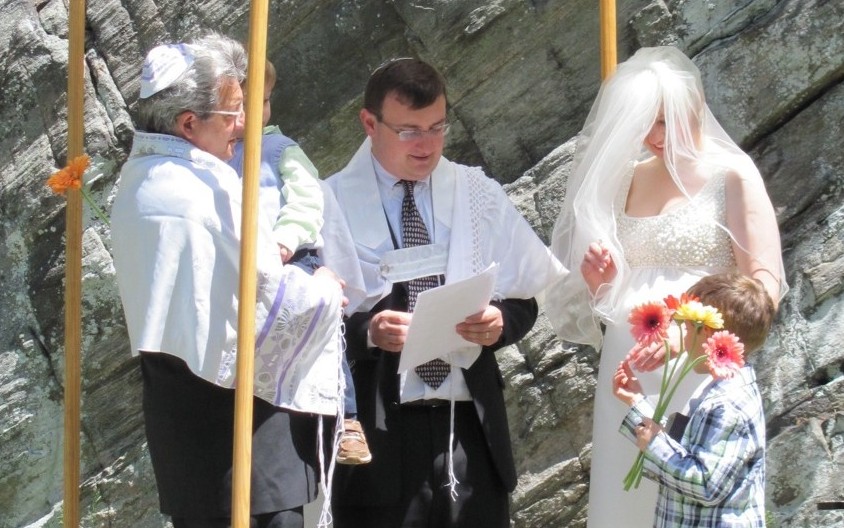 Rabbi Eytan Hammerman of Temple Beth Shalom in Mahopac, N.Y., officiating at the Jewish wedding ceremony for Sam and Angela Gold. With them are the Golds' children, Jacob, 2 1/2, and Haden, 6. (Courtesy Angela Gold)
Advertisement 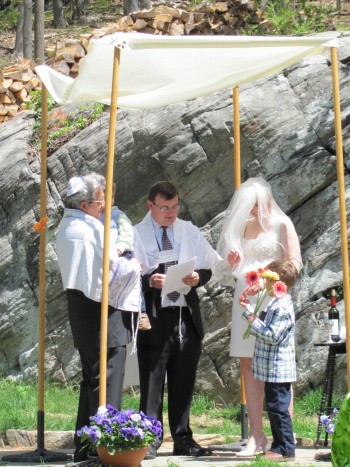 Rabbi Eytan Hammerman of Temple Beth Shalom in Mahopac, N.Y., officiating at the Jewish wedding ceremony for Sam and Angela Gold. With them are the Golds’ children, Jacob, 2 1/2, and Haden, 6. (Courtesy Angela Gold)

(JTA) — Helen Rados showed up at the Bedford Post Inn north of New York City to celebrate the conversion of her friend Angela Gold. But as she approached, Rados spotted a chuppah on a hill behind the building.

She figured someone else had booked a wedding. Then she saw Angela wearing a white dress with pearls and beading.

Howard Lebowitz, meanwhile, noticed a piece of paper with Hebrew and English on it. He looked at it more closely: Wow, it’s a ketubah, a Jewish wedding contract, for Angela and her husband, Sam. “This is not just a conversion,” Lebowitz realized. “They’re getting married.”

Some 50 people came to the May 7 party, having been invited to celebrate Angela’s conversion and the conversion of her and Sam’s two young sons. It wasn’t long, though, before some of the guests were buzzing about a wedding about to take place.

“It was a big surprise and very exciting,” said Rados, one of Sam’s first cousins.

A week earlier, Angela, 34, had appeared before a beit din, or rabbinical court, and dunked in the mikvah’s ritual waters to complete her conversion; her son Jacob, 2, joined her in the mikvah (6-year-old Haden had pink eye and had to wait a week for his immersion).

Shabbat morning before the surprise wedding, the Golds, who live in Carmel, N.Y., were called to the Torah at the Conservative Temple Beth Shalom in nearby Mahopac as kallah and chatan (bride and groom).

Angela was given her Hebrew name.

Angela had considered the possibility of converting when she and Sam, 62, married seven years ago in a civil service with just a handful of people in attendance. But way too much was going on at the time.

“There were so many changes, leaving my job, leaving my family, moving to another country,” said Angela, who immigrated from the Netherlands to marry Sam. The two had met 11 years ago when she was vacationing in Florida where he lived at the time. Friendship, then a romance, followed.

As for Sam, he says he never wanted to pressure her to convert. “It just fell into place naturally,” he said.

“I couldn’t be more happy for myself; I’m going back to my roots,” said Sam, the son of Holocaust survivors.

The couple had bought a new house a couple of years ago. They joined Beth Shalom about a year ago and then Angela enrolled in an introduction to Judaism class, studying for conversion.

The Golds gradually shared with close family and friends the news that Angela would be converting. All the while, she says, they were thinking: “Wouldn’t it be great to invite people to celebrate the conversion and then have this wedding … Everybody can just show up thinking they’re coming to a brunch, wear whatever they feel like wearing.”

After milling around at the inn (co-owned by actor Richard Gere), guests were directed outside and up the hill where chairs were set up in front of a chuppah. Beth Shalom’s Rabbi Eytan Hammerman welcomed the guests.

“There was whistling and clapping,” Sam said. “I wish I had a camera to snap some of the faces of the people.”

Angela was escorted down the aisle by her mother and Jacob, Sam by his adult daughter, Bari, and Haden.

“It was just a fantasy,” Sam said. “You couldn’t write it any better than it happened.”

If you know of a lifecycle event that would make a great story, please send an email to Lifecylist@jta.org.