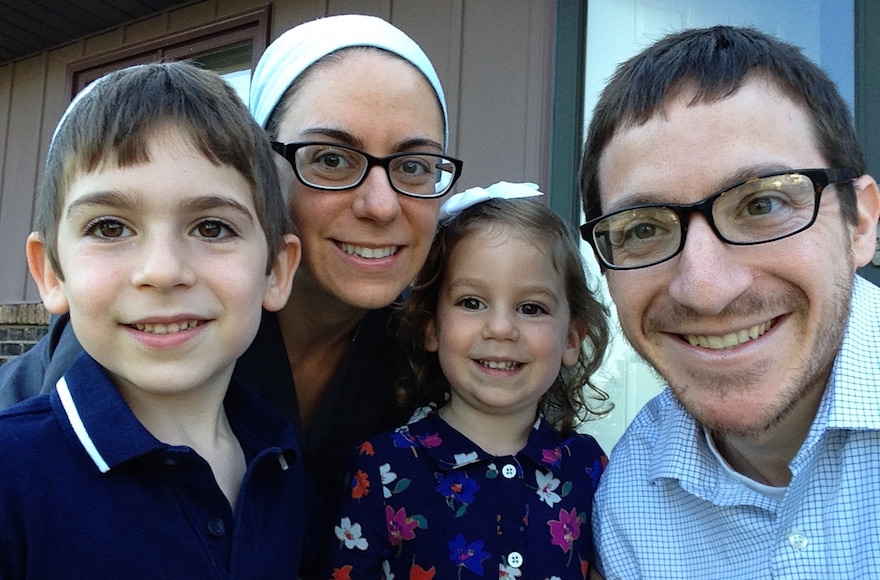 Shlomo and Michal Wadler moved to South Bend from Brooklyn six years ago. They are part of influx of Orthodox families to the Midwestern university town. (Courtesy of the Wadler family)
Advertisement

It has been more than a decade since Curtis “Yehuda” Franks moved to South Bend, Indiana, and most of the time he doesn’t give a second thought to being a visibly Orthodox Jew in this Midwestern city.

Franks teaches philosophy at the University of Notre Dame, a prominent Catholic university known for the Fighting Irish football team, which has helped make the city of 100,000 an island of cosmopolitanism in the rural Midwest. It’s also home to a small yet vibrant Orthodox community.

But leave South Bend and it’s another world. Franks, who with his beard, white shirt and dark pants looks Hasidic, remembers stopping to buy tires at a Sears in small-town Indiana and being asked by the cashier if he was from a nearby Amish village.

When Franks told her that he had never heard of the town, the cashier told him, “Oh, you’d love it there.”

Franks is among a growing number of Orthodox Jews who have moved to South Bend in recent years. The city has all of the key infrastructure elements necessary for an Orthodox Jewish life: two Orthodox synagogues, a kosher market, an eruv enclosure, a mikvah ritual bath, a day school and high schools.

But South Bend offers another unique draw for Orthodox Jews: a state-run school voucher program in which public funds can go toward tuition at private schools, including religious ones. That has helped make Jewish day school tuition in Indiana supremely affordable – free in some cases – for Jewish families that meet certain income requirements.

It’s one of the reasons the Orthodox Union is promoting South Bend as an attractive option for Orthodox families looking to relocate from the Northeast. South Bend has about 100 Orthodox families, the O.U. estimates. In addition to the South Bend Hebrew Day School, the city is home to a high school yeshiva for boys and a Bais Yaakov for girls.

Residents say South Bend offers a welcoming atmosphere without the stress and high cost of living in a big city.

“I like the quiet and the pace of it,” Franks said. “The cost of living is very low, so you can put a lot of your emotional efforts into the right type of things other than financial stress.”

Because the city’s Orthodox community is so small, members work hard to make new arrivals feel at home.

Shlomo and Michal Wadler, both Brooklyn natives, moved to South Bend six years ago so Shlomo could study for his doctorate in theology at Notre Dame. Michal works as a physical therapist, and the couple has a 7-year-old child and a 4-year-old Hoosier — an Indiana native.

“It’s an extremely warm community,” Shlomo Wadler said. “For the first few months, people were bringing us meals for Shabbat. I don’t think we cooked for Shabbat for the first couple of months.”

Zvi Silver, who moved to town from Pittsburgh seven years ago and is now the board president of the South Bend Hebrew Day School, said, “Everyone knows each other and looks out for each other.”

Silver said the school has seen steady growth in recent years, with 170 students enrolled this fall, up from 159 last year.

Of those, more than half were beneficiaries of Indiana’s voucher program. Under the Indiana program, a family of four earning less than $45,000 per year can get a voucher worth the full cost of tuition. Students whose parents make up to $67,000 annually can get a 50 percent voucher.

Standard tuition rates at South Bend Hebrew Day School range from $4,500 to $6,950, depending on the grade. Last year, 57 students were on a full voucher and 26 were on a partial voucher, according to Silver.

Five years ago, Shani and Aryeh Kramer were living in Lakewood, New Jersey, when Aryeh saw a job advertised for a kosher grocer “out of town” and became curious. When their air conditioning broke down on the eve of a July 4 weekend — with no one available to fix it — they decided spontaneously to drive 13 hours to make it to South Bend for Shabbat.

“We fell in love with the small-town feeling,” Shani Kramer said. “We had lived in a New Jersey town that was big, but I felt that nobody knew I existed there. I missed that feeling of people caring about each other. This is a place where you can be somebody and every single person counts and can contribute. We’ve never looked back.”

“We fell in love with it and six weeks later we moved here,” she said. “South Bend found us rather than the other way around.”

The vouchers are a boon for South Bend’s Orthodox community, according to Michall Goldman, outgoing executive director of the Community Development Initiative of South Bend, which tries to bolster Orthodox Jewish life in the city.

“We are a desirable place to relocate because of the vouchers, but our goal is that anyone who has moved here will be successful – either they have a job offer waiting for them here or they are able to continue their work there,” Goldman said, adding that a family with six children can make around $100,000 per year and still afford a decent house. 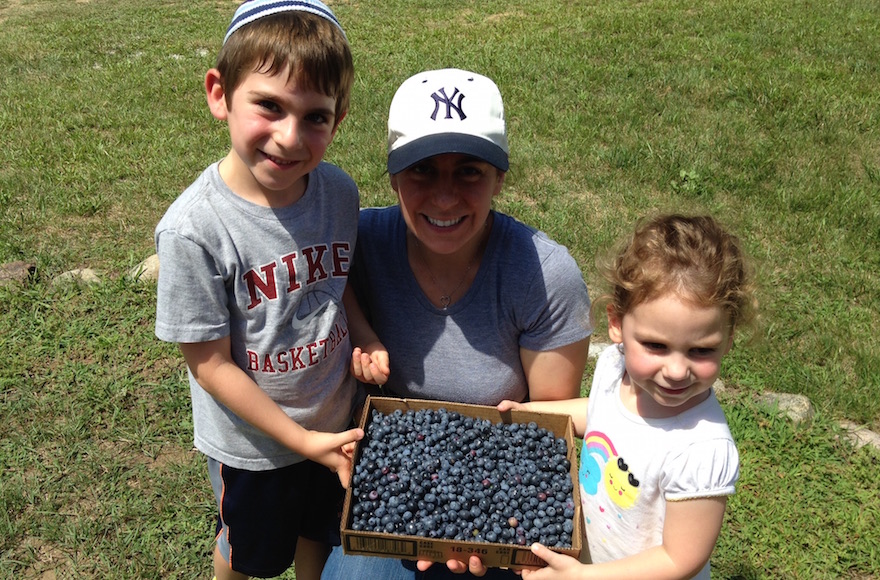 Michal Wadler with her two children. The girl, 4, is a Hoosier — a native-born Indianan. (Courtesy of the Wadler family)

South Bend also benefits from geography. The city is only 95 miles from Chicago and a four-hour drive from Cleveland and Detroit. The local airport has daily flights to Newark. Notre Dame is a major source of employment for professionals from across the country, and the area has extensive opportunities in the medical and mental health field.

Most Orthodox arrivals know and care little about South Bend’s Catholic reputation or the history of the Notre Dame football team, which is believed to have invented the now popular phrase “Hail Mary” to describe a desperation pass and whose stadium is known for the Touchdown Jesus mural on the main campus library visible from the stands.

“In our demographic they haven’t really heard about it,” Goldman said.

The Jewish community of South Bend has a storied history and long has been part of the fabric of local life. The Jewish Federation of St. Joseph Valley, which includes South Bend and the surrounding area, estimates the overall Jewish community at 1,800. Orthodox Judaism here dates at least back to the 19th century. Hebrew Orthodox Congregation, the black hat-style Orthodox synagogue in town, was established in 1887. The other Orthodox shul is the Midwest Torah Center.

Twice a year, the Orthodox Union holds a Jewish Communities Fair in New York where families considering moving can meet with representatives of communities interested in recruiting Orthodox Jews.

Rabbi Judah Isaacs, who as the O.U.’s director of community engagement works to help bolster South Bend and other “out of town” Orthodox communities like Southfield, Michigan, and Overland Park, Kansas, says he highlights the intimacy, low cost of living and anchor Orthodox institutions when trying to sell these Midwestern communities to potential newcomers from the Northeast. He tells the communities they must have jobs available if they want to draw new families.

“Orthodox Jews moving to the Midwest need to go with an out-of-the-box perspective,” he said. “Small can be nice.”