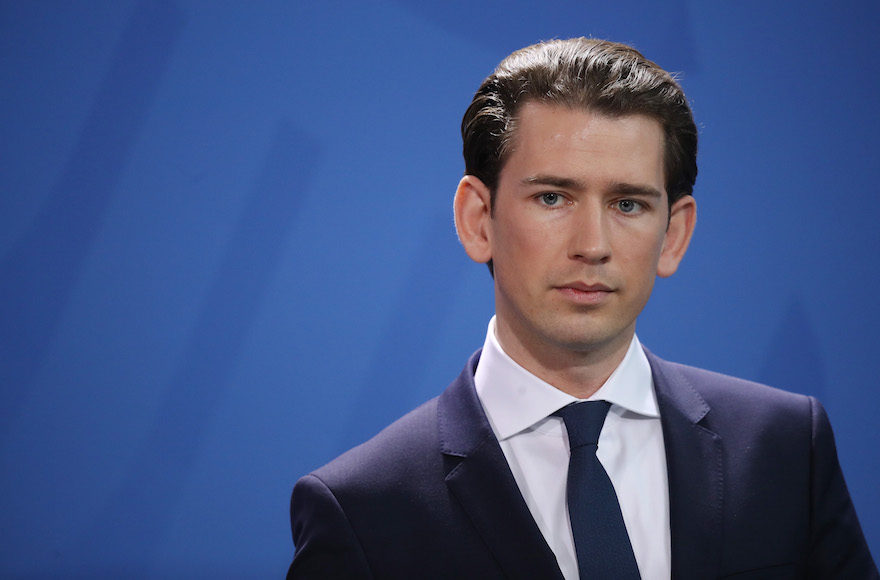 (JTA) — Austrian Chancellor Sebastian Kurz called for punishing with the “the full severity of the law” the authors of an anti-Semitic poem that appeared in a fraternity’s songbook.

The poem, which was printed in 1997 to be used in the Germania zu Wiener Neustadt fraternity, read: “In their midst comes the Jew Ben-Gurion: ‘Step on the gas, you ancient Germanic peoples, we’ll manage the seventh million.”

Kurz spoke out about the booklet Wednesday in a statement following a report earlier this week on it by the Austrian Falter weekly magazine. Racist hate speech is illegal in Austria.

The Germania zu Wiener Neustadt fraternity said the person who was responsible for the poem has been identified and excluded for any membership in the organization.

The songbook became major national news in Austria this week because Udo Landbauer, a cabinet minister from the far-right Freedom Party, was a member of the fraternity. The Freedom Party was founded by a former Nazi officer, but has long fought accusations of tolerating anti-Semitism in its ranks. It entered the government in December after elections in October.

The poem appeared when Landbauer was 11 years old. Interior Minister Herbert Kickl, who also belongs to the Freedom Party, told the Austrian Press Agency that Landbauer would not be exposed to legal action over the booklet.