Israel at 70: It’s time to reclaim the Z-word, Zionism 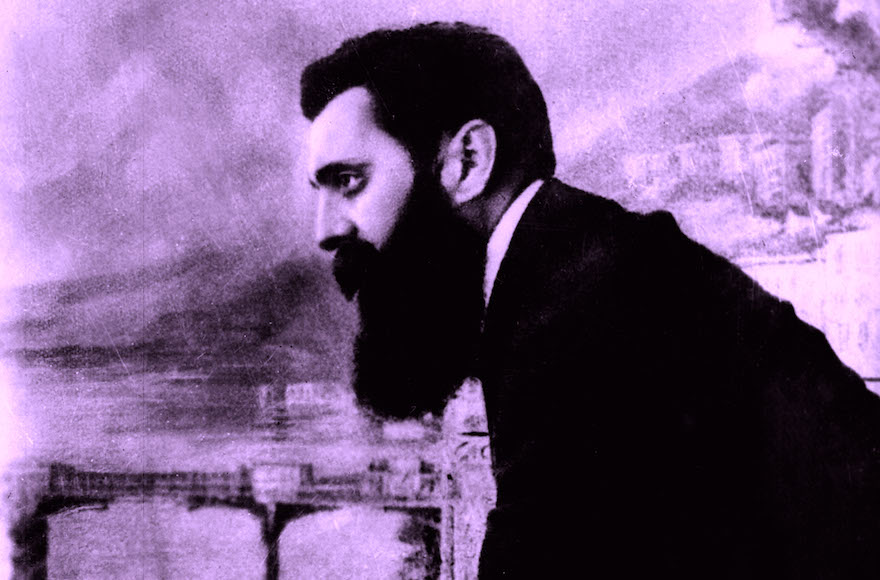 Theodore Herzl, the father of modern Zionism, leaning over the balcony of the Drei Konige Hotel during the first Zionist congress in Basel Switzerland, Aug. 29, 1897. (GPO via Getty Images)
Advertisement

JERUSALEM (JTA) — All too often, when I ask campus organizations that are pro-Israel and deeply Zionist why they avoid using the “Z-word” in their messaging and literature, I’m told, “Zionism doesn’t poll well.”

Let’s learn from our heroic predecessors – and from feminists, gays and African-Americans, whose first attempts to defend their rights didn’t poll well either. Take back the night, resist internalizing our oppressors’ hatred of us.

In his book on “the strage career of the troublesome” N-word, the African-American Harvard Law professor Randall Kennedy explains the “protean nature” of political words. Groups can triumph with linguistic magic by defining themselves and their aims; when enemies define them, they lose. Kennedy warns against allowing the hater to define the hated, and that’s what is happening.

Alas,  shame on us, too. Zionism should be a more popular term than “Israel.” Until 1948, Zionism was the movement affirming that Jews are a people with a homeland and that like other nations, Jews have the right to establish a state on that land (others may, too – nationalism involves collective consciousness, not exclusive land claims). Since 1948, Zionism has been the movement to perfect that state.

Like all countries, Israel makes good and bad moves. If you’re anti-Zionist, you reject Israel’s very existence. If you’re critical of Israel somehow, you’re a thinking human being.

America’s president offers an opportunity to understand that distinction. The 77 percent of American Jews who hate Donald Trump still remain proudly American. Why can’t we love Israel and Zionism regardless of particular prime ministers or policies, too?

Here’s the real question for Jews: Do you feel connected to Israel, today’s great Jewish people project? If so, you stick with it because you belong to the Jewish people. And you help perfect that state through Zionism – embracing different schools of Zionist thought. It could be Religious Zionism or left-leaning Labor Zionism or right-leaning Revisionist Zionism or Cultural Zionism.

In honor of Israel’s 70th birthday, I just published “The Zionist Ideas,” updating Arthur Hertzberg’s classic anthology “The Zionist Idea.” Adding the “s” broadens the conversation, from the 38 thinkers in his book to the 170 in mine. As part of its publication and in honor of Yom Haatzmaut, Israel’s Independence Day, I am urging readers to host Zionist salons, home-based conversations addressing “what Zionism and Israel mean to me today.”

Establishing Israel in 1948 fulfilled the Zionist idea – that powerless Jews need a state as a refuge, immediately, and as a platform to flourish and express Jewish values, long-term. Seventy years later, debating Zionist ideas welcomes debate from left to right, religious and nonreligious, about what Zionism and Israel can mean to me as Jew, as a person – and how some of these ideas can help Israel become a model democracy.

That’s why Zionism didn’t end in 1948 – the debates continue.

If Zionism as an idea asserts that Jews are a people with a homeland, and Zionism as a movement builds, protects and perfects the state, Zionism as a value is more personal. Zionists see it as a way of explaining Judaism as a culture, a civilization, an ethnicity, a tradition, not just a religion. It anchors us in a self-indulgent, throwaway society, providing a sense of community in an often lonely, alienating culture, and a sense of mission in an often aimless world.

Reclaiming Zionism often entails moving from Political Zionism — asking what we can do for our country – to Identity Zionism – asking, with apologies to JFK, what your country can do for you. There’s a reason why Israel ranks 11th on the world “Happiness Index,” despite the nation’s many challenges. Most Israelis are instinctively Identity Zionists. Their identity blossoms from the Zionist state – which appreciates strong family values, robust community ties, deep patriotic feelings – and a broader sense of mission in life. That’s part of the package Birthright participants and other tourists appreciate when visiting Israel. And that’s the recipe that makes so many Israelis happy despite the rush-rush of their society and the roar-roar of some Palestinian neighbors demanding their destruction.

Zionism isn’t the only way or the best way, it’s just my way, my people’s way. I’m not smart enough to improvise another framework.

Identity Zionism includes commitments to Jewish education, Jewish action, to making Jewish ethics come alive, to Jewish peoplehood and Jewish community – these are core Zionist values I, for one, would – in Churchill’s words – never surrender.

Today, the #MeToo conversation spotlights how often victims – especially women — internalize persecution, letting bullies win. Anyone interested in abandoning Zionism first should ask: How much of this internalizes the delegitimization campaign?

If we don’t stand up for ourselves, who are we? If we let those haters win, what are we? And if we don’t start celebrating and reclaiming the Z-word now – at Israel’s 70th – then when?

(Gil Troy is the author of “The Zionist Ideas,” which updates Arthur Hertzberg’s classic work “The Zionist Idea,” and was just published by The Jewish Publication Society. He is a Distinguished Scholar of North American History at McGill University. Follow on Twitter @GilTroy)