Rashida Tlaib and Ilhan Omar should be allowed to visit the Palestinian territories, but only if they visit Israel first 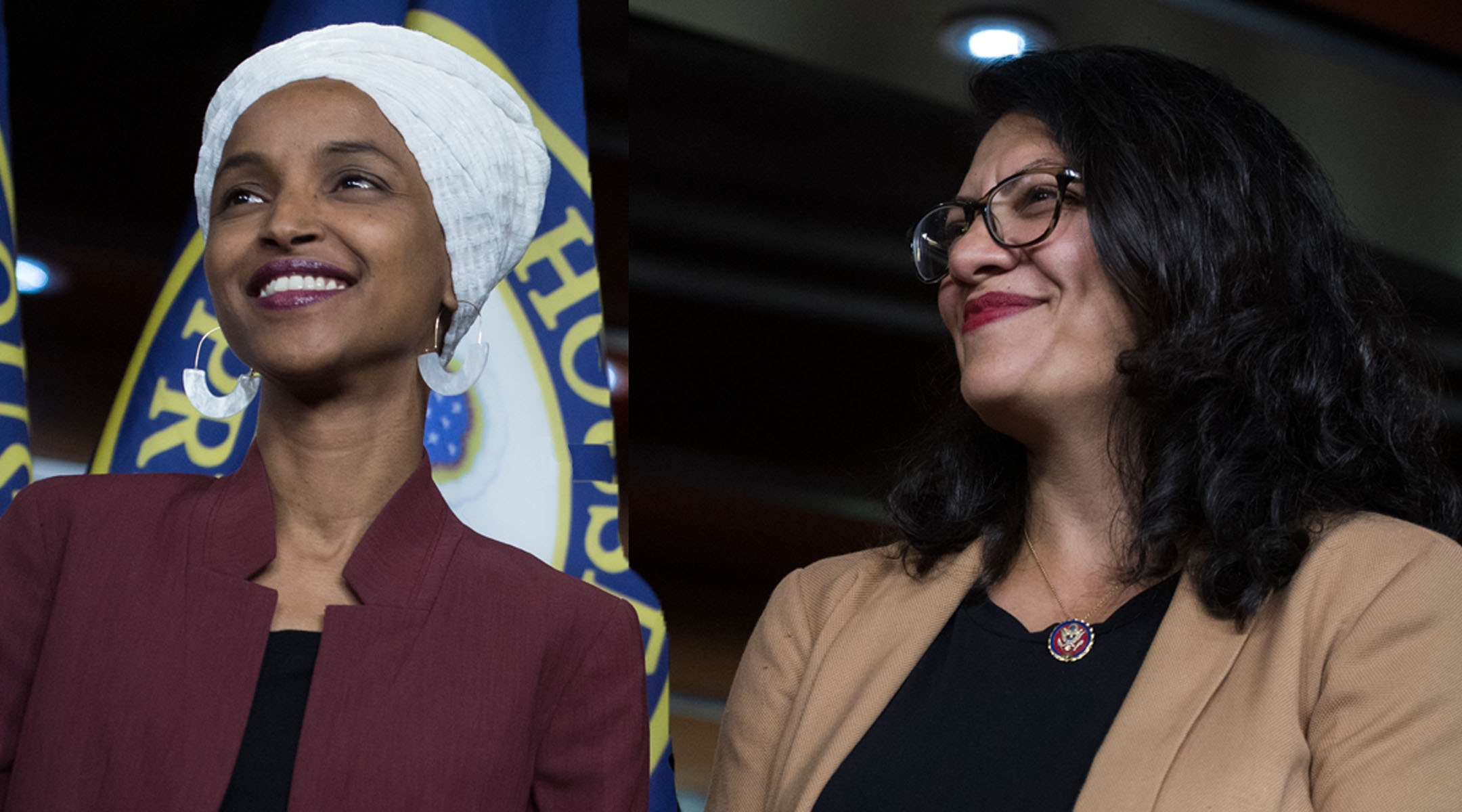 NEW YORK (JTA) — If ever there were two people who had no business setting foot on Israeli soil, they are Congresswomen Rashida Tlaib and Ilhan Omar. Today, Israel announced that these two Muslim-American elected officials, avowed supporters of the Boycott, Divestment and Sanctions movement against Israel, would be banned from entering.

Under Israeli law, the country may deny entry to any visitor who makes a “public call for boycotting Israel” or “any area under its control.”

Tlaib and Omar likely planned to use Israel as a prop in their ongoing escapades in anti-Jewish, anti-Zionist propaganda, and of course the ban should apply to them: They traffic in anti-Semitic tropes, distort crucial facts of Middle East history, desecrate Holocaust memory and, most hypocritically, by demonizing and delegitimizing the one free country in the Middle East, they show themselves to be utterly lacking in personal integrity and moral responsibility.

Given that they are the first Muslim women to be elected to Congress, perhaps instead of landing in Israel and misapplying words like “human rights,” “colonialists,” “racists,” “apartheid” and the “confiscation of Arab lands,” they should be visiting with the assorted and sordid dictators, monarchs and theocrats who lead neighboring Arab and Muslim countries, repressive societies that adhere strictly to Sharia Law and allow for the lashing, dismembering and beheading of women, the torching of homosexuals, the murdering of apostates and the jailing of jurists and journalists.

Instead, Tlaib and Omar wish to direct the cameras of CNN, BBC and MSNBC so they can be filmed browbeating Israel — the only democratic, liberal society anywhere in the region encompassing the Middle East, the Persian Gulf and Northern Africa, about its comparative human rights record.

It’s all so intellectually dishonest and morally vulgar.

And yet, that’s precisely why Israel should let Omar and Tlaib in — despite the anti-BDS law.

Let them come. Israel, after all, is an open society, and it has nothing to fear from two politicians out for a hateful joy ride. They can even bring the cameras. Treat these two legislators like legitimate heads of state, even though they represent the fringe of the progressive wing of the Democratic Party.

Except on one condition. Before they parade around Ramallah, they should first be required to make a pluralistic pilgrimage, a series of necessary pit stops that should be obligatory for all bad-mouthing, ill-intentioned, defamatory and cynical visitors to Israel.

Go ahead, trash the Jewish state on its own soil. But first you must meet with Arab members of Knesset, who are elected Muslim legislators just like them — except that these Arab citizens of Israel make speeches on the floor of the Knesset that would be deemed treasonous if spoken on Capitol Hill. Next, visit the opinion writers of Haaretz, who lambast Israel in ways that would make both Tlaib and Omar, and anyone on any American newspaper, blush.

Go see the Druze who proudly serve in the IDF, and Arab-Israelis who have served on Israel’s Supreme Court, and Yityish Titi Aynaw, the Ethiopian Miss Israel, and the Palestinians who once worked for SodaStream in the West Bank, where Arabs sat together with Jews in the lunchroom and had higher salaries and better healthcare than most Palestinians.

At night, they need to attend a concert in Tel Aviv, like the one that Jennifer Lopez gave recently, and see women who dress however they wish, alongside gay men dressed more garishly than J-Lo, the same men who march in Pride parades and never for a moment think that they might someday hang from a crane.

Jews and Arabs sitting beside each other riding public transportation. Pink washing? I don’t think so.

On what planet does any of this constitute apartheid?

Only then, when they are fatigued from all that Israeli freedom, exposed to the only place in the Middle East where it is safe to be a Christian, and where Arab citizens enjoy rights like no other in that part of the world, after being fed with shakshuka and dizzy from far too many grapevine dances, can Tlaib and Omar proclaim the many ways that Israel falls short from being a perfect democracy.

They should be treated like any other member of Congress who visits Israel. That means they must see Israel — all of it.  Not just the West Bank.  And when they do, they will return to the United States with a clearer understanding as to why democratic Israel must remain a staunch ally and a valued friend.

Welcome to Israel, ladies of the American Congress. Have a safe journey home. Thank you for letting the world see what you saw on your visit to Israel.

Thane Rosenbaum
is a novelist, the author of "How Sweet It Is!," "The Golems of Gotham," "Second Hand Smoke" and "Elijah Vislble," among other works of fiction and nonfiction.
The views and opinions expressed in this article are those of the author and do not necessarily reflect the views of JTA or its parent company, 70 Faces Media.