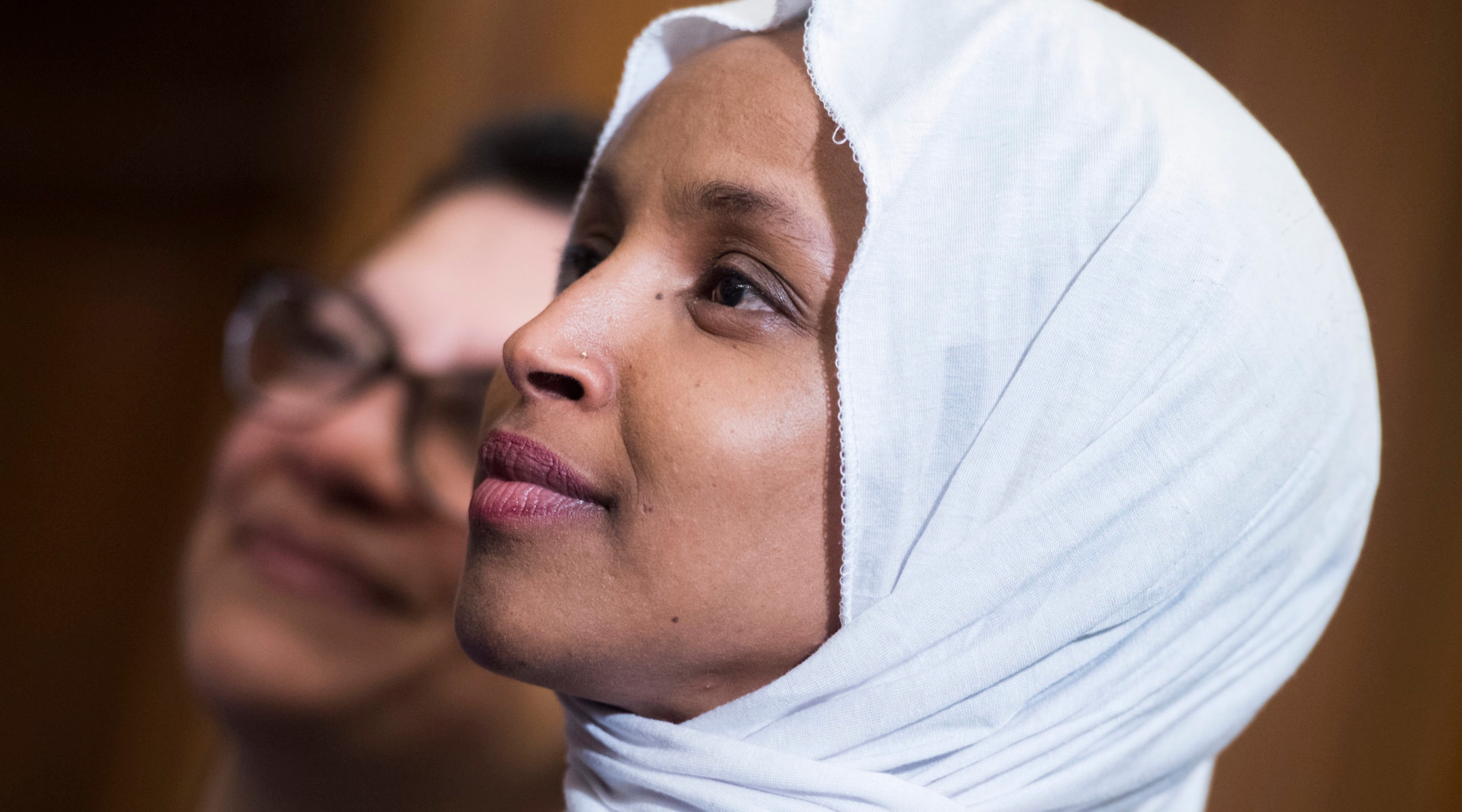 Reps. Ilhan Omar and Rashida Tlaib had no plans to visit Israel while in the area. (Tom Williams/CQ Roll Call)
Advertisement

JERUSALEM (JTA) — During the past few days in Israel, a debate has broken out about the proposed visit of U.S. Reps. Ilhan Omar and Rashida Tlaib to the Palestinian territories. Both Democrats, Muslims and vocal critics of Israel, the congresswomen apparently were planning a not uncommon fact-finding trip to the region while Congress is on recess — before Israel made the decision to ban them.

Omar and Tlaib had been planning to visit Hebron, Ramallah and Bethlehem, as well as Israeli-annexed eastern Jerusalem, including a visit to the Al-Aqsa mosque. Tlaib had been planning to stay on to visit relatives in her parents’ former home. In the last few hours, the flip-flopping Netanyahu government has said it will allow Talib to visit her relatives in the West Bank on humanitarian grounds as she pledged to abide by any restrictions and not to promote boycotts against Israel, but the Michigan lawmaker decided that she will not be going “under these oppressive conditions.”

Silencing me & treating me like a criminal is not what she wants for me. It would kill a piece of me. I have decided that visiting my grandmother under these oppressive conditions stands against everything I believe in–fighting against racism, oppression & injustice. https://t.co/z5t5j3qk4H

What made this proposed visit significant was that the congresswomen had no plans to visit Israel during their time in the area, and that they hold clearly expressed concerns about the occupation and the conditions of Palestinians living under Israeli control.

Originally it seemed that Israel would follow precedent and allow the elected officials of its most important ally to visit. But seemingly under pressure from President Trump, the Netanyahu government decided to stop their planned visit.

But there are many in Israel, where I am now, who believe strongly that prohibiting these members of Congress from coming would be a bad mistake. As the former Israeli consul general in New York Alon Pinkas put it, “These are congresswomen of the majority party, which most American Jews vote for.” Many of the Israelis who agree with Pinkas and think this ban is a bad idea are not likely to vote for Netanyahu or his political allies in the Israeli elections due in a few weeks. And those in America who agree are probably not likely to vote for Trump.

The fact that the Netanyahu government has acceded to the president’s “advice” is a reflection of the fact that it long ago put itself firmly in sympathy with the Republican Party and Trump administration, both of whom have singled out these two Democrats as public enemies of Israel, with Trump, in a widely criticized statement, having infamously suggested the American-born Tlaib and the U.S. citizen Omar “go back to where they came from.”

Trump has also singled out these two women in his campaign against the Democrats in the race for the White House and control of Congress in the 2020 elections. It is obvious that he is trying to use Israel to punish his political enemies, and Netanyahu is no less interested in showing that his political enemies are aligned with the enemies of the state.

Of course, siding with Trump, as well as making any efforts to limit the members of Congress from meeting with Palestinians, or from visiting the mosque on the Temple Mount, plays right into the hands of those who want to point out how the Israeli occupation has been baneful and unfair.

After all, when Eid-el-Adha fell this year on the same day as Tisha b’Av, Israeli authorities permitted approximately 1,700 Jewish visitors onto the mountain on which sits the Al-Aqsa mosque. How does it look if Israel allowed Jews on the mountain for their holy day but now limits visits from Muslim members of Congress?

To restrict these two Democrats will only serve to alienate many young American Democratic voters, as well as the progressive wing of the American electorate — and in the long run harden their opposition to Israel. It will feed the argument that Israel treats Palestinians poorly and unfairly, and that it is no better than the Arabs who for years limited access to Jews who wanted to visit their holy sites when they were under Muslim rule. And it will allow the world to paint Israel as far from being the open society it claims to be.

Indeed, Omar lost no time in pointing out that “The irony of the ‘only democracy’ in the Middle East making such a decision is that it is both an insult to democratic values and a chilling response to a visit by government officials from an allied nation.”

In fact, the Israeli government would have been far better off, as many Israelis have been saying, had it done all it could to enable these two prominent Muslim congresswomen to see what and who they want. More than that, the government could have extended an invitation to them to meet with whomever they want among Israelis as well.

It might have offered them a “deluxe” visit, taken them to Mount Herzl and its military cemetery, Yad Vashem and Neve Shalom, the joint Arab and Israeli village. There is much they would have benefited from seeing that would give the world another side of the story. But instead, Israel has given the lawmakers and their voters the ammunition that shows the world the most negative side of the country and confirms all the accusations leveled against it. Now even moderate Democrats who generally support Israel will have to take a stance against the Israeli ban, which is so wrapped up in the political agenda of Trump Republicans. A major supporter of Israel, House Majority Leader Steny Hoyer, called the Israeli decision “outrageous.”

It is also worth remembering that there is nothing sinister about Muslims wanting to be at their holy places, about a Palestinian American whose parents were born in Palestine wanting to visit that place from which her family immigrated and where her grandmother still lives. Returning as a newly seated U.S. congresswoman (and not just an American relative) to the village that is understandably so proud of her is part of the long-held American tradition of elected officials going back to the places of their ethnic origins. As an ally of the United States, Israel understands this well.

Who knows if the visit of the two, if allowed to go on with minimal control from Israel, could not have served as an opening for peace? It is worthwhile to remember that one makes peace not with one’s friends but with one’s adversaries. That is how swords are turned into plowshares.