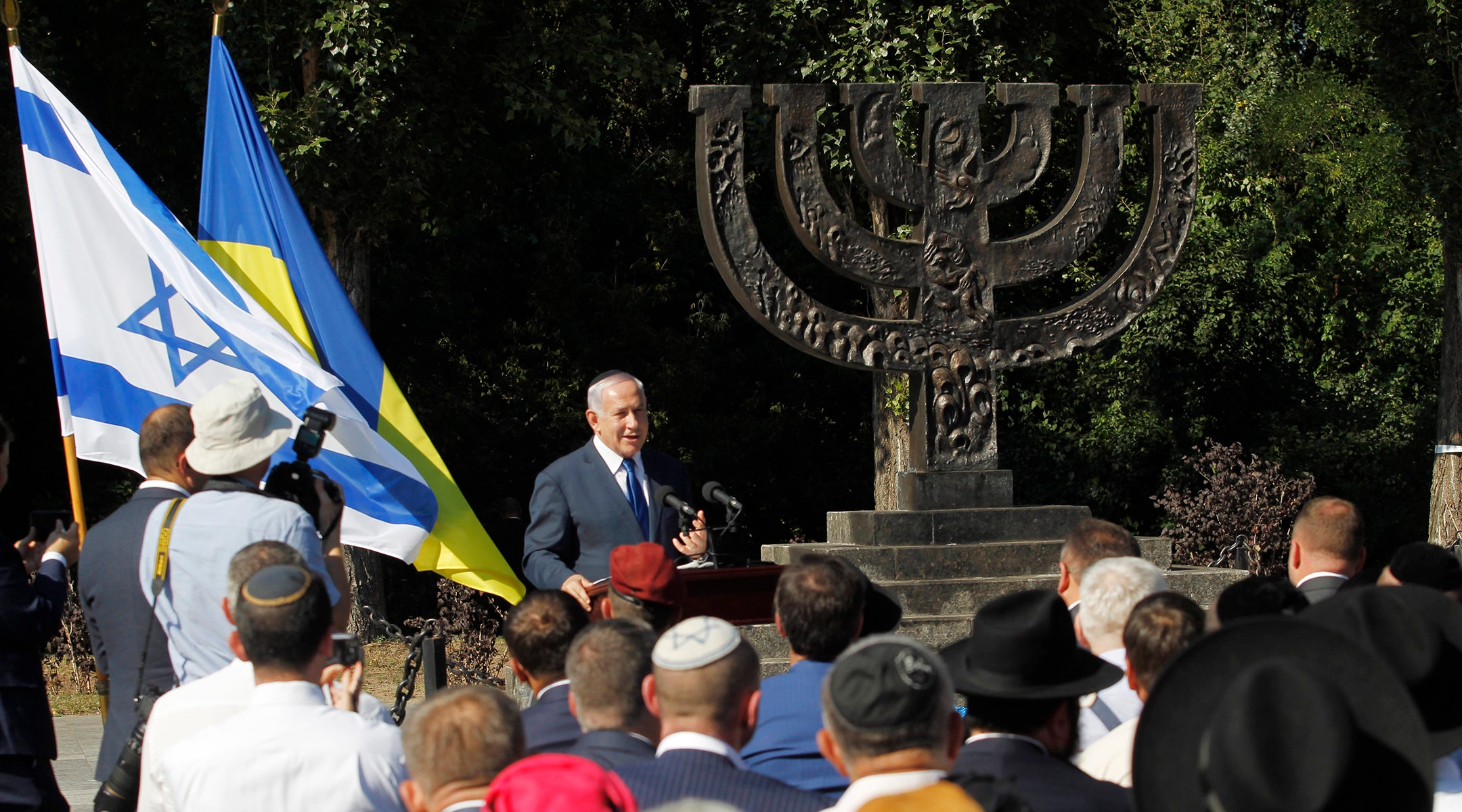 (JTA) — Speaking at a Holocaust commemoration event near Kiev, Israeli Prime Minister Benjamin Netanyahu said the actions of the Nazis and their collaborators at a former Ukrainian killing site show how Jews need to defend themselves.

That may seem like a harmless statement, but in Ukraine the topic of Nazi collaboration is a highly sensitive subject. The country has endured several major controversies after bestowing honors to those who fought alongside the Nazis against the Soviets.

Netanyahu spoke Monday at the Babi Yar site, a patchwork of ravines on the margins of the Ukrainian capital where Ukrainian auxiliary police took about 33,000 Jews to be murdered by German soldiers on Sept. 29 and 30, 1941.

Among those at the ceremony were dignitaries including Vlodymyr Zelensky, the first Jewish president elected in Ukraine. Netanyahu’s previous visit to Ukraine as prime minister was in 1999.

Netanyahu in his speech praised Ukrainian non-Jews who risked their lives to save Jews from the Holocaust. But on several occasions he also addressed the role that Nazi collaborators had in the Holocaust.

After saying the Holocaust was carried out by “the Nazis and their collaborators,” Netanyahu also said that “with one swipe of their sword, the Nazis and their partners ended a thousand years” of coexistence between Jews and Ukrainians.

He further said that the murders at Babi Yar “didn’t happen on a different planet, but minutes away from Kiev’s bustling center. The murders of Babi Yar by the Nazis and their collaborators prepared the murder of the Jews of Ukraine.”

Netanyahu in previous commemoration speeches has spoken of collaborators, but he does not always. In his 2016 Holocaust Remembrance Day address, for example, he did not talk about collaborators despite mentioning the Nazis 11 times.

“To humanity, Babi Yar is a warning sign,” Netanyahu said. “To Jews, it’s a timeless command: We’ll always defend ourselves by our own force against any enemy.”

Zelensky did not mention collaboration in his speech.

“We cannot forget and forgive” the events at Babi Yar, Zelensky said. “The Ukrainian people will always remember crimes against humanity. We will never forget what racism and xenophobia lead to.”

Zelensky told reporters that he had asked Netanyahu to recognize as a genocide the 1932 Holodomor famine caused by Soviet policies, but Netanyahu did not.

The Ukrainian media devoted some attention to claims that Sara Netanyahu, the prime minister’s wife, insulted Ukrainians by throwing a piece of bread offered to her at a welcome ceremony to the ground.

Benjamin Netanyahu received the piece of bread from a welcoming party of three women on the tarmac of an airport in Kiev upon landing. He dipped the bread in salt and bit off a piece, offering the rest to his wife, but she reportedly quietly dropped it to the ground without tasting it in what many Ukrainians online described as a show of disrespect.

Andriy Bohdan, head of the office of the president of Ukraine, dismissed the claims, saying Sara Netanyahu, who wore an outfit featuring the Ukrainian national colors to the welcoming ceremony, had “no intention” of disrespecting Ukraine.

Israel and Ukraine signed a free-trade agreement earlier this year. During the trip, Zelensky announced the opening of a Ukrainian government high-tech and investment center in Jerusalem. Netanyahu has urged many world leaders he has met to follow the United States in moving their embassies to Jerusalem from Tel Aviv.

Israel will open its own high-tech and investment center in Kiev.

Zelensky, a former comedian who won the presidency last month, expressed admiration for Israel’s defense capabilities during his swearing-in speech in May.

“We must become Icelanders in soccer, Israelis in defending our land, Japanese in technology,” he said.