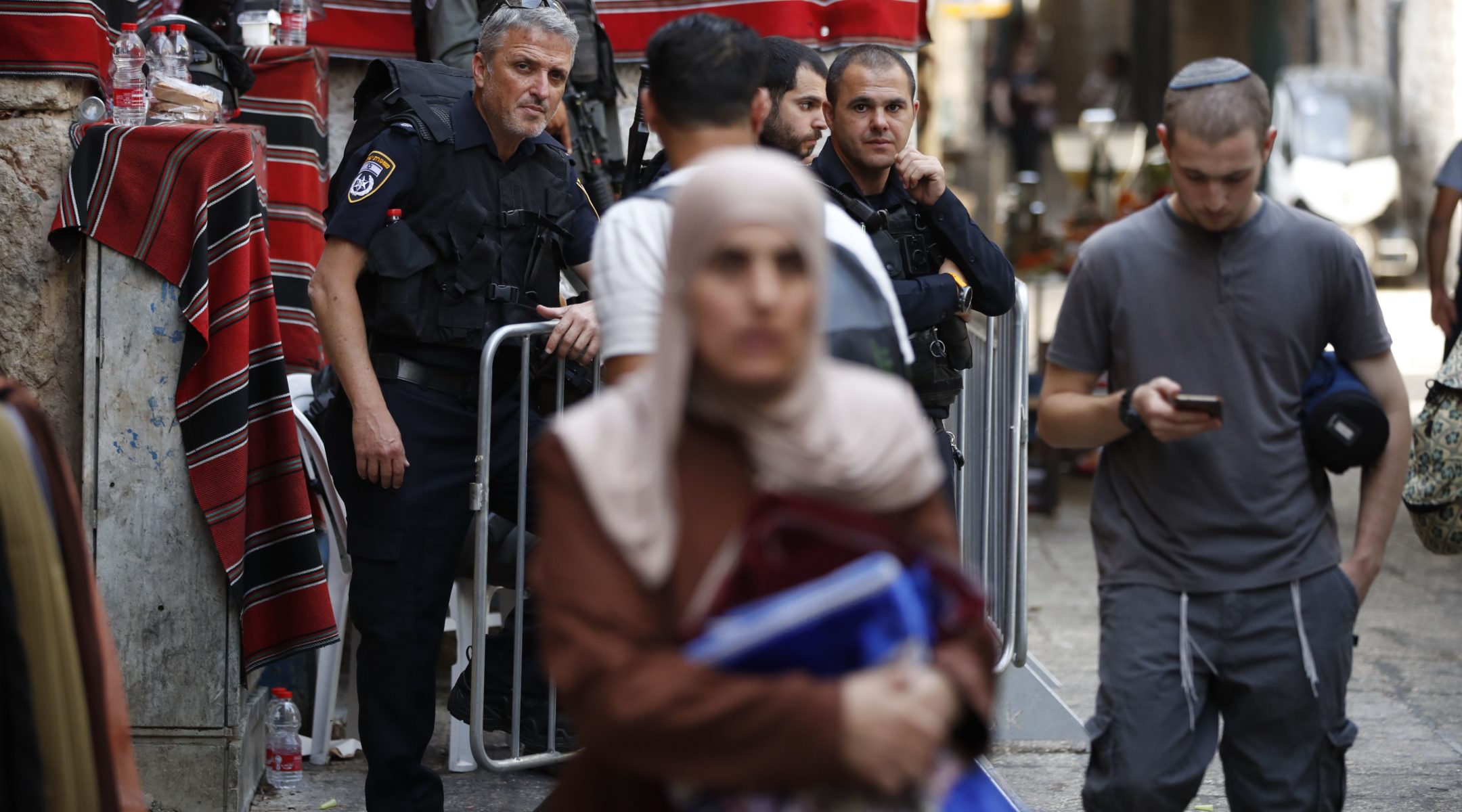 Israeli security forces stand guard in one of the alleys of Jerusalem's Old City following a knife attack, May 31, 2019. (Thomas COEX / AFP)
Advertisement

JERUSALEM (JTA) — Fifty-two years ago, following the Six-Day War, Israel took control of the eastern part of this city. After annexing additional Arab villages to the north and south, it created what we know today as East Jerusalem, where approximately 200,000 Jews and 300,000 Arabs live.

While Israel became the sovereign ruler of these territories, it did not fully integrate East Jerusalem and its Arab residents. A short stroll in the Arab neighborhoods today reveals a dire picture of decades-long neglect and lack of investment by the majority of Israel’s governments: garbage piling up on the streets, residential buildings in disarray, broken sidewalks, playgrounds nowhere to be seen. This neglect, combined with a lack of law enforcement that allows crime and terrorism to breed, intensifies the feeling of insecurity among both Jews and Arabs.

Some argue, in light of the continuous turmoil in eastern Jerusalem, that it would be in Israel’s best interest to wash its hands of this part of the city. A few policymakers have even gone so far as to propose separating from certain hostile neighborhoods and handing them over to the Palestinian Authority. They all base their claims on supposedly Zionist grounds: to ensure that the State of Israel, and its capital in particular, remain predominantly Jewish and secure.

In truth, however, repudiating our responsibilities in East Jerusalem defeats Israel’s Zionist purpose and is incompatible with its national interests. Instead of giving up on East Jerusalem, the Israeli government should work to integrate its Arab population and help this community flourish.

The work we do is often criticized from both the left and the right. Because we advocate for firm Israeli sovereignty and support legislation that strengthens Israeli national identity, such as the Nation State Law, those on the left sometimes claim that our work normalizes the occupation. From the right, we are criticized for putting Palestinians at the center of our work while there are other pressing needs within Israeli society.

But exercising firm Israeli sovereignty and ensuring minority rights should not be interpreted as conflicting concepts, but rather as interdependent ones.

Israeli authorities have not been well received, to say the least, in most Arab neighborhoods, many of which are led by local rival clans. Yet the tactics of sweeping the problem under the rug has only increased the hostility toward the Israeli government and kept entire communities alien to the idea of Israeli rule. Meanwhile, external entities such as the Palestinian Authority, Islamic radical movements and even countries like Turkey and Jordan have gained footholds in East Jerusalem, working tirelessly to undermine Israeli sovereignty through violent anti-Israeli messages, the distribution of disinformation and the intimidation of anyone who is willing to cooperate with Israeli authorities.

For this reason, we should think twice before embracing plans to separate from Arab neighborhoods behind the security fence. Even if executed successfully, absolute disengagement could bear harmful consequences in the future: There is always the danger that the cut-off territories will not be within reach of Israeli control, which will encourage more radicalization, while at the same time strengthen the P.A.’s grip and influence over these areas.

Other proposals offering a middle way include forming independent city councils for the Arab neighborhoods behind the fence headed by their own elected representatives. These plans, too, must be carefully considered while taking into account Israel’s national interests, security considerations and residents’ rights.

Whichever resolution is decided upon, the need to bridge the gaps between the two parts of the city remains in place. Indeed, initiatives to improve the living conditions in East Jerusalem prove that integration is possible. In recent years, we have witnessed the success of bottom-up efforts by nongovernmental organizations and the Israeli police, which were met with genuine desire for collaboration by the Arab residents.

One example is the Institute for Zionist Strategies’ Tzur Baher Rights’ Center, which was opened in conjunction with local Arab community leaders with the goal to increase the residents’ awareness of their rights and social benefits. Institute volunteers assist residents in navigating Israeli bureaucracy as they pay bills, request a property tax discount and register their children in school.

“With sovereignty comes responsibility,” says Miri Shalem, the institute’s CEO. “Marching through the walls of the Old City on Tisha b’Av is nice, but to achieve true sovereignty, we need to create actual change on the ground.”

“This is their point of contact, a place to get assistance and explanations, it is indeed heartwarming,” she says, adding later that “I hear from residents who keep asking me every day, ‘when is it [the center] open? When can we call?'”

These empowering programs are supported and promoted by local community leaders, most notably Ramadan Dabash, who recently ran for the Jerusalem City Council.

Every year, radical Islamic organizations take advantage of the vacuum created during the summer vacation to run activities that incite the youth in East Jerusalem against Israel. In one of these P.A.-funded summer programs, children are trained in hand-to-hand combat by Palestinian police officers and chant nationalistic songs of praise to Palestine.

In an attempt to counter some of these radicalization efforts, the Institute for Zionist Strategies works with the Israeli police to offer an alternative to the East Jerusalem youngsters in the form of weekly Hebrew classes. This way, Arab children and youth are empowered to integrate into Israeli society and create a better future for themselves rather than perpetuate hate and despair.

Perhaps even more encouraging than the police reporting that these programs reduce terror and violence among youth are the responses of the volunteers and the students. One of the Arab volunteers at the rights centers reports: “I know these encounters don’t end in the classroom. For many of us, we meet people we otherwise would never interact with.

“This is how we reduce the hate and violence. By meeting one another, face to face, as people.”

Noa Lazimi
is the Research Coordinator at the Institute for Zionist Strategies. She holds an MA in International Relations.
The views and opinions expressed in this article are those of the author and do not necessarily reflect the views of JTA or its parent company, 70 Faces Media.