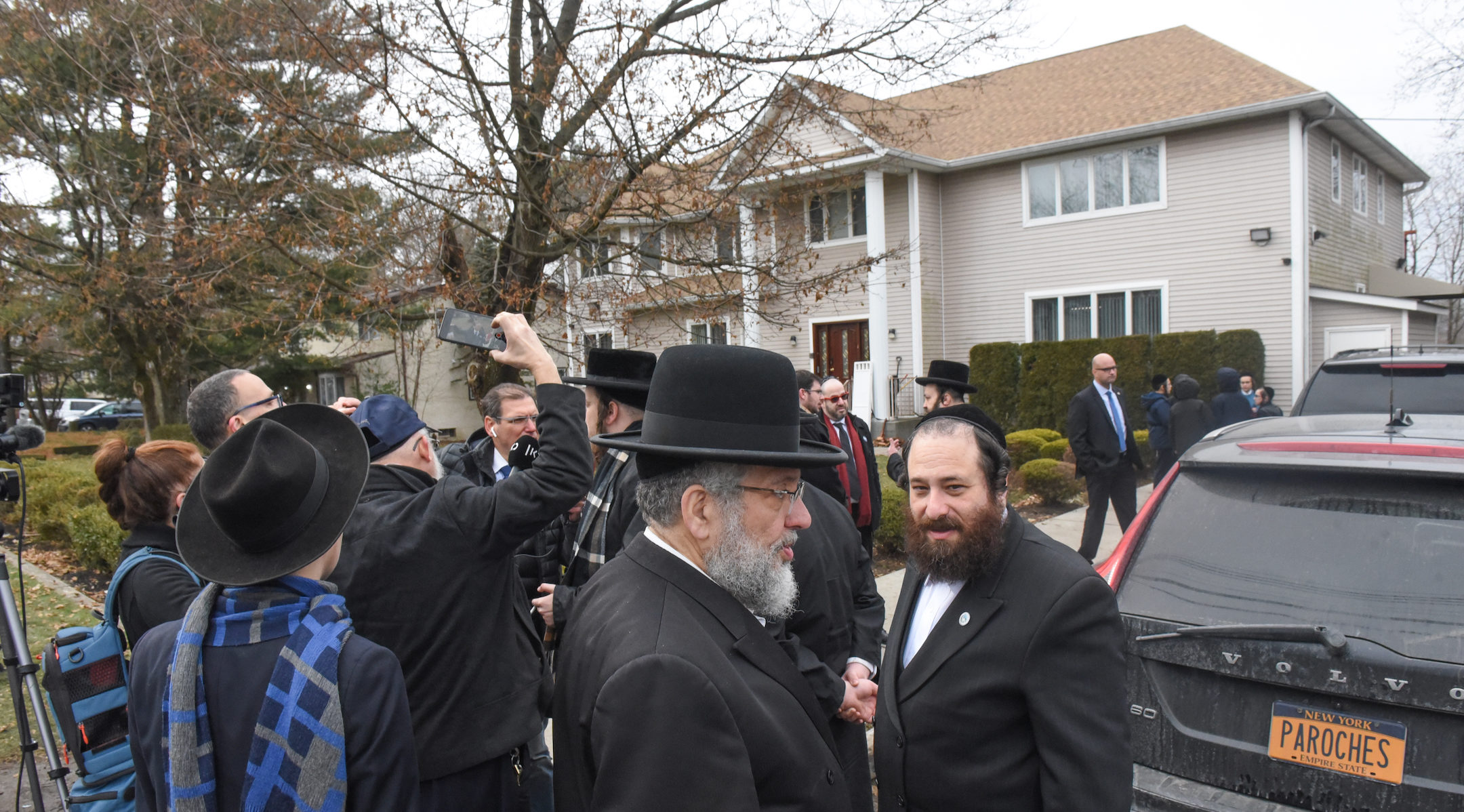 Members of Rabbi Chaim Rottenberg's community in Monsey, N.Y., gather in front of the house where five people were injured in a knife attack during a Hanukkah party. (Stephanie Keith/Getty Images)
Advertisement

MONSEY, N.Y. (JTA) — A short while after the worst anti-Semitic attack ever carried out against haredi Orthodox Jews in New York, those present in the Forshay neighborhood of Monsey witnessed an unbelievable scene.

At Congregation Netzach Yisroel, the synagogue attached to the rabbi’s house in which the horrific attack took place, the Rebbe of Koson, Rabbi Chaim Rottenberg, sat down to celebrate a Hanukkah and Melave Malkah Tish.

Together with his Hasidim, ignoring all of the chaos and panic outside, he sang songs and praises to the Almighty for all of the Jews who miraculously survived the attack.

The rebbe spoke with the community, quivering while reciting the words from Song of Songs 4:8, “you shall look from the peak of Amanah” — emphasizing that, according to the Jewish tradition, we are to sing to the Lord and have faith in his salvation, even before he delivers it. The wounded and badly injured Jews, including at least one of his sons, were being brought to the operation room — but he implored us to “thank the Almighty for the generosity that he will certainly show with their ultimate complete recovery.”

How many times throughout history has the strength of the Jewish faith been demonstrated before the eyes of the whole world?

The same strength played out at a Torah dedication ceremony the next morning. The community had just come away from a terrifying tragedy and the rebbe’s house was still a crime scene with blood everywhere. But we Jews do not raise our hands in resignation. No! We did not give up in the concentration camps, when Jews were set on fulfilling commandments, despite life ostensibly having no more meaning, and we will continue not giving up.

Vile attacks and murders bring out the horror in a small amount of people, but they much more bring out the beauty and nobility of the great majority of God’s creatures.

The hero of the Monsey story, Yosef Elyah Glick, talks down his role (throwing a table at the attacker) with humility, saying that God gave him the strength and will to do what he did.

But in his interview with CNN, his message to the political leaders was that they must do their duty to condemn anti-Semitism and violence in all circumstances, and not use their positions to incite negative emotions among races and communities.

That is, in my opinion, the strongest message that can be taken from the attack. The natural friends of Orthodox Jews are other minority communities next to whom we live. A large part of the black, Latino and Muslim communities, our neighbors, look at us religious Jews as their natural allies against a world of enmity and hate.

Regrettably, some hotheads and pundits try to fuel hatred among the various communities for their own political interests. But I cannot count how many times I personally have received favors from members of minority communities. Take away the self-serving political officials who pit one community against another due to vile political interests, take away the demagogues, and you have terrific communities who live side by side in harmony and happiness.

When I stopped at a gas station on Skyline Drive in Ringwood, New Jersey, several weeks ago, the gas station attendant dropped everything and volunteered to show me which products were kosher. He himself uses kosher symbols, he explained to me, because he eats halal.

My twin boys were raised with the help of a black woman who developed a taste for cholent and gefilte fish and was extraordinarily loyal to my children. After the attack in Monsey, she called to express worry and sympathy about what happened.

On a recent trip, I stopped to visit the Ghostly Manor Haunted House in Sandusky, Ohio, noted as one of the top-rated haunts in the United States. Waiting to go in, an African-American family came up to me and asked me to go in front of them — the place is so scary and they were afraid to go in alone. I wondered to myself if a white American family would have similarly trusted a haredi Jew with beard and sidelocks.

After the earthquake in Haiti in 2010, Rockland County Legislator Aron Wieder arranged a massive campaign to procure hundreds of thousands of dollars in donations from the haredi community of Rockland to send to those suffering in Haiti as a friendly gesture to the Haitian community of Ramapo.

When the community heard in 2014 that a lowlife had stolen money collected for the burial costs of a Latino child who died in a tragic accident, haredi Jews quickly came up with the money to cover the damages. After the attack in Jersey City, while mourning our own victims, haredi Jews secured tens of thousands of dollars for the family of Douglas Miguel Rodriguez, the immigrant from Ecuador who was a good friend to the the city’s small haredi community.

Haredi leaders like Yosef Rapaport, Alex Rapaport and Chesky Deutsch have used the terrifying tragedy to heal wounds and improve relations between the Hasidic and African-American communities of Jersey City — by organizing, among other things, a large venture to help the local black and Hasidic communities.

The haredi community is also blessed with having outstanding relations with minority politicians who are fighting for our rights and of late have been the right messengers to fight anti-Semitism. The attorneys general of New York and New Jersey have positioned themselves against Jew haters with a strong hand because, as minorities themselves, they are sensitive to our pains. (The predecessor to Letitia James in  New York seemed to care little for the wave of anti-Semitism despite being Jewish.)

Unfortunately, there are also hotheads who position themselves as friends of the community only after we come under attack: people who stoke emotions against haredi Jews and call them all sorts of names, and then, when something happens, come into haredi neighborhoods with a group of people and declare that only they can protect us from our enemies.

About these people we say the known proverb from Rashi: “Don’t give me the honey and spare me the sting.” Thanks but no thanks.

We also do not need any help from demagogues who are busy after every attack with ridiculous finger-pointing, whether there is more white anti-Semitism or more black anti-Semitism, if the Jew haters are more likely to be found in the right camp or more on the left, and which parties are taking the danger to Jews more seriously.

Jewish blood is flowing like water and these people are busy with political accounting.

The haredi community also must be wary of the hotheads and demagogues who incite them to throw under the bus those officials like Mayor Bill De Blasio of New York, who has paid a heavy political price for the sin of treating all the communities in New York fairly.

And we must be wary of those who say that guns are the answer. From the time that haredi children are very small, we learn to despise weapons. The words of my teacher ring in my ears: “Our strength is only with our mouth (praying to the Almighty).” When we learned the Talmud tractate of Shabbat, the teacher pointed out that the sages say (63a) that a person is not allowed to go around with a weapon on the Sabbath because their purpose is “shameful,” they are a disgusting item. We always heard from our religious leaders that the weapon of a Jew is the voice of Jacob (Genesis 27:22).

They educated us to be pacifists and talked to us about how nice it will be when the Messiah comes, when “nation shall not lift the sword against nation, neither shall they learn war anymore.” (Isaiah 2:4)

The great majority of haredi Jews do not want to take up weapons. Jews who come to the Hanukkah lighting of their rebbe, like those who had to struggle against a murderer with a big machete on Saturday night, are generally the type of people not to kill a fly.

I still remember when I brought home a toy gun for Purim and my mother took it, saying that “Jews don’t have a use for guns.”

How is it that certain haredi Jews can be heard expressing support for the gun policies of the NRA for the safety of a community that despises “you shall live by the sword”? (Genesis 27:40) It is critical that there should be stricter laws to ensure that no harmful guns and deadly weapons come into the hands of criminals, anti-Semites and terrorists who will use them to hurt innocent people.

This is just a direct result of propaganda from pundits and media figures who use their positions to incite hate, panic, chaos and hatred, and convince Americans to support issues directly antithetical to their interests.

In their warped minds, we Orthodox Jews are not good Jews unless we condemn political officials who they consider insufficiently pro-Jewish. They will not rest until they create a gigantic division between us and the nearby communities, and between us and our responsible political leaders.

The good news is that our communities are gifted with responsible leaders who shake off the politics of enmity and hate — and who do not allow for outsiders with blind intentions to overcome us and ruin our friendly relationships. So much progress has been made in recent years in Ramapo to smooth out the relationships among the communities. There is still much work to be done, but we will stubbornly continue to extend an olive branch to our neighbors and live with them in peace and harmony.

“A little bit of light dispels a lot of darkness,” said the holy Baal Tanya, Rabbi Schneur Zalman of Liadi. It is up to us to be that light.

This article, originally written in Yiddish, was translated by Professor Nick Block.

Shimon Rolnitzky
is a writer, activist and Hasidic resident of Monsey, New York.
The views and opinions expressed in this article are those of the author and do not necessarily reflect the views of JTA or its parent company, 70 Faces Media.