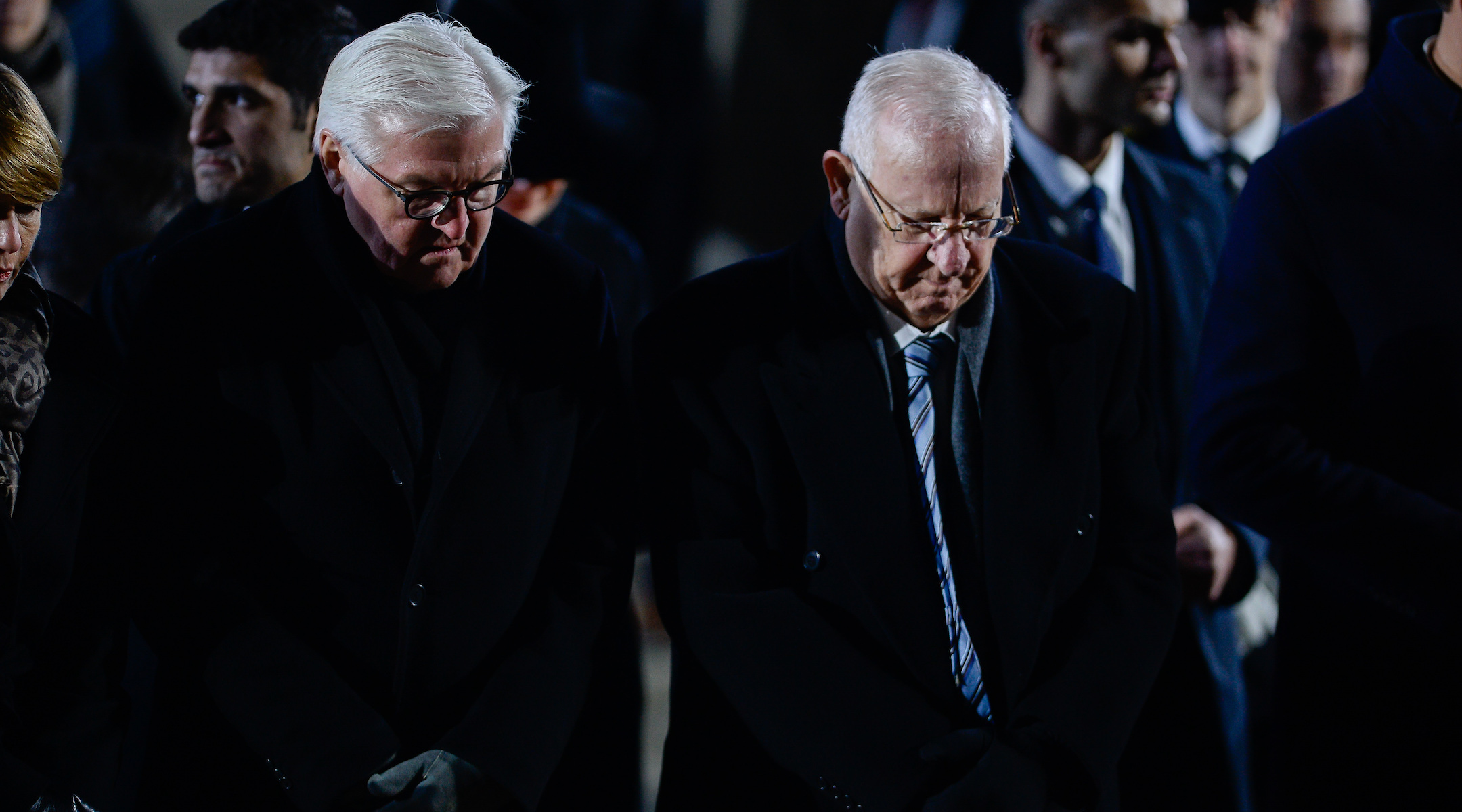 Held in the dead of the Polish winter on Jan. 27, the day the Soviet Union liberated the former Nazi death camp in 1945, the annual ceremony offers participants an inkling of the hardships endured here by inmates struggling to survive with only pajama-thin uniforms.

Attending “certainly has a certain effect, and I recommend it,” said Bloch, a Lithuania native who now lives in Israel.

But while Bloch recognizes Auschwitz’s unique power, she decided to commemorate the liberation this year in Jerusalem, where she was joined last week by dozens of heads of state and other survivors at a ceremony at the Yad Vashem Holocaust museum. The event, described as the largest diplomatic gathering in Israel’s history, arguably overshadowed a commemoration held Monday at the site of the concentration camp in southern Poland.

“I was moved beyond words to do it not in Europe, but in our own Jerusalem, in our country,” Bloch said.

Israel’s preeminence in the commemoration this year of the 75th anniversary of the liberation of Auschwitz is reigniting a decades-long debate over whether Europe or Israel is the most appropriate venue to host Holocaust remembrance events.

The tension was on full display last week as Israel hosted the World Holocaust Forum, an event funded by European Jewish Congress President Moshe Kantor and organized in partnership with the Israeli government and Yad Vashem.

The run-up to the event was dominated by Polish President Andrzej Duda’s decision to boycott amid a dispute over being denied a speaking slot — a decision he followed up with a speech to Polish Jewish leaders asserting that Poland was the rightful place to hold such a gathering. (An Israeli official said later that Duda had been offered “some kind of platform” to speak.)

But the attendance of Russian President Vladimir Putin, U.S. Vice President Mike Pence and French President Emmanuel Macron among other world leaders was nonetheless an unprecedented tour de force that helped burnish both Israel’s international standing and its image as chief guardian of the memory of the Holocaust. It also commanded much media attention, which some argued stole the Auschwitz event’s thunder.

Piotr Cywinski, the director of the Auschwitz-Birkenau State Museum, complained in an interview with The Times of Israel that the decision to hold the event in Israel was “pathetic and immature.” Duda said that Auschwitz was the natural place to commemorate the liberation.

“Deep within my soul I believe that this is the appropriate place, the best one,” Duda said in his speech earlier this month to Polish Jewish leaders, adding that the “stiffening cold makes one truly comprehend the horror of the place.”

“I believe that one must not deprive [Auschwitz] of its remembrance by transferring it somewhere else,” he said.

Some survivors agree. Salo Muller, an 83-year-old Dutch Holocaust survivor whose parents were murdered at Auschwitz, said he wants to memorialize them in the place where they killed.

“I think about them all the time,” Muller said. “And I’m not against commemorating them anywhere. But when I want to go to say a prayer on their souls, I do it as Auschwitz.”

Kantor, who was born in Russia and now lives in London, took a different view. Holding the ceremony in Israel, the European Jewish leader told The Jerusalem Post earlier this month, connects the Holocaust to the contemporary fight against anti-Semitism.

“With the alarming rise of anti-Semitism over the past years, and the 75th anniversary milestone, I thought that Israel, the Jewish state and Yad Vashem in particular would be the most suitable place to hold it,” Kantor said.

Such competing attitudes are part of a longstanding tension between advocates who understand the Holocaust in universalist terms as a human tragedy and those who insist that it is first and foremost a Jewish one. Rabbi Avraham Krieger, the director of Israel’s Shem Olam Holocaust Institute for Education, Documentation and Research, said the two attitudes are not mutually exclusive.

But the struggle between them is complicated by growing efforts in Europe to shift the Holocaust narrative. In 2018, Poland passed a law that made it illegal to accuse the country of complicity in Nazi crimes, sparking a diplomatic crisis with Israel. Ukraine and Latvia have passed similar laws, and Lithuania is considering one.

“There are growing attempts to rewrite or otherwise control the narrative of the Holocaust in Eastern Europe, where the killing took place,” Krieger said. “Israel taking up a more central role in Holocaust commemoration is a good development because it’s not part of this problem.”

Israeli officials have occasionally spoken out about the revisionism happening in Europe, though some critics charge that the Jewish state hasn’t been forceful enough.

Prime Minister Benjamin Netanyahu last year said it was “outrageous” to talk about “Jewish collaborators” with the Nazis, as Prime Minister Mateusz Morawiecki of Poland did in a 2018 interview with an Israeli journalist.

In October, in his first public comment about the widespread denial of Lithuania’s complicity in the Holocaust, Israeli Ambassador Yosef Levy told a group of history teachers that it was vital to be honest about the past.

“The most patriotic thing you can do is teach history honestly,” Levy said in a speech in Vilnius.

In Ukraine, Israeli Ambassador Joel Lion broke a long silence last year when he spoke out against the state-sponsored veneration of Nazi collaborators, sparking a protest by the Ukrainian Foreign Ministry.

Some Holocaust survivors say they prefer to memorialize the Holocaust at Auschwitz precisely to combat this sort of revisionism.

Edward Mosberg, a 94-year-old recovering cancer patient from New Jersey who flew to Poland with a medical team for this year’s commemoration, said it was vital to remember the genocide on European soil, “especially now when there are so many politicians lying about history.”

But Poland’s role as the locus of Holocaust remembrance comes with its own set of complications and sensitivities. For one thing, the existence of a functioning church on the grounds of Auschwitz continues to be seen as an affront by some Jewish leaders. For another, the camp is at the center of a growing industry in Holocaust tourism that many critics find distasteful.

Still, few would deny that the site is a powerful educational tool.

“In Israel, the children hear the sirens and they get told, they know,” Bat-Sheva Dagan, a 94-year-old Polish survivor, said in a speech Monday at the camp, referencing the air raid sirens sounded in Israel to commemorate the Holocaust.

But, she added, “It is this place that tells this story.”