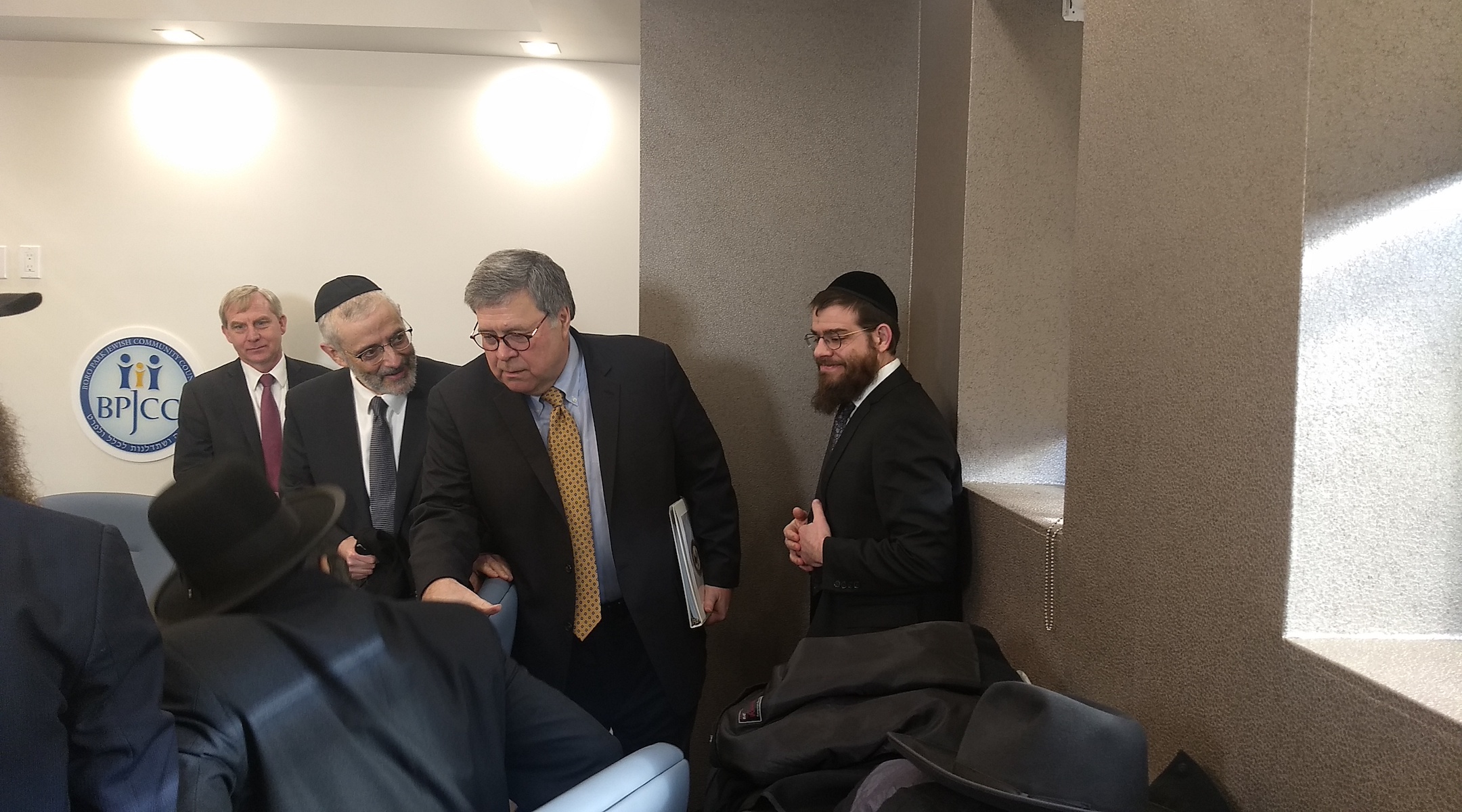 NEW YORK (JTA) – In a meeting Tuesday with Orthodox Jewish leaders in Brooklyn, U.S. Attorney General William Barr pledged to track and prosecute hate crimes more aggressively on the federal level while also blaming the rise of anti-Semitism on what he called “militant progressivism.”

Barr’s concrete proposals for stopping anti-Semitism included an enhanced system for reporting hate crimes, as well as better tracking of white supremacists on social media. He pledged that the Trump administration and his Justice Department would have “zero tolerance” for anti-Semitism, which he said “strikes at the very core of what this country is about.”

He rejected the idea that President Donald Trump bore any of the blame for the national rise in anti-Semitism, a notion raised by one of the participants. Instead he put the blame on the left.

“Unfortunately anti-Semitism is a very ancient disease, and historically the right wing has been the main perpetrators of it, but we also see progressivism and the left wing now participating in a variety of ways,” Barr said, adding later, “They demonize their opponents, people who disagree with them and resist, or don’t fit into the mold or don’t do the kinds of things that they think are the best way of organizing society.”

The meeting follows two violent attacks on nearby Orthodox communities in December – a shooting at a kosher supermarket in Jersey City, New Jersey, that killed four and a stabbing at a Hanukkah party in the upstate suburb of Monsey that left five injured.

Also in the past few months, Orthodox Jews in Brooklyn have been the targets of frequent harassment and assaults. According to the New York Police Department, anti-Semitic incidents through September rose 50 percent over the previous year and made up a majority of reported hate crimes in the city.

Barr outlined several steps that the Justice Department is taking to prevent anti-Semitism.

The attorney general is instructing every U.S. attorney to establish processes and an address in their office for reporting hate crimes and staying in touch with local Jewish leaders, as well as a system to determine whether those crimes should be addressed on the federal or state level. He also wants to define which ostensibly nonviolent symbols or actions could signal a physical threat toward Jews — akin to cross-burning as a racist symbol.

And Barr wants the department to watch out for antisocial or white supremacist threats on social media, similar to how it tracks jihadists. Previously, the Trump administration scaled back some efforts to track white supremacists online.

Barr also pledged to prosecute more hate crimes on the federal level. He announced that the Justice Department has charged Tiffany Harris, a Brooklyn woman who made headlines for slapping three Jewish women and then being released, with hate crimes.

“These are the kinds of cases that maybe in the past would have been treated locally, but I think it’s important for the federal government to plant its flag,” he said. “We will move aggressively when we see this kind of activity.” 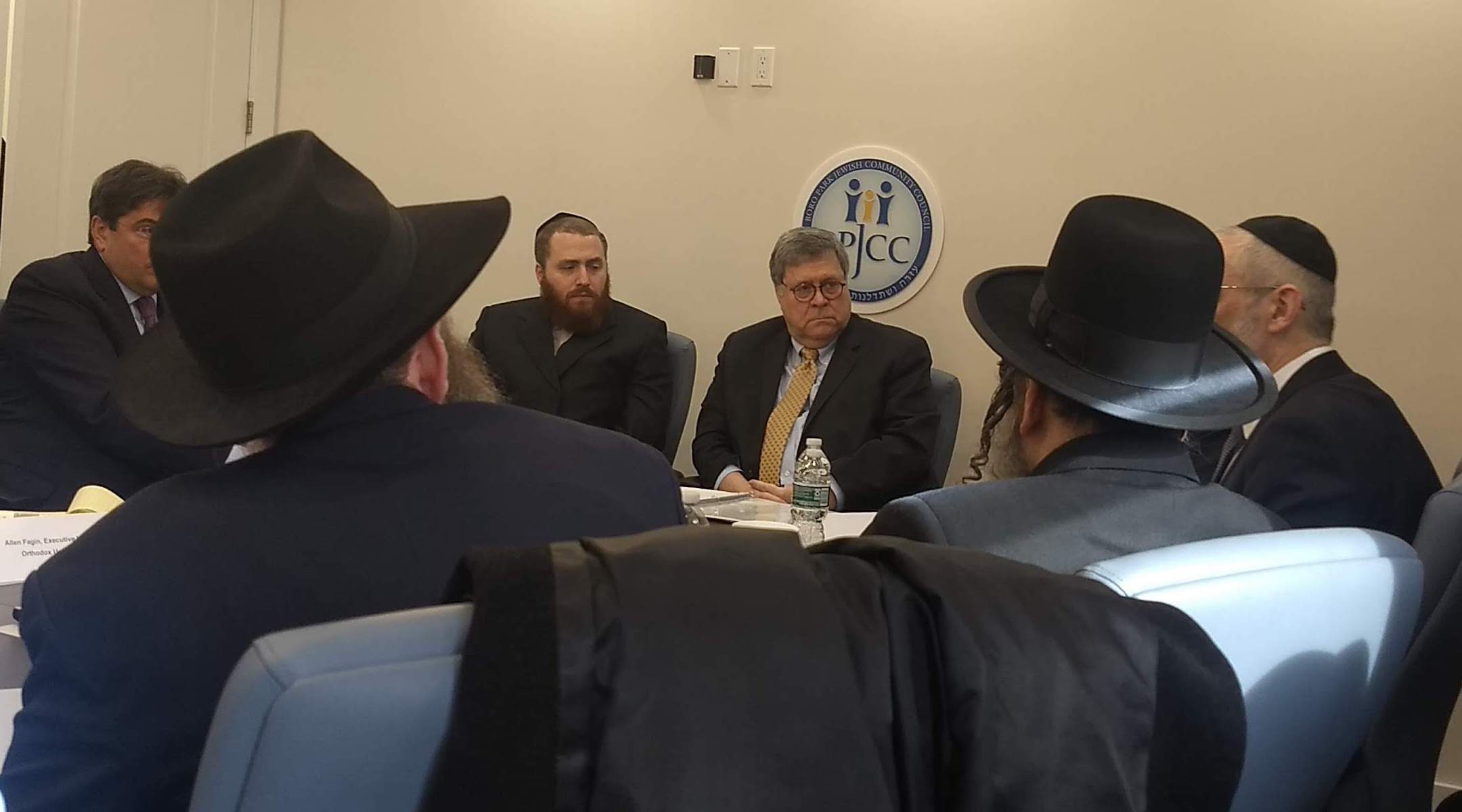 Barr speaks to Orthodox leaders in Brooklyn, Jan. 28, 2020. His indictment of progressive values struck a chord with the largely traditionalist group. (Ben Sales)

Barr’s indictment of progressive values struck a chord with the largely traditionalist group of leaders.

“I personally appreciated very much what he said when he spoke about the larger moral climate and the values American society has always embraced, and how are they being undermined today in a progressive new world,” said Rabbi David Zwiebel, executive vice president of Agudath Israel of America, an umbrella haredi, or ultra-Orthodox, group.

The participants in the meeting thanked Barr for coming to Borough Park and praised his proposed changes.

They also called for increased federal security funding for houses of worship, as well as an increased police presence around synagogues. In December, Senate Minority Leader Chuck Schumer, D-N.Y., called for the quadrupling of federal grants to nonprofit institutions at risk of terrorism, like synagogues, to $360 million from $90 million.

“Longer range, we’d like to see the Department of Justice really get behind a much greater development of resources to community police,” said Allen Fagin, the executive vice president of the Orthodox Union, a major Orthodox group. “The Department of Justice is in control of hundreds of millions of dollars in grants to local police authorities. We need to see some of that money devoted to community policing in Jewish neighborhoods.”

The Orthodox leaders at the meeting also decried proposed regulations in New York state that would force Orthodox yeshivas to teach more secular subjects like math, science and English.

Barr claimed that in the near future, supporters of such efforts will “try to equate traditional Judeo-Christian thought and doctrine as somehow related to hate.” He spoke out multiple times in support of school choice and said his office would look into those educational regulations. Barr also said that the Justice Department would look into local efforts to use zoning laws to prevent Orthodox Jewish communities from expanding into suburban towns in New York and New Jersey.

“What scares me the most is when I see the spiritual hollowing out that’s been occurring in the Western world, and some of it here in the United States. One worries when barbarism is right below the surface,” Barr said.

“There should be separation of church and state, obviously, but we’ve always recognized that religion plays an important role in making sure that a pluralistic society like ours can move forward without these kinds of hatred and violence.”