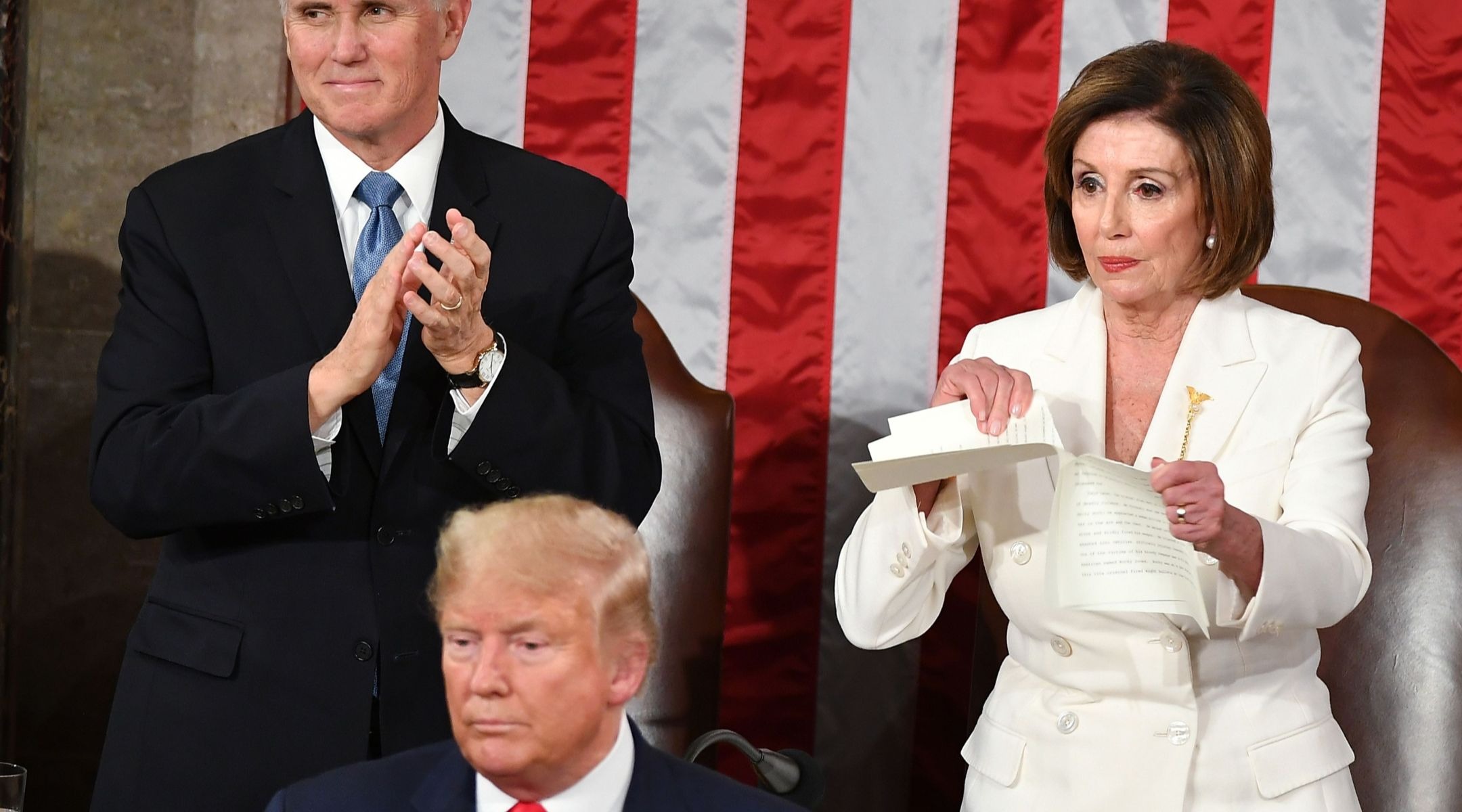 House Speaker Nancy Pelosi rips a copy of President Donald Trump's speech after he delivered the State of the Union address at the U.S. Capitol, Feb. 4, 2020. (Mandel Ngan/AFP via Getty Images)
Advertisement

WASHINGTON (JTA) — President Donald Trump’s re-election campaign is now in overdrive, judging by the way he turned much of his State of the Union into a campaign pitch.

“We are moving forward at a pace that was unimaginable just a short time ago, and we are never going back!” he said on Tuesday night.

In an unusually partisan address, Trump lashed out at the administration of his predecessor, Barack Obama, and took shots at the social democracy embraced by one of his potential Democratic rivals, Sen. Bernie Sanders. There were rehearsed surprises redolent of the reality TV that earned Trump much of his fame, moments of real drama and no discussion of Trump’s soon-to-conclude impeachment trial.

And there were a few moments of Jewish significance, from the Middle East peace plan the president unveiled last week to an unusual disruption to what went unsaid. Here’s what you need to know.

One sentence about Israel: Three times, Trump conjugated “fail” to ding the Obama administration. Once was when he touted the peace vision that his adviser son-in-law, Jared Kushner, rolled out last week at the White House, with Israeli Prime Minister Benjamin Netanyahu in attendance.

“Last week, I announced a groundbreaking plan for peace between Israel and the Palestinians,” Trump said. “Recognizing that all past attempts have failed, we must be determined and creative in order to stabilize the region and give millions of young people the chance to realize a better future.”

It’s been critical for Kushner and Trump to note that the plan, which sanctions Israel’s partial annexation of the West Bank, comes in the place of failed initiatives by Obama and two other presidents, Bill Clinton and George W. Bush. The plan thus far is stuck in neutral: The Palestinians have rejected it outright, while Israeli action is likely delayed until after next month’s elections.

Bipartisan applause for Iran intervention: Trump celebrated his administration’s most notable kill, the assassination in December of Qassem Soleimani, the top Iranian general. That brought one of the rare moments of applause from both sides of the aisle.

Trump also extended the possibility of peace with Iran if the country capitulates to his demand that it halt its nuclear program entirely (Iran insists it is not a weapons program) and cease its adventurism.

“The Iranian regime must abandon its pursuit of nuclear weapons, stop spreading terror, death and destruction, and start working for the good of its own people,” Trump said. “Because of our powerful sanctions, the Iranian economy is doing very poorly. We can help them make it very good in a short period of time, but perhaps they are too proud or too foolish to ask for that help.”

The overture to Iran, however cautious, fit into an overarching theme of the foreign policy portion of Trump’s speech: the need to end U.S. involvement in overseas conflicts.

“It is also not our function to serve other nations as a law enforcement agency,” Trump said. “These are war fighters, the best in the world, and they either want to fight to win or not fight at all.”

Support for private schools: One rehearsed surprise reality TV-friendly moments came when Trump announced that Janiyah Davis, a fourth-grader from Philadelphia who was present, would receive an “opportunity scholarship” — money to attend whichever schools she prefers, public or private.

Trump used the moment to tout his administration’s signature education legislation, a bill that would expand the scholarships. That was music to the ears of many Orthodox Jews who favor increased public funding of Jewish day schools. The legislation, which Congress has not advanced despite Trump’s urging, would create a national version of programs that exist in 18 states.

Trump also declared that he would protect “the constitutional right to pray in public schools,” but mentioned only Christian symbols, such as crosses. A Jewish parent in the 1960s spearheaded the case that led the Supreme Court to restrict organized school prayer.

Renewed attacks on undocumented immigrants: A big chunk of Trump’s speech was a vivid and grim depiction of migrants as criminal threats. He was touting a Republican bill that would allow victims to sue cities that had offered sanctuary to migrants who go on to commit crimes.

“The United States of America should be a sanctuary for law-abiding Americans — not criminal aliens!” Trump said.

Jewish groups, particularly HIAS and T’ruah, have been at the forefront of the sanctuary movement since Trump first cracked down on undocumented migrants. They note that the crimes cited by Trump and his aides are not representative of a population numbering in the millions.

Disruption by a grieving Jewish father: When Trump spoke about protecting the Second Amendment, which guarantees the right to bear arms, one person in attendance shouted out in protest and was quickly escorted from the room.

That person was Fred Guttenberg, the father of Jaime Guttenberg, one of 17 students and teachers murdered during the school shooting two years ago in Parkland, Florida. Guttenberg, who has dedicated himself to protesting for gun safety, had been present as a guest of House Speaker Nancy Pelosi, D-Calif.

“Tonight was a rough night. I disrupted the State Of The Union and was detained because I let my emotions get the best of me. I simply want to be able to deal with the reality of gun violence and not have to listen to the lies about the 2A as happened tonight,” Guttenberg later wrote on Twitter.

“That said, I should not have yelled out. I am thankful for the overwhelming support that I am receiving. However, I do owe my family and friends an apology. I have tried to conduct myself with dignity throughout this process and I will do better as I pursue gun safety.”

“We were disappointed that the president did not acknowledge the alarming rise of anti-Semitism in the United States,” B’nai B’rith International said in a statement that praised Trump’s foreign policy initiatives. “With Jews under attack — physically as well as through relentless social media assaults — a plan to combat anti-Semitism would have fit in well with his overall themes of security and equality.”

The theme of combating anti-Semitism may have been absent from Trump’s speech, but it was in the chamber. Rep. Bill Pascrell, D-N.J., brought as his guest Rabbi Zev Reichman of the East Hill Synagogue in Englewood, a beneficiary of nonprofit security grants championed by Pascrell. The grants have helped numerous Jewish institutions add security protections.