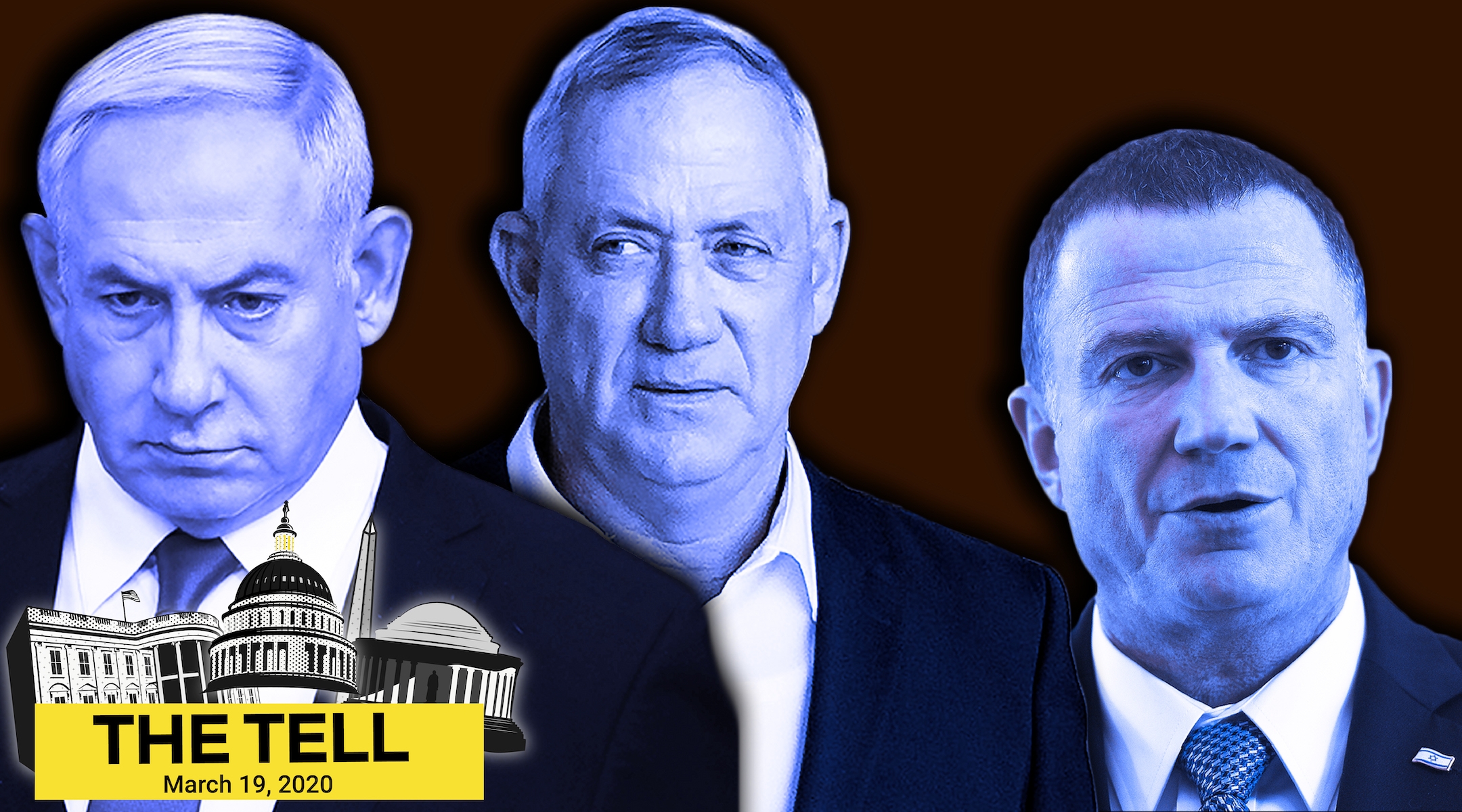 WASHINGTON (JTA) — Politics goes on in a time of fear and quarantine, and each shapes the other.

In my world, the coronavirus outbreak has led to at least three interesting developments over the past couple of weeks:

1. Israeli Prime Minister Benjamin Netanyahu is drawing sharp criticism from political foes for what they say is his using the pandemic to preserve his hold on power, resorting to means that are undercutting his nation’s democratic institutions.

2. The crisis has accelerated what already was likely a sure thing: Bernie Sanders’ exit from the Democratic presidential stakes.

3. It also has upended expectations of how the presidential election will play out, with the focus shifting from corruption to competence, as well as the debate over President Donald Trump’s use of the phrase “Chinese virus.” His critics claim such rhetoric stigmatizes Asian Americans.

Here’s a deeper dive into those developments.

Netanyahu has been given high marks for the breadth of his handling of the coronavirus in Israel. Shuttering the country to outside visitors early in the crisis and setting up clear quarantine protocols may stem its spread.

But now, his critics say, Netanyahu is leveraging the goodwill he has accrued in a three-pronged attack on Israel’s democratic institutions — one that veteran journalist Noga Tarnopolsky described in the Daily Beast as “a power grab unprecedented in Israeli history.”

* Amir Ohana, Netanyahu’s justice minister, put the courts in a state of emergency mode, as my colleague Marcy Oster has reported. The immediate effect is a two-month postponement of what was to have been the March 17 start date of the prime minister’s corruption trial.

* Yuli Edelstein, Netanyahu’s Likud colleague and the Knesset speaker, suspended convening the new parliament until Monday, saying that he wants to give the parties time to put together an emergency national unity government to tackle the virus. Edelstein said it would be unhealthy to pack so many people into the chamber. His move prevents the 61 Knesset members who favor Netanyahu’s rival Benny Gantz as prime minister from convening. (Gantz has a long way to go, but since the March election he is closer to forming a coalition, thanks to the support of the mostly Arab parties, than he had been in the wake of balloting in April and September.)

* Netanyahu’s government has also authorized police to track the cellphones of those infected with the coronavirus without needing warrants. It’s a means of containing the spread, but it also sets a Big Brother-like precedent that has spooked civil libertarians.

Netanyahu casts the measures as temporary and aimed at containing the pandemic, but together they have spurred alarm in some circles. Hundreds of protesters on Thursday attached black flags to their cars and attempted to enter the city to protest the measures.

“For now – and the clock is ticking – Israeli democracy has been shut down,” Anshel Pfeffer, Netanyahu’s definitive biographer, said in Haaretz.

The criticism isn’t only coming from the left. President Reuven Rivlin, in an extraordinary move, called Edelstein and urged him to open the parliament — and, also extraordinarily, distributed his remarks to the media. “A Knesset that is out of action harms the ability of the State of Israel to function well and responsibly in an emergency,” Rivlin said. “We must not let this crisis, as serious as it is, to harm our democratic system.”

Will COVID-19 drive out Bernie?

Bernie Sanders’ campaign for the Democratic presidential nomination likely will not survive the drubbing it took this week in the Florida, Arizona and Illinois primaries. Joe Biden’s delegate lead went from big to enormous.

Still, under non-pandemic circumstances, Sanders may have stayed in — as he did in 2016 — to leverage his withdrawal in an effort to influence party policy. This cycle, though, The Washington Post reports, Sanders may be ready to pull out sooner rather than later so he can help his rival Biden address the legislative demands of the pandemic.

In a profane and charged exchange Wednesday with a CNN reporter, Sanders made clear that the coronavirus and the health care crisis it has triggered, and not his presidential prospects, are foremost in his thinking.

Trump’s impeachment trial feels like years ago. Now the president’s initial flailing response to the coronavirus has become the thrust of Democratic attacks as the election rhetoric shifts focus.

On Wednesday, Biden on Twitter quoted a poll showing a majority of Americans do not trust Trump’s handling of the pandemic and said: “I give you my word as a Biden: When I’m president, I will lead with science, listen to the experts and heed their advice, and always tell you the truth.”

Democrats also are targeting Republicans and Trump for calling the pandemic the “Chinese virus,” which Asian Americans say stigmatizes them.

Jewish groups are hitting this message home. Trump “must condemn this virulent racism coming from his White House, and he has to stop repeatedly using racist terms himself when referring to coronavirus,” Anti-Defamation League CEO Jonathan Greenblatt said on Twitter. An American Jewish Committee assistant director outlined in a JTA op-ed how many Jewish organizations have expressed solidarity with the Asian community.

Trump defenders say the president’s language is aimed at the Chinese government, not Asian Americans. Some pro-Trump pundits have pointed out that earlier on in the crisis, an array of media outlets used similar language to describe the coronavirus.

When “present” means “gone”: Yehiel Kalish, the only rabbi to serve in Illinois’s state legislature, lost a Democratic primary election on Tuesday, mainly because of his “present” vote on a key abortion rights bill that he said went against his Orthodox Jewish values.

Abortion trumps Israel: Jewish Insider reports on how Jewish Republicans slammed pro-Israel Democrats for not rallying to defend Dan Lipinski, a conservative Democrat whose Israel voting aligned with AIPAC and who lost his primary to his J Street-backed challenger Marie Newman. Mark Mellman, who runs the centrist Democratic Majority for Israel, told JI that Lipinski’s domestic policies, opposing abortion rights and LGBTQ rights, were a bridge too far to merit support. “Like most Democrats, we do not believe the incumbent represents the values of the Democratic Party,” Mellman said.

Pushing against earth movers: More than 60 House Democrats have signed a letter to the Trump administration pressing it to assess whether Israel is using U.S. equipment to demolish the homes of Palestinians. 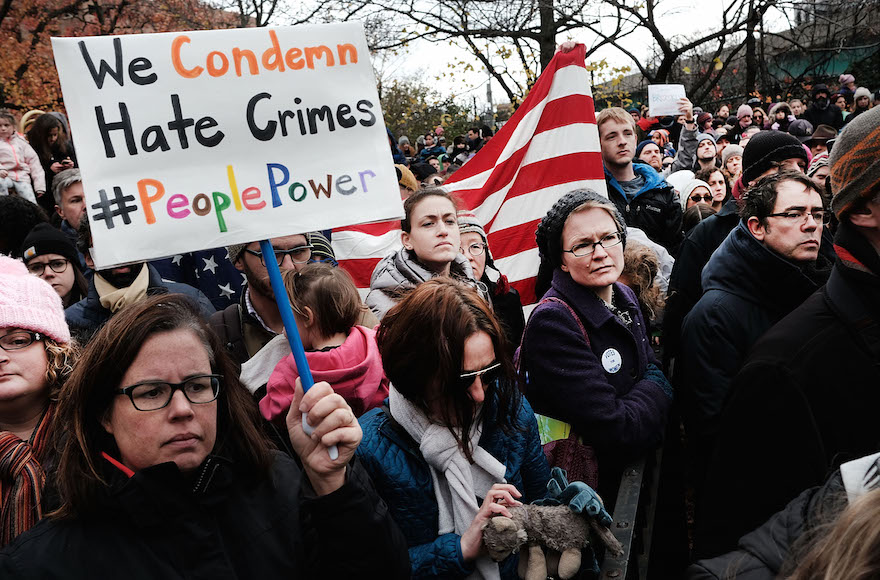 People participating in an anti-hate rally at a Brooklyn park named in memory of Beastie Boys band member Adam Yauch after it was defaced with swastikas in New York City, Nov. 20, 2016. (Spencer Platt/Getty Images)

Anna Russell at the New Yorker speaks to hate crime trackers, including the ADL’s Oren Segal, about the rise in attacks related to the pandemic.

At a time of social distancing, a photo by Jewish Insider’s Jacob Kornbluh captures in a Williamsburg minyan the longing for community.