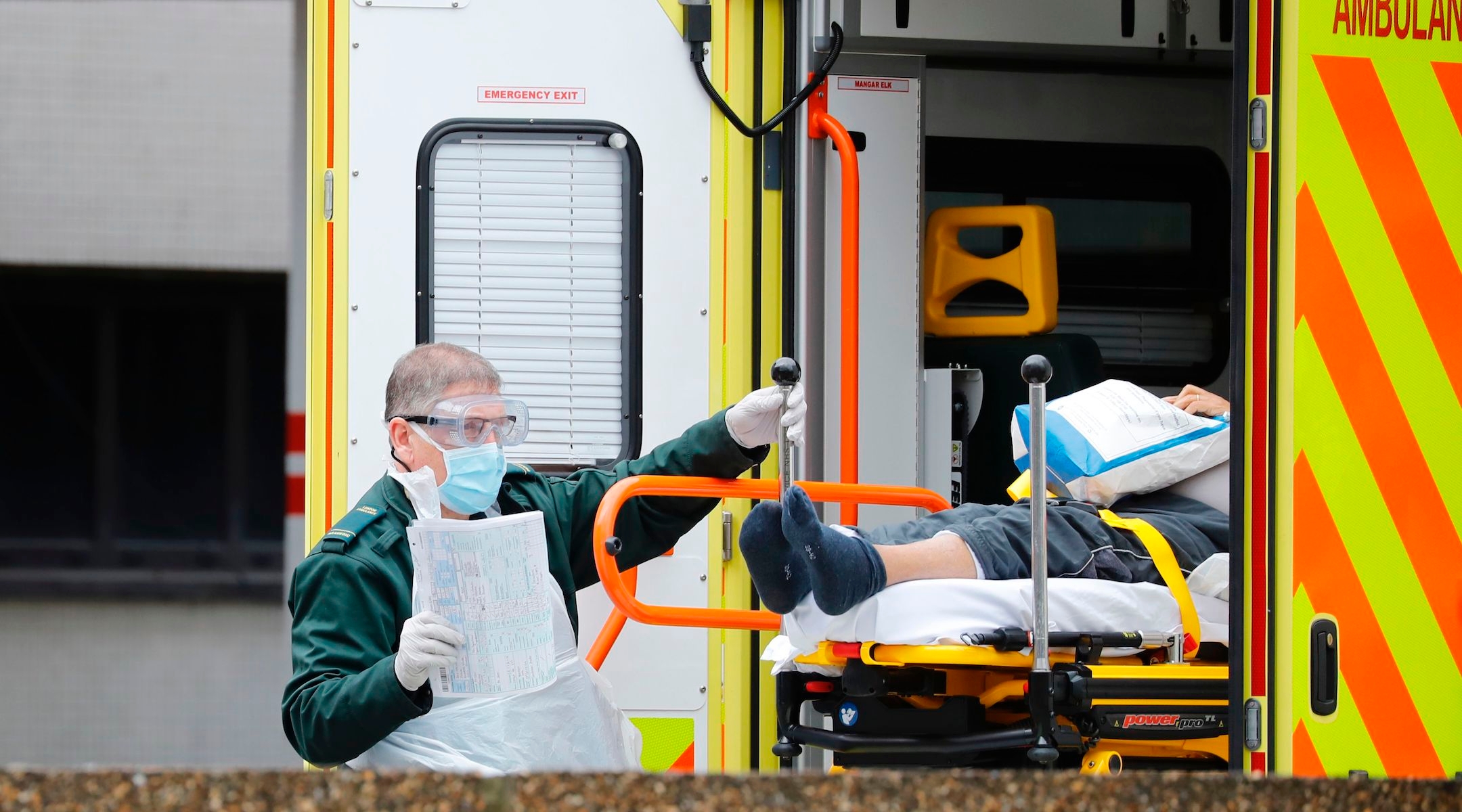 An ambulance worker moves a patient from an ambulance to St. Thomas' Hospital in London, March 31, 2020. (Tolga Akmen/AFP via Getty Images)
Advertisement

But the coronavirus has killed 44 known Jewish victims so far — about 2.5% of the total U.K. tally.

That means British Jews are overrepresented by a factor of eight in their country’s death toll from COVID-19.

The statistics are compiled, released and updated periodically by the Board of Deputies of British Jews, an umbrella group representing British Jewry. The stats are unique because they are the first centralized attempt anywhere in the world at measuring the Jewish death rate and comparing it to a national total.

The figures are raising concerns that British Jews are particularly at risk from the virus. They are also giving rise to multiple hypotheses to explain this reality, though none seem conclusive.

Here are the theories and why they are difficult to prove at this point in the pandemic’s spread.

While Jews do seem to be overrepresented in the national death tally, “the numbers of Jewish deaths being reported so far are, statistically, very small – too small to draw any firm conclusions,” wrote Jonathan Boyd, the executive director of the Institute for Jewish Policy Research, or JPR, a group that researches the demographics of European Jewry, in a Jewish Chronicle op-ed published Monday.

Board of Deputies President Marie van der Zyl told the Jewish Telegraphic Agency about her organization’s monitoring of Jewish fatalities.

“While the figures are worrying, the current sample size is far too small to rule out variance and we cannot use them to come to any definitive conclusions,” she said.

But Boyd added that he “wouldn’t be surprised to see elevated counts among Jews.” More on that below.

Reports of failures to observe social distancing protocols at some haredi Orthodox synagogues and institutions have raised concerns about the spread of the virus among that specific denomination.

“People are touching the same surfaces, the same siddurim,” or prayer books, a health worker told The Jewish Chronicle last week about the heavily haredi London neighborhood of Stamford Hill. “I believe the community is susceptible to the virus because they are so close knit.”

Separately, 20 British Jewish physicians, none of them haredi, also singled out haredim in a pamphlet circulated in Stamford Hill a couple of weeks ago urging them to heed social distancing guidelines.

“You are fully responsible for deaths that occur as a result of ignoring this advice,” the physicians wrote.

Their concern echoed similar warnings in other places with large haredi minorities, including Israel, the United States and Belgium.

But Herschel Gluck, a haredi rabbi and head of London’s Shomrim Jewish security force, argued that “the facts don’t support this hypothesis.”

The disease has claimed several haredi Jews, including Zeev Willy Stern and Uri Ashkenazi. But other victims have included four members of the Modern Orthodox Spanish and Portuguese community in London and two from the Reform community, including a rabbi.

Rabbi Alexander Goldberg, the Jewish chaplain at the University of Surrey near London, agrees with Gluck and he is not haredi. Goldberg believes he contracted and recovered from the virus, although medical authorities did not want to test him when he reported symptoms.

“Among Jews, this disease doesn’t seem to be confined to the haredi population. All sorts of Jews seem to have it,” Goldberg said.

To Goldberg, a former community issues director at the Board of Deputies, “the one thing that the Jews who caught the coronavirus do have in common is that they belong to a group with a high level of mobility.”

Haredi families from Britain travel frequently to visit family in Israel, Belgium, New York and beyond, as do Jewish businessmen regardless of their denomination.

Boyd concurs that mobility may be playing a role. Among Jews of all denominations, “many work in the center of town, travelling in daily by tube, and are very much in the thick of things,” he wrote.

“Collectively, we are wealthier and better educated than average, which also means that we are more likely to travel abroad – another way in which we might have been more likely than others to have picked up the infection early on.”

But Gluck has his doubts.

“The tube had many commuters, the trains were packed,” he said of the London underground and national railway, which operated at full capacity until as recently as March 25, when the United Kingdom introduced a national lockdown (it came more than a week after France had taken the same measure.)

London is home to a number of immigrant groups, including more than 800,000 Poles and 600,000 Italians, who travel back to their countries of origin frequently on low-cost flights.

“It doesn’t stand to reason that Jews would be more exposed because of travel,” Gluck said.

Jews are older than the general population and concentrated in London — the city that has seen the most coronavirus cases of any region in the U.K., and is believed to be several weeks ahead of the rest of the country.

“A London effect may partially explain higher counts” among Jews, Boyd wrote, referencing the fact that 60% of all British Jews live in or around the capital. “The city is an ideal place for a virus to spread, and like New York City in the United States, it is at the vanguard of the epidemic in this country.”

British Jews, Boyd added, are old — “21% are aged 65 and above, compared to 16.4% of the population as a whole, and given that the virus is more virulent among the old than the young, Jews may be disproportionately affected.”

But, he added, Jews are also healthier than average — 5% have bad or very bad health compared to a national average of 5.6%.

That may sound like splitting hairs, but it’s “not an insignificant difference, particularly bearing in mind our age profile,” Boyd wrote.

“[I]t’s due both to cultural factors and our socioeconomic status, both of which have commonly protected us against ill-health,” he continued.

Boyd and several other commentators have noted the proximity of the Jewish holiday of Purim, which fell on March 9, to the outbreak of the coronavirus in Europe.

At St. John’s Wood Synagogue in London, with 1,300 seats one of the city’s largest Jewish places of worship, a rabbi contracted the virus shortly after returning from a Purim celebration in Morocco. He spent many hours interacting with dozens of congregants before he developed symptoms and self-quarantined.

Festivals like Purim “bring even more people together than usual,” helping the virus spread, Boyd wrote.

More broadly, there may be “something about the way in which Jews organize their lives that might inadvertently cause the virus to spread between us,” he added. A quarter of Jewish adults attend synagogue most weeks, whereas the equivalent proportion for church attendance among British Christians is about 10%, Boyd noted.

“These are all perfect environments for a virus to multiply,” he wrote. “So physical social interaction – typically the essential, even obligatory lubricant which underpins Jewish life – now poses a mortal threat.”