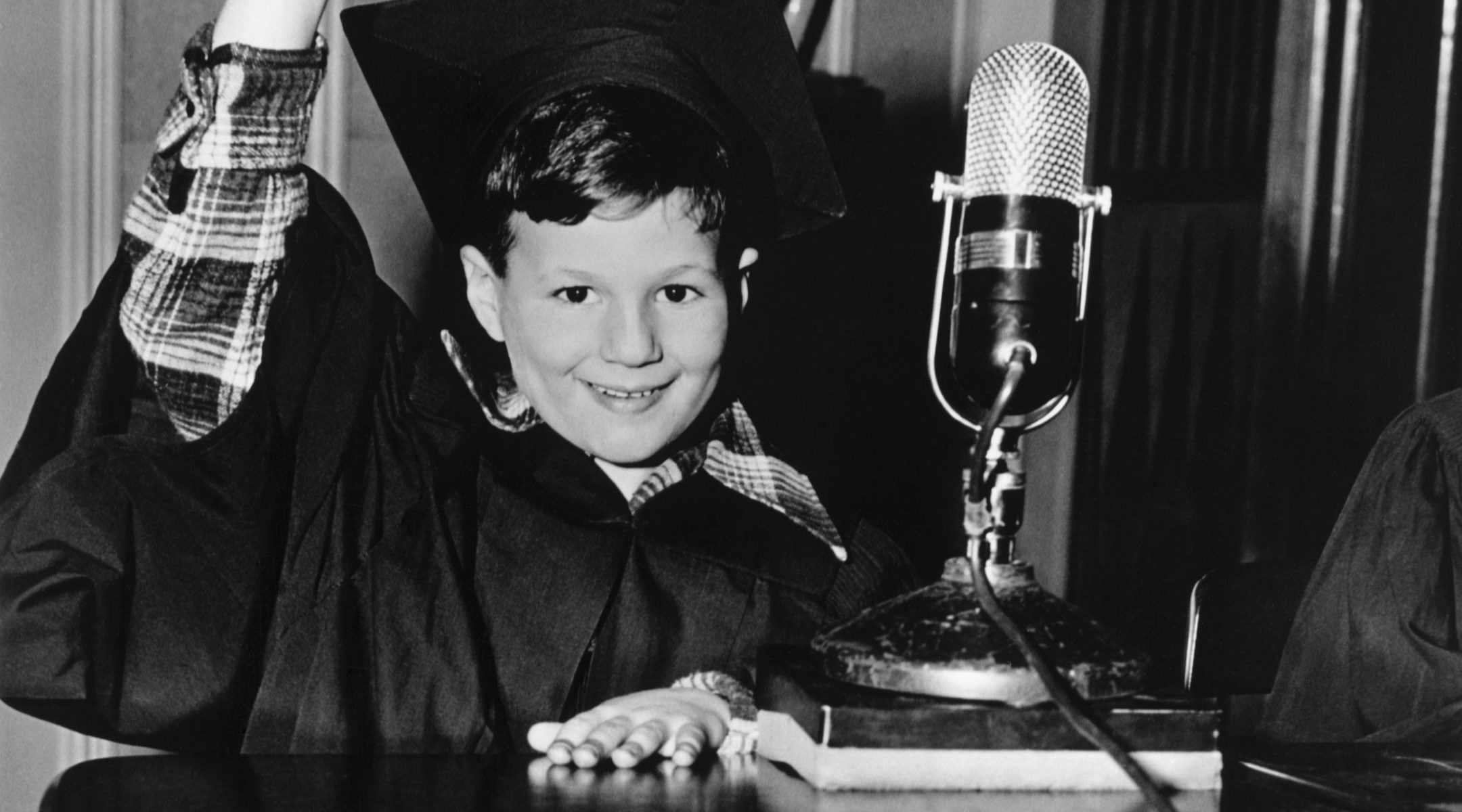 (JTA) — He lisped. He wore an intense and engaged stare in photos. And he knew just about everything.

Joel Kupperman, the adorable child star who helped burnish the stereotype of the brainy Jew as a panelist on the 1940s show “Quiz Kids,” died on April 8, according to an obituary published Wednesday by The New York Times. The death certificate describes an “influenza-like illness (probably Covid-19)” as the cause of death.

“A fairly cute kid who can do math quite well has never been such a big deal at any other time in American history,” Kupperman’s son Michael once wrote of his father. “It could only have happened with a Jewish child, during a war that many people saw as a fight to save Jews.”

Kupperman was one of the original “Quiz Kids,” which aired on NBC radio and then TV in the 1940s and 1950s. Airing a time when Jewish children were being ripped from their parents in Europe, the show, which featured a group of mostly Jewish kids fielding questions about a range of subjects, offered American audiences a Jewish stereotype that inspired affection rather than revulsion.

“When we moved through crowds, there were loud remarks of ‘Oh, they’re all Jews!’” Ruth Duskin, another Jewish panelist on the show, wrote.

The show would inspire J.D. Salinger’s fictional Jewish Glass family, whose children were all featured on a fictional radio quiz show and grew into deeply neurotic adults. Like Kupperman, Seymour Glass fast tracks to a Ph.D. In his 2010 book “Theories of Human Nature,” Kupperman appeared to wink at Salinger as a kindred spirit, describing him as “a well known example of someone who retreated from his celebrity, as did the actress Greta Garbo.”

Kupperman’s awkward persona would also find reflection in roles later popularized by other Jewish child actors:  Barry Gordon in the 1960s, Robby Benson in the 1970s, Corey Haim and Corey Feldman in the 1980s, and Mayim Bialik and Jonathan Lipnicki in the 1990s, through to Jaren Lewison, who plays Ben Gross, the love interest on the breakout Netflix hit, “Never Have I Ever.”

Kupperman, who was a “Quiz Kid” from age 6 until 16, was forever scarred by the experience and reluctant to discuss it. Michael Kupperman spent years researching his father’s experiences and in 2018 published a well-received graphic novel, “All the Answers.”

As a teenager, Kupperman appeared awkward and robotic on the TV version of the show. He enrolled at 16 at the University of Chicago, where he was bullied. A professor advised him to get out of the country. He found his niche at Cambridge University, and later at the University of Connecticut, where he remained until his retirement in 2010. He would walk away when people asked him about his experience as a “Quiz Kid,” and opened up to his son only in retirement.

“He wanted to retreat into the life of the mind, and in many ways he succeeded,” his wife told the Times. “He really lived in his head.”

The only time he raised his “Quiz Kid” experiences with his son was when he spontaneously volunteered that Abbot and Costello had once given him a dog. “That’s literally the only time he spontaneously shared a bit of showbiz remembrance, ever,” the younger Kupperman told The Guardian in 2018, the year he published his book about his father. “Never before or after, so it was a huge shock.”

In 2006, Kupperman published a popular book on philosophy called “Six Myths about the Good Life: Thinking About What Has Value.” In it, he strives to break through the strictures of facile expectations. In a review of the book, Samantha Vice singled out Kupperman’s hope to create a “philosophical therapy … loosening the hold of attractive and simple ideas that get in the way of our intelligence.”

It was an apt credo for a child who transitioned out of a stereotype into his own man.

In addition to his wife and son, Kupperman is survived by his daughter, Charlie; a sister, Harriet Moss; and a grandson