The COVID-19 pandemic has been buffeting American Jewry for months. What lies ahead? 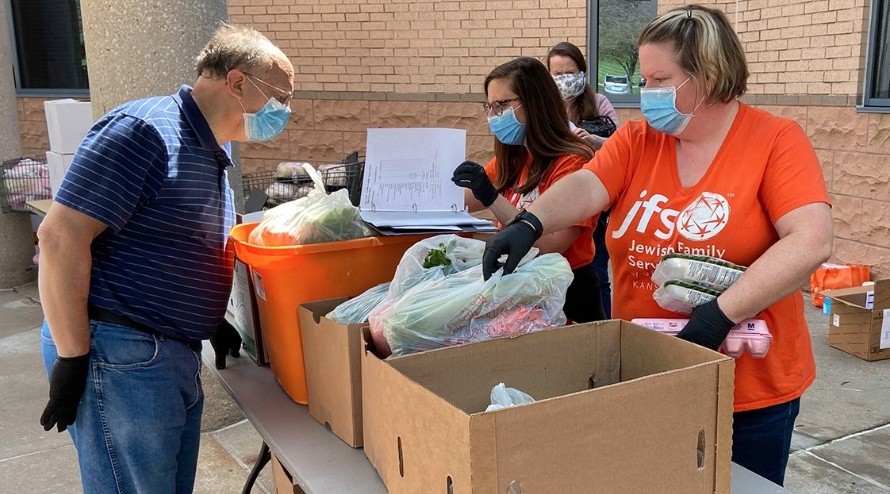 Food pantry volunteers work outside at the Jewish Federation of Kansas City amid the adoption of new pandemic-era health-and-safety protocols by Jewish institutions around the country. (Courtesy of JFGKC)
Advertisement

(JTA) — Hundreds of synagogues have been shuttered for months. Jewish organizations are slashing budgets and staff. Jewish community centers, saddled with empty gyms and child care centers, have laid off masses of employees.

Jewish camps closed this summer, many Jewish day schools are preparing for virtual sessions in the new term and kosher restaurants are going out of business.

Trips to Israel are suspended, Birthright is on hold until further notice and AIPAC, whose annual conference every March typically draws more 15,000 Israel supporters to Washington, D.C., canceled its 2021 conference.

This is what American Jewry looks like six months into a global pandemic that has killed nearly 200,000 Americans and set in motion an economic crisis of unknown scope whose impact likely will last for years.

With so much in flux and no end to the crisis in sight, what lies ahead for the world’s largest Jewish community?

“Jews are unusually adaptive and creative, and we surely will emerge from this crisis with new strengths and with our core values intact,” said Ira Sheskin, a demographer of American Jewry at the University of Miami. “While some individual institutions undoubtedly will not survive an economic crisis that seems likely to dwarf the 2008 recession, the basic building blocks of American Jewish life will weather this storm: the synagogues, educational institutions and organizations that are essential to American Jewry.”

For the most part, the pandemic and the economic downturn it’s causing are likely to accelerate existing trends rather than reverse them. They will speed up the adoption of online learning and prayer, hasten the demise of financially precarious Jewish businesses like restaurants and community newspapers, and further empower major Jewish philanthropists whose giving helps set the American Jewish agenda.

“American Judaism happens in America, which is a capitalist framework. Most of what’s going to change is going to be based on Darwinian and capitalist forces,” said Yehuda Kurtzer, president of the Shalom Hartman Institute of North America and a prominent figure in the community. “It’s basically going to be disruption across the board.”

The impact of the coronavirus pandemic is already far-reaching. Large American Jewish organizations like the Orthodox Union, the Jewish Federations of North America, UJA-Federation of New York, the Union for Reform Judaism and Hillel International all have announced staffing cuts of 12-25%. In May, the Joint Distribution Committee, or JDC, announced the layoffs of 53 employees and salary freezes through 2021. The empty entrance to the Oshman Family JCC in Palo Alto, which closed its facility in March due to the coronavirus pandemic. (Courtesy of OFJCC)

America’s largest-circulation Jewish newspaper, The New York Jewish Week, abruptly suspended its print edition in early July, its advertising and events revenue decimated by the pandemic. The same forces laid waste to the New Jersey Jewish News and prompted the Arizona Jewish Post also to go online only. Jewish publications across America are shrinking their print editions, laying off staff and reducing their publication frequency.

Abigael’s on Broadway, a prestigious kosher restaurant in Midtown Manhattan where for 25 years Jewish power brokers regularly brought mayors, Congress members and other high-powered clients, announced in May it will not reopen. It joined a growing list of kosher restaurants that have closed.

“Unfortunately, COVID 19 has taken a toll on the restaurant industry, too,” Abigael’s chef Jeff Nathan wrote in his announcement. “With all these lost months, it is no longer practical for us to continue with the grand plans we had.”

Jewish institutions sustained largely by participant fees, including schools, synagogues, camps and JCCs are at particular risk. With tens of millions of Americans out of work — not just service industry workers but also white-collar professionals like bankers and even doctors — many of these institutions will struggle to pay their bills.

“Though Camp has operated in a prudent and fiscally responsible manner for many years, tuition and fees make up over eighty-five percent of our revenue,” one Jewish summer camp in upstate New York, Ramah in the Berkshires, said in early July in a fundraising plea for $100,000. “Since March, we have implemented significant cost saving measures. Once the decision to cancel camp was made, we made additional budget cuts, including the elimination of several year-round positions as well as an across-the-board salary reduction for all remaining year-round staff members. Even with these significant budget cuts, our commitment to refunding tuition has left Ramah Berkshires in a precarious position.”

Museums, which rely on fees, facilities rentals and fundraising for revenue also are struggling.

“This crisis has forced us to make some very difficult decisions to ensure the museum’s survival,” said Jack Kliger, CEO of the Museum of Jewish Heritage in New York. Announcing layoffs in June of about 40% of his staff, he called the current situation an “existential crisis.” 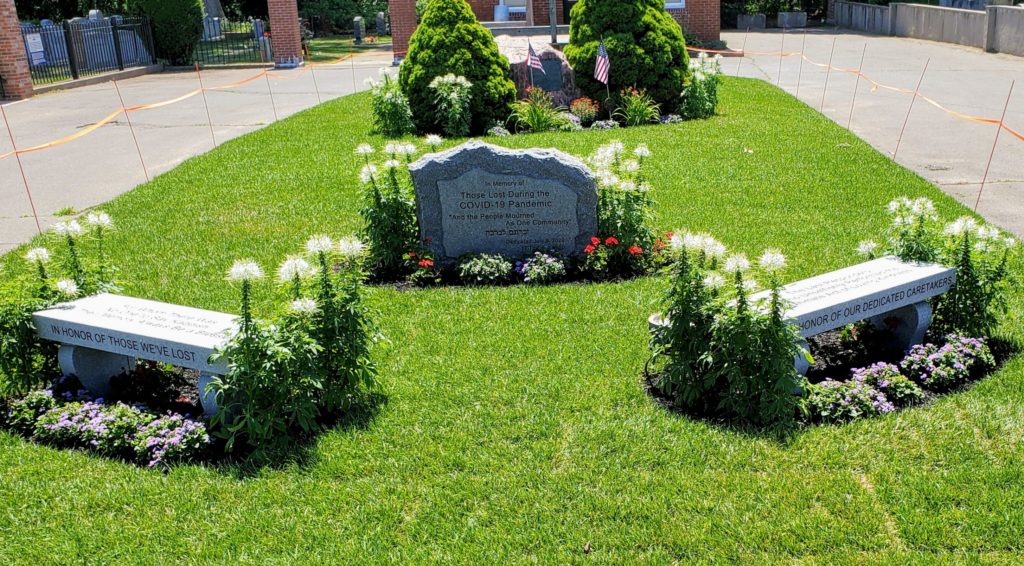 Boston’s Jewish community has unveiled a memorial to COVID-19 victims even as the pandemic continues. (Courtesy Jewish Cemetery Association of Massachusetts)

The National Museum of American Jewish History in Philadelphia, which opened to great fanfare in 2010, filed for bankruptcy on the eve of the pandemic and has since laid off or furloughed two-thirds of its staff.

Synagogues also are undergoing dramatic change. Some shuls are requiring worshippers to sign legal waivers before they attend in-person services. Synagogues have expanded their videostreaming offerings, including for classes and, in the cases of non-Orthodox synagogues, worship.

With shuls now online, worshippers no longer are limited just to the synagogues in their neighborhood; they can log on to one anywhere. While that may mean more competition for congregants, there’s also an upside: Synagogues that are physically distant can collaborate and pool resources to co-host services or programs like visiting scholars.

“Small congregations across multiple states can do it; the only challenge is time zones,” Asin said. “Geography doesn’t matter anymore because of the pandemic.”

The great challenge synagogues face is economic. Even before the coronavirus hit, some small were struggling. The cash crunch will intensify if synagogues see reduced income from members who cannot pay dues and a decline in High Holiday ticket revenue given the challenge of in-person services this year. If that happens, expect a growing number of synagogues to merge with others in their area or sell their buildings and move to rented space.

Union Temple is “not big enough, strong enough, or well-resourced enough as a congregation to do what we dream of doing on our own,” the leaders of one Reform congregation in Brooklyn wrote this spring in an announcement that they were in merger talks with another nearby synagogue, Congregation Beth Elohim.

The charitable foundations that support American Jewish life may be among the few to emerge stronger from this experience. As Jewish organizations struggle to raise enough money to support their core activities, the handful of large foundations that each dole out tens of millions of dollars per year to Jewish causes may end up holding even greater sway over the agenda of organized Jewish life. 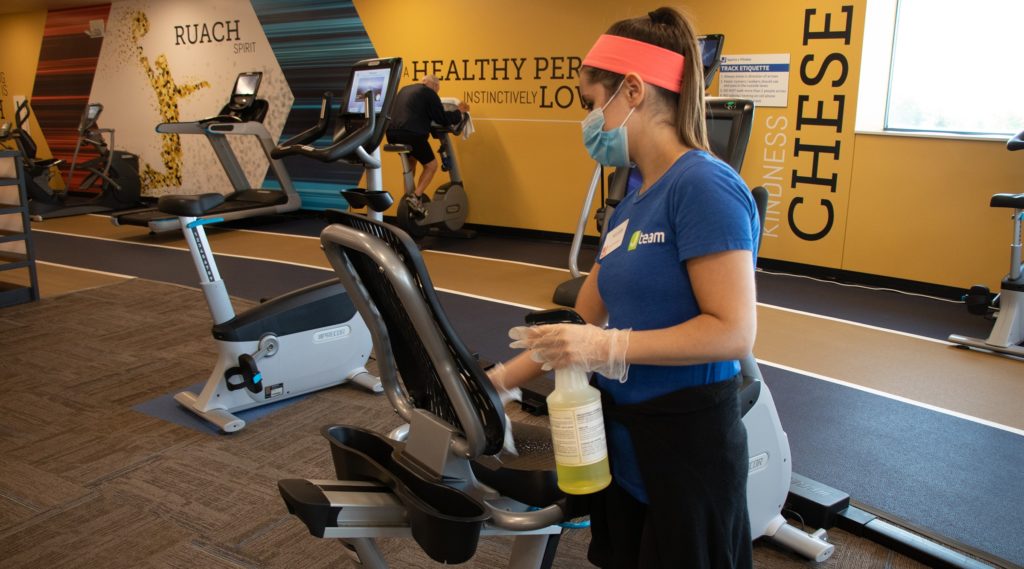 At the JCC in Overland Park, Kan., gym equipment is cleaned between uses to limit the possibility of coronavirus infection. (Courtesy of JFGKC)

Early on in the crisis, a few of the biggest foundations joined together to announce the creation of a $91 million Jewish Community Response and Impact Fund to provide emergency grants and interest-free loans to “maintain the infrastructure of Jewish life across the United States.”

Crucially, some 100 Jewish groups accessed at least $500 million in government-backed loans during the early months of the pandemic. But that money is already running out, and now many of the recipients of those funds are making drastic cuts.

Meanwhile, the coronavirus has made the mechanics of fundraising in America much more difficult: Fundraisers can’t travel to meet in person with donors, and the events and gala dinners that raise millions cannot be held. Given the difficult economic climate, grassroots fundraising is likely to be more challenging, too.

Of course, it’s not just institutions that are hurting; plenty of regular people and families are struggling. Between March and June, New York’s main Jewish charity, UJA-Federation of New York, allocated $2.65 million to provide food assistance, up from the $1 million it usually spends over the course of a calendar year. The extra money went to increase the stock at food pantries and send prepared meals to the homebound, isolated elderly and hospital workers.

The most devastating impact of the pandemic has been the loss of life to COVID-19. While it’s unclear exactly how many American Jews the coronavirus has killed, geographic data from the New York Health Department and anecdotal reports from Jewish burial societies, haredi Orthodox newspapers and funeral homes indicate that the number is substantial.

For now, American Jews are gearing up for an unprecedented High Holiday season, one where the majority of them may enter Zoom rooms rather than packed sanctuaries.

In the long term, said Hasia Diner, a professor of American Jewish history at New York University, it’s impossible to predict the impact of this crisis.

“We don’t know how long this is going to go on. In many senses that’s the worst thing that’s happening now,” Diner said. Nevertheless, she noted, “I tend to see crises as moments for creativity and growth rather than times to close up shop.”