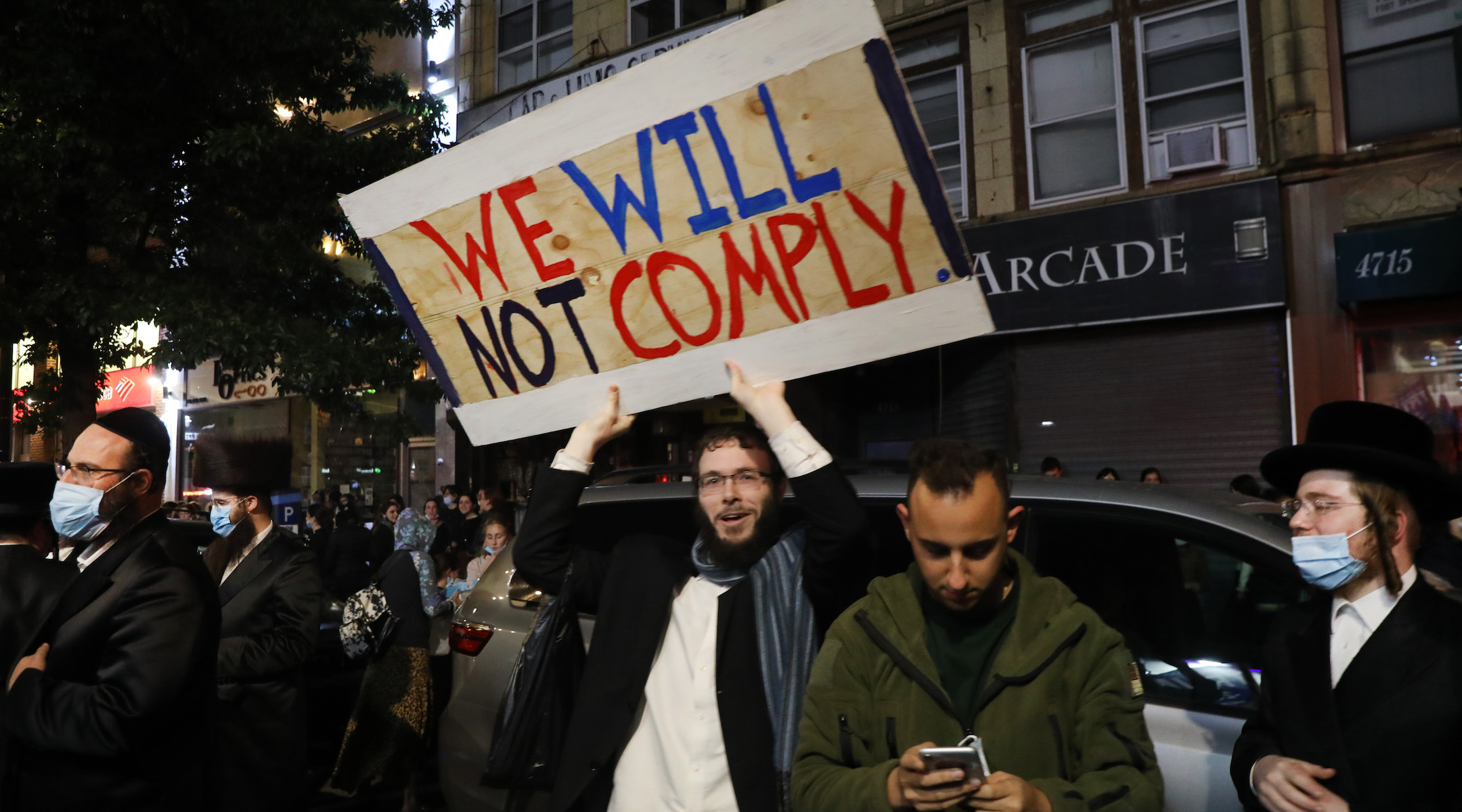 A man holds up a sign reading "We will not comply" during recent protests in Borough Park, Brooklyn, against public health restrictions, Oct. 7, 2020. (Spencer Platt/Getty Images)
Advertisement

(JTA) — When he looks at the protests rocking the Orthodox Brooklyn neighborhood of Borough Park, Matt Nosanchuk is conflicted.

He’s anxious that COVID-19 rates will continue to spike in the neighborhood, threatening to plunge the whole city into a second wave. He’s worried that the images and statistics out of the neighborhood will lead to a wave of anti-Semitism against the city’s most visible Jews. And he’s also angry at those Jews for, in his view, disregarding one of his religion’s most fundamental values.

“It makes me feel sad, it makes me feel angry, that fellow Jews in the name of Judaism would be taking positions that are so anathema to the core Jewish value of saving life,” said Nosanchuk, a former Jewish liaison for Barack Obama and the founder of the New York Jewish Agenda, a liberal advocacy group.

He added, “We have to be vigilant in how we defend and describe these measures so that we’re not feeding into anti-Semitic tropes and attitudes or dog whistles. There are ways to describe that the rules have to apply to all of us across the board.”

Nosanchuk’s group has organized an open letter, signed largely by non-Orthodox rabbis, in support of the recent public health restrictions on Borough Park. Earlier in the pandemic, the group organized another letter signed by a range of Jewish public figures excoriating Mayor Bill de Blasio for singling out the Jewish community for condemnation.

Now, as Borough Park experiences a second wave of the virus, and hundreds of Orthodox men gather in the streets for raucous protests, at times physically attacking their perceived opponents, New York Jews outside the neighborhood look on with a mix of horror, apprehension and concern. 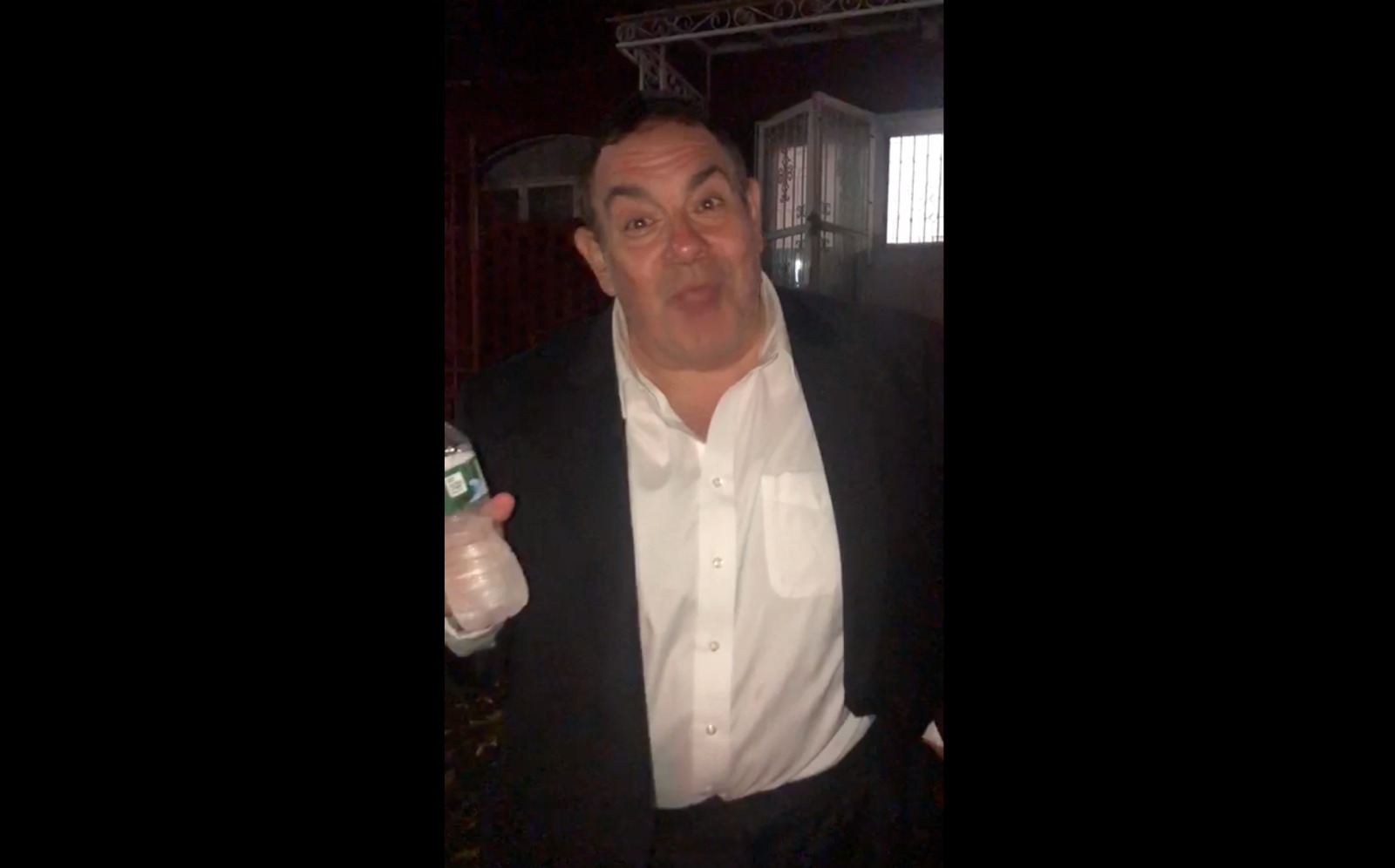 Heshy Tischler, leader of the Borough Park protests against new restrictions on synagogues and yeshivas, returned home after being charged with inciting a riot. (Screenshot from WhatsApp)

They know that Brooklyn’s Hasidic Jews, like all minority groups, are not uniform — many are observing public health guidelines even as a vocal faction opposes them. They fear that some of them will fall victim to hate crimes. And they feel shame and embarrassment that a group of the city’s most readily identifiable Jews are acting in contravention to the rules that most New Yorkers are at least trying to follow. That includes haredi, or ultra-Orthodox, Jews.

“Many, many members of haredi communities everywhere believe that it’s totally irresponsible,” said Shani Bechhofer, a haredi educator in Rockland County, New York, which also has a large Orthodox population and is experiencing a spike in infections. “There is widespread embarrassment. I feel very sad that so many people believe irrational, dangerous notions, and I don’t know where the messaging comes from.”

Of course, Bechhofer said, she knows the source of some of the opposition to the restrictions: support for Heshy Tischler, a local demagogue who has disparaged social distancing guidelines. She worries that Tischler’s rabble-rousing will not only spread the virus but also lead to a wave of anti-Semitic attacks.

“I’m afraid that people are tragically going to get themselves and others sick,” she said. “And I’m also very concerned about an anti-Semitic backlash against this public high-risk behavior. I don’t understand what makes people like this Tischler guy think that he has the right to endanger everybody for his moment of fame or whatever it is. It’s a damaging narrative and it’s inherently wrong.”

Jewish New Yorkers noted that support for Donald Trump was one of several factors contributing to low levels of mask-wearing and compliance with the restrictions. Because the virus hit the haredi community hard earlier in the year, some Orthodox Jews believe — without scientific justification — their communities have herd immunity. In addition, in a community with deep respect for religious leaders, not all prominent rabbis have pushed mask-wearing.

Reports of haredi Jews being accosted in Brooklyn have circulated on social media in recent days. Last week, an Orthodox man was assaulted on the Coney Island boardwalk. This week, there were two more reports of Orthodox Jews being verbally harassed. A recent video that made the rounds on social media appears to show an Orthodox man speaking on a cellphone without a mask, far from other people, when someone yells at him, “Put your f***ing mask on! Put your mask on! There’s COVID cases, hurry up, put it on!” 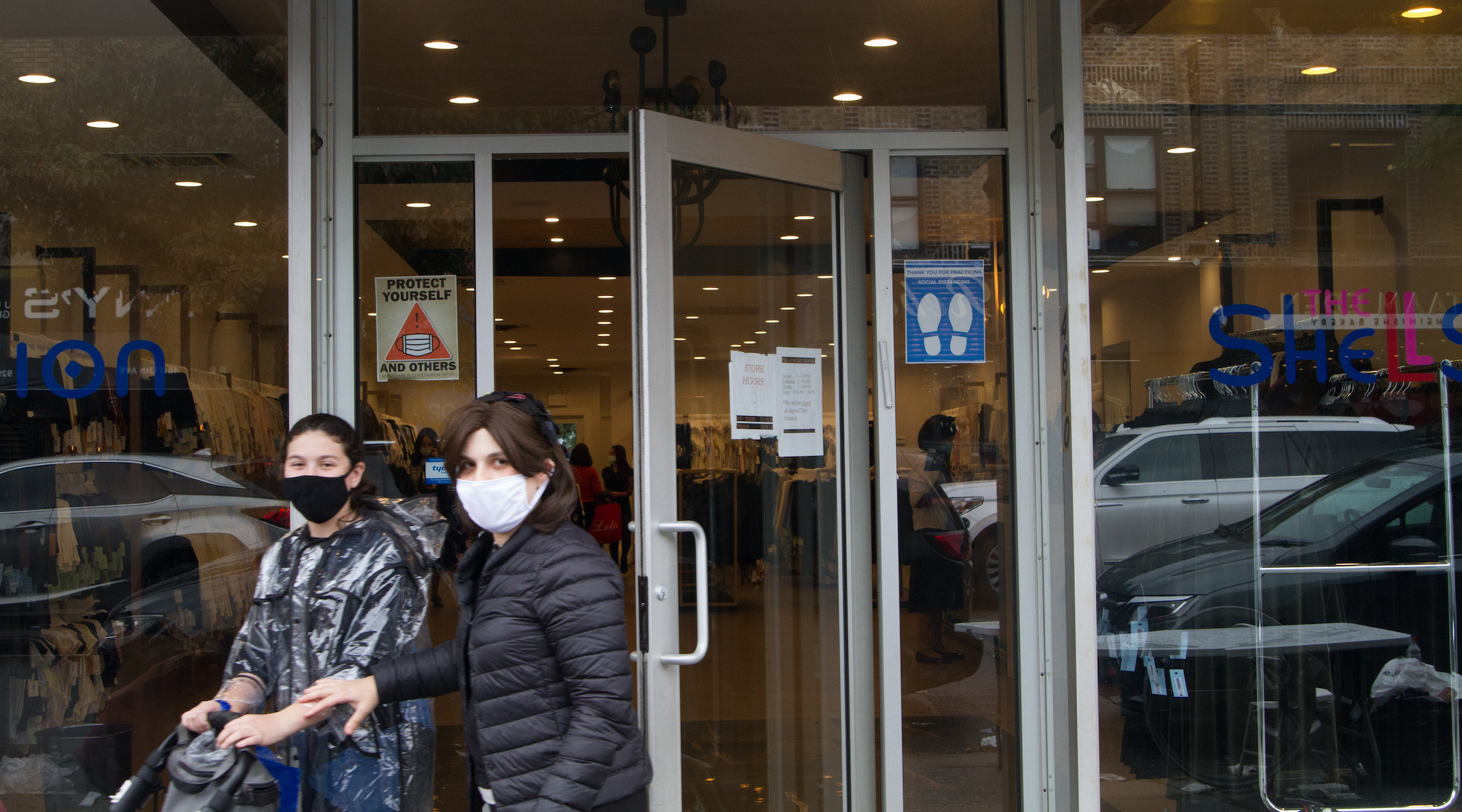 For some, the incidents bring back painful memories of the wave of attacks on Orthodox Jews in Brooklyn and greater New York City last year, which included two lethal anti-Semitic attacks in Jersey City and Monsey, New York.

An NYPD spokesperson told the Jewish Telegraphic Agency Wednesday that, year to date, 2020 has seen half as many anti-Semitic attacks as the same period of 2019, though that includes a period of several months when people were hardly going outside, making anti-Semitic street harassment less likely. Local Jewish activists are worried that, now that people are outside and animosity is rising against Orthodox Jews, the attacks will resume.

Rabbi Jill Jacobs, who lives in Manhattan and signed the letter organized by Nosanchuk in support of the recent public health measures, called the neighborhood’s recent protests a “hillul Hashem,” or desecration of God’s name, a term that denotes public behavior by Jews that reflects poorly on all Jews. She says she’s already seen messages on her neighborhood Facebook groups that recall age-old stereotypes about Jews spreading disease.

“Images of Jews attacking other Jews and protesting public health, at a gut level, it’s just embarrassing,” said Jacobs, the executive director of T’ruah, a liberal rabbinic human rights organization. “There’s a fear that anybody who has any anti-Semitic inclinations is going to look at that and make all sorts of assumptions about Jews. This is especially terrifying in a context in which haredi Jews have been attacked on the street on a fairly regular basis.”

Jacobs as well as others said that the key in discussing the Borough Park protests was not to generalize the protesters’ conduct to implicate all haredi Jews. Steven Auerbach, a Jewish epidemiologist who recently worked for the city helping hospitals manage the COVID-19 crisis, said there are plenty of communities across the country where people are behaving similarly to residents of Borough Park.

“No community is monolithic,” he said. “We should never talk about ‘the haredi community’ or ‘the Orthodox community’ or ‘the Hasidic community.’ It’s always made up of individuals and there is always some diversity of opinion in any community. We’ve seen it with pro-mask people from within the community being attacked. Even in the most Republican districts, there’s usually a third of people who vote Democratic. Same here. There are always individuals with a different opinion.”

That’s why, when Auerbach looks at the scenes in Borough Park, he does not view it in Jewish terms. To him, it’s one of several densely populated communities that suffered high death rates early in the pandemic and, like many such communities in the United States, now has a vocal group rebelling against the rules.

“I do not view this as, ‘Oh, those ultra-Orthodox crazies,'” he said. “Even at the gut level I don’t. As a public health doctor, I see it as the same thing as what’s going on in many communities, with too many people — not everybody — listening to false information.”