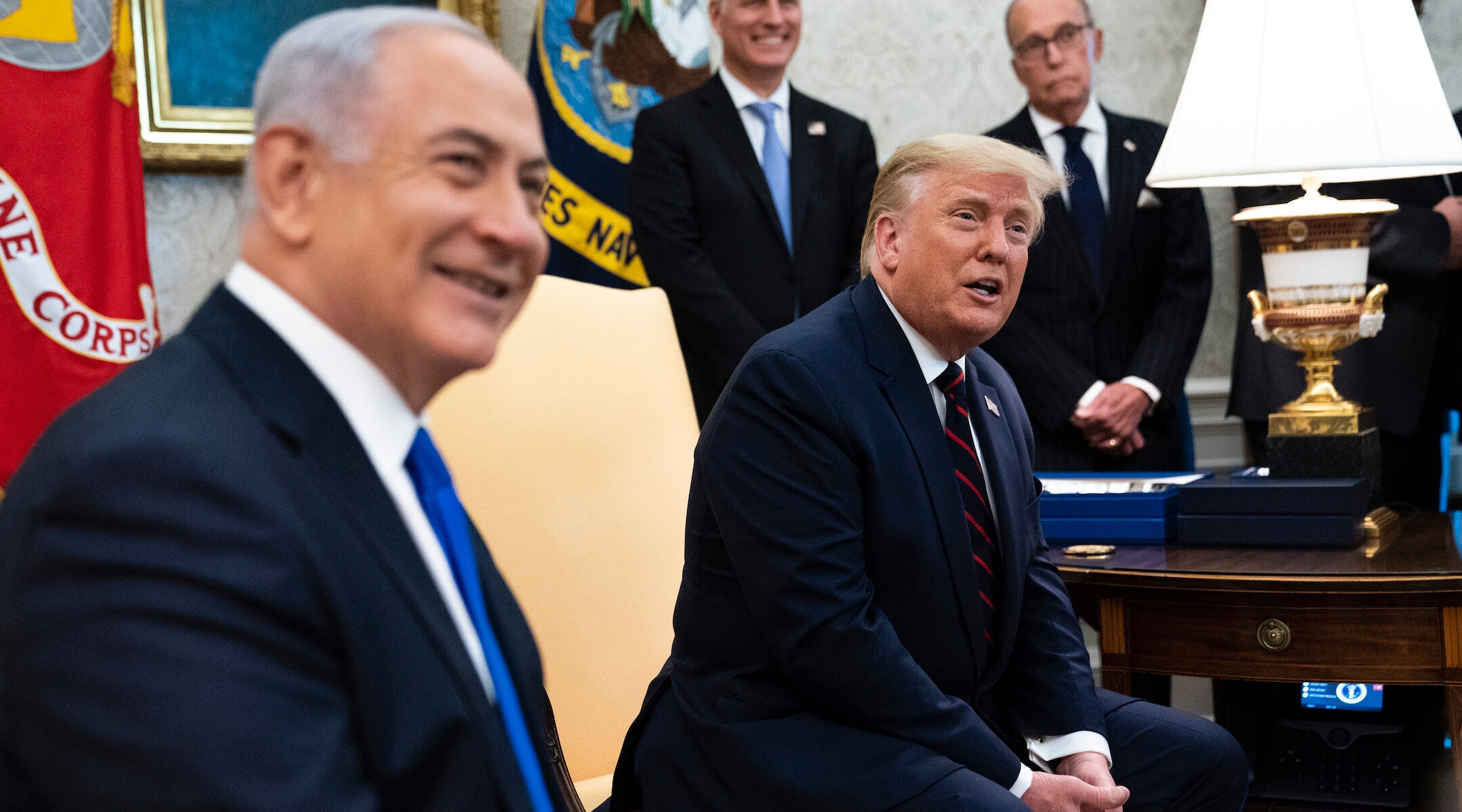 (JTA) — Most Jews disapprove of President Donald Trump and plan to vote against him. But for a segment of American Jewry, Trump has granted a growing list of long-held wishes.

“If your worldview is such that these things are unbelievable accomplishments and things that you’ve waited your whole life to see happen, this president is a dream come true,” Richard Goldberg, a former Trump administration official, told the Jewish Telegraphic Agency earlier this year.

Goldberg was referring to Trump’s actions on Israel. Surveys show that most American Jews vote based on the same issues that animate Americans in general, like the economy and healthcare. A portion of American Jews, particularly those who favor a more dovish attitude on Israel and the Palestinians, disapprove of Trump’s posture toward the conflict, out of concern that it has further eroded the chances for a two-state solution. There are also those who worry that he has unraveled the Iran deal without a clear plan for putting something better in place to stop Tehran’s pursuit of nuclear weapons.

But for American Jews who prioritize unbridled support for the Israeli government’s concerns when they fill in their ballot, Trump has built up a near-spotless record.

The president has trumpeted that record in speeches to Jewish audiences, and his Jewish advocates have also made it the centerpiece of their case for Trump’s reelection. In June, the Republican Jewish Coalition released a nearly 8-minute video called “Sunrise” praising Trump’s record on Israel and contrasting it with U.S.-Israel relations under President Barack Obama, who had a famously acrimonious relationship with Israeli Prime Minister Benjamin Netanyahu. Netanyahu and Trump are very close, and a recent poll showed that Israelis favor Trump’s reelection by a large margin as well.

Here’s a mostly chronological rundown of Trump’s record on key Israel-related issues, culminating with the recent spree of normalization moves with Arab states.

Israeli sovereignty over Jerusalem and the Golan Heights

Following unfulfilled promises by previous presidents to move the United States embassy to Jerusalem, Trump made the move and recognized Jerusalem as Israel’s capital.

Under U.S. President Bill Clinton, Congress passed the Jerusalem Embassy Act recognizing Jerusalem as Israel’s capital and stating that the embassy should be moved here. However, presidents ever since — from Clinton to George W. Bush to Obama — have invoked a waiver written into the law that allows them to postpone the move for reasons of “national security.” (As candidates, both Clinton and Bush promised to move the embassy.)

In contrast, in December 2017, before finishing his first year in office, Trump signed a proclamation at the White House saying the United States sees Jerusalem as Israel’s capital and directing the State Department to start planning an embassy in the city. “While previous presidents have made this a major campaign promise, they failed to deliver,” Trump said at the time. “Today, I am delivering.” (This summer, he told an audience that he made the move to please his Evangelical Christian supporters.)

Jerusalem’s status as Israel’s capital is a consensus issue among Israeli Jews who otherwise disagree vehemently about how Israel should approach its conflict with the Palestinians. The city and its holy sites, including the Western Wall and Temple Mount, carry immense symbolism for most Israeli Jews. A Brookings Institute poll about the embassy move in 2018 found that 93% of Israeli Jews supported it.

Fast forward to March 2019, just two weeks before a tight Israeli election, Trump took a similar step by signing a proclamation that made the United States the first country to recognize Israel’s sovereignty over the Golan Heights, the strategic plateau it captured from Syria in 1967 and annexed in 1981.

In 2018, Trump fulfilled another campaign promise — to pull the United States out of the Iran nuclear agreement reached by the Obama administration.

The deal — which Trump frequently lambastes as the “worst deal ever” — swapped sanctions relief for a rollback of Iran’s nuclear program. Trump had said he might stay in the deal if it could be renegotiated to remove “sunset” clauses that allow Iran to resume some enrichment of fissile material within a decade. He also wanted a tougher inspections regime and to include a missile testing ban into the deal.

“It is clear to me that we cannot prevent an Iranian nuclear bomb under the decaying and rotten structure of the current agreement,” Trump said. “The Iran deal is defective at its core.”

In pulling out, Trump bucked a full court press by three European nations also party to the 2015 dealt. French President Emmanuel Macron, German Chancellor Angela Merkel and then-British Foreign Secretary Boris Johnson all visited Washington in what proved to be failed efforts to persuade Trump to stay in the deal.

Since withdrawing from the deal, the Trump administration has repeatedly placed sanctions on Iran in an attempt to pressure the country to abandon its nuclear program as well as its support of regional militant groups. At the beginning of this year, Trump ordered the killing of Qassem Soleimani, a senior Iranian general whose Quds Force helped direct militias across the Middle East, including in his alliances with Hamas and Hezbollah, which have fought with Israel for decades.

In 2019, Trump signed an executive order protecting Jewish university students, as a class, from discrimination. The order protected Jewish students who face discrimination based on a perceived shared “race, color, or national origin.” The order endorsed the International Holocaust Remembrance Alliance working definition of anti-Semitism, which includes certain types of harsh criticism of Israel.

While the executive order was not limited to Israel criticism, it was seen partly as a way to combat hostility to the Jewish state on campuses (and, to its objectors, to silence legitimate criticism and discussion as well). After it was signed, officials began asking the Justice Department to investigate campuses for anti-Semitism due to anti-Israel activity.

Trump has taken other actions that specifically deprive Palestinian programs and governmental institutions of funding and resources. In 2017, the administration closed the Palestine Liberation Organization office in Washington and closed its own diplomatic mission to the Palestinians in Jerusalem in 2019, folding that office’s functions into the new Jerusalem embassy.

In 2018, the administration reduced or eliminated a range of ways in which it gave financial assistance to Palestinians. It stopped giving funding to UNRWA, the oft-criticized United Nations agency that handles Palestinian refugees, and cut an additional $200 million from foreign aid to Palestinians. The government also eliminated $10 million in funding for Israeli-Palestinian coexistence programs.

Like previous Trump actions, the plan was seen as a boon for Israel’s right-wing government. It did not require the dismantling of any Israeli settlements in the West Bank and envisioned full Israeli security control over the entire territory, meaning that the Israeli Defense Forces would still have the ability to come and go from Palestinian areas as they pleased. The Palestinian state it envisioned was a patchwork of areas comprising some 80% of the West Bank, and it was rejected out of hand by Palestinian leadership.

The announcement of the plan, at a news conference with Netanyahu, came a couple months after the Trump administration said it would no longer view Israeli West Bank settlements as illegal. In the wake of the plan’s release, Netanyahu said that he will annex portions of the West Bank to Israel, but has delayed doing so, saying he would prefer to wait for a green light from the U.S..

Normalization with the Arab world

For decades the conventional wisdom, including among most U.S. officials, had been that Israel would need to reach a two-state agreement with the Palestinians before inking peace deals with the rest of the Arab world.

But Trump has overseen a shift to an outside-in approach, with the Palestinian track taking a back seat: The recent normalization agreements between Israel, the United Arab Emirates, Bahrain and Sudan, brokered by the Trump administration, mark a historic step for Israel in the region.

For years, Arab states had engaged in behind-the-scenes cooperation with Israel in order to coordinate on intelligence and head off Iran’s increasingly aggressive moves. The agreements inked between the United Arab Emirates, Bahrain and Israel in September brought those relationships into the open and will allow the countries to trade, and for their citizens to visit each other.

In his phone call with Netanyahu on the Sudan agreement, Trump snuck in a shot at his opponent, Joe Biden.

“Do you think ‘sleepy Joe’ could have made this deal, Bibi?” the president said. “Somehow I don’t think so.”

“We appreciate the help for peace from anyone in America, and we appreciate what you’ve done enormously,” the prime minister replied.