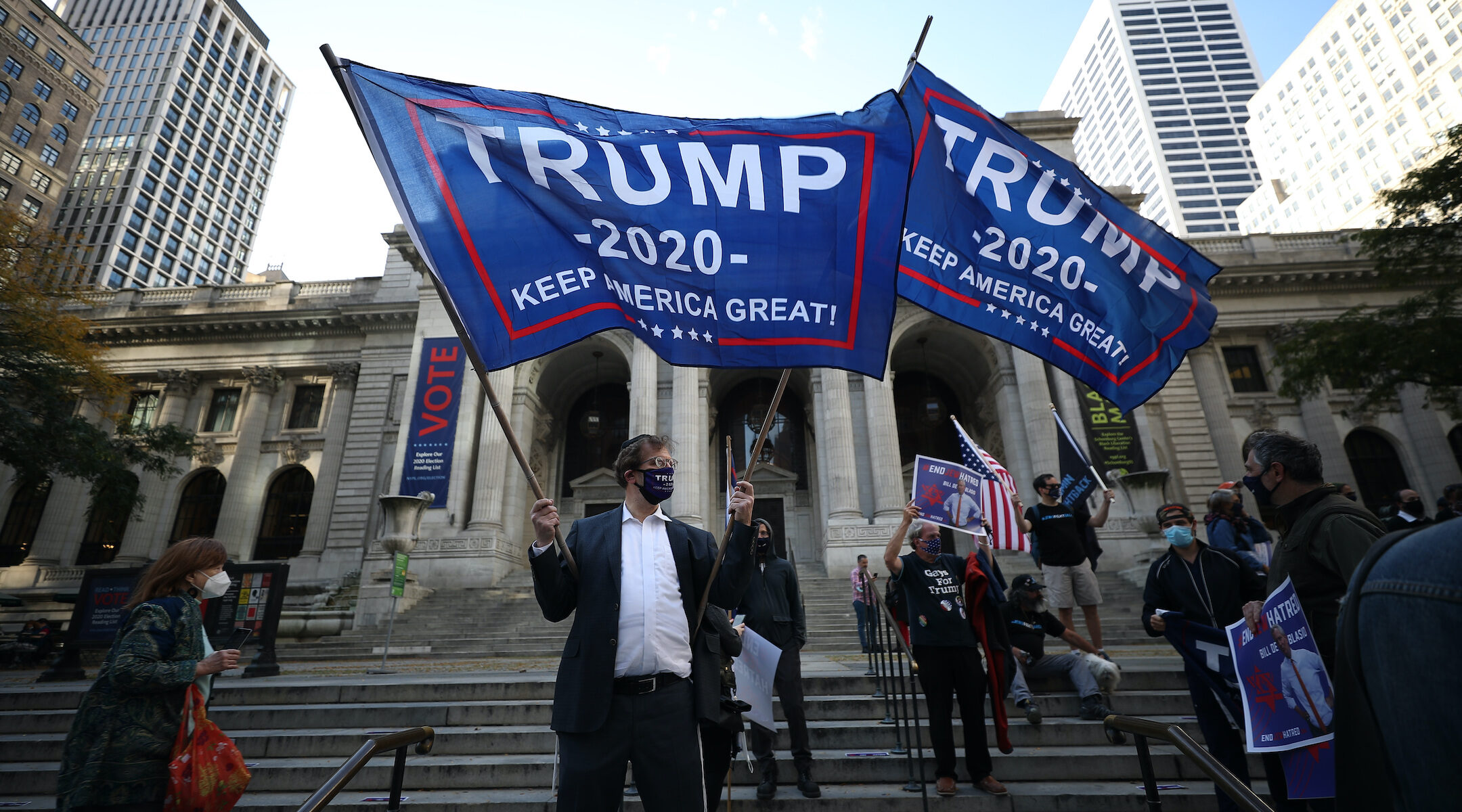 (JTA) — Rayne Lunger had known for some time that many in her community supported Donald Trump for president. But it was just in the last few weeks when “Trump 2020” and “Blue Lives Matter” flags were hung from street lamps on a main avenue in her community in Borough Park that it became crystal clear.

“The dominant narrative is that Trump is the greatest president in American history and Jews never had a greater ally in the White House,” Lunger said.

Lunger isn’t a fan of the president. But in the Orthodox community, she’s in the minority. The majority of Orthodox Jews are expected to vote to give him a second term.

And in contrast with 2016, when Trump garnered a slight majority of the Orthodox vote but less open enthusiasm for his candidacy, Orthodox rabbis have endorsed Trump and his Orthodox supporters have rallied in support of him.

“A big part of the increase in enthusiasm is how President Trump…went from an unknown commodity to a known commodity,” said Eli Steinberg, an Orthodox writer and consultant in Lakewood, New Jersey. “He definitely has a stronger, more robust base of support in the community now.” Steinberg is among that increased base of support, having gone from writing in “anybody else” in the 2016 election to supporting Trump in this year’s election.

This summer, a haredi Orthodox rabbi endorsed Trump, saying the president had “done a good job.” A well-known Orthodox pop singer rewrote one of his hit songs in the president’s honor and performed it at a Jewish summer camp. And 13 leading Orthodox rabbis thanked the president for his executive order declaring religious services “essential” in a letter that was released last week in what looked like an endorsement in the presidential race. “Thank you Rabbis!” the president tweeted in response.

Over the past two Sundays, Orthodox Jews have organized rallies in support of Trump with supporters joining in from Orthodox communities across the New York City area.

And in recent days, new endorsements of the president have come out of a number of Hasidic communities.

In New Square, a town in upstate New York that is home to a large community of Skverer Hasidim, the village board endorsed Trump in fliers posted around the town, according to a tweet from Jake Turx, a reporter for Ami Magazine. The flier encouraged everyone in the town, which voted overwhelmingly for Hillary Clinton in 2016, to vote for Trump.

For some Orthodox Jews supporting Trump, Israel is an important selling point for the president. In addition to moving the U.S. embassy in Israel to Jerusalem and recognizing the Golan Heights as Israeli territory, in the last several months, Trump has brokered multiple agreements between Israel and Arab countries.

But for many Orthodox Jews, support for Trump doesn’t come down to Israel alone.

Vos Iz Neias, a popular source of online news in Hasidic communities, endorsed Trump Sunday in an editorial that accused Biden of being a socialist and of general senility. The endorsement also noted Trump’s actions on Israel and his support for school vouchers, which Orthodox organizations have long advocated for because they would allow families to use public funds to pay yeshiva tuition.

“For Jews, Americans and Jewish-Americans, the choice couldn’t be more clear. We can look forward to four more years of strength, progress and realization of our nation’s greatness…or to relinquishing the gains we have enjoyed under the leadership of President Trump,” Vos Iz Neias wrote.

A Twitter account called Satmar HQ, which frequently tweets announcements and statements from a faction of the Satmar Hasidic community, posted a set of fliers endorsing Trump on behalf of the Satmar community in Kiryas Joel in upstate New York. The fliers specifically named prison reform as something for which the community had to show its gratitude to the president and noted that there was no minyan in Otisville, a prison known for accommodating Orthodox Jewish observance, on the holiday of Sukkot this year, apparently because so many Jews who were imprisoned there had been released.

For some in the community, the release of Sholom Rubashkin, a Hasidic meatpacking plant executive who was convicted of financial fraud in 2009 and sentenced to 27 years in prison, was a turning point. In December 2017, Trump commuted his sentence, leading to celebrations in some Hasidic communities, where the mitzvah of pidyon shvuyim, redeeming prisoners, is an important value.

“For a lot of people, the Rubashkin thing was a big issue,” Steinberg said. “All these have this common thread that runs through them, that he positioned himself as a friend of the Orthodox community. The things that people care about, he’s made priorities.”

For Steinberg, the primary issue driving him to embrace the president was religious liberty.

Particularly during the pandemic, he said, as synagogues in New York were subject to rules that were, at times, stricter than other gathering places like restaurants, Steinberg said it became even clearer that he aligned with the president’s understanding of religious liberty.

“It clarified where the parties assigned value to religious worship,” Steinberg said, noting an executive order Trump signed in May declaring houses of worship “essential,” and ordering governors to allow houses of worship to reopen.

“It meant a lot when he said that houses of worship are considered essential,” he said.

He also noted the way that Democrats responded to incidents of anti-Semitism as a factor driving Orthodox Jews towards the Republican party. He pointed to a bill passed by the House in May 2019 which denounced anti-Semitism along with a number of other forms of bigotry. The bill was originally written in response to comments made by Rep. Ilhan Omar that were considered by many to be anti-Semitic. Set against the backdrop of increased anti-Semitic incidents in New York City and surrounding communities in previous months, particularly targeting visibly Orthodox Jews, the handling of that bill upset Steinberg.

“That radicalized me,” he said.

Of course, with most Orthodox Jews living in states with large Democratic majorities, it’s unlikely that the Orthodox vote will impact Trump’s chances. But the fierceness of support for Trump in Orthodox communities has had an impact on the communities themselves and left Biden supporters feeling marginalized.

Then, she said, “A lot of people didn’t vote, a lot of people they’d vote, but there wasn’t a lot of investment the way there is now with people being so passionate about it.

Lunger started tweeting with the hashtag #yidenforbiden last week in a bid to show that Orthodox Jews who supported Biden were not alone.

Hundreds liked her tweet and dozens retweeted it or shared their own reasons for supporting Biden, using the hashtag. The tweets made clear that Trump’s hold on the community is not as all-encompassing as it may seem from the Trump flags in the street and the eye-catching rallies organized by his Orthodox supporters in New York City Sunday.

“There is much enthusiasm for the president among haredim, if only out of concern for what a Democratic administration may do on the religious rights front, and out of gratitude to Mr. Trump for his actions vis a vis Israel and the Middle East,” Rabbi Avi Shafran, a spokesperson for the haredi Orthodox umbrella organization Agudath Israel, said in an email. “There is also, though, I should add, a quiet minority of haredim who are not enamored of the president and favor Mr. Biden.”