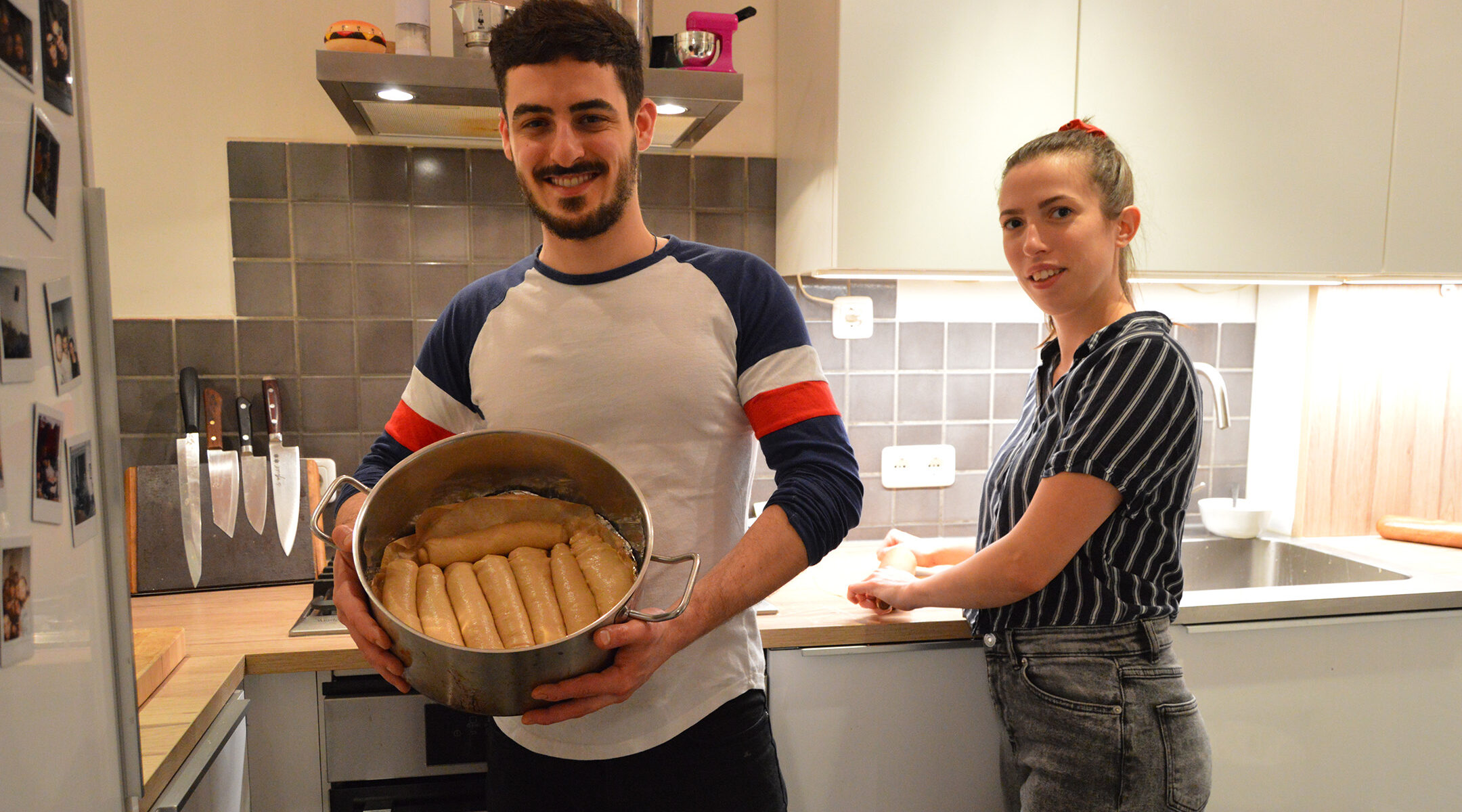 AMSTERDAM (JTA) — After Gal Graber and Tal Goldman had a disappointing experience with a store-bought jachnun, the two Israelis living in Amsterdam set out to make the slow-cooked Yemenite bread on their own.

“As with many Israelis, jachnun is connected in our minds with Saturday mornings, with quality time,” Graber told the Jewish Telegraphic Agency. “But the frozen ones for sale here are not great. So we decided to make our own.”

It turned out to be a prescient undertaking. Earlier this year, the restaurant where Graber was working — & moshik, which had two Michelin stars thanks to its Israeli chef Moshik Roth — shut down during the Netherlands’ first coronavirus lockdown. Like restaurant workers around the world, Graber and his French girlfriend, Mathilde Lair, who was head pastry chef at & moshik’s, both lost their jobs.

Now, Graber, Goldman and Lair spend their days baking and delivering the buttery rolled bread that is a standby of Yemenite families’ Shabbat lunch tables, and delivering it by scooter throughout Amsterdam.

Neither partner is Yemenite. But what they lack in cultural authenticity they make up for their experience as chefs and desire to make neatly folded rolls that they say are aesthetically superior to coarser cakes and, of course, tastier than the frozen jachnun available in Amsterdam’s kosher supermarkets.

“How many jachnuns do you know, in Europe or anywhere, that are made by chefs from a 2-star Michelin restaurant?” Garber said. 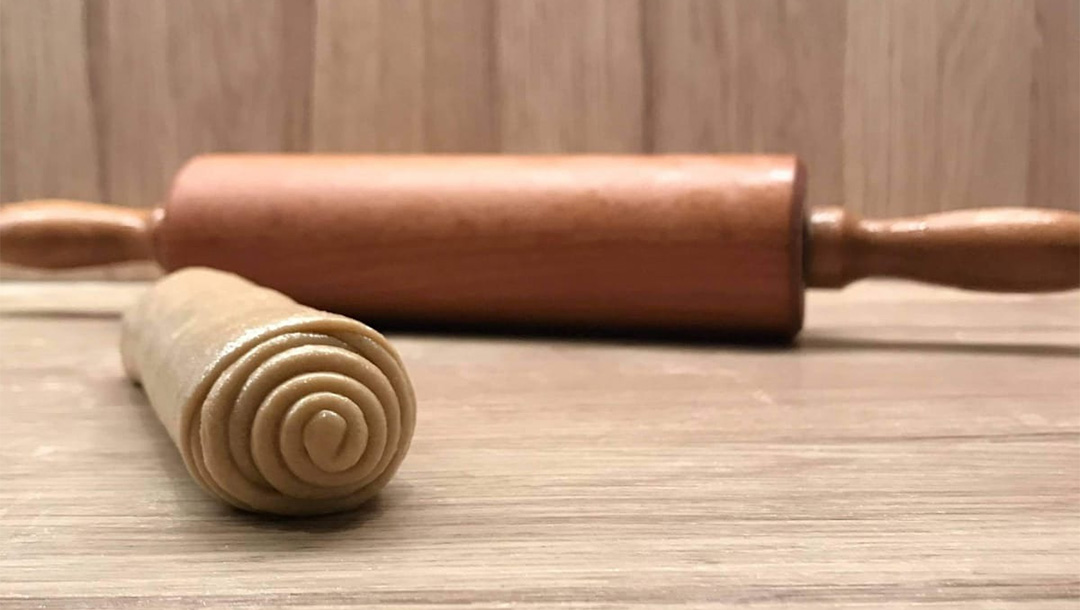 Jachnun needs to be baked in the oven for about 12 hours. (Courtesy of Gal Garber)

There aren’t many — but thanks to other enterprising Israelis, Europeans across the continent are getting an introduction to jachnun during the pandemic. Across the globe, home bakers have found themselves suddenly able to compete with restaurants that are now closed to diners. From London to Munich, jachnun businesses have popped up to capitalize on a dish that’s exotic, comforting and — perhaps most significantly for the moment — takeout-friendly.

Unlike hummus, which Israelis have had a big role in injecting into the increasingly vegetarian culinary mainstream of Europe and North America, jachnun can stay for days in the fridge without going bad. And unlike falafel, another food that Israelis have had a key role in mainstreaming, it does not become soggy if it is not consumed right away.

Cooked for many hours and typically served with hard-boiled eggs, jachnun comes with a crushed tomato and zhug, a coriander pesto that’s so spicy that even Israelis tend to apply it sparingly.

In London, Zak and Yifat Braham are selling mostly to Israelis for whom, Yifat said, “jachnun is part of a tradition, a slice of home. … I think what I’m actually selling are memories, not food.”

Yifat learned to make jachnun in her native Karmiel, a city in Israel’s north, from her mother and aunt, who have Yemenite roots. She was recovering from major surgery that prevented her from working in her job as a teacher when the pandemic began, so when her husband’s income as a cab driver evaporated almost overnight, the family feared a crisis.

“We were heading toward a fall, we couldn’t afford to pay the bills,” she said. The pair began producing jachnun in their home and delivering it to customers throughout London.

Through the Israeli customers, “others are also getting to know the food,” said Yifat, who each week prepares dozens and sometimes hundreds of rolls. “Italians tend to like it for some reason.”

Demand is so high that Zak’s cab isn’t enough to make the rounds anymore. The Brahams had to hire a second delivery man.

“It’s not very lucrative, but it’s generating an income. It’s saved us,” Yifat Braham said. “We were lost before we got into jachnun.”

The Brahams have competition in Jonathan Gan, a 42-year-old high-tech innovator who immigrated from Israel to the United Kingdom in 2014. He fell back on jachnun last spring, when the country went into a lockdown that spelled disaster for his marketing software at a time when business owners were cutting costs just to stay afloat. 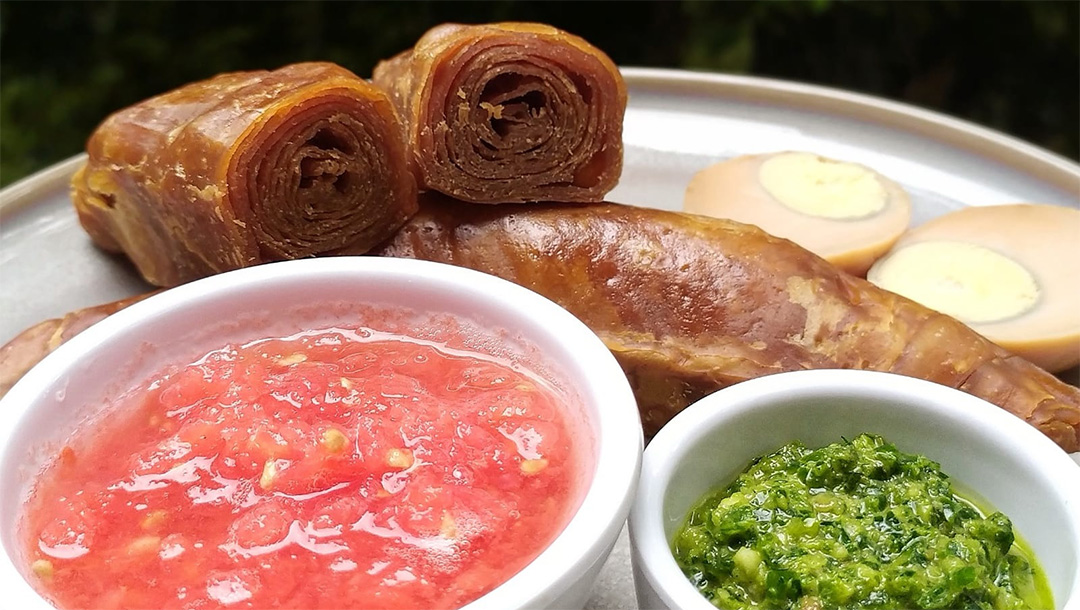 Served with crushed tomato and zhug, a spicy corriander pesto, jachnun is a weekend delicacy for Yemenite Jews. (Courtesy of Gal Garber)

“I reached for grandmother Yonah’s jachnun recipes and granddad Zion’s zhug recipes and started rolling,” Gan said in an article about his coronavirus transformation for Alondon, a Hebrew-language magazine.

Gan has applied his startup skillset to his new business, Jachnun Stories.

“There’s a fundamental difference between making 10 portions to making 100, and it’s not only about multiplying materials by a factor of 10,” he told Alondon. As demand rose, “I was racing to catch up with it, learning as I went along how to make bulk while setting up a chain of supply, optimizing preparation, establishing a digital presence” and other aspects.

His kitchen in London looks like a physics classroom. “The walls are full of charts, formulas and calculations, flow charts and work protocols,” he said. His business owes as much to his Yemenite grandparents as it does to his Ashkenazi grandmother who put him through his studies to become an engineer, he added.

Ya’arit Stark, a stay-at home mom of two, began selling jachnun earlier this year in her apartment near Munich, where only a few hundred Israelis live.

Her husband, Eran, who works in the tech sector, delivers the dishes across the Munich region by public transportation, she told the Jewish Telegraphic Agency in a video interview that she gave while preparing a batch.

Repeating the process that her 95-year-old grandmother, whose name is also Yonah, taught her, she sprays the working surface with fat and stretches the dough until it’s the size of an average oven tray. She stops stretching when holes start to form in the nearly transparent sheet.

“You need those holes, they’ll provide some airiness,” she said as she quickly folded the sheet inward over itself and placed the wrap in a Wonder Pot, an device possibly invented in Israel that is essentially a ring-shaped receptacle made of aluminium that’s especially useful for slow cooking. She fills the pot with jachnuns, spraying each unit with oil to keep them from sticking to one another. 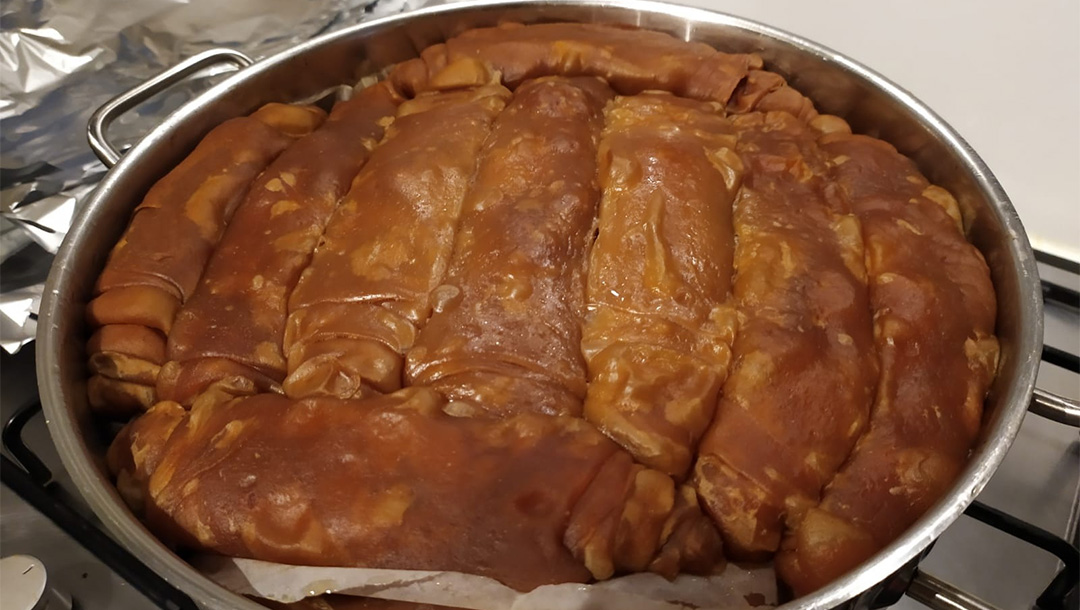 With fewer Israelis to buy jachnun, the Starks have had to make inroads with the other locals, whom she says “like Middle Eastern food but have a pretty limited selection of it, mostly made up shawarma.”

A taste for novelty was what brought Max Breinbauer, a 26-year-old law student, to jachnun, which he had heard about during his Hebrew-language course. “I wanted something new and it was definitely that. Satisfying, spicy and very simple,” said Breinbauer, who is not Jewish and one of the Starks’ regulars.

While the future for pandemic pop-ups is uncertain, Gan, in London, said business is going well for now.

“Turns out you can invent an innovative technology, raise millions, start a firm and international operation from scratch, employ dozens of employees, win international competitions, and then hit the jackpot with some flour and water,” Gan wrote on Facebook. “We’re making lemonade out of corona.” 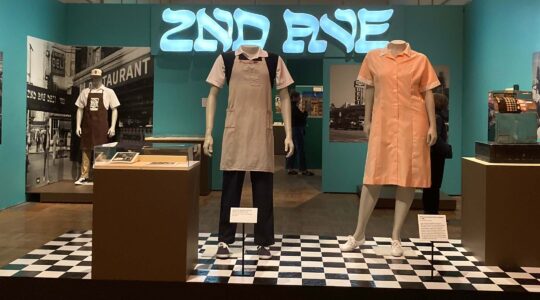