A year of loss: Orthodox Jewry reels as rabbis die during COVID-19 pandemic 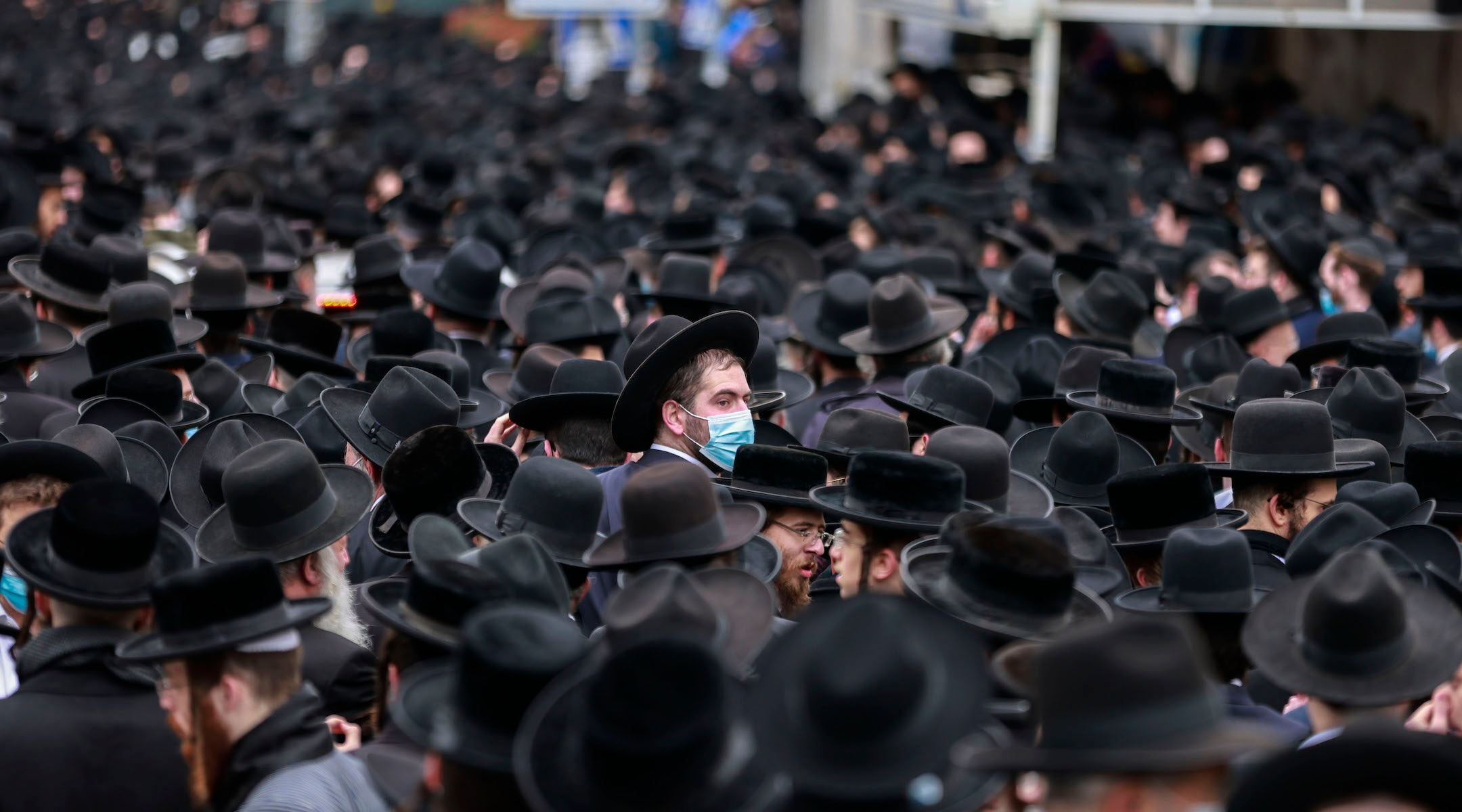 (JTA) — Three times on Sunday, Orthodox men carried the body of a beloved Torah scholar wrapped in a black and white prayer shawl through the streets of Jerusalem to a freshly dug grave.

First there was Rabbi Dovid Soloveitchik, the 99-year-old heir to a vaunted tradition of Talmud study. A few hours later it was Rabbi Yitzchok Sheiner, the 98-year-old leader of a prominent yeshiva. And in the evening they took Rabbi Dr. Abraham J. Twerski, a psychiatrist and scion of multiple Hasidic dynasties, to his final resting place near Beit Shemesh.

By nightfall, the Orthodox world could count three fewer rabbinic scholars than when the day began. All died of COVID-19, the disease that has killed well over 2.3 million people around the world, including more than 400,000 in the United States and nearly 5,000 in Israel. In Israel, 1 in 132 haredi Orthodox Jews over 65 had died of COVID-19 by the end of 2020.

The weekend’s losses were relentless in their pace, but they reflected a cruel fact of life in the Orthodox world over the past year. A long list of Orthodox rabbinic leaders have died, leaving communities reeling from their losses and at times wondering who will emerge to fill their shoes. The deaths from COVID — and from other causes during a pandemic that curtailed the mourning rituals that usually follow the deaths of major rabbis — spanned the range of the Orthodox community, from Modern Orthodox to Lithuanian, or non-Hasidic haredi, to Hasidic.

In some cases, the deaths of major rabbis signaled the end of an era in which men who attained high levels of secular education also joined the ranks of the generation’s leading rabbis, something that has become more rare as time goes on. And in others, the rabbis who died were symbols of connection to a past era of Orthodoxy in which the quality of Torah study was deemed to be higher and holier.

The rabbis leave behind many disciples who have dedicated their lives to study, so their deaths do not signal the demise of traditions, as may be the case, for example, for some Native American tribes whose elders have been hit hard by the virus. Still, the rabbis symbolized a connection to the past that is highly valued in a community based on the transmission of a tradition said to date back to the giving of the Torah to Moses at Sinai.

“It represents periods of real Jewish glory in terms of Torah scholarship,” said Rabbi Menachem Genack, chief executive officer of the Orthodox Union’s kosher division. “We’re looking for that link to what was.”

The losses began early in the pandemic. In the United States, there was the Novominsker Rebbe, Rabbi Yaakov Perlow, a member of the rabbinical council for Agudath Israel, a haredi Orthodox advocacy group. Perlow died of COVID in early April, just a few weeks after he exhorted the haredi community to take precautions to stop the spread of the coronavirus.

“The loss to [the Jewish people], and Agudas Yisroel, is incalculable,” Agudath Israel said at the time in a statement, using an alternate spelling of its name, not yet knowing how much greater the losses would be.

Deaths piled up in the haredi community in New York during the spring, though few who died were as prominent as Perlow.

Meanwhile, the Modern Orthodox world suffered a series of devastating losses. Rabbi Norman Lamm, a former president of Yeshiva University who had used his post there to promote his vision of Modern Orthodoxy, died at age 92 in May. His wife, Mindella, died the month before of COVID-19 at 88.

In August, Rabbi Adin Steinsaltz, a scholar whose expertise ran the gamut from Jewish mysticism to prayer to theology to ethics, but who became more famous for his translation of the Talmud into modern Hebrew, died at 83. Steinsaltz did not die of COVID.

Just a day before, Rabbi Dovid Feinstein, son of the most famous Orthodox Jewish legal authority of the 20th century, Rabbi Moshe Feinstein, died at 91. In December, Rabbi Gedalia Dov Schwartz, a longtime judge in Jewish legal courts, died in Chicago at 95, as did Rabbi Yehuda Herzl Henkin, a pioneer in the world of Orthodox Jewish feminism, who died in Jerusalem at 75.

Those who died were sometimes mourned for what they symbolized as much as for their individual accomplishments.

“Rav Dovid was the last surviving son of the Brisker Rav,” Genack said of Soloveitchik. The Brisker Rav, Rabbi Yitzchak Zev Soloveitchik, moved the Brisk Yeshiva from Poland to Jerusalem in the 1940s and helped promote the Brisker method of Talmud study, which has since become popular throughout the Orthodox world.

“You feel that loss in the sense of that living link that we had to … Brisk before is gone,” Genack said.

Soloveitchik, at the age of 99, also was one of the dwindling number of rabbis who was born in prewar Poland, another link to the yeshiva world that thrived in Eastern Europe and was almost entirely wiped out during the Holocaust.

In the United States, Feinstein formed that link, if not to the world of prewar Europe then to the decades when his father was the leading Orthodox rabbi in America. Moshe Feinstein’s mastery of Jewish law commanded respect from nearly every sector of the Orthodox community.

Twerski, a Milwaukee native, represented another connection to a way of living as an Orthodox rabbi that has become rare. He was the son of a Hasidic rabbi who attended public school and later medical school in addition to learning in yeshiva and becoming a rabbi. Twerski became known both for his contributions to the field of psychiatry as well as his writings on Jewish subjects. And he combined the two in some of his 60-odd books, and in appearances at academic conferences where he presented papers dressed in Hasidic garb.

“He was a great believer that there was no contradiction,” said Rabbi Dr. Tzvi Hersh Weinreb, a psychologist and former executive vice president of the Orthodox Union. “A person could be a person of great faith and a rigorous scientist.”

Few people who attain Twerski’s level of recognition in the Orthodox community today also have graduate degrees, particularly in the sciences, with many foregoing a college education.

In the Lithuanian, or “yeshivish” world, encompassing the haredi Orthodox community that is not Hasidic and centers around yeshivas like Soloveitchik’s Brisk yeshiva, most of the rabbis lost this year were in their 80s or 90s. Rabbi Aaron Kotler, CEO and president of the Beis Medrash Govoha in Lakewood, New Jersey, the largest yeshiva of the non-Hasidic haredi community in the United States, said that was no coincidence.

Yet the fact that so many Orthodox leaders have died of COVID-19 has not spurred their followers to pay greater heed to public health advice meant to slow the virus’ spread. Thousands attended the Sheiner and Soloveitchik funerals in Jerusalem, with few wearing masks in violation of Israel’s lockdown.

“Most of the leaders are in their 80s and 90s, so it’s relatively easier to detach yourself from [attributing it to] COVID. A person of 89 or 99 passes away, you know that can happen without COVID,” Genack said. “So in that sense it’s not a game changer.”

Not only have the deaths of beloved leaders from COVID not encouraged the community to take greater precautions in stopping the spread of the virus, they have even galvanized some to double down, according to Kimmy Caplan, a professor of Jewish history at Bar-Ilan University in Israel who studies haredi communities.

“They take the loss and the mourning and it gets a twist in educational terms,” Caplan said. “It becomes a trigger for enhancing the community and for strengthening the community.”

In the Modern Orthodox community, the losses of Sacks, Henkin, Steinsaltz and Lamm registered as the rapid disappearance of rabbis who combined serious study with thought leadership.

Rivka Schwartz, an associate principal at SAR High School in the Bronx’s Riverdale neighborhood and a research fellow at the Shalom Hartman Institute who writes frequently about politics and the Orthodox community, said she found Lamm to be the voice she missed most.

“He articulated a philosophy,” Schwartz said of Lamm, thinking back to the sermons on race in America that he delivered in the 1960s. “The loss of somebody doing that for the community, I think the Modern Orthodox community feels very acutely.”

The loss of Sacks left the community without its most articulate spokesperson, even if he was often speaking to an audience that included non-Jews in many of his popular writings. In contrast to the yeshivish community, where yeshiva leaders who die are generally replaced by another elderly scholar, the Modern Orthodox community does not have a clear succession plan for someone to fill the shoes of a Rabbi Lamm or a Rabbi Sacks.

“I do think that is a gaping hole,” Schwartz said, “and that’s not going to be filled by somebody else sitting in the rosh yeshiva’s chair.”

Schwartz said another gaping hole has gone largely unacknowledged: the deaths of untold numbers of Orthodox women who have died during the pandemic and rarely rose to prominence for their contributions because they were kept out of the rabbinate in all but the most progressive Orthodox communities. Typically they are memorialized in obituaries as the wife or mother of a rabbi rather than for their own accomplishments.

“That’s structural, if no woman is ever a public figure, they won’t be on the lists,” said Schwartz, who grew up in the haredi Orthodox community and wrote an obituary for her teacher, Chaya Ausband, who died in May at 96. “The people who taught me and who are important in that community don’t speak in public, so even people who play important roles … are not remembered in public in the same way.”

Few expect the deaths to end with these rabbis, as the virus continues to spread. And younger rabbis, some trained by the rabbis who died, will eventually fill the absences they left behind. But for now, the year’s losses continue to weigh heavily on the community.

“I don’t mean to say that these people are irreplaceable — they’re not irreplaceable, people can go on,” Genack said. “But this corona has taken a huge toll.”