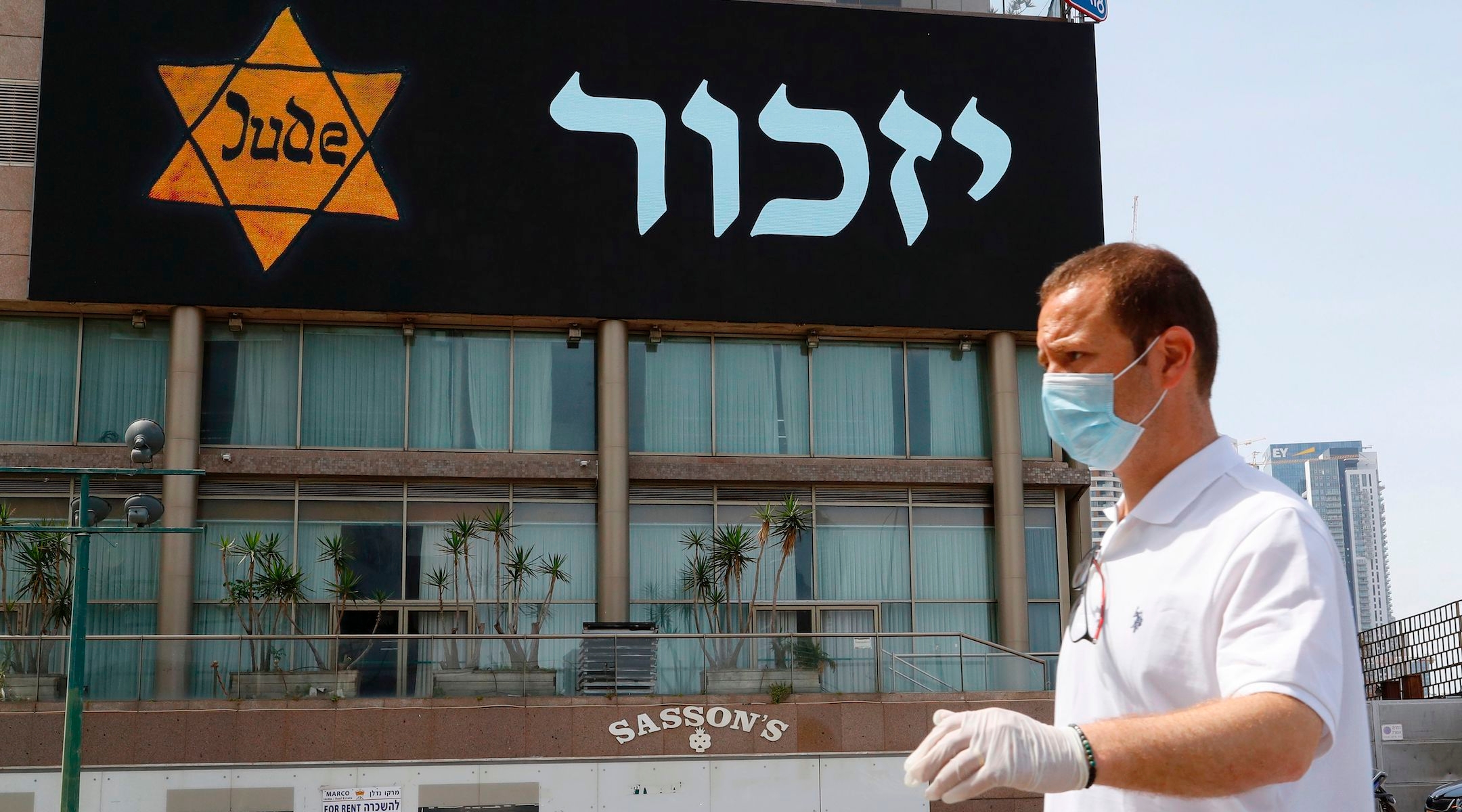 A man in a mask and protective gear stands near a banner depicting a Holocaust-era yellow Star of David in Tel Aviv on April 21, 2020. (Jack Guez/AFP via Getty Images)
Advertisement

(JTA) — Political activists, including Rep. Madison Cawthorn and the ambassador to Germany under Donald Trump, are comparing the idea of “vaccine passports” to Nazi Germany, with many invoking the yellow Stars of David that Nazis forced Jews to wear during the Holocaust.

Other opponents of public health restrictions have suggested or implied that the idea of opening recreational spaces only to those who aren’t at risk of COVID is similar to the Nazis’ persecution of Europe’s Jews, which culminated in genocide.

The trend is the latest instance of people, generally but not only on the political right, equating public health mandates they don’t like to the Holocaust — a practice that anti-Semitism watchdogs and Holocaust scholars have repeatedly condemned.

“To compare COVID-19 rules to the slaughter of millions in the Holocaust is disgusting, wrong and has no place in our society,” Anti-Defamation League CEO Jonathan Greenblatt tweeted last year.

Vaccine passports refer to documentation that would allow those who have been vaccinated against COVID-19 to access public spaces such as gyms, malls, museums or theaters that would require such proof in the future. The Biden administration is working on creating a vaccine passport system as vaccination numbers ramp up, according to The Washington Post.

Israel, which has inoculated the majority of its population of 9 million, has been implementing a vaccine passport system for about a month. Supporters of the idea say it will allow vaccinated people to enjoy a relative return to normalcy while encouraging others to get the vaccine.

Throughout the pandemic, anti-lockdown activists have compared COVID-related public health restrictions to the Holocaust. The idea of vaccine credentials — a digital proof of vaccination or a negative COVID-19 test reportedly being considered by the White House and already rolled out in New York State — has riled conservatives.

“Proposals like these smack of 1940s Nazi Germany. We must make every effort to keep America from becoming a ‘show your papers society,’” said Cawthorn, a freshman Republican congressman from North Carolina, according to Fox News. “The Constitution and our founding principles decry this type of totalitarianism.”

Earlier this year, Cawthorn sparked concern among some Jewish leaders in his district when he tweeted an adaptation of a popular poem about the Holocaust, apparently to advertise his online campaign store.

Others tweeted that vaccine passports are comparable to the yellow stars, often inscribed with the word “Jew,” that the Nazis forced Jews to wear in public.

“Are the vaccine passports going to be yellow, shaped like a star, and sewn on our clothes?” the Libertarian Party of Kentucky tweeted on Monday.

Defending the comparison, the party tweeted later that day that vaccine passports are “a complete and total violation of human liberty. This is the stuff of totalitarian dictatorships.”

In a Tuesday tweet that has since been deleted, the Libertarians also condemned “banksters and politicians” and displayed a quote, ostensibly by a member of the Rothschild family, about how being able to “issue and control a nation’s money” is more important than being able to write laws.

The false notion that the Jewish Rothschild family controls international finance is an age-old anti-Semitic stereotype.

Richard Grenell, former President Donald Trump’s ambassador to Germany and a member of the U.S. Holocaust Memorial Council, tweeted a meme showing a Nazi Gestapo officer in the Quentin Tarantino film “Inglourious Basterds” saying “You’re hiding unvaccinated people under your floorboards, aren’t you?” The original line from the movie uses similar wording in referring to Jews.

In Britain, conservative pundit James Delingpole tweeted, “Wouldn’t it be better just to cut to the chase and give unvaccinated people yellow stars to sew prominently onto their clothes?”

On Tuesday, the ADL and others noted that in 2019, Grenell tweeted, “Never compare the Holocaust to anything. Ever.” At the time, Grenell was referring to liberals who had compared immigrant detention facilities on the Southern border to concentration camps. Rep. Alexandria Ocasio-Cortez, the New York Democrat, used the comparison and invoked the phrase “Never again,” a term most commonly associated with the Holocaust.

Following Ocasio-Cortez’s statements, several Jewish organizations either urged caution in using Holocaust analogies or came out against the comparison. Others, mostly on the left, endorsed the New York lawmaker’s words. Some of the cautioning groups, including the ADL, have also come out against other comparisons of Trump or his policies to Nazis or the Holocaust.

The U.S. Holocaust Memorial and Museum said in a statement that week that it “rejects efforts to create analogies between the Holocaust and other events, whether historical or contemporary.”