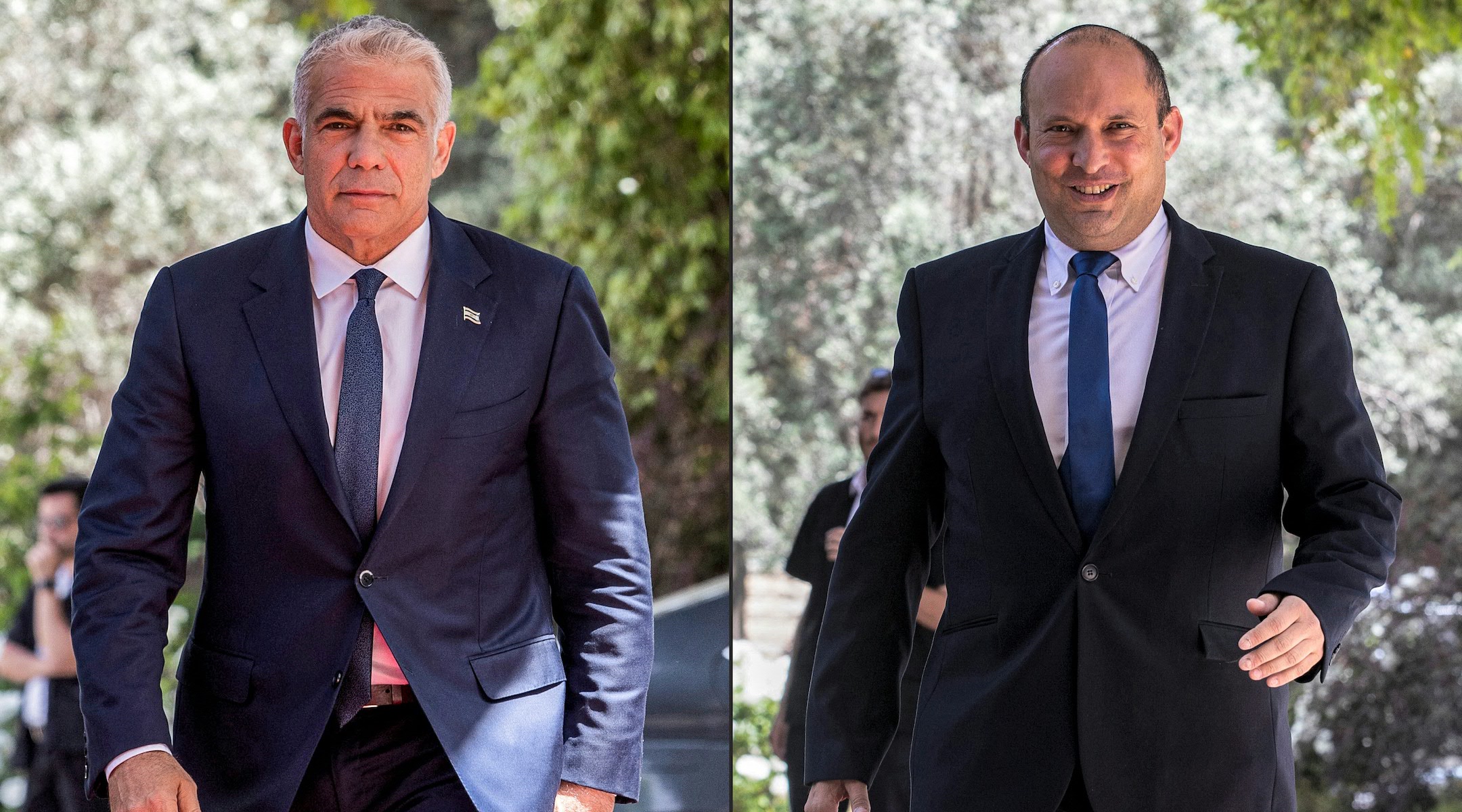 (JTA) — Benjamin Netanyahu will no longer be Israel’s prime minister, as his political opponents announced Wednesday night that they have formed a coalition that will replace him, pending a vote in Israel’s parliament.

The new coalition, dubbed the “change bloc,” is an ideologically broad alliance that spans the Israeli political right, center and left. For the first time in Israeli history, it will include an Arab-Israeli party, not as an external supporter of the government, but as a full member of the coalition. It comprises 61 lawmakers, the smallest possible majority in Israel’s 120-seat parliament, the Knesset.

The coalition was announced by Yair Lapid, head of the centrist Yesh Atid party, with less than an hour to go before his chance to form a governing coalition expired.

“I have announced to his excellency, the president of Israel, Reuven Rivlin, that I have been able to successfully conclude the work of assembling a government,” Lapid posted on Facebook on Tuesday night, 34 minutes before the midnight deadline. “I vow that this government will work in service of all of Israel’s citizens, those who voted for it and those who did not. It will respect its opponents and do everything in its power to unite and connect between all parts of Israeli society.”

For the first two years-plus of its term, the coalition will be led by Naftali Bennett, head of the right-wing Yamina party. Bennett will be Israel’s first Orthodox prime minister. Lapid will take over for the second half of the term.

Netanyahu has led Israel for the past 12 years.

READ MORE: Everything you need to know about the Israeli government that will replace Benjamin Netanyahu

The coalition includes eight parties in total that differ vastly on their vision for Israel, but agree on the need to end the Netanyahu era and the political crisis that has gripped Israel since 2019. Over the past two years, Israelis have voted in four elections whose results have been mostly inconclusive. Had Lapid failed to announce a coalition, Israel would have almost definitely held a fifth election later this year.

The new Israeli government, most significantly, will be the first one since 2009 not led by Netanyahu, who is the longest-serving prime minister in Israeli history. He was indicted on corruption charges in 2019 and his trial is ongoing, one of the main factors that led former right-wing allies of his, such as Bennett, to join his opponents.

To agree to partner with each other, the incoming coalition’s eight parties had to overcome a range of disagreements over policy and ministerial positions. In addition to Yamina and Yesh Atid, the coalition will include the right-wing parties New Hope and Israel Beiteinu; the centrist Blue and White party; the left-wing Labor and Meretz parties; and the Arab-Israeli Raam party, which is Islamist.

The new government is set to be approved in a Knesset vote sometime before June 14. Negotiations over its particulars, as well as efforts to undermine it, may continue until the vote takes place.

Following the most recent Israeli election in March, Netanyahu was given an opportunity to form another governing coalition, but failed to do so. In early May, the chance to form a coalition was passed to Lapid, Netanyahu’s chief rival. Lapid was reportedly close to announcing a coalition right before Israel’s recent conflict with Hamas in Gaza, but the fighting put coalition negotiations on hold.

Negotiations resumed following a ceasefire between Israel and Hamas, and ramped up on Tuesday and Wednesday, as Lapid’s deadline neared. Even as Lapid has obtained the support of all of the party leaders in the incoming coalition, there are reportedly still disagreements that the party leaders need to resolve.

Partisan rhetoric has also heated up in recent days in Israel, and members of the incoming coalition have been provided with added security after receiving threats of violence. Tamar Zandberg, a member of the left-wing Meretz party, left her home with her baby after she received threats to their lives.

The new coalition was announced on the same day that Isaac Herzog,  a former leader of Israel’s Labor party, was elected president of Israel, a largely ceremonial role.