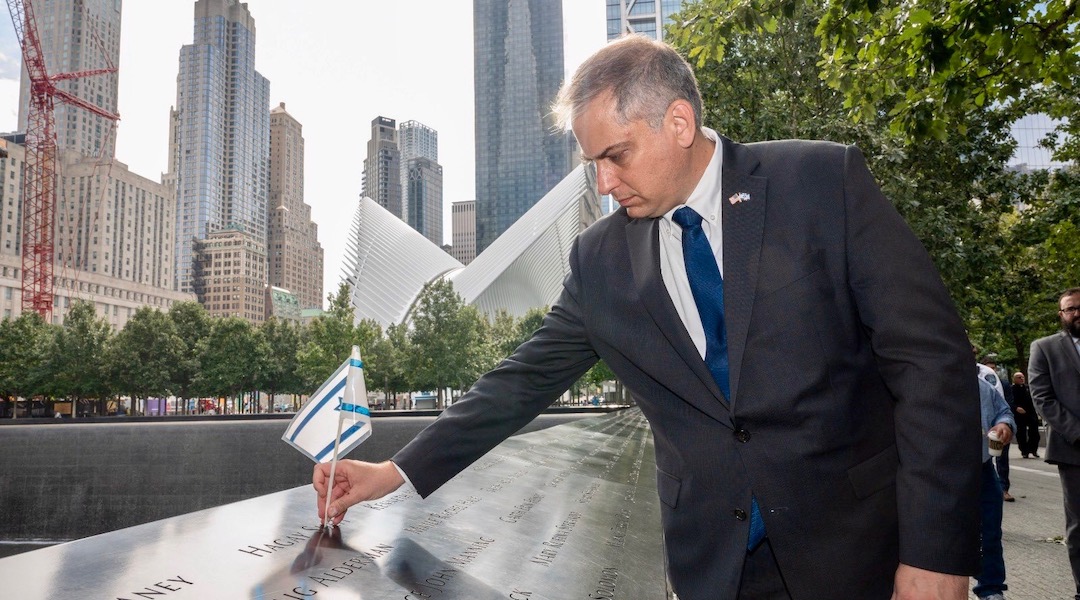 Israel Nitzan, Israel's acting consul general in New York, places an Israeli flag in memory of the victims of the Sept. 11 terrorist attacks, in a ceremony marking the tragedy's 20th anniversary on the Hebrew calendar, Aug. 31, 2021. (@IsraelinNewYork)
Advertisement

Want a printable digest of this week’s best stories to read offline? Download this week’s edition here and sign up to get The Jewish Week/end in your inbox every Friday.

AFTER THE DELUGE: A “Unity” Torah scroll written to honor members of the Hatzalah ambulance service was damaged beyond repair when Hurricane Ida flooded a basement synagogue in Williamsburg. (collive)

MAZEL TOV: Writer Amy Klein welcomes 54-year-old Knesset member Merav Michaeli’s announcement that she and her husband had a son born via surrogacy — and recalls her own efforts to help pass the Child-Parent Security Act in New York, making surrogacy legal. (Kveller)

SHUL AND STATE: An editor for Chabad.org says the Orthodox community is facing “persecution” by activists who say yeshivas are “concentrating too much on Jewish teachings and neglecting secular education.” (Wall Street Journal)

Still making plans for the High Holidays? The Jewish Week’s guide to online and in-person services is here to help.

The Museum of Jewish Heritage presents an in-person screening of “Abe,” a 2019 film about a 12-year-old half-Israeli, half-Palestinian aspiring chef who wants his cooking to bring people together. $5 members; $10 non-members. Sunday, 2:00 p.m.

Photo, top: Israel Nitzan, Israel’s acting consul general in New York, places an Israeli flag in memory of the victims of the Sept. 11 terrorist attacks, in a ceremony marking the tragedy’s 20th anniversary on the Hebrew calendar, Aug. 31, 2021. (@IsraelinNewYork)