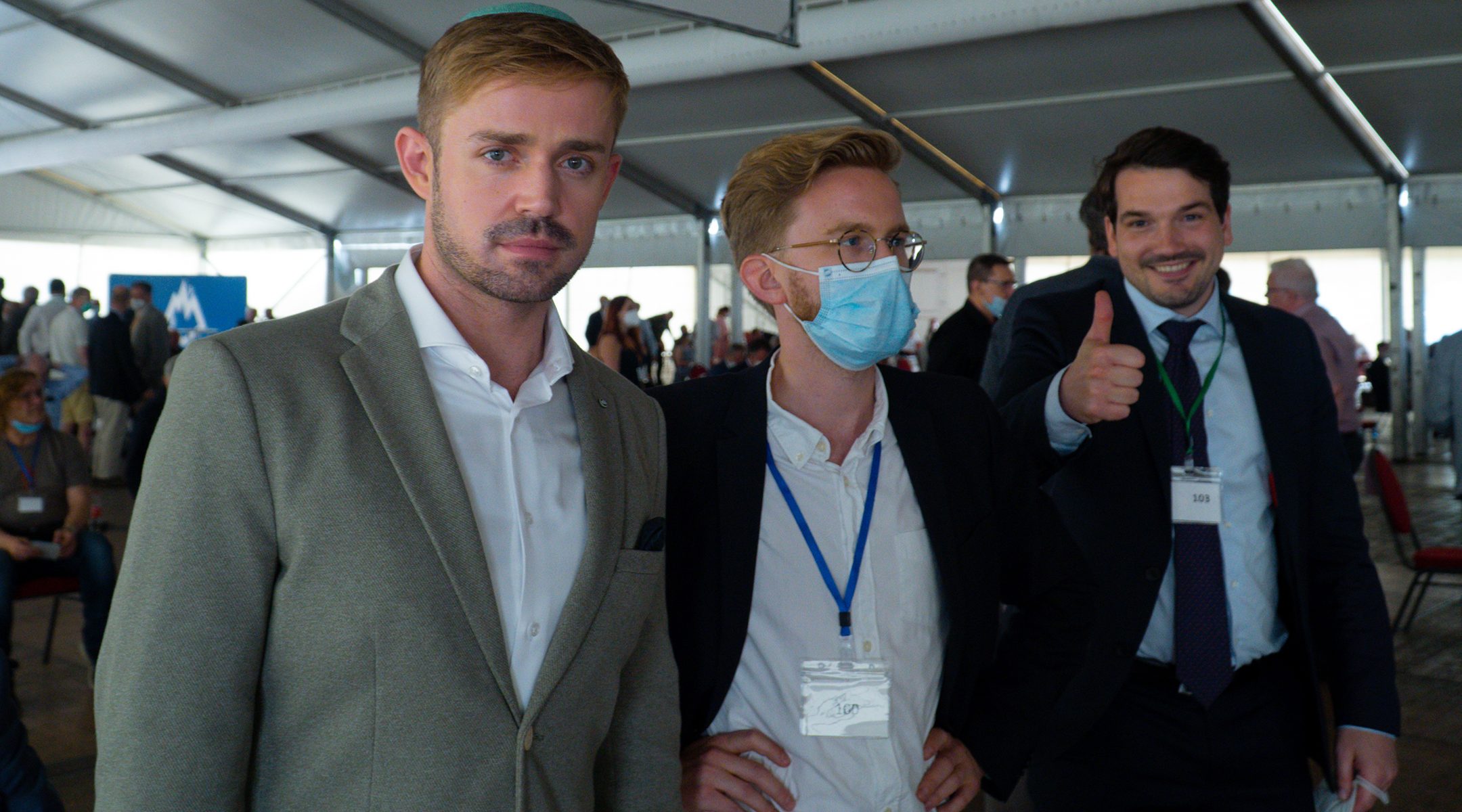 (JTA) – At a political rally in Berlin in June, a young Jewish gay man wearing a turquoise kippah launched his campaign to represent one of Germany’s most ethnically diverse constituencies in parliament.

The man, 34-year-old Marcel Yaron Goldhammer, promised to stoke the “embers of unity, justice and freedom” during his announcement speech in front of about 200 people in the southeastern Berlin neighborhood of Neukolln.

But he’s not running for a liberal party, or one promoting multiculturalism.

Goldhammer, a dual German-Israeli citizen and a former soldier in the Israel Defense Forces, is running on the ticket of AfD, or Alternative for Germany, a right-wing populist party that opposes immigration from Muslim countries and wants Germany to leave the European Union. Its critics call it radical, inherently xenophobic and antisemitic.

Goldhammer is the party’s no. 6 candidate in Berlin, where it won four seats during the last elections. Germany goes to the polls again on Sunday.

“It’s not a sure thing that I’ll become a lawmaker, but it’s definitely within the realm of possibility,” he said.

Goldhammer belongs to a growing minority of Jews in Western Europe who have joined the ranks of the populist right because of its nationalist ideals and its opposition to Muslim immigration. They believe left-wing movements threaten the future of European culture, as well as that of the continent’s Jewish minority.

A former supporter of outgoing Chancellor Angela Merkel’s center-right Christian Democratic Union party, or CDU, Goldhammer grew up in Germany in a “culturally Christian home,” as he defined it in an interview with the Jewish Telegraphic Agency. His parents worked shifts at a local factory in Kaiserslautern, a city situated about 380 miles southwest of Berlin.

But his life took an unexpected turn when he came out as gay at the age of 15.

“My mother had a hard time with it. It became hard to continue living at home,” he said.

So he left for Berlin, where he completed his high school studies while living at a housing project for teenagers in similar situations. He was pursuing a career as an actor when his interest in religion brought him in contact with a Reform Jewish community.

Finally, Goldhammer says, he felt like he was home. He decided to convert, completing the two-year process in 2005. Upon visiting Israel for the first time, Goldhammer “fell in love,” he told Israel Hayom, an Israeli newspaper, in an interview. “I knew I wanted to live there.”

He immigrated to Israel in 2013, shortly before the 2014 Gaza War between Hamas and Israel.

That was the beginning of Goldhammer’s rightward shift from Merkel’s CDU to Alternative for Germany, he told JTA.

“I came from a place where being proud of your identity, if it’s German, is wrong, to a place where the opposite was true, a place that doesn’t dismiss itself,” he said of Israel.

Goldhammer says he was shocked by “the real freedom of expression” in Israel.

“Sure, the media has its preferences, but everyone can speak their mind. Not only about politics, occupation, Hamas. But also on the coronavirus,” he said. “This would never have been allowed to happen in Germany.” 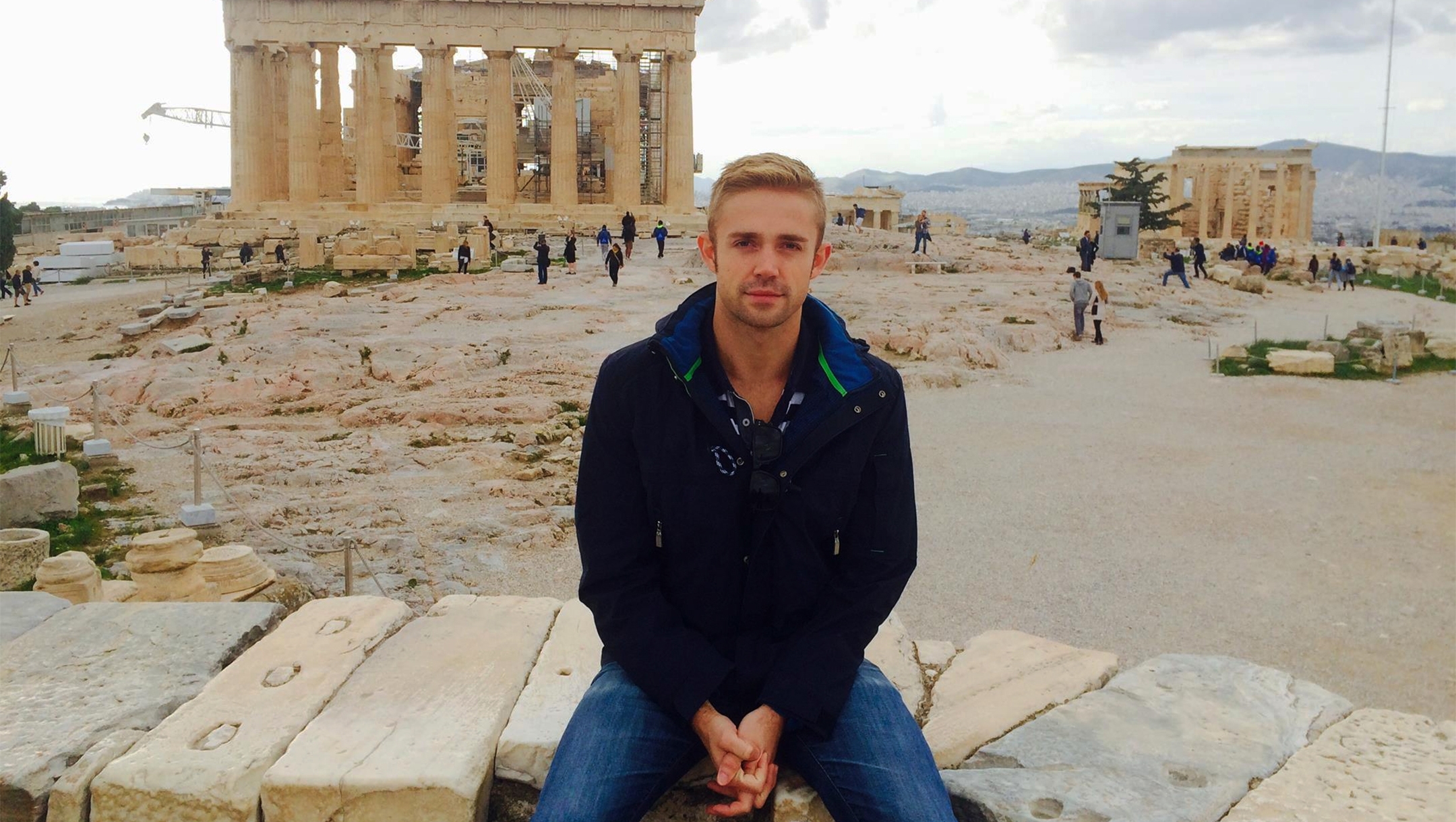 Marcel Goldhammer visits the Acorpolis in Athens, Greece in 2015. (Courtesy of Goldhammer)

Completing his army service in the Israel Defense Forces spokesperson’s unit, Goldhammer put down roots in Tel Aviv. But his partner, a Chinese national, wanted to live in Europe, so they returned to Germany, where he now works as an actor and model.

But his country, and especially Berlin, had changed in his absence, Goldhammer said.

In 2014, hundreds of thousands of immigrants, many of them asylum seekers from the Middle East and Africa, were allowed into Germany after a polarizing decision by Merkel. The influx heightened tensions and galvanized Germany’s neo-Nazi fringe, whose members have carried out several violent attacks on immigrants, left-wing politicians, journalists – and Jews.

For many, a spate of sexual assaults on women during street celebrations on New Year’s Eve in 2016 reflected the depth of Germany’s immigrant integration problem. And the scope of violent antisemitism began to climb precipitously, from an average of 342 incidents per year between 2013 and 2015 to 978 incidents on average annually in the following four years, according to the RIAS watchdog group.

In 2019, the surge came to a head when a young white supremacist tried to shoot his way into a synagogue in the city of Halle, near Berlin, on Yom Kippur. After he failed to break through the fortified door, he killed a patron of a kebab shop and another passerby.

Goldhammer, who does not usually wear a kippah, has not been the target of any antisemitic incidents, but says he has witnessed antisemitic hate speech, mainly by Muslims.

The 2018 rape and murder near Frankfurt of Susanna Feldmann, a Jewish 14-year-old, by a 21-year-old asylum seeker from Iraq shocked Goldhammer especially. While the crime was never established to have been antisemitic in motivation, it was widely perceived as symptomatic of the problems of mass immigration from societies where violence toward women and minorities is more widespread.

“I started to see that in far too many of the people who came, there was no desire to integrate. On the contrary,” Goldhammer said. “I’m all for immigration. It makes life more interesting. It enriches society. But only if it’s premised on belonging. But belonging is more difficult to people from the Middle East, especially those who despise European culture.”

RELATED: ‘A steadfast ally’: Angela Merkel’s departure from politics is a sad moment for many German Jews

These sentiments are not uncommon among today’s European Jews, who increasingly find themselves supporting and joining populist right-wing movements that were more widely considered untouchable 15 years ago — and still are by many Jews with bitter memories of the dangers of ultranationalism.

In France, a 2014 poll suggested that Jewish support for the far-right National Rally party was at 13.5% — just a few points below its total rate of support throughout the country. The party was formerly headed by Holocaust denier Jean-Marie Le Pen, but his daughter Marine succeeded him in 2011 and kicked him and other antisemites out the party — which she famously said in 2017 would be “the best shield” for Jews against radical Islam.

In the Netherlands, the Party for Freedom led by Geert Wilders, an anti-Islam and pro-Israel right-wing populist, emerged in a 2017 poll as third-most popular among Dutch Jews. About 10% of the 800 Jews polled said they would vote for Wilders’ party, which had the support of 15% of the general population that year.

But in the former cradle of Nazism, right-wing populism is especially alarming to many local Jews.

In 2019, Charlotte Knobloch, a Holocaust survivor and former president of the Central Council of Jews in Germany, during a speech in parliament said Alternative for Germany “bases its policy on hatred and exclusion.” The Council and dozens of other Jewish groups issued a statement ahead of the elections calling AfD “a hotbed for anti-Semitism, racism and misanthropy.”

Party leaders reject this, arguing that German society has overcompensated in its rejection of nationalism after Nazism.

But some of them make statements that few German Jews can tolerate.

Alexander Gauland, the party’s honorary chairman, in 2017 said that Germans “don’t have to be held accountable any more for those 12 years [of the Nazi regime]. They don’t affect our identity today any longer. And we’re not afraid to say so.” He added: “We have the right to be proud of the achievements of German soldiers in two world wars.”

The next year, he called the Nazi era “just a speck of bird poop in more than 1,000 years of successful German history.”

Such remarks are “unhelpful and regrettable,” Goldhammer said.

“My party does have antisemites, don’t get me wrong. But so do all other German parties. In Alternative, we kick them out as soon as they are found out,” he said.

The hostility of people like Knobloch and many other Jews “is easy to understand,” Goldhammer said. “She’s been through a lot of trauma and their families as well and a lot of German society. But that doesn’t mean that the populist right is automatically wrong about everything or immoral.”

“I’m against generalizations and offending people. Islam has a political dimension and that’s problematic. But it’s also a religion with many good people following it. So I’m against Islamist ideology: political Islam. I have no intention of insulting the faith or its members,” he said.

Despite criticism in the media and by many Jews, Alternative for Germany has increased its popularity in Germany — from 4.7% of the vote in the 2013 parliamentary elections to 12.6% in 2017, making it the third-largest party in Germany today.

In the years following his coming out, Goldhammer’s relationship with his parents has improved, he said. They don’t talk much about politics. And they don’t involve themselves with his conversion to Judaism, Goldhammer said.

“One exception was when I got circumcised. My mother was worried and called me to see if I was in pain, the way mothers do,” he said, laughing.

In the Israel Hayom interview, he recalled feeling hurt by how, in his account, his parents didn’t worry about him while he was serving in the army during the fighting with Hamas. Living with other soldiers who had made aliyah, he noticed how “they received telephone calls nonstop from their families,” Goldhammer said. It strengthened his resolve to be Jewish.

“It showed the great difference between Christian families and Jewish families, which tend to be close and caring — also because of the danger,” he said.