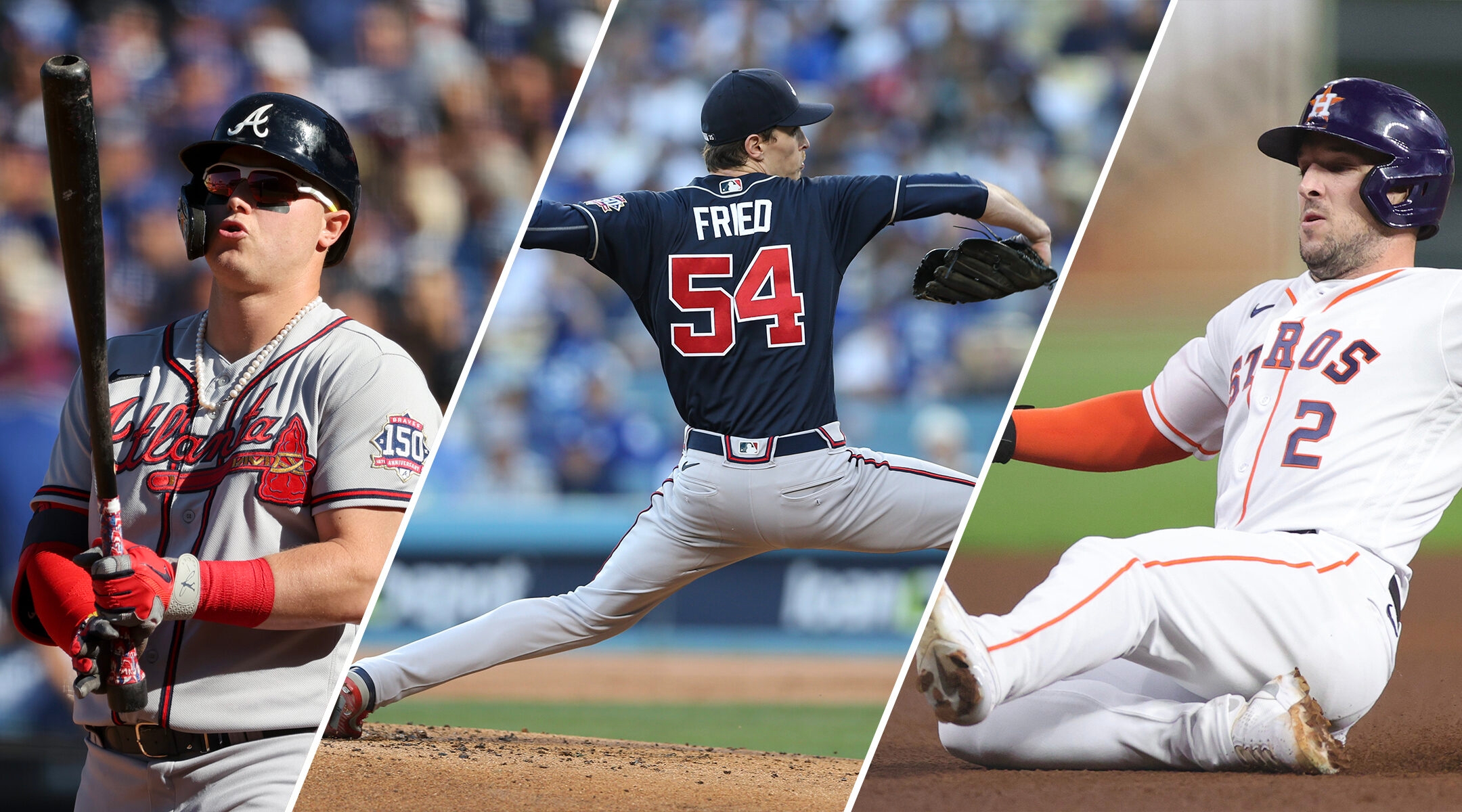 Editor’s note: This article has been updated to reflect the addition of Houston Astros catcher Garrett Stubbs to the team’s roster.

(JTA) — The World Series is upon us, and there are likely more Jewish players in this year’s edition than there have been in decades.

For Bregman and Pederson, it is a rematch of the infamous 2017 World Series, when Bregman’s Astros beat Pederson’s former team, the Los Angeles Dodgers, while using illegal sign-stealing techniques that led to high-profile suspensions. Pederson hit three home runs during the series, and Bregman added two of his own.

Hardcore Jewish baseball fans may recall the 1959 World Series, a matchup between the Dodgers and the Chicago White Sox, which also included three Jewish players: L.A.’s pitching roster boasted the legendary Sandy Koufax and the series’ Most Valuable Player, Larry Sherry, while Chicago had pitcher Barry Latman, although he did not appear in the series (just three years later, however, he would be named an All-Star).

But thanks to its Jewish talent, this year’s Series promises to feature just as many memorable Jewish moments. Here’s a Jewish guide to the 2021 Fall Classic. 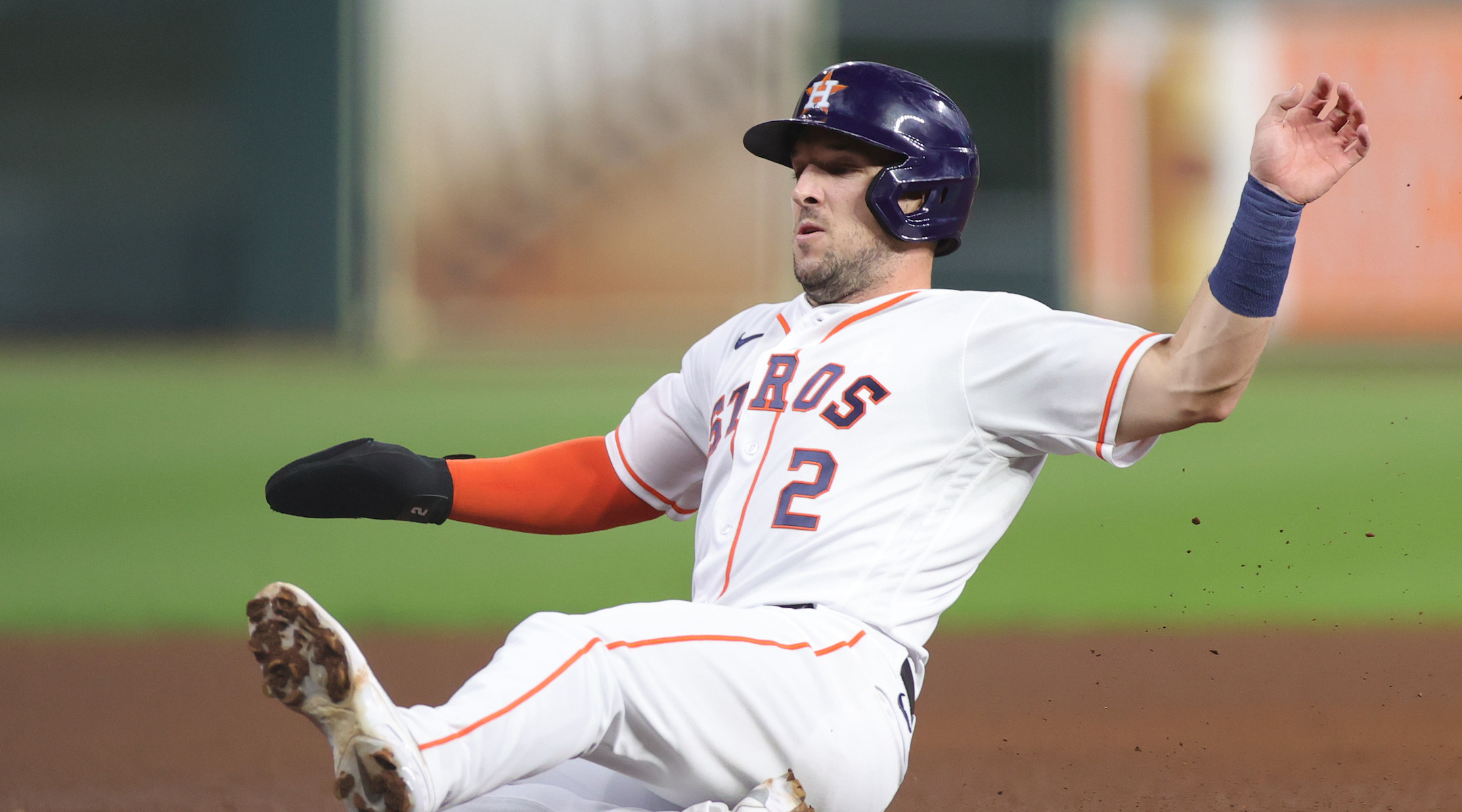 Alex Bregman slides into the third base in Game 6 of the ALCS against the Boston Red Sox at Minute Maid Park in Houston, Oct. 22, 2021. (Carmen Mandato/Getty Images)

Bregman is arguably the most prominent Jewish player in Major League Baseball today.

Bregman had a bit of a down year in 2021, missing more than two months with an injury.

His father, Sam, told the Jewish Telegraphic Agency in 2018 that he is “so proud” of his son representing the Jewish community in the big leagues. Bregman grew up attending a Reform synagogue in Albuquerque and had a bar mitzvah.

The Astros are playing in their third World Series in five years, meaning the third baseman has already played in 67 postseason games in his career. He has a .237 batting average in the postseason, with 59 hits and 12 home runs. He is hitting .282 so far this October. 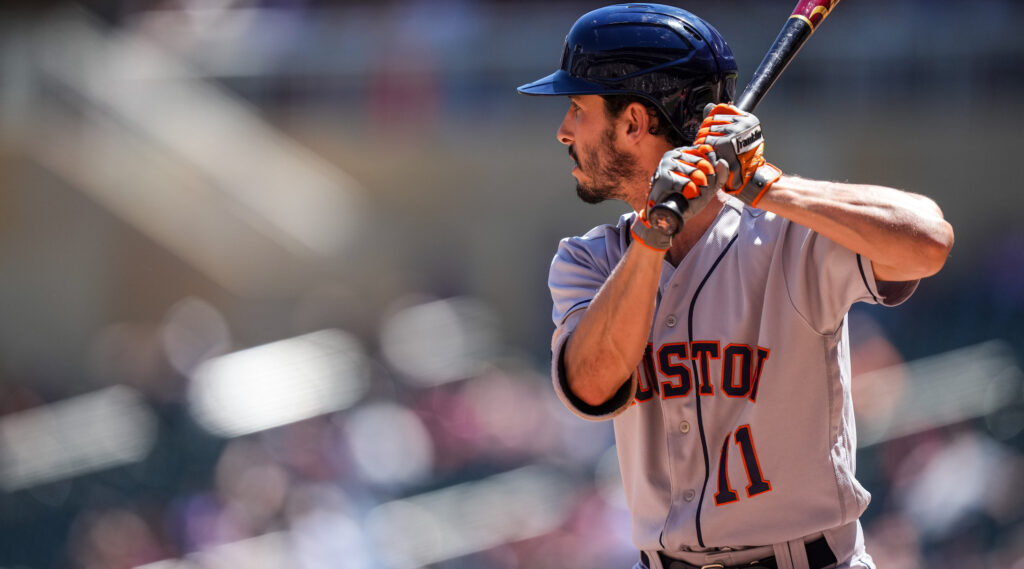 Stubbs is not likely to see much (if any) action in the World Series. He was added to the Astros roster prior to Game 4, after fellow backstop Jason Castro was placed on the COVID-19 related injured list Saturday.

Stubbs has only played in 51 big league games across three seasons in Houston.

The 28-year-old catcher was on the Astros roster for the American League Championship Series against Boston, but did not appear in a game.

The California native was named to the 2015 Jewish Sports Review All-America college baseball team, along with Bregman. 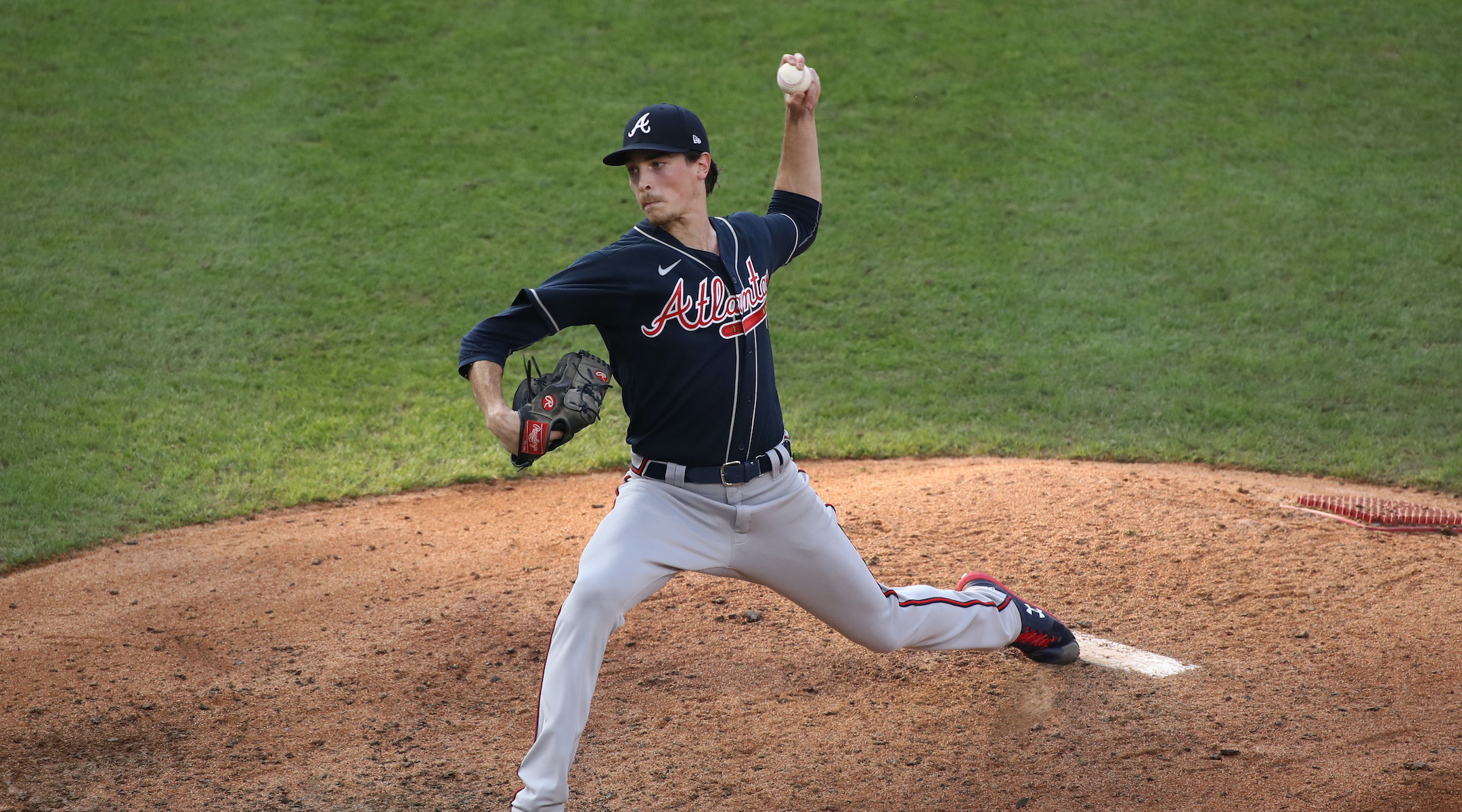 Max Fried pitches in a game for the Atlanta Braves against the Philadelphia Phillies at Citizens Bank Park in Philadelphia, Aug. 9, 2020. (Kyle Ross/Icon Sportswire via Getty Images)

Fried may well be the best Jewish pitcher since Sandy Koufax — his childhood idol. This season, the 27-year-old — who became the first Jewish lefty to start an Opening Day game in half a century, since Ken Holtzman did in 1971 — won 14 games while posting a 3.04 earned run average and led the MLB with two shutouts.

Fried told the Atlanta Jewish Times in 2017 that he grew up “fairly observant,” attending synagogue on the High Holidays and having a bar mitzvah. A Los Angeles native, Fried idolized Koufax as a child, and wore his #32 in high school.

Fried was also a member of the gold medal-winning USA juniors team at the 2009 Maccabiah Juniors competition, an international tournament for Jewish teenage athletes.

Despite taking the loss in Game 5 of the National League Championship Series, Fried has performed well in the postseason. In 15 career appearances (seven starts), he has a 3.86 ERA. He will start Game 2 of the Series for Atlanta on Wednesday. 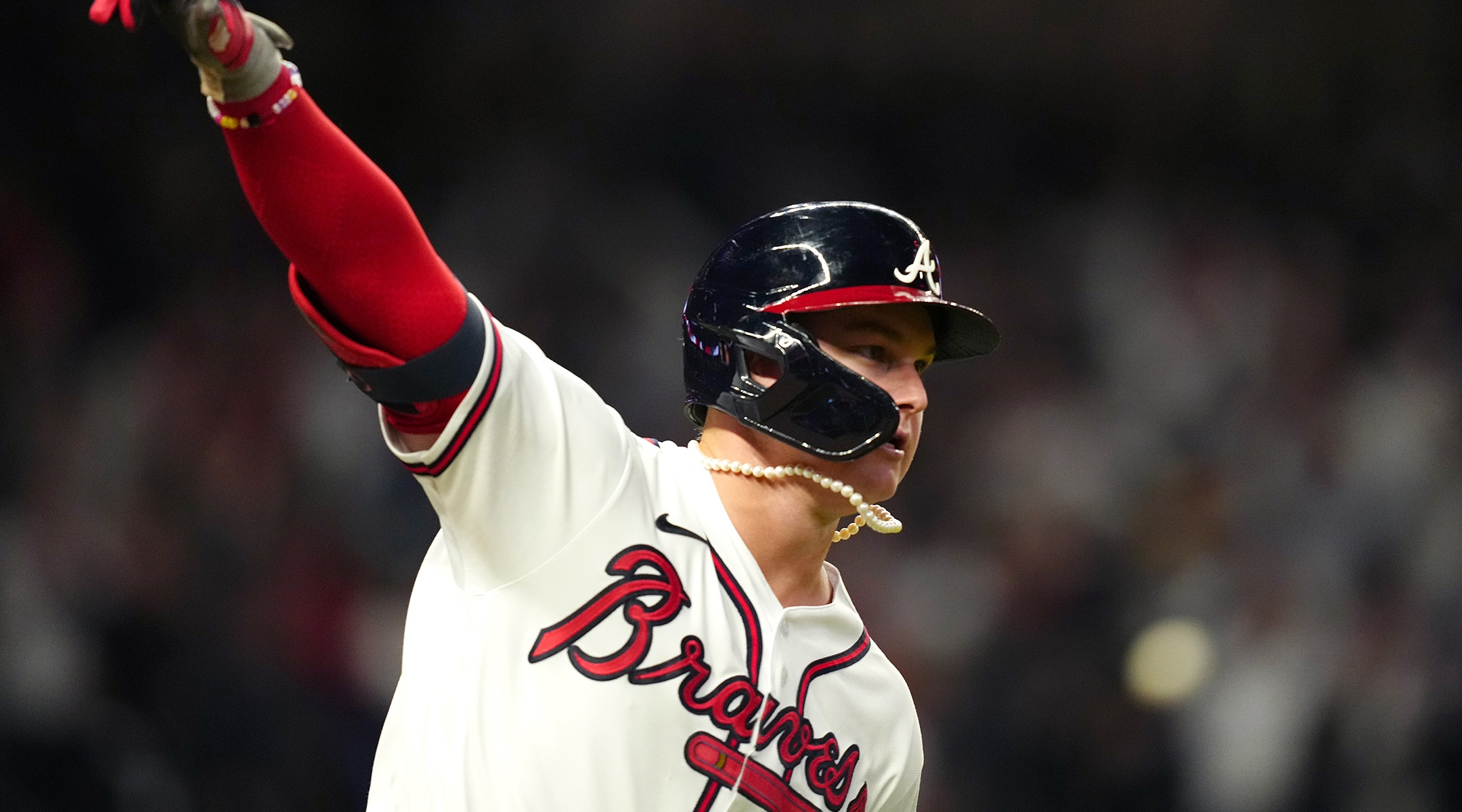 Joc Pederson rounds the bases after hitting a home run in an NLCS game against the Los Angeles Dodgers, Oct. 17, 2021. (Daniel Shirey/MLB Photos via Getty Images)

Last but not least, there’s Pederson — or the man who is turning October into “Joctober.”

This will be Pederson’s fourth World Series, and the 29-year-old outfielder has made a name for himself with clutch hitting for years in the postseason. In a total of 74 career playoff games, Pederson is a .272 career postseason hitter with 12 home runs and 49 hits.

In that 2017 Series in particular, he broke the record for most World Series home runs by a Jewish player.

And Pederson is still earning his nickname this year. In 10 postseason games, he has 8 hits, including three home runs, and nine runs batted in. (Plus, he’s been sporting a pretty stylish pearl necklace that has the baseball world buzzing.)

But he’s no chump in the regular season, either. Besides winning the 2020 World Series as a member of the Dodgers, Pederson is a former All-Star and Home Run Derby participant. He clubbed 36 home runs in 2019.

Pederson played for the Dodgers for seven years before signing with the Chicago Cubs prior to the 2021 season. He was then traded to Atlanta in July.

Pederson also played for Team Israel in the 2013 World Baseball Classic. It wasn’t easy — his mother, who is Jewish, had to jump through hoops to prove her son’s eligibility, with the help of the archivist at her father’s synagogue. Now he’s a member of multiple California Jewish sports halls of fame.