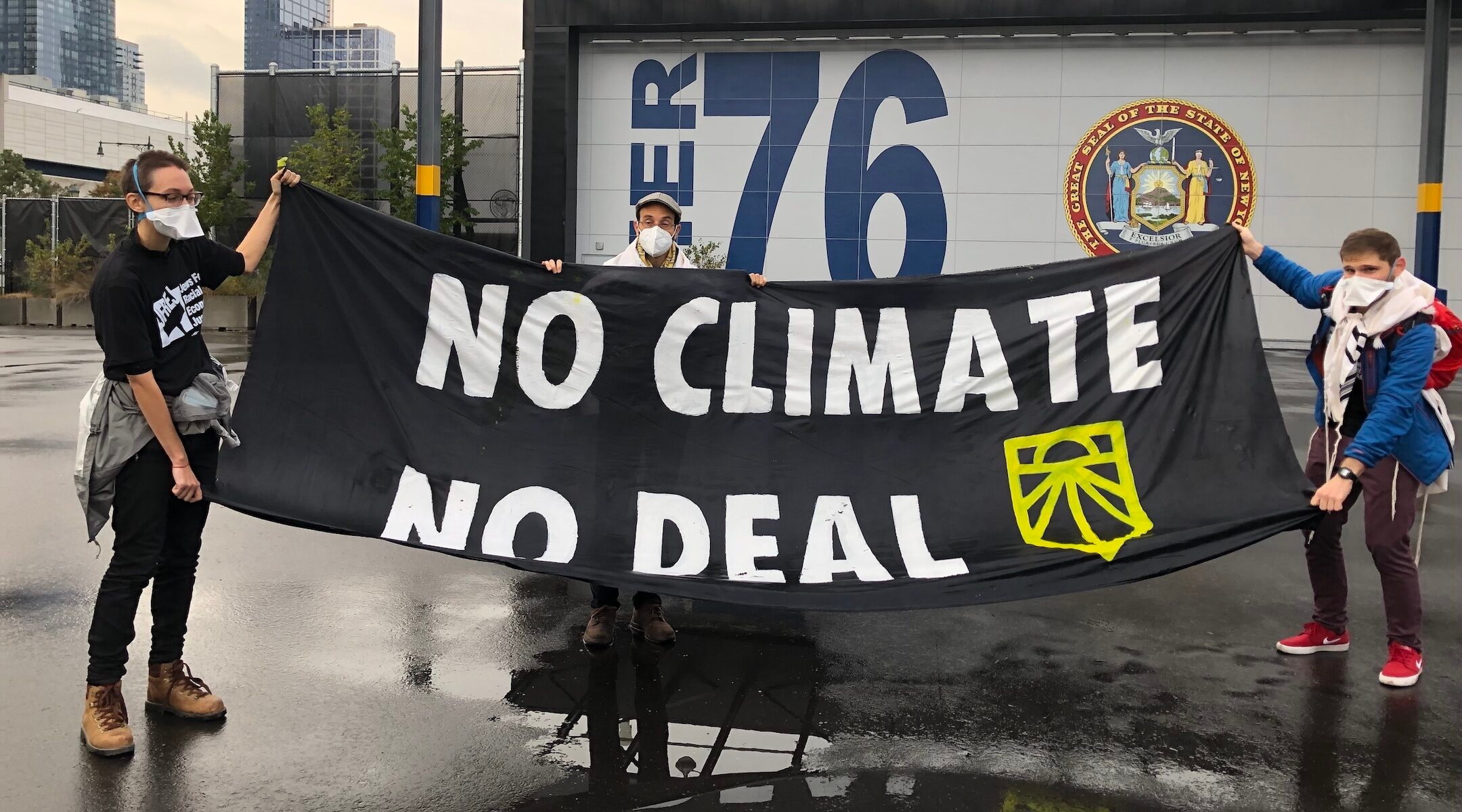 Rabbi Guy Austrian of the Fort Tryon Jewish Center in Upper Manhattan, center, takes part in a climate change protest organized by Sunrise Movement NYC and Jews for Racial and Economic Justice, Oct. 25, 2021. He and other protesters would later be arrested for blocking the West Side Highway. (Courtesy William Bozian)
Advertisement

Good morning, New York. Today is the third anniversary of the deadly shootings at the Tree of Life synagogue complex in Pittsburgh. Asaf Zamir, the Consulate General of Israel in New York, will participate in a ceremony in Pittsburgh today, organized by the 10.27 Healing Partnership, to honor the lives of the 11 people who perished. The Jewish Week’s Andrew Silow-Carroll writes about what the shooting and its aftermath revealed about the American Jewish community.

RABBI VS. RABBI: Our colleague Ben Sales takes a deep dive into the succession crisis at Manhattan’s Park East Synagogue, where the abrupt firing of the assistant rabbi has divided the monied Orthodox congregation, and supporters of the senior rabbi say they aborted an attempted coup. (JTA)

STILL HERE: Broadway is back, and The Jewish Week has seven good reasons — that is, seven shows with a strong Jewish connection — to lure you back to the theater. (Jewish Week via JTA)

MAZEL TOV: Chelsey Tabor and Jacob Horn met at a program for adults with special needs at the Marlene Meyerson JCC Manhattan; a 2023 wedding is planned. (Jewish Week)

Jay Black of “Jay and the Americans,” who claimed to have been thrown out of three yeshivas before a singing career that included hits like “Cara Mia,” “Come a Little Bit Closer” and a cover of the Drifters’ “This Magic Moment,” died Saturday in Queens at 82. Born David Blatt, he was raised in an Orthodox family in Brooklyn and sang as a youngster with the choir of the famed cantor Moshe Koussevitzky. (JTA)

Americans for Ben-Gurion University presents “Diversity and Inclusion in Israel,” a webinar featuring Sarab Abu-Rabia-Queder, BGU vice president for Diversity and Inclusion, and Guy Ben-Porat, chair of BGU’s Department of Politics and Government. Porat is spearheading the new Center for the Study of a Shared Society, which will serve as a research institution dedicated to the academic study of three schisms in Israeli society: the Jewish majority and the Arab minority; religion and state; and Mizrahim and Ashkenazim. Register here. Noon.

Workers Circle presents the first of a four-session program designed for beginner genealogists who want to learn more about how to start or continue their research. $150 for Workers Circle members, $180 for non-members. Register here. 5:00 p.m.

Photo, top: Rabbi Guy Austrian of the Fort Tryon Jewish Center in Upper Manhattan, center, takes part in a climate change protest organized by Sunrise Movement NYC and Jews for Racial and Economic Justice, Oct. 25, 2021. He and other protesters would later be arrested for blocking the West Side Highway. (Courtesy William Bozian)