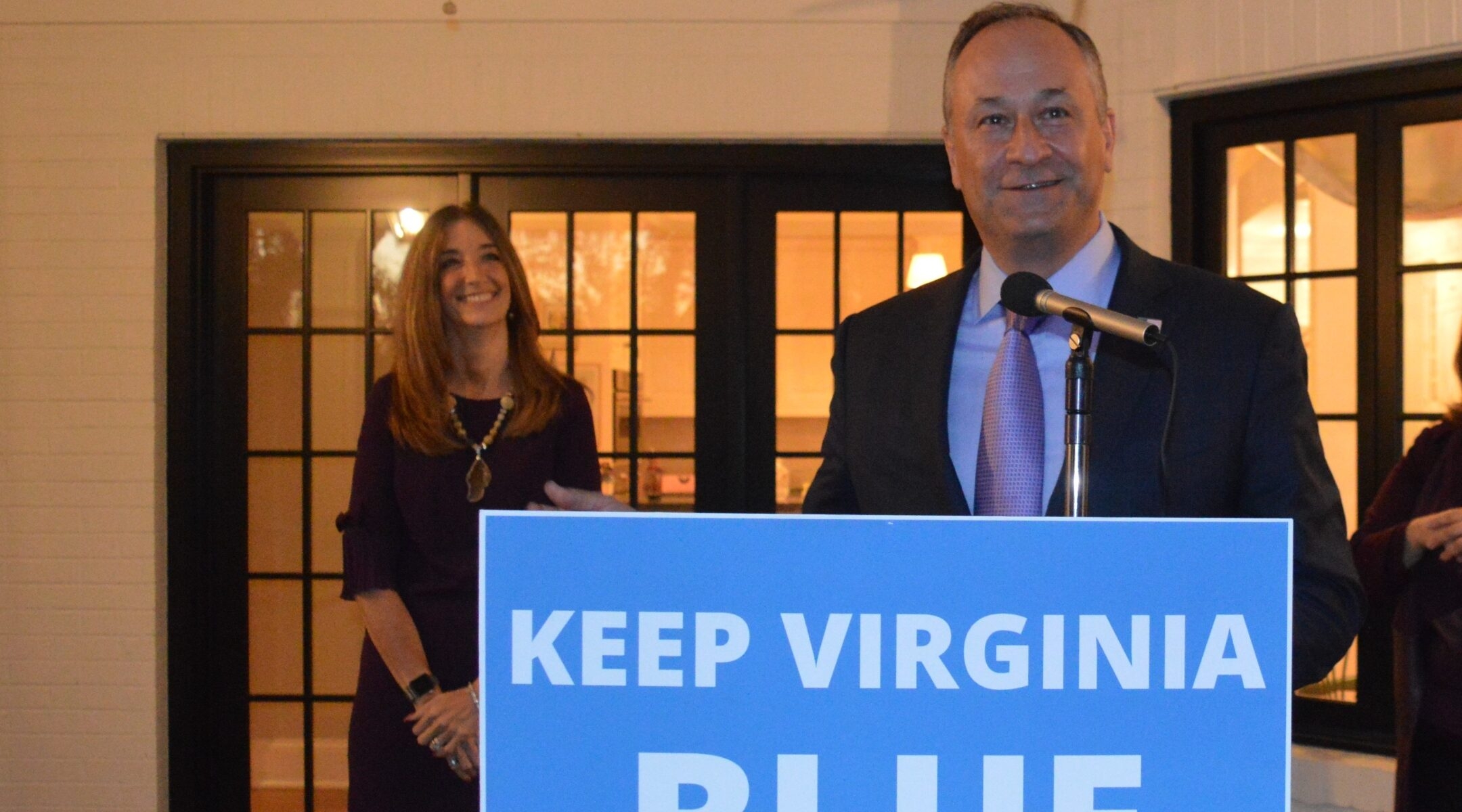 McLEAN, Va. (JTA) — On a crisp fall night in this leafy Washington, D.C. suburb, Doug Emhoff, the second gentleman, and Eileen Filler-Corn, the Speaker of the Virginia House of Delegates, had a message for a small but influential crowd: Antisemitism is on the rise and voting for Democrats is the best way to combat it.

Double-teaming a fundraiser last week at the home of Jewish Democratic bundlers Jeff Bialos and Leslie Kerman, Emhoff and Filler-Corn laid out a Democratic argument for Jewish voters ahead of next week’s gubernatorial elections — one that is likely to carry over into next year’s midterm elections.

“Over and over again more as of late we see this antisemitic and other deeply harmful language,” Filler-Corn said. “Even worse, from political figures all over the Commonwealth, we see a rise, there’s an uptick for sure. This is a disturbing indicator of how some individuals would lead if they were given the power.”

Less than two weeks before the Virginia gubernatorial election, Filler-Corn and Emhoff and their hosts were making the case to a group of influential Jewish Virginians that the perceived threat to Jews they identified with former President Donald Trump did not end when he left office.

Terry McAuliffe, a Democrat who is a former Virginia governor, is in a tight race with Glenn Youngkin, his Republican challenger, and the race has become nationalized as a bellwether of how the parties will fare next year.

Emhoff, emphasizing his standing as the first Jewish spouse of a vice president, said he would stay on message past the Nov. 2 Virginia election.

“It’s not just a Jewish issue, it’s an American issue, because I speak out against hate of all kinds,” he said. “Because if we let this go [when it comes to] antisemitism, where does that lead us? So we’ve got to make a stand, we’ve got to continue to speak out each and every time — I promise you as the first Jewish spouse in this position to speak out on these issues.”

Emhoff and Filler-Corn both noted that President Joe Biden launched his campaign in part because he was appalled at Trump’s equivocation after the 2017 neo-Nazi march in Charlottesville, Virginia, where one counter-protester was killed.

Biden has made clear he believes that antisemitism remains a present threat, saying so in his public statement this week on the third anniversary of the Tree of Life synagogue shooting that killed 11 worshippers in Pittsburgh. Speaking last week at an event marking the 10th anniversary of the installation of a monument to civil rights martyr Martin Luther King, Jr., Biden connected antisemitism to other forms of hate in the United States.

“There’s a through line of subjugation and enslaved people from our earliest days to the reigns of radicalized terror of the KKK to Dr. King being assassinated,” he said. “And through that — through that line continues to be the torches emerging from dark shadows in Charlottesville, carrying out Nazi banners and chanting antisemitic bile, and Ku Klux Klan flags; and the violent, deadly insurrection on the Capitol nine months ago.”

In an interview after the fundraiser, Filler-Corn, who was the state’s first Jewish and woman speaker when she assumed the role last year, said she’s been convening what she calls “nosh and schmooze” events for nine years, since near the start of her political career, as a sounding board for Jewish leaders. (She was careful to mention every rabbi present and his or her synagogue at the launch of her remarks.)

Filler-Corn’s speakership and the presence of the Jewish leaders are a signal of the growth and influence of the Northern Virginia Jewish community in the past several decades; it is now seen as the fastest-growing Jewish community in the Washington D.C. region, surpassing the Maryland suburbs, once the natural home of the area community. McAuliffe took out a full-page ad in last week’s Washington Jewish Week.

Jews have flocked to D.C.’s Virginia suburbs in part because of the growth of the high-tech sector in the area. Old-timers marvel at ostentatious displays of Jewishness in an area where as recently as the 1970s American Nazis kept their headquarters and Jewish residents laid low.

That history lends a potency to the threats Democrats are identifying in their campaign among the state’s Jews, a strategy likely to be replicated as campaigning intensifies ahead of the 2022 midterms. In her remarks, Filler-Corn noted that she recently discovered that she had been targeted for assassination by two white supremacists.

“It’s really scary and it’s something we all should recognize, acknowledge and be wary of, but not fear it, because I think we just have to be firm in our belief, in what we’re doing legislatively and making Virginia more open and welcoming,” Filler-Corn said. “We will not be deterred, we will not be threatened.”

The evening was not wholly or even mostly about Jews: Filler-Corn and Emhoff talked about a range of policies that would appeal to a liberal crowd, including combating Republican encroachments on abortion rights, defending LGBTQ rights, combating the coronavirus pandemic and advancing gun control.

Much of the focus was on getting out the vote now that Trump is not a spur to Democratic voters. “This is not the time to be complacent,” Emhoff said. “There’s no excuse here not to vote.”

But the Jewish-specific pitch was ever-present, and frequently focused on signs of antisemitism coming from the state’s Republicans. On hand was Dan Helmer, a Jewish delegate who was targeted with mailers that displayed him rubbing his hand at a pile of gold coins. Filler-Corn, speaking to the Jewish leaders, listed a number of Republican attacks on Jewish politicians and figures that Democrats have turned into campaign fodder, including on her. She noted how Youngkin last week without evidence accused liberal Jewish billionaire George Soros of furtively peopling school boards with radical leftists.

“Glenn Youngkin was in the 41st district, that’s my district, just a couple nights ago, spouting off antisemitic tropes, just to fire up his base,” Filler-Corn said.

Youngkin’s campaign dismisses the charge of antisemitism as groundless and distributed to reporters quotes from two right-wing rabbis saying that attacks on Soros are legitimate political fodder, although neither of the rabbis addressed the specifics of Youngkin’s attack.

“This accusation is just another dishonest attempt to win an election by playing the ‘anti-Semitism card,’” said Aryeh Spero, the president of the Caucus for America, a group that says “America’s roots are found in the Judeo-Christian outlook.” “It is specious chutzpah.”

For their part, Virginia Republicans also are pointing to instances of what they say is antisemitic behavior by Democrats, including a state delegate who last week accused Israel of fostering “fossil fuel” wars. That delegate was defeated in a primary and will no longer be in office come January.