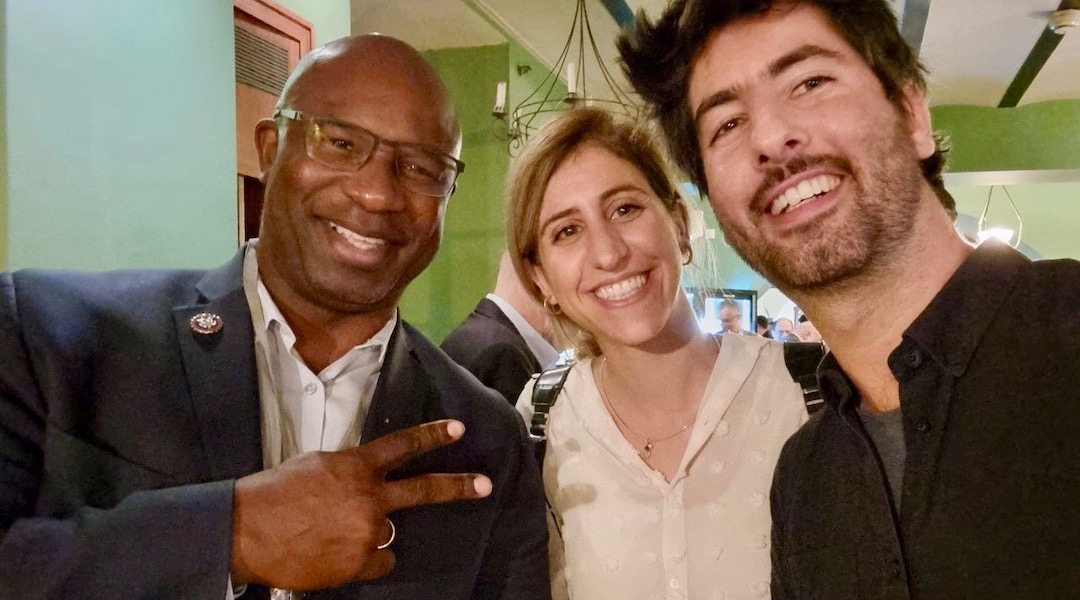 Rep. Jamaal Bowman, D-Bronx/Westchester, left, meets with Sally Abed and Alon-Lee Green of Standing Together, a progressive Jewish-Arab grassroots movement, during his visit to Israel and Palestinian-controlled areas as part of a Congressional delegation arranged by J Street, Nov. 8, 2021. (Via Twitter)
Advertisement

Good morning, New York. Today is the 83rd anniversary of the start of Kristallnacht, the violent antisemitic pogrom that augured the Holocaust. Read a history of Kristallnacht from our colleagues at My Jewish Learning.

ON A MISSION: Rep. Jamaal Bowman, D-Bronx/Westchester, met with Israeli Foreign Minister Yair Lapid as part of a Congressional delegation brought to Israel by J Street. (Times of Israel)

ROY FAMILY VALUES: The HBO series “Succession” introduced a Jewish character, played by Queens native Adrien Brody. The actor, who won an Oscar for his portrayal of a Holocaust survivor in “The Pianist,” also appears in Wes Anderson’s new film, “The French Dispatch.” (JTA)

JACKPOT: Gershon Distenfeld, an Orthodox Jewish investment manager who recently moved from Bergenfield, New Jersey, to Hollywood, Florida, was crowned champion at the 2021 World Series of Poker $1,500 Shootout No-Limit Hold’em event in Las Vegas. He will donate his $204,063 in winnings to charity. (Poker News)

Brooklyn native Stuart Schoffman, a screenwriter, journalist and translator  of some of Israel’s greatest writers — including David Grossman, A.B. Yehoshua and Meir Shalev — died Sunday in Jerusalem. He was 74. Schoffman was a founding writer and columnist for The Jerusalem Report and a popular lecturer. A graduate of Brooklyn’s Yeshivah of Flatbush who moved to Israel in 1988, he combined Jewish erudition with keen reportage and analysis of politics, religion and culture. (Times of Israel)

Miriam, an Israeli restaurant with a flagship in Park Slope, is opening a second location at the corner of 74th and Amsterdam on the Upper West Side. (West Side Rag)

Join the Museum of Jewish Heritage for a program exploring the forgotten story of Herschel Grynszpan, whose assassination of Nazi diplomat Ernst vom Rath would later be used as justification for Kristallnacht. The program will include a discussion between Jonathan Kirsch, author of “The Short, Strange Life of Herschel Grynszpan: A Boy Avenger, a Nazi Diplomat and a Murder in Paris,” and Alan E. Steinweis, professor of history and Raul Hilberg Distinguished Profesoor of Holocaust Studies at The University of Vermont. Register here. 2:00 p.m.

YI Love Jewish presents a day of events commemorating Kristallnacht, beginning at 11:00 a.m. with a  virtual lecture presented by Robert Watson, a professor of American Studies at Lynn University in Boca Raton, Florida, and ending with a concert at 9:00 p.m. focused on the Jewish world in wartime Europe and the relationship between Jews and God in Holocaust literature and music. To view these free events live and via replay, go to YouTube or Facebook.

Lithuanian-Israeli artist David Labkovski documented history through art as a way to bear witness to the past. Join the Melton School of Adult Jewish Learning in commemoration of Kristallnacht for a lecture and workshop about his life and legacy. Register here. 7:00 p.m.

Join the Jewish Future Pledge for a webinar with Elie Wiesel’s son, Elisha Wiesel, and grandchildren on how the Wiesel family is working to continue the Nobel Laureate’s legacy. Elisha will also discuss the recent unveiling of a carving of his father at the Washington National Cathedral, the first Jewish leader to receive the honor. Register here. 8:00 p.m.

Photo, top: Rep. Jamaal Bowman, D-Bronx/Westchester, left, meets with Sally Abed and Alon-Lee Green of Standing Together, a progressive Jewish-Arab grassroots movement, during his visit to Israel and Palestinian-controlled areas as part of a Congressional delegation arranged by J Street, Nov. 8, 2021. (Via Twitter)