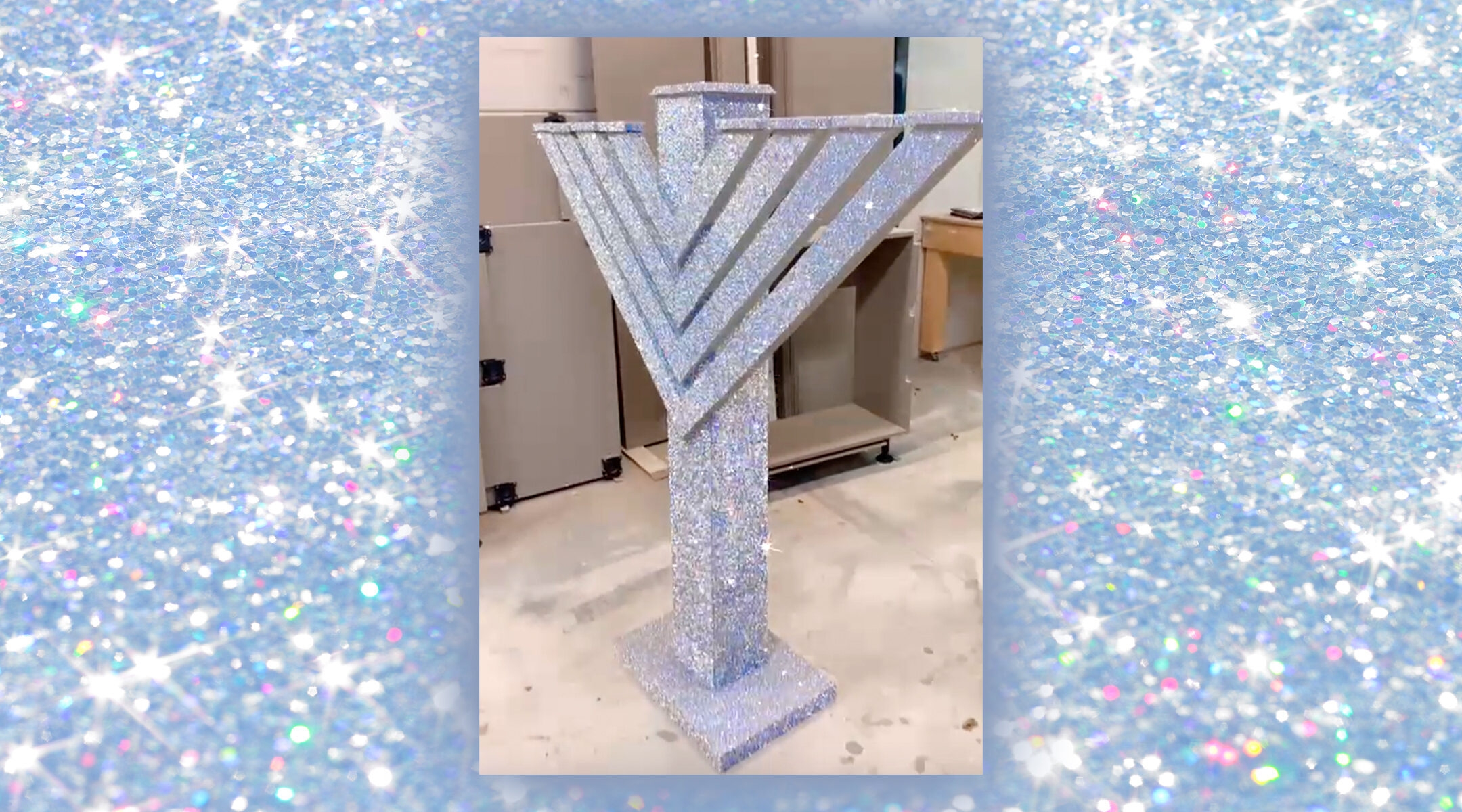 The Liberace-style menorah of Amsterdam in a warehouse during its construction in Amersfoort, the Netherlands, Dec. 3, 2021. (Barry Mehler)
Advertisement

AMSTERDAM (JTA) — A historic menorah that was retired from show business amid fears for its integrity — and bickering within the Dutch Jewish community over who has the right to use it — is getting a rhinestone-studded replacement.

A public candle-lighting is a major part of Amsterdam’s annual Hanukkah concerts, held at the city’s Royal Concert Hall, or Concertgebouw.

Spurred by a Jewish immigrant from New York who dreamed of replicating the communal experiences he had there, the concerts resumed in 2015 after being interrupted by the Holocaust, in which three quarters of Dutch Jews were murdered. From then until 2019, the lighting used a 123-year-old silver menorah that stands 8 feet tall and features an intricate design of eight bells and more than 150 delicate floral reliefs.

That year, the Jewish Community of Amsterdam, a nonprofit representing Orthodox Dutch Jews, decided to stop loaning out the menorah, itself a replica of an even older and more significant one.

This week, its replacement will be revealed. The modernized interpretation of the culturally significant and expensive object won’t be used in public, because the Hanukkah concert was canceled due to rising COVID-19 cases in the Netherlands.

But it will get a screen debut during an online concert Sunday, and organizers hope its hundreds of thousands of rhinestones will add bling, levity and pizzazz to the cherished communal tradition when concerts are again able to take place.

“It’s the biggest Liberace hanukkiah you can ever imagine,” Barry Mehler, the Hanukkah concert’s organizer, told the Jewish Telegraphic Agency, referring to the American performer whose piano was famously studded with rhinestones.

The menorah that has been retired from public service is historically significant — and quite valuable.

Known as the Rintel Copy Menorah, it is an exact replica of the even older and more expensive Rintel Menorah, which was built 268 years ago. Appraised at $563,000, the original Rintel recently received a new base that likely increases its price tag even further, making it by far the world’s priciest Hanukkah menorah. (Two runners up are also Dutch.) It was bought by the government in 2016 and is on permanent loan at the Jewish Historical Museum of Amsterdam.

To Dutch Jews, the original Rintel, named after philanthropist Sara Rintel, represents a golden age in which Ashkenazi Jews sought to match the opulence of the older and wealthier Portuguese community for which Amsterdam is famous. It was so precious that in 1898 a replica was made for Amsterdam’s Dritt Synagogue, to save the original from the wear and tear of ceremonial use.

It was that replica that was used at the city’s Hanukkah concerts once they resumed in 2015. But it needed to be taken apart for transport and reassembled, and its design — with a hinged shamash, the candle used to light the other — made moving it to the Royal Concert Hall a risky endeavor.

The decision to stop lending out the Rintel Copy also came amid a split in the Hanukkah concert community. After the 2018 concert, organizers splintered into two groups because of artistic differences and — as is common in small Jewish communities — personal clashes.

That was the year that a male soprano performed while wearing a diamond tiara and pink socks, and Mehler joked about the fashion choice onstage. Mehler, 56 and a cantor for several Orthodox synagogues, came to Amsterdam in 1989 because it was “mecca for gay people,” he told the Jewish Telegraphic Agency last year, and he had successfully mixed serious singing with stage acts that pushed the boundaries of what the city’s more religiously conservative Jews would tolerate.

Mehler’s pronounced style was part of the reason that this year, Amsterdam had been scheduled to have two separate Hanukkah concerts in the Royal Concert Hall. One, by the Chanukah Concert Foundation, would have taken place Sunday. The other, put on by Mehler’s Jewish Music Concerts Foundation, was set for this coming Sunday.

Both live performances were canceled because of the pandemic. But Mehler’s group will stage its show virtually — and give Dutch Jews their first look at the new menorah.

“The Rintel design is so special that we wanted to design something so over the top that it would capture the eyes of the audience in a different way,” he said.

The ingredients for doing so include 313,000 rhinestones, with a combined weight of 10 pounds, and a tall metal structure with nine branches. The project cost a few thousand dollars, Mehler said.

Is a menorah with fake diamonds glued to its frame a satisfactory replacement for the intricately-designed copy Rintel, with its 18th-century design? Mehler believes so.

“The Rintels are beautiful, and you can’t compete with them,” he said. “But they’re also essentially flamboyant, made to awe and impress in their classy way. The new Amsterdam Hanukkah Concert Menorah we’re making will achieve the same effect – by different means.”