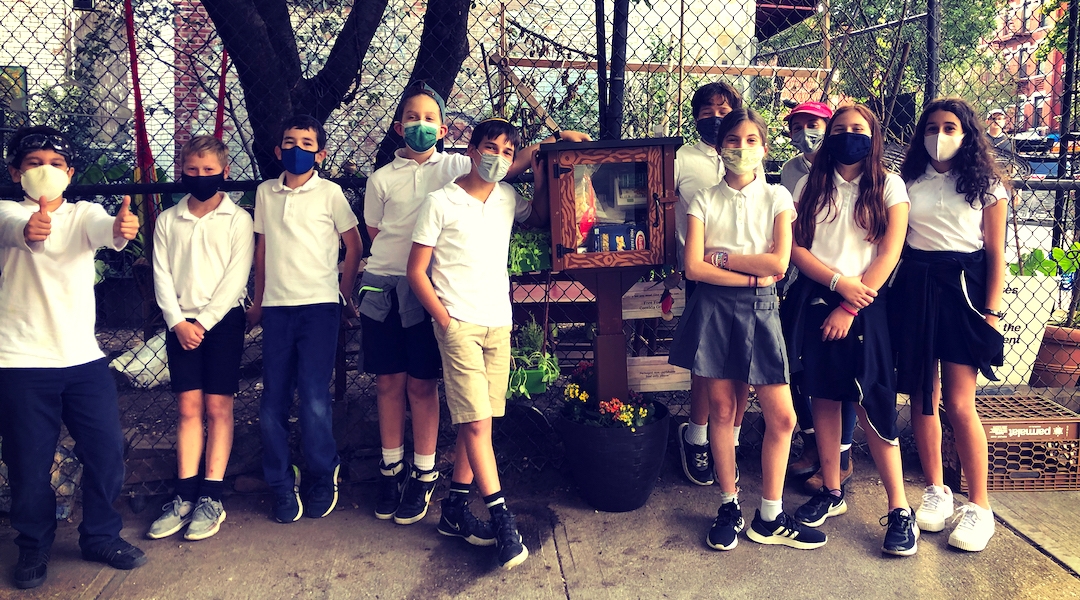 Students at Schechter Manhattan pose in front of the pantry box they created and installed on the southeast corner of 107th Street and Columbus Avenue, stocked with food items for the area’s homeless and food-insecure population. (Courtesy)
Advertisement

CRIME WATCH: A 26-year-old Hasidic man was chased by two men and struck in the head in Williamsburg Sunday night. Police are treating it as a possible hate crime because the victim was wearing traditional religious garb. (New York Post)

HE TRIED: Alexandria Ocasio-Cortez  blew off Bill de Blasio’s Israel advice, Politico reports. The former mayor and his staff “repeatedly” urged the Bronx and Queens progressive to forge better ties with city Jewish leaders troubled by her stance on Israel, “until finally accepting her apparent disinterest in his advice.”

REMEMBERING: Elihu Katz was a communications theorist but he left a concrete legacy in Israel: As director of its state TV channel from 1967-69, the New York native helped bring regular television broadcasts to the country. Katz, who lived most of his life in Jerusalem, earned his B.A., M.A. and Ph.D. at Columbia University. He helped to found Hebrew University’s Department of Communication. Katz died in Jerusalem on Friday. He was 94. (Jerusalem Post)

Students at Schechter Manhattan created and installed a pantry box on the southeast corner of 107th Street and Columbus Avenue, stocked with donations of non-perishable food items for the area’s homeless and food-insecure population. The yearlong project grew out of the school’s Lieberman Family STEAM program, in which students at the K-8 day school applied principles of science and math to develop and test their designs. Visit here to learn more about the Schechter Manhattan “107th Street Food Pan-TREE” or to make a donation.

Dr. Regina Stein leads the first class in a course on the poetry of Yehuda Amichai, the most popular Israeli poet of the second half of the 20th century. The classes will be held over Zoom every Tuesday through Feb. 22 and may be taken separately. Register for these classes from the Museum at Eldridge Street here. Noon.

The Museum of Jewish Heritage hosts a conversation about the politics of memory with leaders in Polish civil society, including Dr. Jan Grabowski, a historian sued for his research into the Shoah; Dr. Dariusz Stola, the former director of POLIN: Museum of the History of Polish Jews; and Konstanty Gebert, a journalist and founder of the Polish Jewish monthly Midrasz. The discussion will be co-presented by Descendants of Holocaust Survivors (2G Greater New York) and moderated by Rachel Donadio, a contributing writer for The Atlantic. Register here. 2:00 p.m.