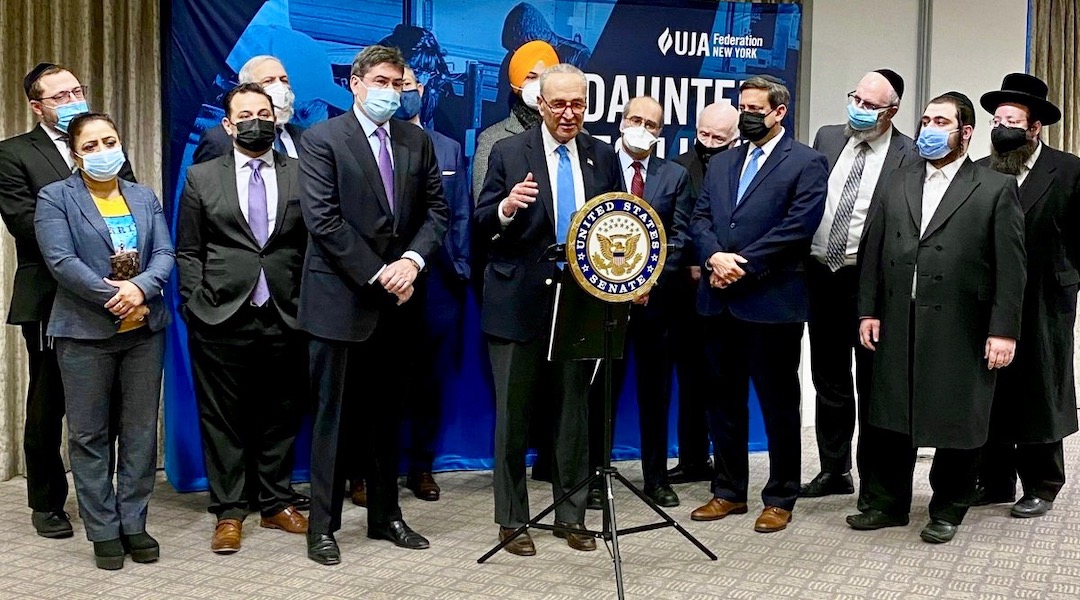 Sen. Charles Schumer (D-NY), center, flanked by area religious leaders at the Manhattan headquarters of UJA-Federation of New York, called on Congress to approve $360 million for the Nonprofit Security Grant Program, Jan. 26, 2022. UJA CEO Eric S. Goldstein, front row, third from left, said that "security enhancements put in place with these funds can and will save lives." (Courtesy UJA-Federation)
Advertisement

Good morning, New York. Today is the 77th anniversary of the liberation of the Nazi death camp of Auschwitz, which the world marks as International Holocaust Remembrance Day. Read how the day is being commemorated by governments, international NGOs, Jewish groups and even MTV.

See you in court: A Jewish educator says she was fired from her job at the Westchester Reform Temple because she espoused ant-Zionist beliefs online. Was the synagogue intolerant of ideological diversity, as her lawsuit asserts, or within its rights in upholding one of its core tenets? Julia Gergely reports.

Supercentenarian: Rose Girone is known for the successful knitting shops she ran in Rego Park and Forest Hills, Queens. As she celebrates her 110th birthday, relatives and friends tell The New York Jewish Week that knitting is not just her livelihood, but a craft that helped her survive as a Jewish refugee in Shanghai.

Appointments: The Biden administration plans to name Abraham Foxman, the former national director of the Anti-Defamation League, to the U.S. Holocaust Memorial Museum Council. Also on the list of 12 appointees, obtained by the Jewish Telegraphic Agency, is Susan K. Stern, past chair of the board of UJA-Federation of New York.

On the block: A painting looted by the Nazis and reclaimed by the owner’s descendants will be auctioned at Sotheby’s in New York City today. (New York Post) 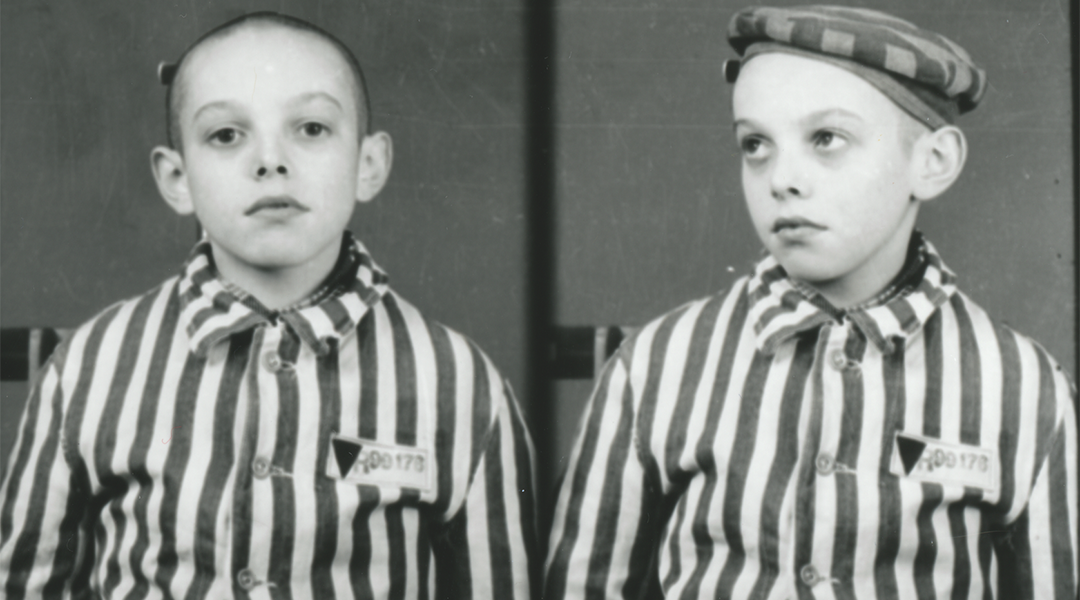 “Never Forget Your Name: The Children of Auschwitz,” a new book by the German author Alwin Meyer, weaves together the biographies of 27 people who were born at Auschwitz or were children when they arrived at the concentration camp. (Photo above courtesy of State Museum Auschwitz-Birkenau)

TikTok announced new features intended to reduce the spread of misinformation about the Holocaust shared and to direct users to trustworthy sources about the subject.

CNN reports on a letter written by a Holocaust survivor, informing her sister that she had survived, that was returned to a family descendant after resurfacing at a flea market in New York.

The Museum of Jewish Heritage presents readings of three short stories: “The Road of No Return” by Rachel Häring Korn, read by Jackie Hoffman; “The Shawl” by Cynthia Ozick, read by Mili Avital; and “A Wedding in Brownsville” by Isaac Bashevis Singer, read by Eleanor Reissa. Register here; this virtual program will be available all day.

The Consulate General of Italy in New York will hold a public reading of the names of the Jews deported from Italy and the Italian territories, today from 9:00 a.m. to 2:00 p.m. outdoors in front of the consulate at 690 Park Avenue. Members of New York City Opera and National Yiddish Theatre Folksbiene will join the commemoration.

The New York Public Library presents a virtual conversation with the authors of two new memoirs of families reshaped by the Holocaust: Eleanor Reissa, author of “The Letters Project: A Daughter’s Journey,” and sisters Andra and Tatiana Bucci, authors of “Always Remember Your Name: A True Story of Family and Survival in Auschwitz.” Sign up here. 1:00 p.m.

The Paley Center for Media hosts a live broadcast in honor of International Holocaust Remembrance Day: “Media’s Role in Helping Us Talk About the Holocaust.” Panelists include survivor Michael Bornstein, former Sen. Christopher Dodd, Doron Krakow, the president and CEO of the JCC Association of North America and Maria Zalewska, executive director of the Auschwitz-Birkenau Memorial Foundation. Tonight, 7:00 p.m.

WHAT ELSE IS ON TODAY

What does it mean to be “a woman of valor,” and how can the power of art help us interpret an ancient poem for our own times? Explore Eshet Chayil, a poem from the Book of Proverbs, with musician and Torah teacher Alicia Jo Rabins, and then pick up a pen, pencil, watercolor or instrument and add your own interpretation to the canon. Register for this My Jewish Learning event here. 3 p.m.