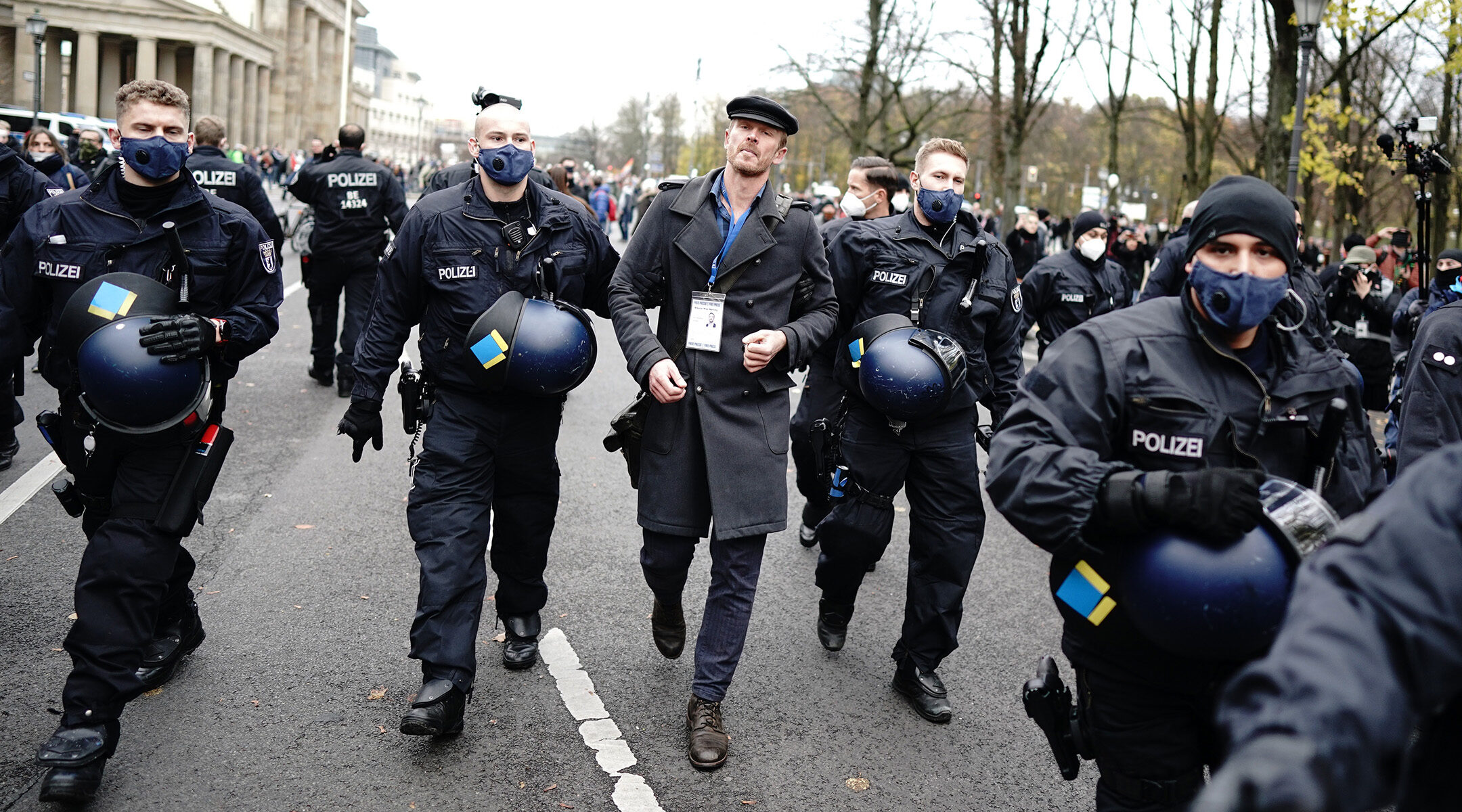 Right-wing extremist Nikolai Nerling, known as the video blogger "Der Volkslehrer" (The People's Teacher), is led away by the police in a demonstration against COVID restrictions in Berlin, Nov. 18, 2020. (Kay Nietfeld/picture alliance via Getty Images)
Advertisement

(JTA) – A far-right German extremist who has been convicted of denying the Holocaust is taking shelter in Brazil.

Nikolai Nerling, 41, told Brazilian news site Globo that he fears he will be arrested if he returns to Germany.

The Berlin public prosecutor’s office declined to say whether Interpol was notified of his presence in Brazil or whether an extradition request would be filed.

Nerling was fired in May, 2018 from a Berlin elementary school where he taught from 2009 to 2018 after a report in a local newspaper showed that he was disseminating neo-Nazi content.

In December, he was fined 6,000 euros for denying the existence of the Holocaust in front of a group of students visiting the Dachau concentration camp.

He arrived in Brazil on a tourist visa in November 2021 and has spent the last few months touring cities in southern Brazil and creating more content for his channels, often denying the Holocaust. In one video recorded in Pomerode, in the Santa Catarina region, Nerling can be seen removing “FCK NAXS” from a graffitied wall together with another man.

Because YouTube has blocked his channel several times, the majority of his videos are published on his Telegram channel where he has over 30,000 subscribers. He funds his work with donations from his followers.

Michel Gherman, an advisor to the Instituto Brasil-Israel (IBI) and professor in the sociology department at the Federal University of Rio de Janeiro, suspects that Nerling chose the south of Brazil, specifically Santa Catarina, because of the area’s history of having a large German immigrant population.

“We think it makes sense from his racist and Nazi perspective to have searched for a population of German origins,” Gherman told the Jewish Telegraphic Agency.

Nerling considered heading to Paraguay next, following the lead of the over 1,000 Germans who have moved to the South American country in the last year to avoid Germany’s strict COVID-19 rules. However, Paraguay updated their entry requirements on Jan. 10, 2022, now requiring vaccination from foreign travelers not residing in the country. Nerling, who is unvaccinated, is afraid he won’t be able to get in.

For now, he has decided to wait and see how things develop in Brazil, though his tourist visa expires after 90 days. Little is known about what, if any, course of action the government will take regarding Nerling’s presence.

Gherman said that Jewish groups have been raising the alarm about close ties between Brazilian neo-Nazi groups and the government of President Jair Bolsonaro. Last year, he extended a warm welcome to a lawmaker from Germany’s far-right AfD party who is the great-granddaughter of a prominent Nazi. One of his advisers made a sign associated with white supremacy during a legislative session.

“We think there should be a stronger pressure, a condemning, from past victims of Nazism, in relation to the ties between the current administration with nazis,” said Gherman.

Brazil has an infamous past as a haven for Nazis looking to hide from persecution after World War II.

Also this week, the presenter of a popular podcast said he was in favor of a legally recognized Nazi party in Brazil.