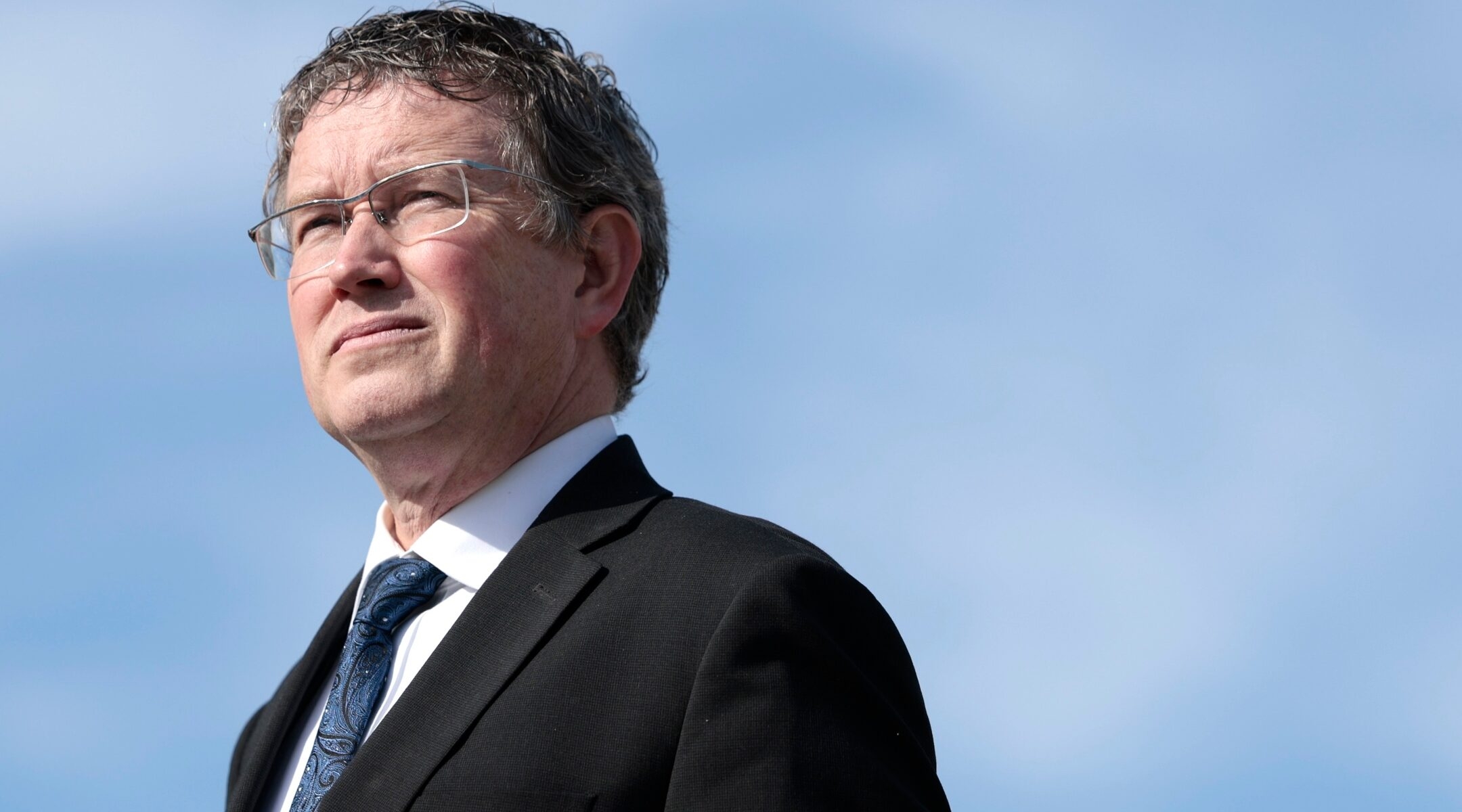 WASHINGTON (JTA) — Donald Trump endorsed Thomas Massie, a Kentucky Republican congressman whose opposition to a Holocaust education bill helped earn him the rare distinction of being an incumbent criticized by the Republican Jewish Coalition.

Massie is one of a number of Republicans the former president is backing in the primaries ahead of this year’s midterm congressional elections in a bid to prove he still has sway in the party. Trump has also endorsed Marjorie Taylor Greene of Georgia, another incumbent Republican the RJC’s affiliated political action committee has opposed in a primary.

“Thomas fights hard to Protect your Liberties, especially the First and Second Amendments, which are under siege by the Radical Left,” Trump’s political action committee, Save America, said in a statement Tuesday that echoed his idiosyncratic use of capital letters. “Strong on the Border and our Military and Vets, Thomas Massie has my Complete and Total Endorsement!”

The RJC also backed Massie’s primary opponent in 2020 because the congressman was all that stood between the government and a $2 trillion coronavirus pandemic stimulus package. It went through eventually, but Trump, who was president at the time, then called Massie a “third-rate grandstander.”

The RJC already had its sights set on Massie: He had opposed funding for Holocaust education and a resolution that condemned Israel boycotters. More recently, he was the only Republican who opposed $1 billion in additional funding to replenish Israel’s Iron Dome anti-missile system after it was depleted in the Gaza conflict a year ago. Massie is a libertarian and cites his opposition to government overreach in all of these votes.

The RJC PAC also opposed Greene in 2020, when she was not an incumbent, and also spoke out against her after she was elected because she was peddling tropes Jewish groups said were antisemitic. They are backing her opponent this cycle.

The RJC’s PAC has yet to say whether it will support opponents of Massie this cycle. So far, RJC PAC’s list of endorsees include Trump critics like Reps. Peter Meijer of Michigan and Nancy Grace of South Carolina, as well as fervent Trump supporters like Rep. Nicole Malliotakis of New York and Sen. Ron Johnson of Wisconsin.

Trump is focusing particularly on his favored candidates who face primary challenges backed by the remnants of the establishment that he crushed in his rise to power in 2016. In Ohio, the candidate he backed in a Senate primary, investor and author J.D. Vance, won over candidates more aligned with the old guard, as well as Josh Mandel, a Jewish former state treasurer who had enthusiastically embraced the Trump doctrine but failed to secure the former president’s endorsement.

It is rare for a Jewish partisan group to side against an incumbent in a primary. In one notable case, political action committees affiliated with the Jewish Democratic Council of America and with the Democratic Majority for Israel are siding with Rep. Haley Stevens in her Michigan primary contest against Rep. Andy Levin, who is Jewish. But both are incumbents and are facing each other because of redistricting.

Stevens is close to the center-right pro-Israel establishment, while Levin is aligned more with liberal Jewish groups that say their support for Israel comes with trenchant criticism.