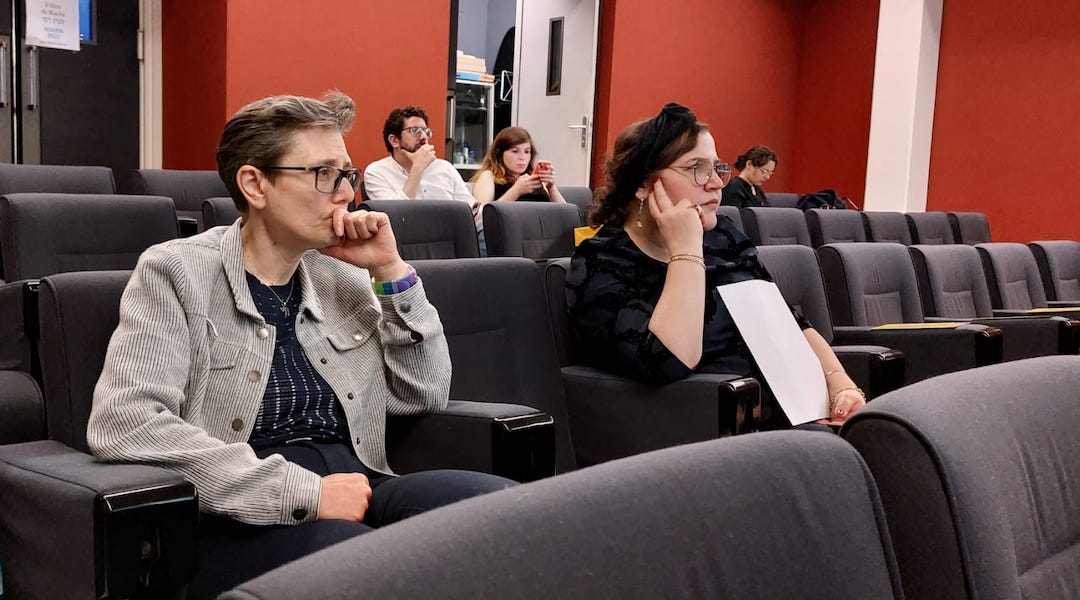 Participants look on at a session of the Filles de Rachi conference in Rouen, France, May 23, 2022. (Filles de Rachi)
Advertisement

PARIS (JTA) — In 2019, at a Jewish conference in Troyes, France, Myriam Ackermann-Sommer did something quietly historic: She read from the Torah in an Orthodox prayer group.

Ackermann-Sommer was in charge of facilitating the minyan — or the 10-person Jewish prayer quorum, traditionally male-only — at the cross-denominational conference, titled “Do Women Have To Disobey To Be Leaders?” and organized by Filles de Rachi, or Daughters of Rashi, a reference to the medieval French sage born Shlomo Yitzhaki. Troyes was his birthplace.

“There’s a lot of questioning our motives in the Orthodox world, and elsewhere, like saying, ‘Why do you do that? Is it just feminism?’” she told the Jewish Telegraphic Agency. “No, I think it’s Judaism and it’s been there all along.”

In the United States especially, the roles of women in Judaism have expanded in all denominations, including strictly gender-conscious Orthodoxy. In France, however, where Orthodoxy has long been the dominant Jewish denomination, there are only five female rabbis in a country with over half a million Jews.

A second edition of the conference — imagined as a biannual event, but delayed due to COVID-19 — took place last month in Rouen, the city in Normandy known for its medieval, Romanesque yeshiva (Europe’s oldest and discovered in the 1970s). Panelists took on an array of topics, from the COVID pandemic to the war in Ukraine to the role of France in Jewish history, and vice versa. Between 70 and 80 people attended, down from 200 in 2019 because of COVID precautions.

Conference-goers discussed topics that engage all French Jews, especially their sense of security in a country struggling with diversity and integration. “I often think when you’re Jewish in France, they always ask where you came from,” said Manon Brissaud-Frenk, a student at Bebe’s Rabbinical School of Paris and a Daughters of Rashi co-president. “And I always find it quite difficult because if I look at it personally, it’s been more than a century. I’m French. Full stop.”

But the conference also continued the theme of greater inclusion for women in the Jewish organizational and theological worlds. One well-known attendee was Reform Rabbi Delphine Horvilleur, who has gained international acclaim for her books and media presence.

“The question of the advance of women in the political world is the opposite of the pawn in the game of chess: the right of women can go backwards,” warned Horvilleur in her talk with Danielle Cohen-Levinas, a French philosopher and musicologist with a specialty in Jewish philosophy.

Also in attendance were figures from the Israelite Central Consistory of France, or Consistoire, created by Napoleon Bonaparte in 1808. Many women hold leadership and teaching positions within the largely Orthodox body, which continues to play an important role in the direction of French Judaism, but it does not recognize women rabbis. Rosine Cohen, who has been teaching for years at the Consistorial Victoire synagogue in Paris, shared a workshop with Javier Leibiusky, who researches the immigration of Ladino, or Judeo-Spanish, from the East to Buenos Aires.

“When I was young, we studied women in the Talmud, but it was never an issue,” Cohen said during their talk.

“Even if we don’t have the same way of interpreting the text, even if we try to do it in a different way, with maybe different roles, there is no reason that in a society like France, women should find themselves at some point choosing between playing minor or major roles, no matter what space they are in,” Brissaud-Frenk said.

The mix of topics, the array of religious denominations represented and the focus on women made for a historic combination in the eyes of Laura Hobson Faure, chair of the modern Jewish history department at the University of Paris Panthéon-Sorbonne. She said that while these groups might come together at a rally for Israel, for example, gathering for an overtly religious event is rare.

“What’s interesting is that usually Orthodoxy struggles with the notion of pluralism in Judaism,” said Hobson Faure. “The fact that women are creating this pluralistic space in France where the different tendencies of Judaism are represented is quite new.”

Brissaud-Frenk was part of the board directors of the Maison Rachi, a cultural center that aims to preserve Rashi’s legacy. She was inspired by one of the lines in Rashi’s siddur, or prayer book, concerning the education of women: “If she wants to, nothing can stop her.”

The concept led to a discussion with Bebe’s husband, Rabbi Tom Cohen of the French-American liberal Kehilat Gesher synagogue in Paris. Brissaud-Frenk and Cohen decided to bring together female rabbis and Jewish scholars to exchange, study and learn — and the conference was born.

“I’ve gone to way too many conferences where all the talking heads were male rabbis who talked about women and Judaism,” said Cohen, who is a Daughters of Rashi honorary co-president. “I thought that would be great because we’re now at this stage in the development that there’s enough women who have come through the studies, universities, that we have scholars of high quality in all of the different [Jewish] movements.”

The conference has inspired women outside of the more liberal movements too. Ackermann-Sommer, who also spoke at this year’s conference, is studying in New York City with two other French women at Yeshivat Maharat, which confers semicha — ordination — to Orthodox Jewish women. 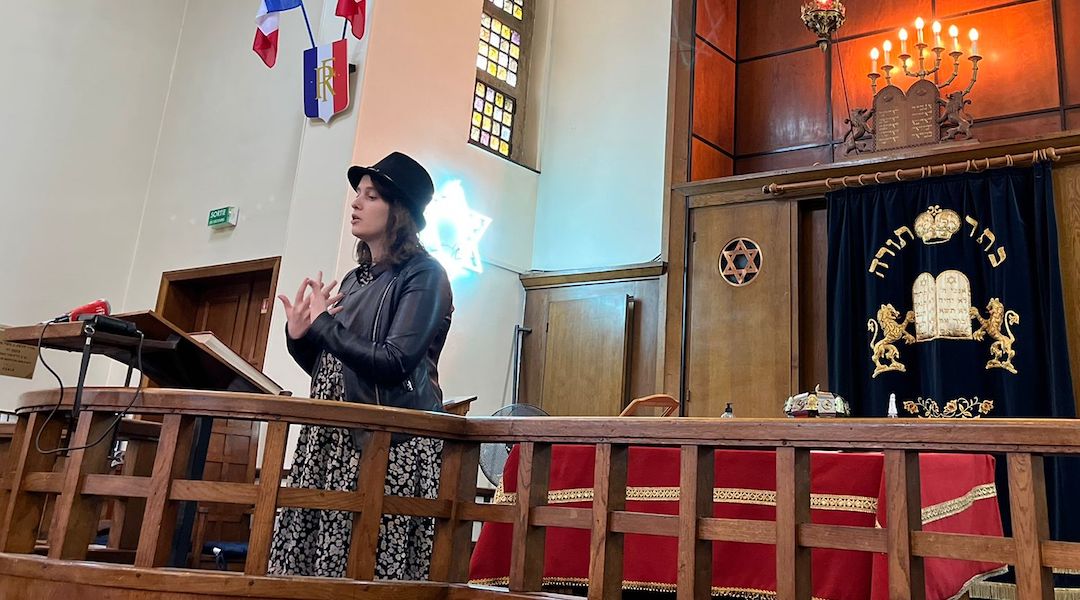 Myriam Ackermann-Sommer speaks at the conference in the Synagogue of Rouen, May 23, 2022. (Filles de Rachi)

She is also pursuing a Ph.D. with a focus on Jewish-American literature, and her podcast “Daf Yummy” — a play on Daf Yomi, the practice of studying a single page of the Babylonian Talmud per day — compares Jewish teachings to classic literature and popular culture, from Plato’s “Symposium” to “Star Wars: Revenge of the Sith.”

With her husband Émile Ackermann, she also runs a Modern Orthodox group called Ayeka, which promotes the democratization of Jewish study. One Ayeka program focuses on studying Jewish texts that are usually reserved for men. Its name, Kol-Elles, is more wordplay — in this instance on the word kollel, the term for an institute of full-time, intensive Jewish study, using “elle,” the French female pronoun. So far, about 100 Jewish women, ages 25 to 60, have taken part in the program.

“I just think that male, bearded rabbis are simply not enough anymore,” she said. “It used to be the case that these were the types of figures that we wanted to look up to, for decades, for millennia, probably. But now we need women to represent women and to speak to women and to men as well.”