The US and Israel want to unite the Middle East against Iran. Iraq could pose a problem. 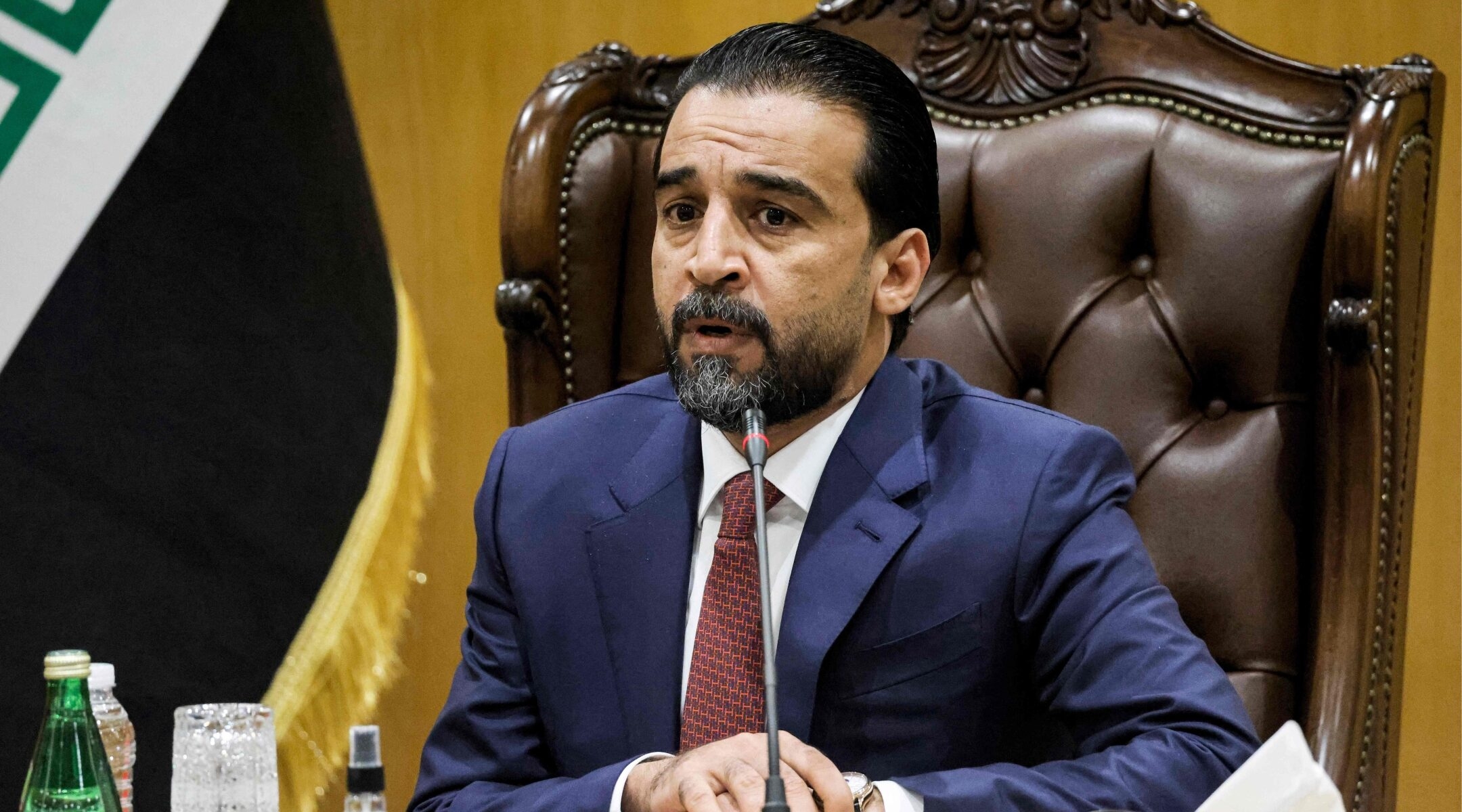 WASHINGTON (JTA) — It has become a kind of mantra in Washington and Jerusalem: Integrate much of the Middle East, including Israel, into a single security system to keep Iran in its place.

The issue came up as soon as President Joe Biden landed Wednesday at Ben Gurion airport in Israel for his first visit as president and his 10th since 1973.

“We will discuss building a new security and economy architecture with the nations of the Middle East, following the Abraham Accords and the achievements of the Negev Summit,” Israeli Prime Minister Yair Lapid told Biden, referring to the 2020 normalization agreements with some of Israel’s Arab neighbors and a follow-up meeting earlier this year. “And we will discuss the need to renew a strong global coalition that will stop the Iranian nuclear program.”

The prospects for an anti-Iran alliance look good. There’s major buy-in from both parties in Congress, the Biden administration is on board and some of Israel’s neighboring Arab nations are at least intrigued, if not enthusiastic.

But for strategic purposes, every concept of the alignment includes Iraq, a country that just formally outlawed normalization with Israel — and made it punishable by death.

In May, the Iraqi parliament overwhelmingly passed a law broadening Saddam Hussein-era strictures on dealing with Israel. The law now applies to any interactions with Israeli officials on social media, and to interactions with organizations or businesses that deal with Israel. The very name, “Law Criminalizing Normalization with the Zionist Entity,” is a pointed rebuke of the Abraham Accords, which normalized relations between Israel and the United Arab Emirates, Bahrain, Morocco and Sudan.

Westerners with ties to Iraq say the law is already having an effect. Iraqis who would comment on Israel-friendly social media sites have muted themselves, they say, and Iraqis who manage the properties of expatriate Jews say they have been threatened by other Iraqis.

“During the time of Saddam Hussein there was in 1969 passed just one article in the Iraqi penal code that says that if you belong to a Zionist or Freemason institution you face execution,” an Iraqi official with knowledge of the parliamentary process told the Jewish Telegraphic Agency.

“Now for the first time, there is a separate law that criminalizes any relationship with Israel or with Israeli citizens, not just political or defense but also NGOs, charitable organizations, mercantile relationships, will automatically trigger either execution or life in prison,” said the official, who spoke anonymously for security reasons. “In addition, the cultural impact of the law as a matter of social conditioning is to greenlight the militias” allied with Iran “to preemptively and extrajudicially attack anyone, including storming their homes, attacking them in the street, who are suspected of having any relations along these lines and say that the attack came from the people.”

But because of its proximity to Iran and the longstanding U.S. presence in the country, Iraq is still a crucial piece of the puzzle according to some American lawmakers.

Last month, a bipartisan group of lawmakers advanced a bill that would set up a regional defense arrangement that names Iraq, Israel and the United States among a set of 10 nations. The office of Joni Ernst, a Republican senator in the bipartisan group, said in an emailed statement to the Jewish Telegraphic Agency that although Iraq’s law is regrettable, the country remains a critical component of U.S. security in the region.

“It cannot go unnoticed that Iraq is still a valued partner in the region for the U.S. and hosts U.S. servicemembers and foreign service officers who are regularly under attack by Iranian proxies operating in the country,” an Ernst spokesman said. “Integrating Iraq into a regional missile and drone defense framework makes sense for the safety of U.S. servicemembers and provides a forum for further cooperation with Israel and against Iran.”

Still, the group, co-led by Democratic Sen. Jacky Rosen, has raised an alarm about Iraq’s Israel law and asked Biden to push Iraq to roll back the law while he is in the region.

“We respectfully encourage you to raise Iraq’s antinormalization law during your visits with foreign leaders and make clear the United States’ resolute condemnation,” reads a letter sent Tuesday to Biden spearheaded by Rosen, Ernst, and Reps. Brad Schneider, a Democrat, and Cathy McMorris Rodgers, a Republican.

“Iraq is an important and valued security partner,” it continues. “Nevertheless, this law jeopardizes freedom of expression, promotes an environment of antisemitism, and could deter other states that have yet to normalize relations with Israel.”

Biden rounds out his trip with a stop in Saudi Arabia, where he will attend a session of the GCC+3, the six nations of the Gulf Cooperation Council plus Egypt, Jordan and Iraq. Biden wrote in a Washington Post op-ed ahead of his trip that integrating Israeli and Arab nations into defense and economic structures would be a priority.

“I will also be the first president to fly from Israel to Jiddah, Saudi Arabia. That travel will also be a small symbol of the budding relations and steps toward normalization between Israel and the Arab world, which my administration is working to deepen and expand,” Biden wrote. “In Jiddah, leaders from across the region will gather, pointing to the possibility of a more stable and integrated Middle East, with the United States playing a vital leadership role.”

White House officials did not respond when asked whether Biden would bring up the anti-normalization law with Iraqi officials at the GCC+3 meeting.

There is evidence that Iraqi citizens are not as resolute as their lawmakers in opposing Israel, particularly in the semi-autonomous Kurdish region, where Israeli-Kurdish trade has quietly existed for years.

Last September, hundreds of Iraqi civic leaders and activists defied the certain threat of prosecution to attend a conference that called on the country to establish full diplomatic relations with Israel. The Center for Peace Communications — a U.S. think tank that promotes Iraqi-Israeli recognition and is chaired by Dennis Ross, a former Middle East official under multiple U.S. presidents — helped organize the event.

An Israeli Foreign Ministry Facebook page in the Iraqi Arabic dialect has 660,000 followers — down from close to 800,000 followers since the law was passed. (Pro-Israel officials say many of those followers switched to following a pan-Arab page, which placed them less at risk.)

In an interview, Tallal al-Hariri, who founded a pro-Israel Iraqi political party and who has since fled into exile, say Iraqis are aware of the outsized role Iraqi Jews once played in the country and long for their return.

“A substantial number among the youth in particular want to see a reconnection with the Iraqi Jewish Diaspora and peace with Israel,” he said.

The Center for Peace Communications is advocating for international pressure on Iraqi lawmakers to roll back the anti-normalization measures. The think tank has in recent months focused its advocacy especially on Mohammed Al-Halbousi, the speaker of Iraq’s parliament, who was a major booster of the law but who is also seen in the West as an ally in containing Iranian influence in Iraq.

“Halbousi played a decisive role in whipping Sunni and tribal votes to ensure its swift passage,” Michael Nahum, the think tank’s chief operating officer, said in an op-ed in the Times of Israel. “Employing demagoguery and antisemitic language, he has far exceeded whatever realpolitik might have justified his involvement with the law, and now wants to export it across the region.”

An example was Halbousi’s appearance at a televised town hall last August, in which he pledged, “there will never be normalization with that usurping entity, never!” Speaking in October at a rally, he praised Saladin, the Muslim leader who repelled the Crusaders as “breaking the Zionists backs” and prayed for the day when “our armies will reach Israel.” To those who preached normalization, he said, “I’ll cut off their manhood.”

The failure to forcefully condemn Halbousi means “Israel’s most powerful supporters have acquiesced to his campaign against normalization and the many Arabs who want it,” Nahum wrote.

Halbousi is nonetheless seen in the West as a leader of Iraq’s substantial Sunni minority who is key to limiting the influence of Iran. Secretary of State Antony Blinken called Halbousi to congratulate him on his reelection as speaker in January. Halbousi was to have visited Washington last month but canceled because of political instability at home. During the Trump administration years, he met with then-Secretary of State Mike Pompeo.

When asked by the JTA what they made of Halbousi’s strident anti-Israel rhetoric, a number of U.S. officials sidestepped the issue.

The State Department pointed the JTA to a May statement that said “the United States is deeply disturbed by the Iraqi Parliament’s passage of legislation that criminalizes normalization of relations with Israel,” but did not mention Halbousi. Pompeo did not return multiple requests for comment. Spokesmen for Ernst and Rosen, the lead Senate sponsors of the DEFEND Act, condemned the Iraqi law, but also did not mention Halbousi when asked specifically about his role.

David Schenker, a senior fellow at the Washington Institute for Near East Policy, a think tank with ties to the U.S. and Israeli governments as well as multiple Arab governments, said Halbousi was hardly an outlier in a country where Iran retains enormous influence — and poses a lethal threat to anyone who hints at conciliation with Israel.

“There’s a lot of pressures on these folks,” Schenker said in an interview, referring to the threats that Iranian-backed militias put on Iraqi lawmakers. “I don’t think they should be given a pass. Nevertheless, we have to understand the situation they’re in.”

Israeli officials say they are counting on the long game: the momentum generated by a regional defense arrangement could eventually turn Iraq around, they say.

“We’re definitely concerned” by the anti-normalization law, one senior Israeli official told JTA. “I would ask a question: If Iraq joins” the regional arrangement, “does this annul the law criminalizing relations with Israel?”

Schenker, who was an assistant secretary of state responsible for the Middle East under the Trump administration, said there were positive signs in Iraq, including its engagement with U.S. allies such as Egypt and Jordan, and its goal to de-escalate tensions between Saudi Arabia and Iran.

But, he added, “you have a central government that can’t exercise sovereignty” in the face of the country’s diverse political factions and Iranian influence. Plans for incorporating Iraq into the regional defense architecture are premature, he said.

“To think they could be part of this regional security architecture I think doesn’t represent what the reality is on the ground,” he said.